Inorganic light-emitting diodes (LEDs) are the essential components of many display and illumination technologies. However, the energy efficiency of LEDs suffers both at high power and at green wavelengths. Improving the efficiency of green LEDs is therefore a major goal of current research in solid-state lighting technology. Our recent findings predict that indium nitride nanowires just a nanometer wide are a promising solution to this ‘green-gap’ problem, and that changing the nanowire width or cross-sectional shape could tailor optical emission to other visible wavelengths.

Many approaches to bridging the green gap in LED technology focus on materials like indium nitride (InN) and gallium nitride (GaN).1 These semiconductors have direct band gaps near opposite ends of the visible spectrum (0.6eV in InN and 3.4eV in GaN). Mixing them in different ratios tunes the band gap between those of the pure materials, in principle achieving light emission of any color in the visible range. However, in practice, fluctuations in the alloy composition, lattice mismatch with the substrate, and strain-induced polarization fields severely limit the efficiency of InGaN-based LEDs.2 These issues are especially prevalent in alloys with composition ratios corresponding to green light emission.

To circumvent the problems faced by InGaN alloys, we explored the effects of extreme quantum confinement on nanowires of pure InN. Quantum confinement typically increases the optical emission energy of a semiconductor, and so we expected that the light emitted by InN could be boosted into the visible range in very small diameter nanowires. We found that InN nanowires approximately 1nm in diameter will emit green (2.3eV) or cyan (2.5eV) light, depending on the shape of the nanowire cross-section.3 Moreover, using a nanostructured pure-phase semiconductor instead of an alloy avoids many of the efficiency loss mechanisms occurring in InGaN alloys.

Visible-light emission from InN nanowires is possible because quantum confinement affects the optical emission energy in two ways. First, it increases the energy gap between valence and conduction bands from 0.6eV in bulk InN to 3.7 or 3.9eV in 1nm-diameter nanowires, depending on the nanowire cross-section shape (see Figure 1). Like the particle-in-a-box model of basic quantum mechanics, the increase in the band gap depends inversely on the diameter of the nanowire and the effective masses of charge carriers. In our case, the nanowires are sufficiently small in diameter and InN has such a small electron effective mass (0.07 mo, where mo is the free electron rest mass), that the size of the nanowire band gap is surprisingly large. 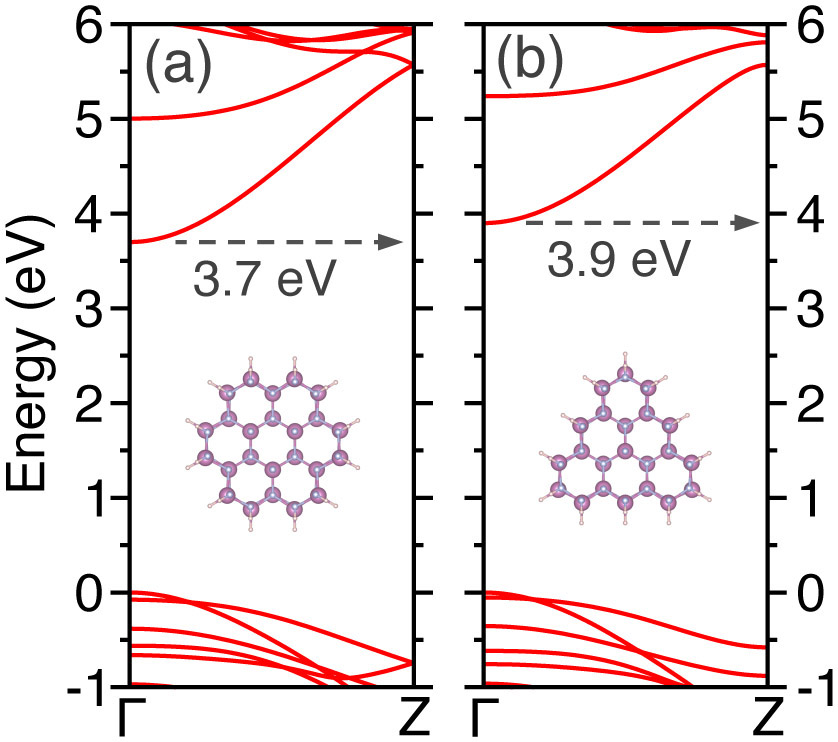 Figure 1. Electronic band structures of indium nitride (InN) nanowires with (a) hexagonal and (b) triangular cross-sections. Quantum confinement opens the band gaps to 3.7 and 3.9eV in the hexagonal and triangular nanowires, respectively. (Reprinted with permission.3 Copyright 2014 American Chemical Society.)

Inorganic semiconductors tend to have large dielectric constants, which screen the electrostatic attraction between electrons and holes. Strong screening allows the bound electron and hole wave functions to spread out over tens of nanometers in bulk semiconductors. As a result, inorganic semiconductors typically have small exciton binding energies (e.g., 20meV in bulk InN). However, quantum confinement forces the electron and hole wave functions to occupy less space, concentrating their charge density (see Figure 2). This diminishes the effect of dielectric screening and increases the binding energy. The confinement in 1nm diameter InN nanowires is so great that the exciton binding energy increases to 1.4eV and the emitted photons have energies of 2.3 to 2.5eV (depending on the cross-sectional shape), resulting in emission of green or cyan light (see Figure 3). 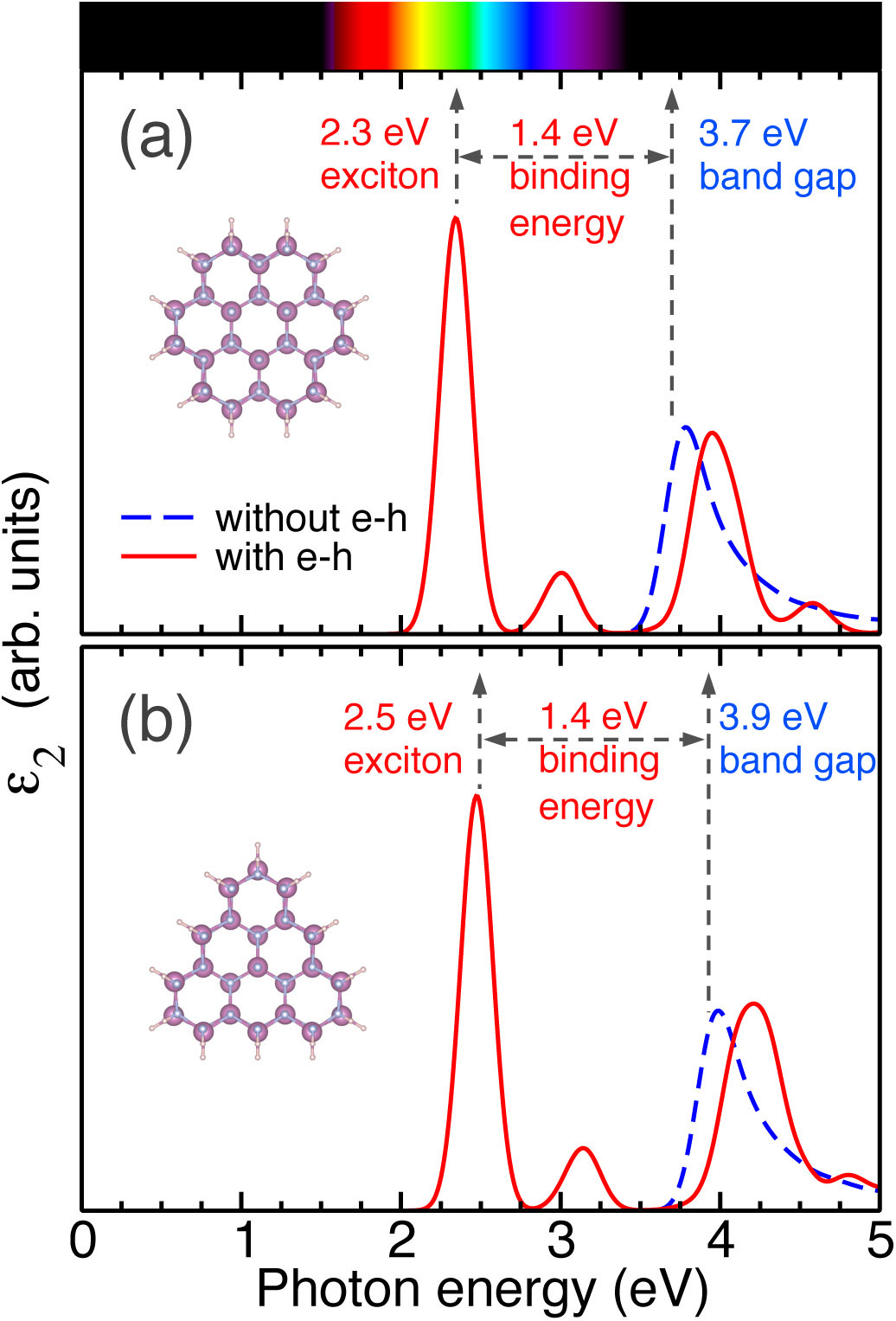 Figure 3. Calculated electronic and optical properties for (a) hexagonal and (b) triangular nanowires with and without including the effect of the electron-hole (e-h) interaction. The imaginary part of the dielectric function (ε2) indicates strong excitonic emission of (a) green or (b) cyan light. (Reprinted with permission.3 Copyright 2014 American Chemical Society.)

An important implication of these findings is that the light emitted from an InN nanowire can be tailored by changing the nanowire diameter or cross-sectional shape. Nanowires with smaller cross-sectional area will emit blue, indigo, or violet, while those with larger cross-sectional area will emit yellow, orange, or red. This could lead to highly efficient LED-based illumination and displays capable of producing a broad range of warm and natural-looking hues. While such small nanowires are difficult to synthesize, InN nanocrystals just a few nanometers in size have already been synthesized,4 and nanorods 1nm in diameter have been synthesized from other semiconductors.5 Moreover, the key aspects of our findings for nanowires can be generalized to nanorods and nanocrystals, in which quantum confinement plays an even larger role in modifying optical properties.

This work demonstrates that InN nanostructures offer an exciting new approach to visible-wavelength illumination and display applications. We are currently investigating the effect of strong quantum confinement on the electronic and optical properties of other types of nitride nanostructures such as quantum dots and quantum wells. Our goal is to elucidate the roles played by strain, composition, and quantum confinement in nanostructures in the efficiency and spectral tunability of nitride optoelectronic devices.

Emmanouil Kioupakis is an assistant professor of materials science and engineering at the University of Michigan. He received a PhD in physics from the University of California, Berkeley, in 2008. His research interests include the predictive modeling of optoelectronic materials. In 2013 he received a National Science Foundation CAREER Award for early-career researchers.