A novel polymer made from sulfur is easily molded and has superior transmission properties in the IR from 600nm up to 6μm with a 1μm stop band.
17 July 2014
Soha Namnabat, Robert Norwood, Eustace Dereniak, Jared Griebel and Jeffrey Pyun

Optical imaging and optical materials have developed hand-in-hand since antiquity. Glass science has matured due to the demands placed by the disciplines of optics and astronomy, with a tremendous range of glass compositions developed over the past 300 years. More recently, advances in chemistry allowed amorphous polymers with low light scattering to emerge as an alternative to inorganic glasses because they are inexpensive and easily molded. Polymers are now widely used in visible imaging systems. However, the materials commonly used for these applications, such as polymethylmethacrylate and polycarbonate, are not transparent in the mid-wave IR (3–5μm) or the long-wave IR (8–12μm). Indeed, when IR imagers developed, new optical materials were needed.

Over the past decade, the demand for compact, low-cost IR instruments has grown, in turn creating a demand for inexpensive optical materials that are transparent in several key IR spectral regions. Neither conventional oxide glasses nor hydrocarbon polymers can fill this need because their absorption increases significantly for wavelengths longer than 2–3μm. Crystalline IR materials such as silicon, germanium, zinc selenide, and halide salts are frequently used for IR optics, but are difficult to form into the complex shapes often needed for high-performance optics. Chalcogenide glasses1–3 have excellent transmission properties in the mid- to long-IR, but they incorporate either arsenic, sulfur, selenium, or tellurium. All except sulfur are toxic elements, and therefore difficult to fabricate safely. An IR-transmitting polymer could overcome many difficulties associated with the currently available materials.

While considering how to create nontoxic polymers for use in this part of the spectrum, we must understand why materials absorb light. IR absorption is generally due to molecular vibrations. More specifically, when chemically bonded atoms vibrate, they absorb IR light related to their vibrational frequencies. By modeling bonds as mass-spring oscillators, we concluded that higher vibration frequencies occur when the mass of at least one of the atoms is much smaller than the other. Standard optical polymers have an abundance of carbon, hydrogen, and oxygen, which are very light elements compared to the atoms in typical semiconductors, such as silicon and germanium, or the sulfur, selenium, or tellurium used in chalcogenides. The heavy atoms in chalcogenides shift their IR absorption to longer wavelengths. However, as we noted earlier, typical polymers have limited IR optical transparency at wavelengths longer than approximately 2μm. To make a polymer that is transparent in the mid-IR, we needed to reduce the hydrogen content and use predominantly heavy atoms. We chose to concentrate on sulfur because it is a heavy atom present at small concentrations in many organic compounds. Using a new technique called inverse vulcanization,4 we created sulfur-rich copolymers that provide greatly improved transparency at near- and mid-IR wavelengths compared to conventional organic polymers.

The synthesis begins by melting and heating pure sulfur (S8) to temperatures higher than 159°C. The S8 rings open and bond to one another to make polymeric sulfur. Pure polymeric sulfur is not stable at ambient temperature, so when the liquid cools, the polymer chains may break apart and revert to elemental sulfur. To make this process irreversible and maintain these high-molecular-weight sulfur polymer chains, we directly reacted the molten sulfur with 1,3-diisopropylbenzene (DIB), a divinylic monomer. By using DIB as the comonomer and controlling the ratio of DIB to sulfur, we were able to obtain different compositions for this copolymer. We made polymers with sulfur concentrations as high as 85%.

The polymers' optical properties,5 such as refractive index and transmission spectrum, depend on the ratio of DIB to sulfur. The materials all share an interesting and useful feature: they are transparent from the near-IR up to 5–6μm, except for a roughly 0.5μm-wide absorption peak around 3μm (see Figure 1). Therefore, this material could be used for some mid-IR optics and imaging applications. It retains the advantages of polymers, which can easily be molded into lenses or other optical elements.5 As Figure 2 shows, the sulfur copolymer window is transparent at mid-IR wavelengths, whereas the more conventional polymer used for vision correction in eyeglasses is opaque. Furthermore, the refractive indices of these polymers range from 1.78 to 1.85, which is much higher than the refractive index of standard optical polymers.6 Materials with higher refractive indices bend light more, which enables thinner lenses and thus lighter, smaller optical systems. Next, we will continue to study the mechanical and optical properties of the copolymer at different temperatures. Ideally, we want to partner with a company to test the materials in IR imaging or sensing devices. 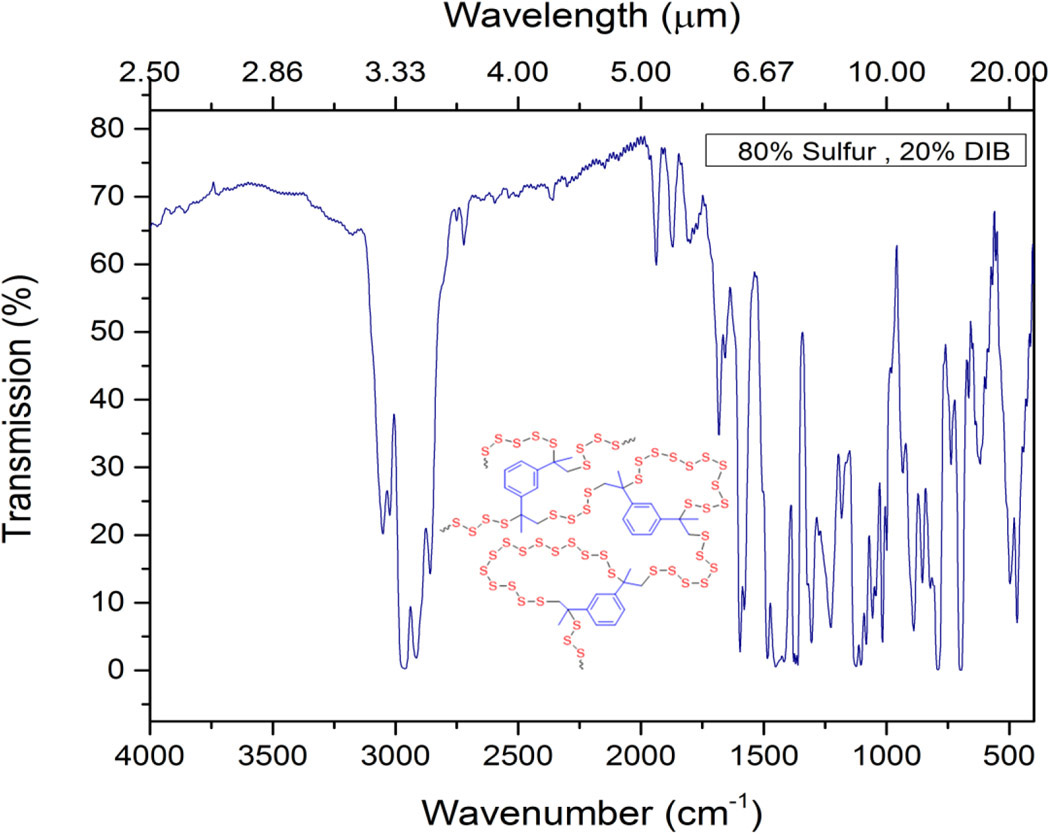 Figure 1. Transmission spectrum for a freestanding 200μm-thick polymer made from 80% sulfur and 20% 1,3-diisopropylbenzene (DIB) shows unusually high transmission for a polymer in most of the mid-IR. The inset shows the molecular structure for the polymer. 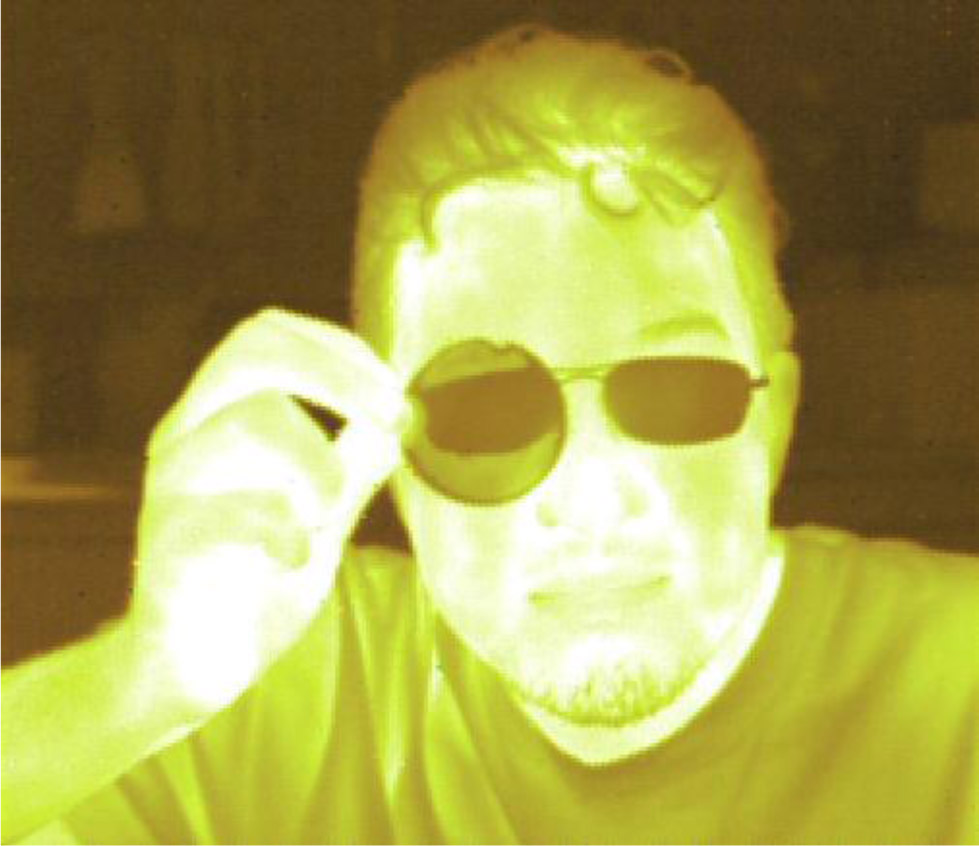 Figure 2. A mid-IR thermograph of one author's face. Note that the eyeglasses are dark due to IR absorption in the conventional optical plastic. The round sulfur copolymer window, however, is transparent in the mid-IR.

New optical materials are desperately needed for IR optical technology. Moldable optics can be made at a lower cost, more easily, and with less concern about toxicity than current options. These polymers could replace semiconductor optics and chalcogenide glasses used in current IR systems, as well as opening the door to entirely new applications.

Soha Namnabat has been a PhD candidate since 2009, conducting research on magneto-optic and electro-optic polymers and their applications in devices such as modulators. He earned his BS in physics from Zanjan University in 2006.

Robert A. Norwood performs research on photonic materials and devices. Prior to his current position as professor, he spent 15 years in R&D leadership positions in industry at both Fortune 100 corporations (including AlliedSignal) and venture-capital-backed startups (as both vice president and chief technology officer of Photon-X). He is a world expert in polymer integrated optics and optical materials, with more than 100 refereed publications, seven book chapters, 29 issued US patents, and 65 invited talks. He has served as a conference chair or co-chair for OTF (sponsored by the OSA) and Linear and Nonlinear Optics in Organic Materials (sponsored by SPIE), and has served on the program committee for both the OFC and CLEO conferences, among others. He is both an OSA Fellow and an SPIE Fellow, as well as a member of the American Physical Society and IEEE. He holds a PhD in physics from the University of Pennsylvania, and a BS in physics and mathematics from the Massachusetts Institute of Technology.

Eustace L. Dereniak is a professor whose research interests include detectors for optical radiation, imaging spectrometers, and imaging polarimeter instrument development. He is a co-author of several textbooks including Optical Radiation Detectors and Infrared Detectors and Systems, published by Wiley-Interscience, and Geometrical and Trigonometric Optics with Cambridge University Press. His publications also include over 100 authored or co-authored refereed articles. Prior to his academic career, he spent many years in industrial research. He was President (2012) of SPIE and a Fellow of both SPIE and OSA. He is currently on the board of directors of the Council of Scientific Society Presidents.

Jared Griebel is currently a fourth-year PhD candidate. He graduated in 2010 with a BS in engineering from Case Western Reserve University, where he majored in polymer science and engineering. In 2011, he joined Jeffrey Pyun's research group, where he was involved with the development of sulfur chemistry to generate novel copolymeric materials for energy and optics applications.

Jeffrey Pyun obtained his BA in chemistry at Northwestern University in 1997 and his PhD in 2002. In 2004, he joined the faculty in chemistry at the University of Arizona as an assistant professor and was promoted to associate professor in 2010. He is currently working on materials that are anticipated to broadly impact the areas of information storage, optical materials, sulfur utilization, photocatalysis-solar fuels, and energy storage technologies. He has received the National Science Foundation CAREER Award, the Office of Naval Research Young Investigator Award, the IBM Faculty Award, the Alfred P. Sloan Foundation Research Fellowship, and the Information Storage Industry Consortium Technical Achievement Award. He was also recently appointed a Kavli Fellow from the Kavli Institute and the US National Academy of Sciences.