Overall water splitting to form hydrogen (H2) and oxygen (O2) gas on a semiconductor photocatalyst under visible light is a possible means of solar-to-fuel energy conversion.1–3 Promising visible-light-drive photocatalysts include oxynitrides, which can harvest a wide range of visible light (500–750nm) and catalyze both H2 and O2 half reactions.2 Oxynitrides containing typical metal cations with d10 electronic configuration, such as GaN–ZnO and ZnGeN2–ZnO solid solutions, are active photocatalysts for visible wavelengths up to 500nm.4, 5 However, d0-type (oxy)nitrides are also able to absorb light with wavelengths longer than 600nm (band gap smaller than 2.0eV), which is more efficient.2

A major drawback of oxynitrides, regardless of electron configuration, is their low activity for water reduction, which is partly due to their inherently high defect density. Oxynitrides can be readily prepared by heating the corresponding metal oxides under a flow of ammonia at high temperatures (typically >1123K). During this process, some surface metal cations are inevitably reduced and charge-balancing anionic vacancies trap photogenerated electrons and holes, lowering photocatalytic activity. Colleagues and I have developed a new preparation route that produces less-defective oxynitride with enhanced H2 evolution efficiency.3 Using tantalum oxynitride (TaON), a representative d0 oxynitride that is active for both water reduction and oxidation under visible light, we applied nanoparticulate zirconium oxide (ZrO2) as a ‘protector’ to yield ZrO2/TaON composite. We expected that ZrO2-modifiers dispersed on the surface of Ta2O5 would protect Ta5+ cations from being reduced during nitridation by forming Zr–O–Ta bonds, as Zr–O bonding is less susceptible to reduction than Ta–O bonding.

We successfully prepared such a composite material consisting of TaON and ZrO2 nanoparticles by modifying Ta2O5 powder with nanoparticulate ZrO2 followed by nitridation at 1123K for 15h under NH3 flow. The detail of the method can be found elsewhere.6 Structural analyses revealed that the crystallographic properties of TaON (such as particle size and crystallinity) remained largely unchanged, but the density of surface defects in TaON was reduced.

With further modification by platinum nanoparticles as additional promoters, ZrO2/TaON becomes active as an H2 evolution photocatalyst in a two-step water splitting system in combination with platinum oxide (PtOx)-loaded tungsten oxide (WO3) as an O2 evolution photocatalyst in the presence of an iodate/iodide (IO3−/I−) redox couple, generating H2 and O2 under visible light with an apparent quantum yield of 6.3% at 420nm.7 This value is six times greater than the yield achieved using a TaON analog. To the best of our knowledge, this is the highest reported value to date for a nonsacrificial visible-light-driven water splitting system. The reaction scheme is illustrated in Figure 1. 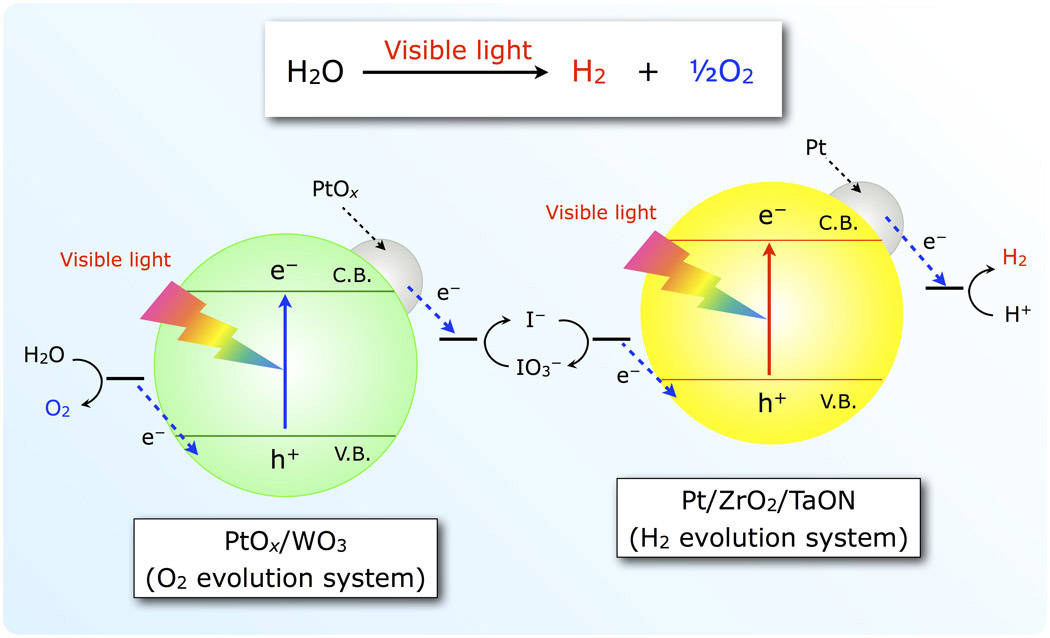 Figure 1. A two-step water-splitting system consisting of platinum/zirconium oxide/tantalum oxynitride (Pt/ZrO2/TaON) and platinum oxide/tungsten oxide (PtOx/WO3) in the presence of an iodate/iodide (IO3−/I−) redox couple. Hydrogen (H2) and oxygen (O2) evolution occur at Pt/ZrO2/TaON and PtOx/WO3, respectively, and electron transfer between the two materials is mediated by the IO3−/I− couple. V.B. and C.B. indicate valence and conduction band of each semiconductor, respectively. Nanoparticulate Pt and PtOxloaded on ZrO2/TaON and WO3, respectively, work as promoters for reduction reactions. e−and h+: Electron and hole, respectively.

The optimized ZrO2/TaON is also capable of splitting pure water into H2 and O2 without any redox reagent under visible light, when modified with core/shell-structured ruthenium oxide/chromium oxide (RuOx/Cr2O3) nanoparticles and colloidal iridium oxide (IrO2), which respectively work as H2 and O2 evolution sites.8 In particular, the loaded IrO2 plays an important role promoting water oxidation by suppressing the oxidative decomposition of the TaON component by holes. This is the first successful example of achieving visible-light-driven overall water splitting through the use of an oxynitride having d0-electronic configuration.

In summary, we developed an effective method to reduce the density of anionic defects in TaON with d0 electronic configuration, and we succeeded in enhancing H2 evolution efficiency. As a result, efficient two-step overall water splitting as well as redox-mediator-free direct water splitting is shown to be achievable. We also found that a similar surface-modification strategy reduces anionic vacancies in other oxynitrides, such as barium tantalum oxynitride (BaTaO2N), which harvests more visible photons than TaON.9–11 We are now conducting more detailed studies.

Kazuhiko Maeda is an associate professor. He received a PhD from the University of Tokyo under the supervision of Kazunari Domen in 2007, and his research interests include photocatalytic and photoelectrochemical water splitting using semiconductor particles, based on nanotechnology and materials chemistry.