A new approach has achieved quantum-enhanced contrast and resolution in biological microscopy, opening the possibility of subcellular imaging with unprecedented resolution.

The field of quantum imaging investigates the influence of quantum mechanics on imaging systems. The primary focus has been on establishing the fundamental constraints imposed on imaging by quantum mechanics, and developing methods to overcome these constraints and thereby improve performance. In particular, nonclassical states of light that exhibit quantum correlations between photons are known to allow both the shot-noise and diffraction limits to be surpassed. The prospect of surpassing these limits is particularly attractive for biological imaging.

Most subcellular structures have length scales far below the diffraction limit of visible light. Imaging these structures therefore requires sub-diffraction-limited resolution. Furthermore, matter at the nanoscale interacts only weakly with light, such that the measurement signal-to-noise ratio is often limited by shot noise.1 The signal-to-noise can generally be improved without recourse to nonclassical light by increasing the optical power used to make measurements, or by focusing the light more tightly. In biological systems, however, higher optical power introduces photochemical changes to biological processes,2 local heating,3 and physical damage,4 placing stringent constraints on the optical power levels that can be used.

The prospects of quantum imaging in biology have been recognized since the 1980s.5–8 However, technical challenges associated with interfacing the two fields have made limited progress, with quantum imaging technology still in its infancy and requiring significant advances to compete with its conventional counterparts. Several recent experiments explored the use of entangled photon pairs in imaging, making important fundamental proof-of-principle demonstrations of quantum-enhanced imaging.9–12 So far, however, entangled photon pairs are only experimentally available from sources with extremely low flux and, therefore, low optical power. This constraint has limited the imaging contrast achieved with such sources to levels far worse than that achieved routinely in conventional imaging.

Our group developed an alternative approach that combines quantum enhancement with extremely high precision. Instead of using entangled photons, we used squeezed states of light to perform sub-shot-noise particle tracking (see Figure 1). A squeezed state is a nonclassical state in which the noise of one quadrature component (e.g., the amplitude or the phase) is below the standard quantum limit. Squeezed light can be generated with any optical power, and can offer greater precision than is achievable with any classical light source of the same brightness. In our demonstration, we tracked the thermal vibrations of particles within living yeast cells, achieving sub-shot-noise biological measurements for the first time.13 Such experiments allow the viscoelasticity of a small region of the cell to be precisely characterized in real time. Viscoelasticity measurements can provide important information about both the local structure and function of the cells,14 and can even allow discrimination of healthy and cancerous cells.15 Our measurements with squeezed light—shown in Figure 2(a)—allowed the viscoelasticity to be characterized 64% faster than was possible with coherent laser light. 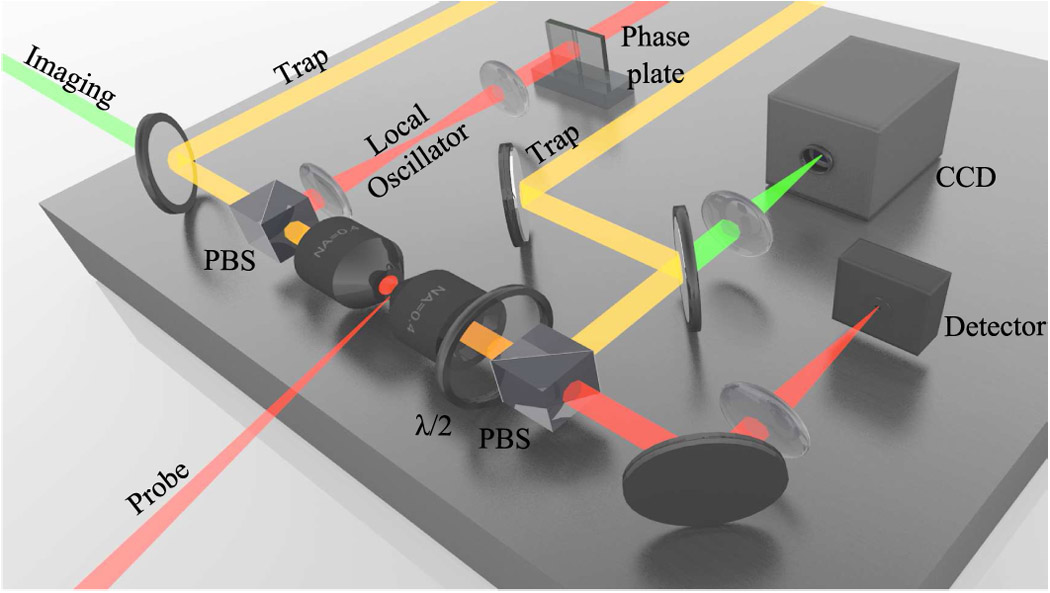 Figure 1. Experimental setup. Motion of a particle near the focus is tracked with an amplitude-squeezed local oscillator and an amplitude-modulated probe (red). The probe provides dark-field illumination, with the particle tracking signal arising from interference between scattered light from the probe and the local oscillator. Particles are also manipulated with trapping fields (yellow), and visualized on a CCD camera using an imaging field (green). PBS: Polarizing beam splitter. NA: Numerical aperture. λ/2: Half-wave plate. 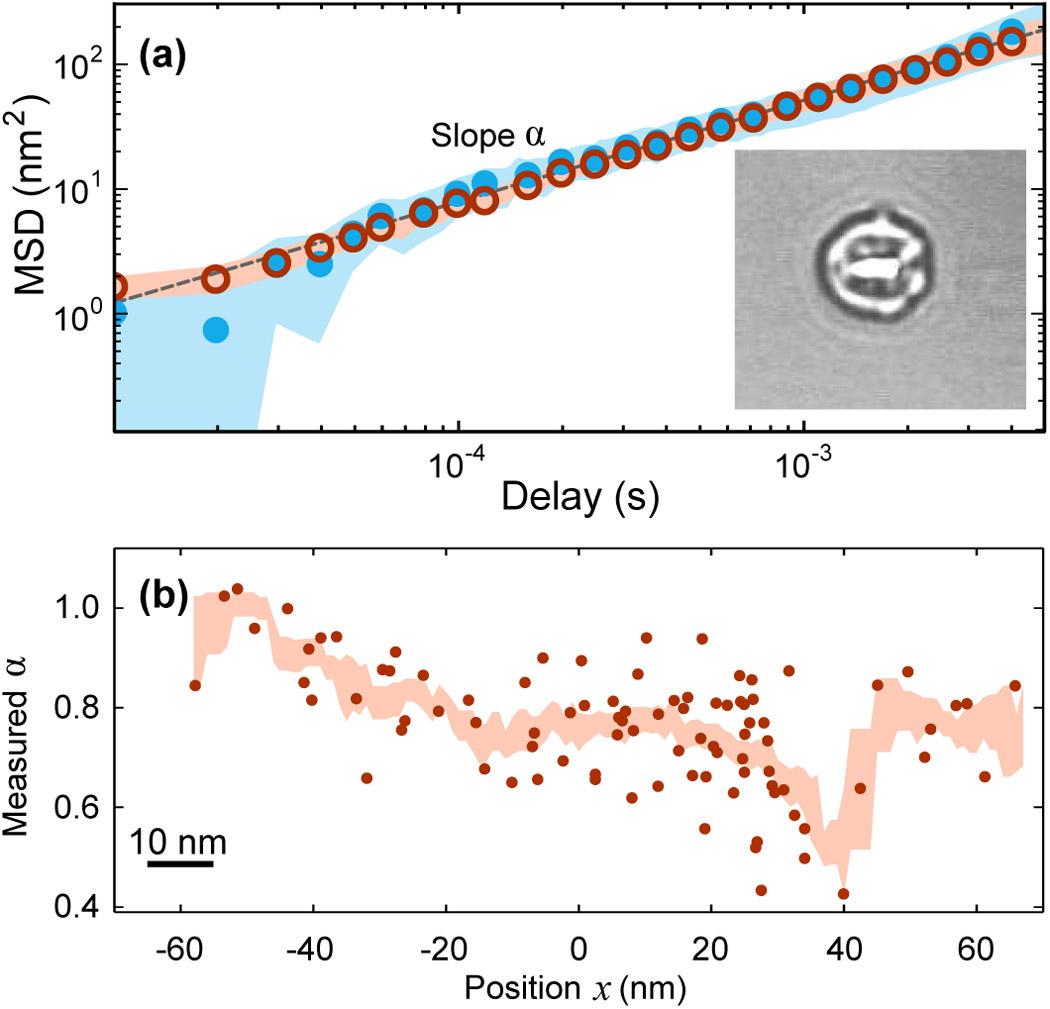 Figure 2. Measured thermal motion of a lipid granule within a living yeast cell (imaged in the inset). (a) The mean squared displacement (MSD) is constructed with both squeezed light (red) and coherent light (blue) for a range of delay times. Each circle represents a measurement, and shaded regions represent the running mean and standard error. Measurements with squeezed light are subject to lower noise, which visibly improves the precision with which the MSD can be reconstructed. The slope of this data determines the diffusive parameter α. An increase in particle confinement is evident as a reduction in α. (b) An example 1D profile of α. A sharp dip is evident at x=40nm, indicative of a narrow region of confinement.

In a further set of experiments, we resolved spatial features within the cell by employing an approach known as photonic force microscopy (PFM).16 Just as an atomic force microscope constructs an image by dragging a cantilever tip over a surface, PFM uses a nanoparticle to map out structure.17 Our experiment showed that subcellular structure as small as 10nm can be observed by its local influence on the thermal motion of nanoparticles: see Figure 2(b). This resolution is comparable to that achieved in state-of-the-art classical PFM.18 Furthermore, we demonstrated that squeezed light allows quantum-enhanced resolution,16 improving upon the resolution available with coherent laser light by 14%. This result was the first biological demonstration of quantum-enhanced resolution.

Although this experiment demonstrated the potential of quantum-enhanced PFM, our apparatus only allowed particle tracking along one dimension. To retrieve a full sub-diffraction-limited image of a region of the cell requires three-dimensional tracking of the nanoparticle. The lack of 3D tracking precludes a quantitative biophysical interpretation of the spatial structure observed in our PFM.

To make our technique more practical, we are currently working to combine 3D tracking with quantum-enhanced precision. The initial 1D demonstration has shown our technique to be a promising avenue. With an improved source of squeezed light, an order-of-magnitude enhancement in resolution may be possible, which could allow 3D images with 0.1nm-scale resolution. This unprecedented resolution would allow studies of some of the smallest details in the cell, which have so far evaded observation.

Michael Taylor and Joachim Knittel were researchers at the Queensland Quantum Optics Laboratory for the duration of this work.

Warwick Bowen leads both the Queensland Quantum Optics Laboratory and the quantum optomechanics program of the Australian Centre for Engineered Quantum Systems.

Jiri Janousek and Boris Hage were researchers in the Quantum Imaging Laboratory of the ANU Department of Quantum Sciences and the Australian Centre for Quantum-Atom Optics (ACQAO) for the duration of this work.

Vincent Daria is team leader of the neurophotonics group in the College of Medicine, Biology, and Environment.

Hans Bachor led both ACQAO and the Quantum Imaging Laboratory for the duration of this work.