Hearing loss is the most common sensory health issue due to the multiple effects of noise, aging, disease, and heredity. According to the World Health Organization, more than 360 million people worldwide suffer from disabling hearing loss.1 Current therapies for hearing loss treat some of the symptoms by providing volume amplification, but there are no curative therapies. The development of effective therapies significantly depends upon a detailed understanding of the complex mechanisms of the ear. The cochlea—the auditory portion of the inner ear, shown in Figure 1(a)—transduces sound pressure waves into electrical signals through mechanical vibrations of the organ of Corti (OC): see Figure 1(b). Hearing loss occurs when there are problems within the OC. Unfortunately, current medical imaging technologies, such as magnetic resonance imaging and computed tomography, have insufficient spatial and temporal resolution to provide meaningful imaging of the OC. In humans, the cochlea is buried deep inside the skull, precluding the use of higher resolution optical imaging modalities for investigating cochlear function. 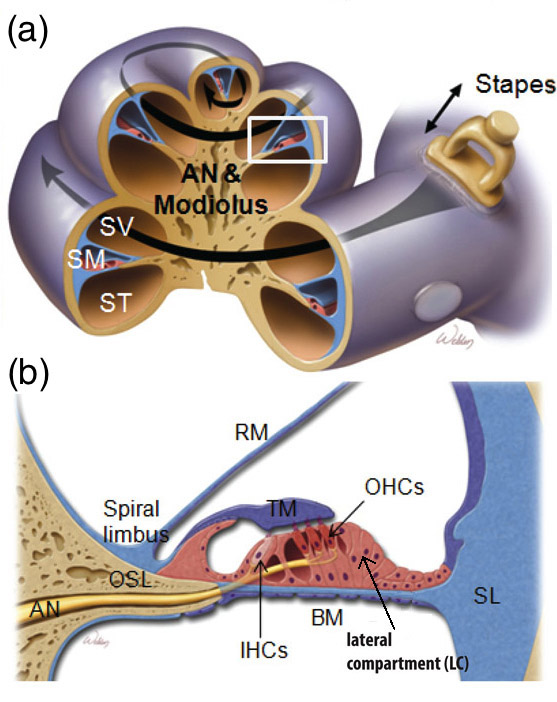 Figure 1. Artist's rendering of (a) the cochlea and (b) the cochlear partition. The organ of Corti is the area between the tectorial membrane (TM) and basilar membrane (BM). The cochlear turn highlighted by the white box corresponds to the turn in the center of the image in Figure 2. Modified with permission.2 AN: Auditory nerve. Modiolus: Axis around which the cochlea coils. IHC: Inner hair cell. LC: Lateral compartment. OHC: Outer hair cell. OSL: Osseous spiral lamina. RM: Reissner's membrane. SL: Spiral lamina. SM: Scala media. ST: Scala timpani. Stapes: A bone of the middle ear that transmits vibrations to the outside of the cochlea. SV: Scala vestibuli.

Fortunately, the morphology and function of the inner ear is preserved in lower mammals such as the mouse, and the ability to genetically manipulate the mouse makes it a powerful model for hearing loss. Nevertheless, experimental measurements of the mouse cochlear function have been confounded by a mass of dense bone encapsulating the OC. The usual approach is to create a hole in the bone exposing the cochlear partition and enabling vibratory measurements via laser Doppler vibrometry of the basilar membrane. However, this procedure can potentially change the mechanical properties of the cochlea as well as cause damage to the cochlear partition leading to unreliable results. Likewise, it only provides information about a single spot within the OC.

Optical coherence tomography (OCT) is a rapidly developing imaging technology that is gaining clinical acceptance in cardiology and is widely used in clinical ophthalmology. It is capable of high-speed, high-resolution in vivo volumetric imaging. In recent years there has been increased interest in using OCT for imaging in the ear.2–5 When used for imaging the mouse cochlea it is possible to image directly through the dense bone without making a hole and obtain images of the cochlear partition including the OC. Figure 2 is a cross-sectional image of a live mouse cochlea with the key structures labeled and compared to the artist's rendering in Figure 1. 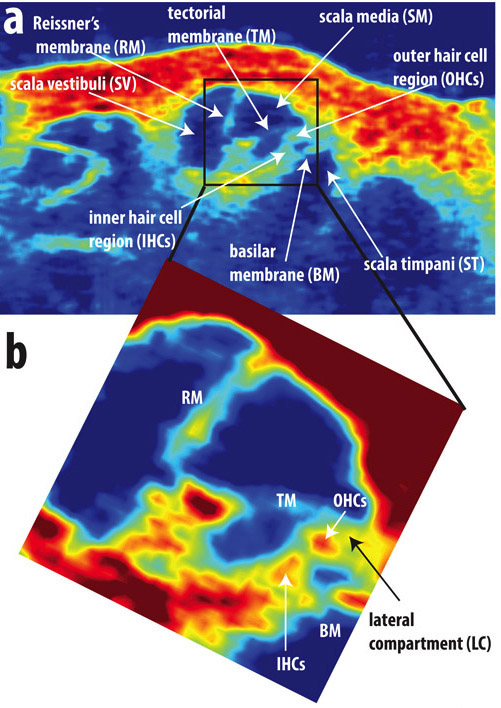 Figure 2. (a) Optical coherence tomography (OCT) cross-sectional image of the cochlea in a live mouse. Important features have been labeled. (b) Expanded view with the color scale saturated for the bone—red in panel (a)—to improve the visibility of the labeled soft tissues of the cochlear partition. The image has been rotated to match the orientation in Figure 1.

Beyond simply measuring morphology, we have also measured cochlear function by monitoring the interferometric phase to detect motion parallel to the light path. This extension of OCT, referred to as phase-sensitive OCT (PhOCT), can measure the vibratory response with sub-nanometer sensitivity at each spatial point within the OC. This exquisite sensitivity is achieved without the use of any active phase stabilization or common-mode interferometry. Instead, working in the frequency domain we can achieve performance limited only by shot noise (i.e., noise due to quantum variations) for the vibrational measurements.

To measure the vibratory response of the cochlea, we played tones at various frequencies and intensities in the ear of an anesthetized mouse coincident with PhOCT imaging of the cochlea. The result is a data set with motion amplitude and phase at each spatial position and at every tonal frequency and intensity. Examples of magnitude and phase data for one spatial position in the OC are shown in Figure 3. The peak in the magnitude of the motion corresponds to the characteristic frequency (CF) of that region of the cochlea. 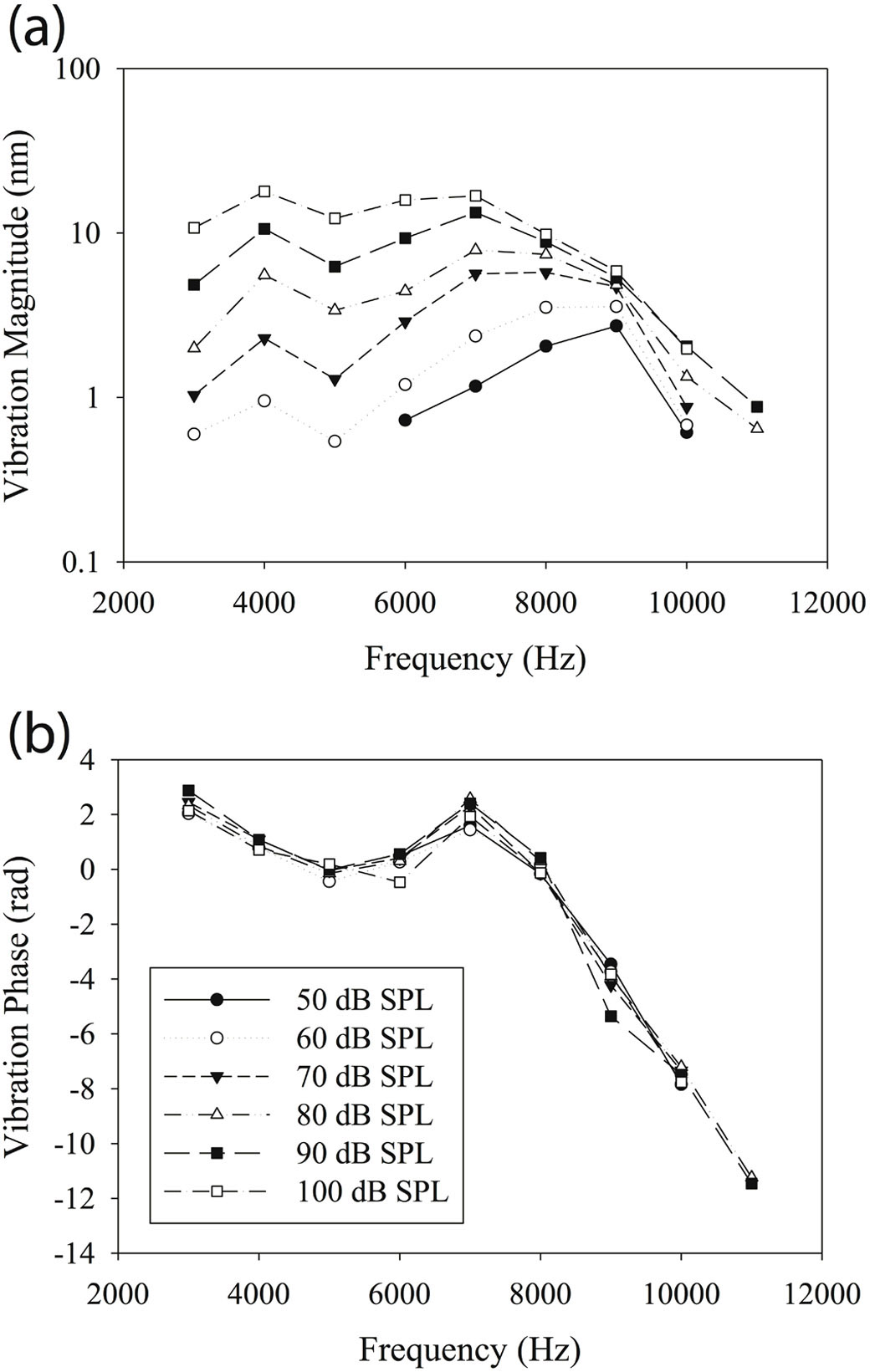 Figure 3. (a) Magnitude of the vibration at one point in the organ of Corti measured at various frequencies and sound pressure levels (SPL, sound intensity). (b) Phase of the vibrations relative the sound stimulation. Modified with permission.6 Note: lateral compartment is a nonstandard term we have developed to indicate the area lateral to the outer hair cell region and consisting of Henson's, Boettcher's, and Claudius' cells.

From that data set we were able to extract detailed maps of the motion. For instance, an online video shows the motion of the OC in a normal mouse.7 Figure 4 shows three still images from the video that illustrate the range of vertical deflection of the basilar membrane. The key regions are denoted by color: tectorial membrane (blue), outer hair cell region (green), lateral compartment (red), and basilar membrane (yellow). The left and right columns correspond to data recorded for a live mouse, measured at 60dB SPL (sound pressure level, intensity) and a dead mouse measured at 80dB SPL, respectively. The top and bottom rows correspond to measurements at the CF (8kHz) and below the CF (5kHz), respectively.

The influence of the gain-producing outer hairs is immediately apparent in the much larger motion of the live mouse OC. Even at 20dB higher SPL the dead mouse OC, which lacks the active gain, moves much less. The motion of the dead mouse OC is similar to what would be seen in a human with hearing loss caused by damage to the outer hair cells related to aging or noise exposure. A comparison of the movement at the CF and below reveals an obvious change in the magnitude of the motion, but also more subtle changes in the phase of the motion in the different regions. The basilar membrane and lateral compartment vibrate almost perfectly out of phase at the CF. Below the CF they vibrate with a much smaller phase lag. A physical interpretation of this phenomena is that with the lateral compartment and basilar membrane vibrating out of phase, the OC is much more efficient at pumping the fluid of the inner ear across the stereocilia of the inner hair cells. It is stimulation of these stereocilia that ultimately leads to an activation potential on the auditory nerve and hearing.

In summary, hearing loss is a common disability with no cure. Unfortunately, it is not possible to study the origins of hearing loss in the human inner ear. However, lower mammals such as the mouse have very similar morphology and function. PhOCT is proving to be an exceptional tool for interrogating the intricate mechanics of the mouse inner ear that can be disrupted to cause hearing loss. We are currently studying transgenic mice that have targeted mutations in organ of Corti biomechanics, some of which replicate human disease. Improving our understanding of the complex processes that constitute hearing increases the probability that we will eventually develop a cure.

Jesung Park is an assistant research scientist whose research interests are focused in the area of biophotonic imaging for medical diagnosis of atherosclerosis, cancers, and hearing loss.

John Oghalai is an associate professor. In addition to caring for patients with hearing loss, his research interests include the study of the mechanisms underlying progressive hearing loss and the development of tools to diagnose and treat hearing loss.