Biomarker and microenvironmental strategies for delivering particles to tumors

Understanding a variety of biochemical features and biological processes might enable the design of plasmonic particles that home in on tumors for imaging and therapy.
13 June 2014
Fulvio Ratto, Francesca Tatini, Roberto Pini and Sonia Centi

The use of noble metal particles to stain tumors and achieve optical contrast for biomedical applications has taken on a clinical dimension,1, 2 with applications that include optical hyperthermia to ablate cells and photoacoustic imaging of cancer. Obtaining plasmonic bands in the near-IR window to penetrate deeply into biological tissue is now possible by tailoring the shape and size of the particles used.3 As an example, gold nanorods exhibit excellent optical absorbance and stability4 and have a surface that can be modified with functional moieties that alter their biological profiles. When grafted with polyethylene glycol (that is, PEGylated), these nanorods are nontoxic to cells (noncytotoxic), have few interactions with blood plasma components and macrophages, and are, therefore, cleared slowly from the blood.5 This feature enables their passive accumulation in tumors that exhibit enhanced permeability and retention because of a ‘leaky’ vascular network and poor lymphatic drainage. In addition, using suitable ligands might strengthen this effect and enable active recognition of certain targets.

Choosing the right targets is critical. A common approach is to identify ‘fingerprints’ of the high metabolic activity of malignant cells, such as the overexpression of growth factor and folate receptors. However, these molecules are also broadly distributed in healthy tissue, making discrimination difficult. Instead, we have focused on antigens that are specific to certain diseases,6 such as CA125, which is a mucin (protein) recurring in ovarian, endometrial, fallopian tube, lung, breast, and gastrointestinal cancers. CA125 is also a standard biomarker for ovarian cancers; patients have an excessive amount of it in their blood serum. We showed that PEGylated gold nanorods modified with anti-CA125 antibodies exhibit high specificity for cells overexpressing CA125: see Figure 1(a,b). In addition, these particles are compatible with intravenous injection owing to their minimal interaction with blood plasma components, erythrocytes (red bood cells), and macrophages. Most of their ability to detect cells overexpressing CA125 is retained even in environments that might saturate the ligand, such as the blood plasma and ascites of mice with ovarian cancers. 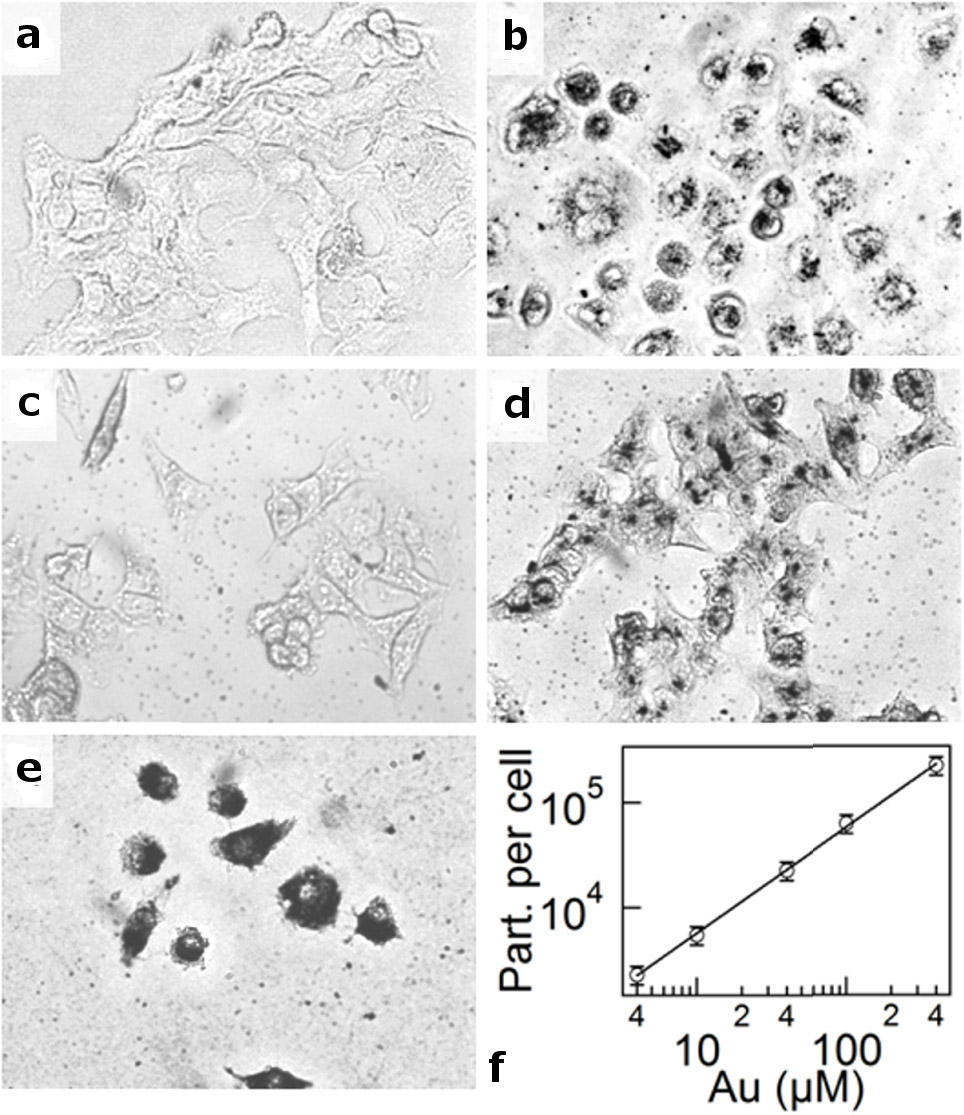 In most cases, identification of the correct targets is complicated both by the dissimilarities among malignant lesions and similarities between normal and malignant cells. Rather than consider individual cells, we looked at the differences between healthy and tumor microenvironments. The incoherent vascularization and high oxygen consumption of solid tumors often generates hypoxia (an environment of reduced oxygen levels). Hypoxic cells operate a metabolic switch to anaerobic glycolysis, which requires the expression of specific enzymes such as transmembrane isoforms of carbonic anhydrases.6 To recognize these enzymes, we terminated PEGylated gold nanorods with carbonic anhydrase inhibitors, including sulfonamide moieties.7 We found that these particles localized to carbonic anhydrase-expressing cells and delivered the sulfonamide treatment effectively, treating hypoxic cells both by alkalinization of their extracellular environment and by making the cells sensitive to optical excitation: see Figure 1(c,d). Moreover, we speculate that it might be possible to exploit heat diffusion to extend the hyperthermic effect from hypoxic to normoxic areas (those with normal oxygen levels) in a solid tumor.

With hyperthermic treatment potentially going beyond the lengthscale of the individual cells, it is possible to suggest alternatives for the delivery of contrast agents. One example is to transfer the pursuit of specificity from a molecular ligand to a cellular vehicle.7 A broad pool of growth factors, cytokines, and chemokines in the tumor microenvironment attract so-called tumor-associated macrophages that are often conditioned to support the malignant cells. We can recruit these macrophages to carry the particles to the tumor as a Trojan horse, which can infiltrate compartments normally protected from the bloodstream, such as the brain. To achieve this, we modified PEGylated gold nanorods with quaternary amines—producing a cationic profile—that imparted high affinity for plasmatic membranes and efficiency of cellular uptake. We found that these particles underwent massive accumulation in macrophages by endocytic pathways—see Figure 1(e,f)—without immediate effects on their viability and function. At present, we are investigating the preservation of the macrophages' motility and readiness to infiltrate malignant lesions.

In summary, we are exploring complementary pathways to deliver particles to tumors by the interplay of passive and active strategies. In pursuit of ideal targets and ligands, we have drawn biological inspiration, moving from the individual cells with their intrinsic anomalies to the cellular response, and finally the bodily response to the tumor microenvironment. At present, all these strategies show promise and the preference for one or the other might require a case-by-case decision. Our future work will focus on comparing all these opportunities in vivo and addressing ways to combine them.

This work is supported in part by the Project of the Health Board of the Tuscan Region NANOTREAT.

Fulvio Ratto received his PhD in Materials Science from the University of Montreal in August 2007. In November 2011, he was appointed junior researcher. His research focus now is on nanotechnology and its applications in microelectronics and biomedical optics.