Soliton interactions: to the Sun and back

Picosecond pulses of light, trapped in a loop of optical fiber, interact so weakly that propagation over astronomical distances is required to reveal the full dynamics.
29 May 2014
Miro Erkintalo, Jae K. Jang, Stuart G. Murdoch and Stéphane Coen

Solitons are self-localized waves whose spreading is arrested by a material nonlinearity.1, 2 They are ubiquitous in nature, and manifest themselves in diverse physical contexts such as water, plasmas, DNA, and ultracold gases.3 Despite being waves they behave like particles, interacting by exerting forces on one another.4, 5 These interactions are central to a number of nonlinear wave phenomena, and they have been extensively studied across the physical sciences. However, optics has indisputably led the vanguard in advancing our understanding of soliton interactions over the past 30 years.6

Optical solitons interact in a myriad of ways. They have been shown to repel, attract, break up, or even annihilate.6 These interactions can be short-range, arising when the tails of the solitons overlap, or long-range, when a nonlocal response couples widely separated solitons.7 We have recently made observations that take soliton interactions to the next level.8 Specifically, we have observed optical solitons interacting across an unprecedented range, with the interactions so weak that propagation over astronomical distances is required to reveal the full dynamical picture.

Astronomical distances are within our reach because we experiment with temporal cavity solitons: pulses of light going round and round a loop of optical fiber.9, 10 Their temporal spreading is prevented by nonlinear interactions with the fiber medium, and any energy they lose they replenish from a continuous-wave laser ‘driving’ the cavity. The remarkable flexibility of our system enables systematic excitation of solitons with predetermined temporal separations.8

Through real-time monitoring of the cavity dynamics, we find that two temporal cavity solitons traveling one behind the other can interact despite being separated by several hundred soliton widths. Figure 1 shows an example of dynamics measured experimentally using a real-time oscilloscope. The trailing soliton, initially separated from its leading companion by 1.8ns, is seen to be gradually repelled to a separation of 3.6ns over 30 minutes of measurement. In ultrafast optics, 30 minutes is an incredibly long time, which can be appreciated by considering the distance traversed by the solitons. During the 30 minute interaction, the solitons travel around the 100m fiber loop no less than 3.6 billion times, adding up to a total distance of 360 million kilometers, or 2.4 astronomical units: more than twice the distance from Earth to the Sun. Over the entire colossal distance the solitons interact, but so weakly that the total change in their temporal separation is less than 2ns, equivalent to just 40cm in spatial separation. This is 12 orders of magnitude smaller than the total distance traveled. The interactions are so weak that, over a single roundtrip across the 100m fiber loop, the solitons change their temporal separation by as little as half an attosecond (0.5×10−18 second), which is seven orders of magnitude smaller than their 2.6ps duration. 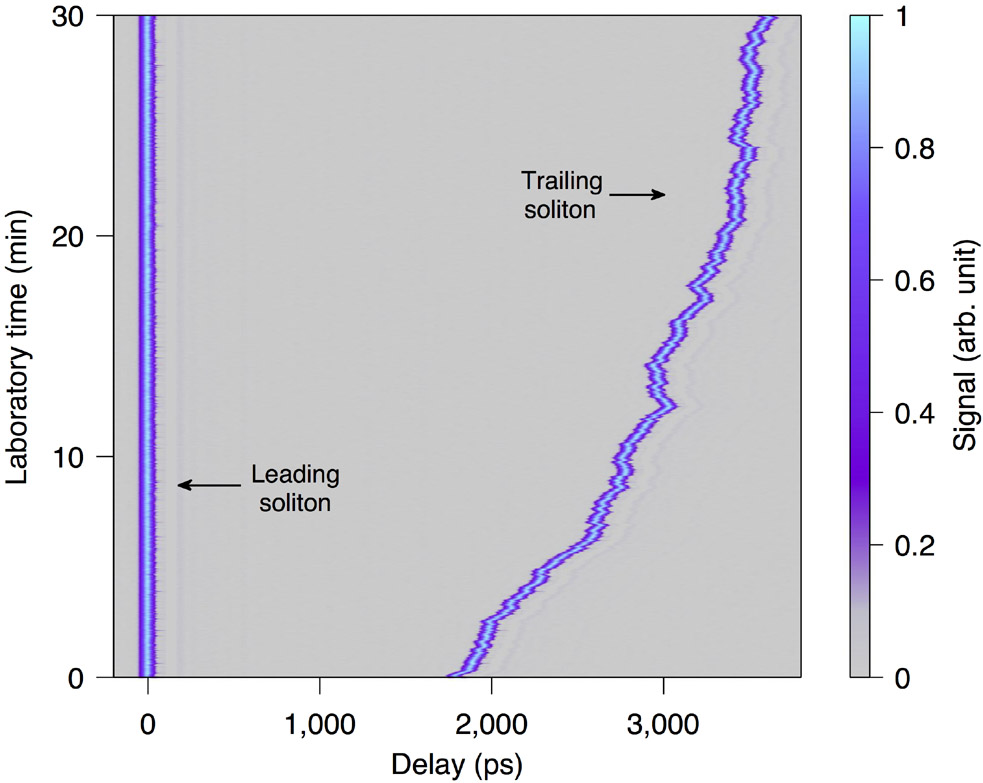 Figure 1. Color plot made of successive oscilloscope traces at the cavity output, showing the interaction of two cavity solitons initially separated by 1.8ns.

In our system the solitons interact through sound. The leading soliton physically deforms the fiber core through a process known as electrostriction, which generates sound waves that propagate radially outward from the core (see Figure 2).11 The sound wave alters the refractive index of the fiber core, causing the trailing soliton to change its velocity relative to its leading partner. Echoes from the cladding-jacket boundary permit the sound wave to periodically re-enter the core, giving rise to recurring perturbations in the core refractive index. The mechanism has been known for decades,11 but never has it resulted in interactions as weak as those observed by us. This is because cavity solitons are exceptional: their phase is locked to the coherent driving beam. Phase locking prohibits significant changes in soliton velocity, resulting in greatly weakened interactions. 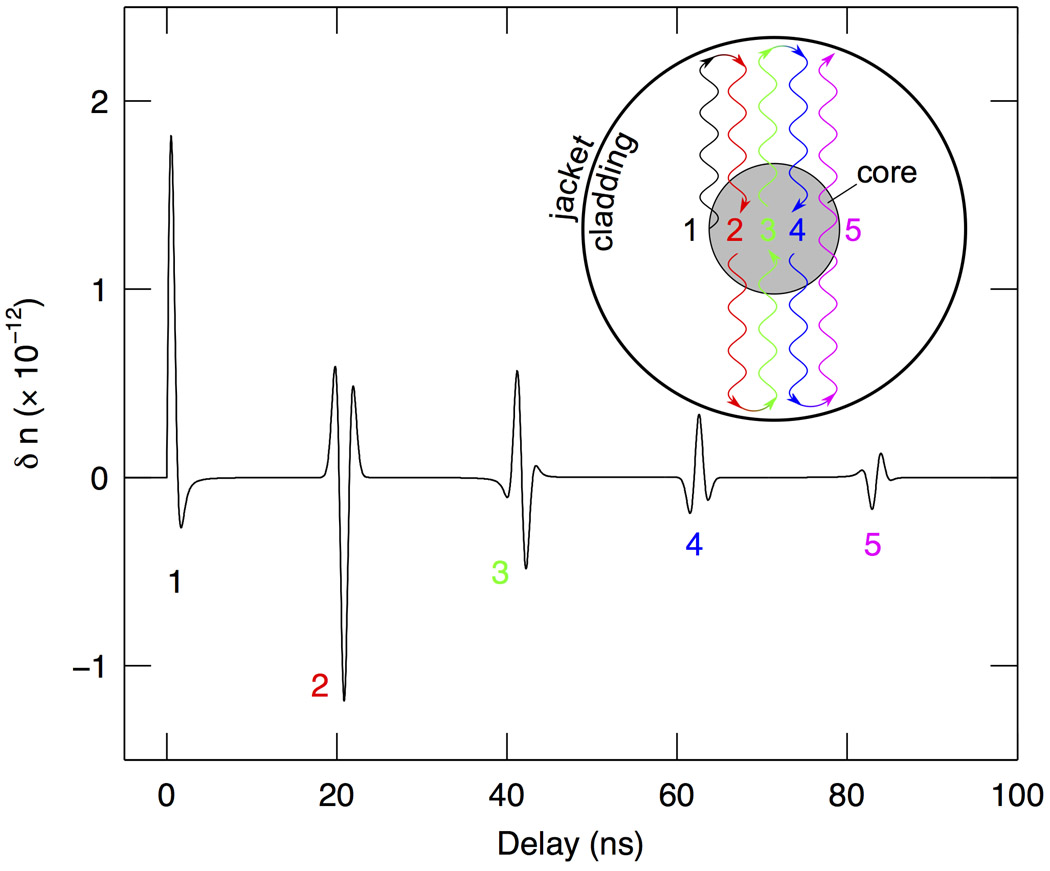 Figure 2. Calculated refractive index perturbation (δn) caused by the excitation of acoustic waves under our experimental conditions. The spikes repeat at intervals of 21ns, which corresponds to the time it takes for sound waves to reach the cladding-jacket boundary and reflect back to the core. This is schematically illustrated in the inset.

To confirm the acoustic origins of the interactions, we have probed the dynamics when the soliton separation is adjusted to match the first echo at 21ns. This corresponds to a separation of more than 8000 times the 2.6ps width of the individual solitons. Figure 3 shows results from four distinct measurements with different initial separations, juxtaposed on the same graph. (The leading soliton at zero delay is omitted for clarity.) Complex dependence on the initial separation is observed, yet this is precisely what is predicted by a theoretical model incorporating the calculated acoustic response (solid red line). Compounded by the fact that no interaction is observed between echoes, this confirms that the solitons interact through sound. 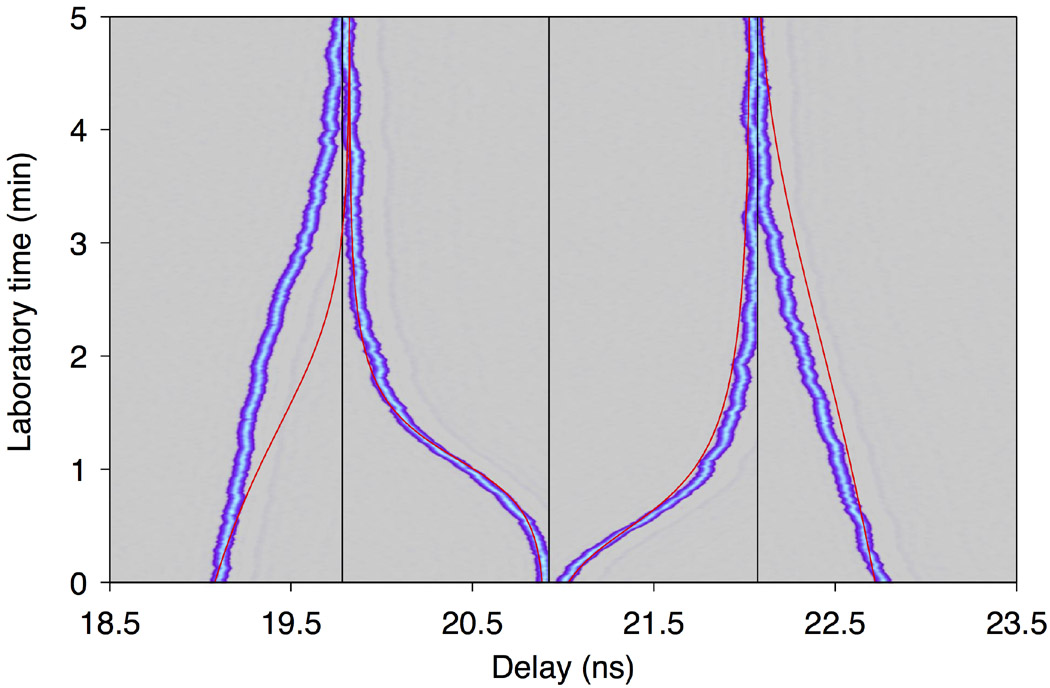 Figure 3. Evolution of the trailing cavity soliton for four distinct initial separations, extracted from the oscilloscope trace as in Figure 1. The leading cavity soliton at zero delay is omitted for clarity. Red solid curves correspond to numerical simulations incorporating the acoustic response.

To the best of our knowledge, the interactions we have identified represent the weakest, most long-range interactions ever observed for solitons in any physical system.8 The interactions are so weak that they become observable only after the solitons have traveled for millions of kilometers. The fact that such weak interactions can even be observed in a noisy laboratory environment is remarkable, and highlights the robustness of solitons like never before. In addition to fundamental significance, unleashing the applications potential of temporal cavity solitons demands detailed understanding of their interactions. We are now exploring routes to suppress the interactions, and anticipate that our work will have tremendous impact on applications linked to cavity solitons such as all-optical buffers and microresonator-assisted pulse train generators.10, 12

We acknowledge support from the Marsden Fund administered by the Royal Society of New Zealand.

Miro Erkintalo is a lecturer in physics. He holds a DSc (technology) from Tampere University of Technology, Finland. His research involves various themes in ultrafast and nonlinear optics, including supercontinuum generation, mode-locked fiber lasers, and passive resonators.

Jae K. Jang is a PhD candidate focusing on experimental studies of temporal cavity solitons in passive fiber ring resonators. In 2011, he received a bachelor of technology degree, majoring in optoelectronics, from the University of Auckland.

Stuart Murdoch is a senior lecturer in physics. His research interests include laser physics, fiber optics, and nonlinear optics.

Stéphane Coen holds a PhD in physics engineering from the Free University of Brussels, Belgium. His research interests include supercontinuum generation as well as the nonlinear dynamics of passive resonators. Lately, he has been studying temporal cavity solitons, both theoretically and experimentally, and how these can be used to provide a theoretical framework to microresonator Kerr frequency combs.