The chemical industry—one of the most important technological and economic backbones of Japan—consumes a massive amount of fossil fuel resources and emits a large amount of carbon dioxide. We have recognized the environmental and economic risks of continuing mass consumption of non-renewable fossil resources with limited amounts of deposit. Thus, groundbreaking innovation in chemical product manufacturing is an urgent need to overcome such environmental, resource, and economical problems.

In modern chemical industry, hydrogen is a major feedstock of a variety of valuable chemicals. Photoelectrochemical (PEC) water splitting using sunlight has attracted much attention as a means of producing renewable hydrogen on a large scale.1 Hydrogen produced from water in a solar hydrogen plant can be separated and purified with a separation membrane and, together with carbon dioxide emitted from chemical plants, supplied for olefin synthesis in catalyst reactors.2 A series of these processes is referred to as artificial photosynthesis. The target solar-to-hydrogen conversion efficiencies for cost-competitive production of solar hydrogen are suggested to be 10%. However, before this goal can be achieved, many challenges that face improved energy conversion efficiency must be addressed. The major issue is the lack of materials that can split water under sunlight efficiently and stably, as well as material processing techniques to fabricate photoelectrodes in a scalable and versatile manner.

Particulate (oxy)nitride and (oxy)chalcogenide semiconductors absorb a wide range of visible light wavelengths and are applicable to PEC water splitting when immobilized onto conductive substrates, although their efficiency has been limited because of the resistance loss at grain boundaries. This problem can be addressed by the necking treatment, i.e., bridging semiconductor particles with binder materials that have similar band edge potentials for carrier conduction. Unfortunately, the effect and versatility of the necking method is limited because its treatment conditions are restricted by the stability of the semiconductors and conductive substrates.

We developed the particle transfer (PT) method to address the need of new photoelectrode fabrication techniques that do not rely on the necking treatment.3 Figure 1 schematically shows the processes of the PT method. First, semiconducting powder is piled on a glass plate. Then, a thin metal layer is deposited as a contact layer. The choice of metal is key to establish a favorable electrical contact between the semiconductor particles and the metal layer. After that, continuous metal films are deposited for adequate conductivity and mechanical strength. The resulting film is transferred to another substrate and the primary substrate is peeled off. The excess powder is removed by ultrasonication in water. The semiconductor/metal films obtained are characterized by excellent mechanical and electrical contact between photocatalyst particles and conductive films, and work as photoelectrodes. 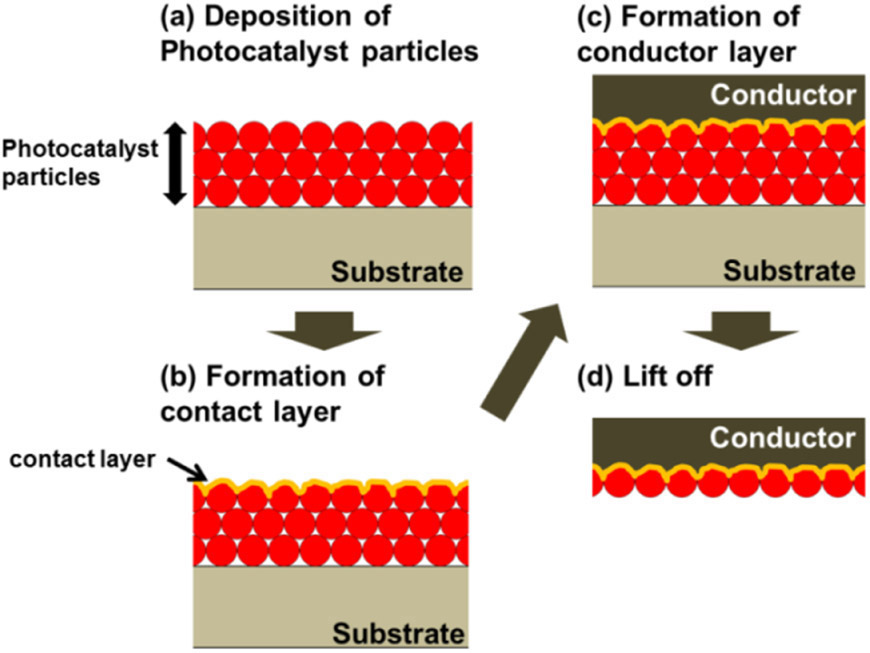 Figure 1. The particle transfer method for the fabrication of photoelectrodes of particulate semiconductors. (Reprinted with permission from the Royal Society of Chemistry, ©2013.3)

To examine the validity of our new method, we prepared photoanodes of the oxynitride LaTiO2N particles by PT, as well as conventional electrophoretic deposition followed by the necking treatment.3 The photoanodic current of LaTiO2N photoanodes prepared by the PT method exceeded 3mA/cm2 at +1.23V compared with a reversible hydrogen electrode (RHE) under simulated sunlight irradiation. By contrast, the photoanodic current of LaTiO2N electrodes deposited by the conventional method on fluorine-doped tin oxide substrates was an order of magnitude lower under similar conditions. The PT method produced much higher photoanodic current because of the smaller resistance for carrier migration. The higher photocurrent directly resulted in higher solar-to-hydrogen conversion efficiency.

The PT method is applicable to the fabrication of photoelectrodes of general particulate semiconductors. Copper gallium selenide (CGS) materials are promising candidates for photocathodes for solar water splitting because of their stability, long absorption edges, and tunable band structures. However, large-scale manufacturing of CGSe photocathodes is difficult because they are typically prepared under high vacuum in non-equilibrium conditions. The PT method offers an elegant solution to avoid such problems.4 We prepared CGSe particles by solid state reactions of Cu2Se (copper (I) selenide) and Ga2Se3 (gallium (III) selenide). Note that various copper-deficient CGSe could easily be prepared by tuning the molar ratios of the precursors. We then fabricated photoelectrodes of CGSe by the PT method using molybdenum and titanium as the contact and conductor layers. Here, molybdenum was layered on to the CGSe to establish an ohmic contact. The resulting CGSe photoelectrodes exhibited photocathodic current, meaning that the prepared particulate CGSe was a p-type semiconductor. After surface modifications with an n-type CdS (cadium sulfide) layer for p/n heterojunction and platinum nanoparticles as a hydrogen evolu tion catalyst, both the cathodic photocurrent and the onset potential of CGSe photocathodes were significantly increased.

We also used the PT method to fabricate photoelectrodes of well-crystalline oxychalcogenide La5Ti2CuS5O7 particles,5 as this material and its potential as photoelectrodes has not previously been characterized owing to the lack of suitable fabrication methods. La5Ti2CuS5O7 photocathodes fabricated by the PT method exhibited the photocurrent onset potential of +0.88V compared with RHE in PEC water splitting, which was one of the most positive potentials among any existing single p-type semiconductor photocathode. Such remarkable properties revealed La5Ti2CuS5O7 to be one of the most promising photocathode materials for a p/n-PEC cell, as the photocathodic current at the positive potential is a critical factor that determines the overall efficiency. The incident photon-to-current efficiency is still on the order of 1% at present, although boosting the pho tocathodic current of La5Ti2CuS5O7 further contributes to efficient solar hydrogen production.

In summary, the PT method enables us to apply various semiconducting particles as photoelectrodes. Certain (oxy)nitrides and (oxy)chalcogenides have been found to exhibit promising properties for PEC water splitting. To render such attractive photoelectrodes useful on a practical scale, the photocurrent and the photocurrent onset potential must be improved significantly. To address these issues, we will extend our efforts to the preparation of high-quality semiconductor particles and the design of new photoelectrode architectures.

The author thanks Grants-in-Aid for Specially Promoted Research (no. 23000009) of the Japan Society for the Promotion of Science and the Artificial Photosynthesis Project of the Ministry of Economy, Trade and Industry of Japan.