A new nano-optical tweezer enables capture and analysis of individual proteins, as well as single-protein interactions with small-molecule drugs and with DNA.
22 May 2014
Reuven Gordon

Fluorescence is a leading optical method in biosciences and biotechnology. It is ubiquitous in microscopy, flow cytometry, and analytical assays. Yet the technique suffers from bleaching (when a fluorescent particle no longer emits light due to excitation), blinking (when the emission of a particle turns off intermittently), and low signal for single-molecule applications. At a more fundamental level, fluorescent labels disrupt the natural state of a biomolecule, which opens up data to interpretation, while also requiring costly processing and instrumentation.

We recently presented work on laser tweezers that may eventually displace fluorescence in many applications. This novel device operates for an extended time, using only the intrinsic light scattering of the trapped object. The signal-to-noise and data rates are at orders of magnitude greater than fluorescence. Moreover, the tweezer offers a label-free, single-molecule, low-cost approach that operates in free solution, without the need for tethers (a ligand attachment that immobilizes a molecule or nanoparticle at a surface), which can disrupt molecular motion and block potential binding sites.

Key to this new laser tweezer's performance is the double nanohole. This aperture makes laser tweezers a thousand times more efficient than the conventional optical tweezers that were introduced in 1986, so that we can achieve trapping with low laser power.1 Unlike traps that use surface plasmon resonance,2 the aperture is not designed to operate on resonance and the heating is therefore much lower. In addition, the gold film surrounding the double nanohole efficiently removes any heat that is generated locally. Unlike cylindrical or rectangular shaped apertures,3, 4 the double nanohole provides two closely spaced sharp cusps that are critical for trapping individual particles in the single-digit-nanometer range. The double-nanohole laser tweezer works using a conventional inverted microscope laser-trapping system, as depicted schematically in Figure 1. 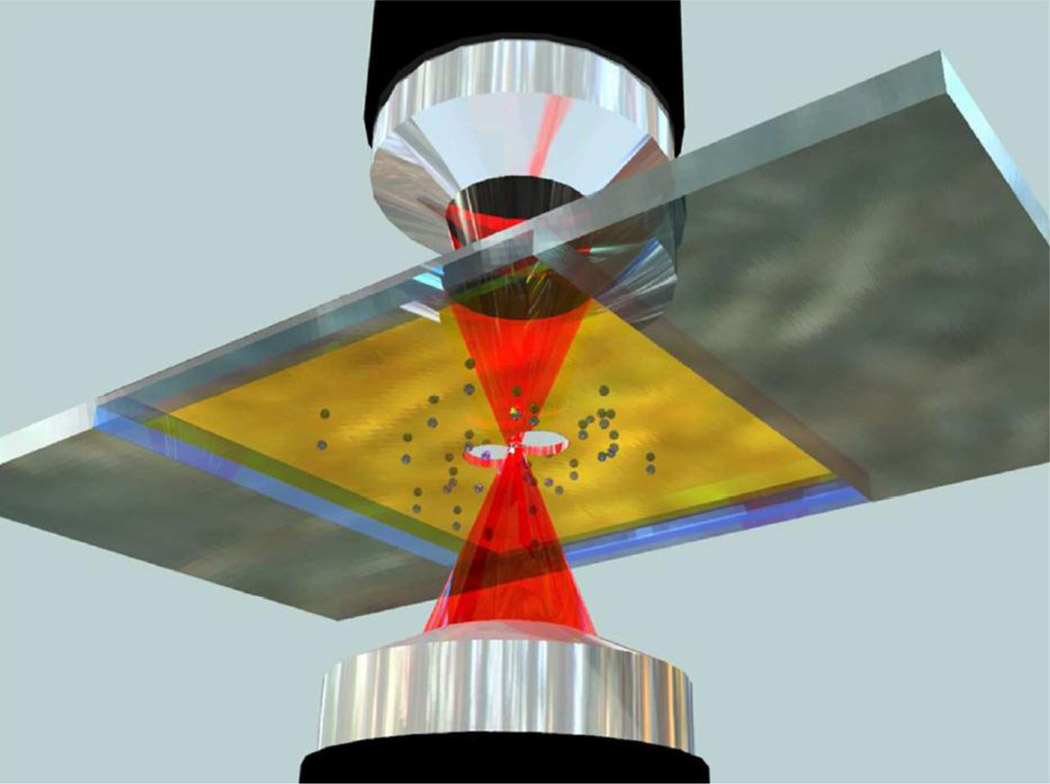 With this new approach it is possible to grab hold of proteins of tens of kilodaltons in mass. For such particles in the single-digit-nanometer range, the energy for trapping is approximately 10 times the thermal energy, so that it is possible to maintain stable trapping of a single molecule on the timescale of hours. The optical tweezer also pulls on the proteins by the physical process of ‘dielectrostriction.’ This pulling force is capable of unfolding some proteins,5 and even unzipping DNA.6 While this is not always a desired property, it does have benefits, for example, in studying protein folding (and more generally, ‘molecular dynamics’) in real time.

We can observe the binding of proteins to small molecules in real time with the double-nanohole tweezer. When a small molecule interacts with the protein binding site, it changes the molecular dynamics of that protein, which we can observe from abrupt changes in the laser scattering. For example, we showed it is possible to identify when acetylsalicylic acid (aspirin) binds to a blood protein (see Figure 2). This is of practical interest in evaluating potential small-molecule candidates in drug discovery applications. Also of interest to assays, we have demonstrated antibody binding to a trapped protein. 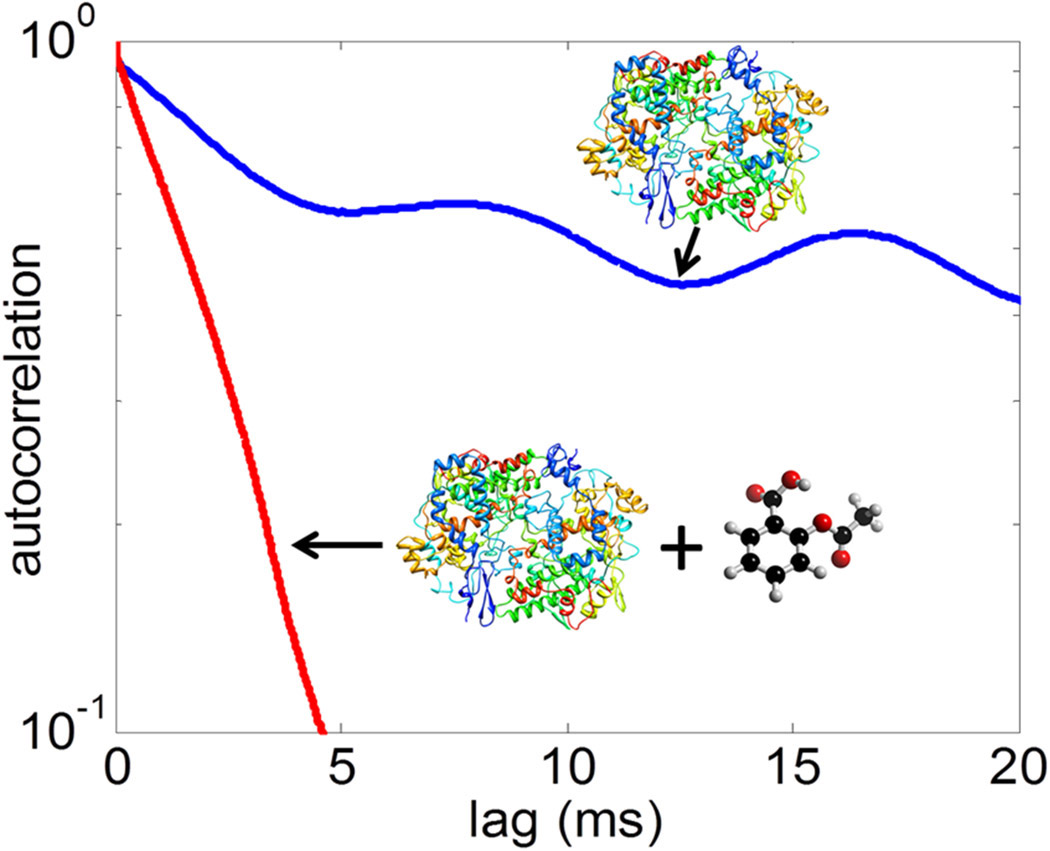 Figure 2. Variations in laser-scattering autocorrelation show clearly the aspirin-binding-induced changes to the molecular dynamics of the COX-2 protein.

Protein-DNA interactions play an important role in biological systems and are also implicated in diseases. Trapping and unzipping DNA strands provides the opportunity to study such interactions. For example, we recently showed that p53, a protein that is mutated in over half of the known cancers, delays the unzipping of DNA in the double-nanohole tweezer.6 From the time delay, it was possible to estimate that p53 prevents unzipping with 10 times the thermal energy. Perhaps more interestingly, we found that a mutant form of p53 does not delay the DNA unzipping at all. These results are shown in Figure 3. Others have speculated that this approach may also be adapted for DNA sequencing. 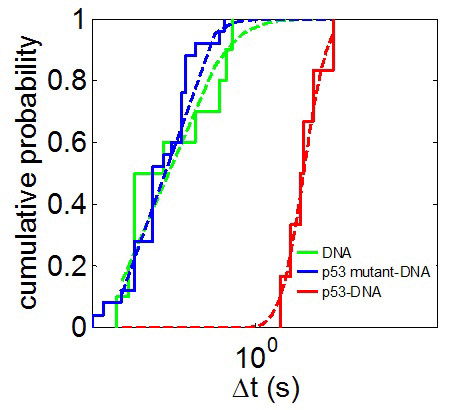 Figure 3. Quantifying the role of anti-tumor protein p53 in suppressing DNA unzipping (by increased unzipping delay, Δt), as well as the ineffectiveness of a mutant form of p 53.

An exciting feature of the double-nanohole optical tweezer is the potential to isolate single nanoparticles at the end of an optical fiber. In doing so, it may be possible to move the particles to a different solution or a different part of the sample: just like a pipette, but at the single-molecule level. Other groups have made significant progress toward this goal by trapping with apertures at the end of cantilever-type probes4 and translating particles at the end of tapered fiber probes.7, 8 Furthermore, for the first time, we have integrated the double nanohole at the end of a cleaved fiber, which may prove less costly and less prone to damage than a tapered fiber solution. This approach does not require a microscope or even a lens to operate: only fiber-based components and a broad-area detector. The potential applications of such a low-cost, scalable, and robust approach are vast, such as the study of infection at the single-virion level.

While it is unlikely that the double-nanohole tweezer will displace fluorescence for embedded applications in the short term, our early-stage demonstrations have already shown the potential in several different types of single-molecule protein studies. We and others9 have already started investigating Raman approaches to identifying nanoparticles. Other applications may include the study of heterogeneity in virus populations and the manipulation of nanoparticles for study and assembly.10

Reuven Gordon (PhD, Cambridge) is the Canada Research Chair in Nanoplasmonics and an associate professor. He has received awards from CATA (2001), Accelerate BC (2007), AGAUR (2009), and the Craigdarroch Silver Medal (2011). He has authored more than 100 journal papers.