Digital holography for multidimensional sensing with a monochromatic image sensor

Digital holography1 is a promising technique with applications in microscopy, multimodal imaging of dynamically changing phenomena, and other types of multidimensional sensing. In conventional holography, an interference fringe image called a hologram is recorded and later can be used to produce a 3D image. With digital holography, however, an image sensor obtains the complex amplitude distribution of a wave diffracted from an object and a computer reconstructs both the 3D image and the quantitative phase distribution of the object simultaneously. By using an interferometric technique, multiple types of information such as the polarization state of light2 and the wavelength dependency of data3 can be simultaneously captured with a single-shot exposure of a commercially available monochromatic image sensor. However, the quality of the reconstructed object image is degraded because such sensors have a limited space-bandwidth product. We have developed a method to extend the space bandwidth, named space-bandwidth capacity-enhanced (SPACE) digital holography,4 which we have used to carry out multidimensional sensing.

In interferometry, including digital holography, two or more holograms are multiplexed into a single image in the space domain. In the spatial frequency domain, the complex amplitudes of each object wave can be selectively extracted from the Fourier-transformed image of the recorded intensity distribution. Therefore a monochromatic image sensor can record multiple information by exploiting different spatial frequencies of interference fringes.2,5,6 The technique called angular multiplexing combines multiple holograms by using reference waves with different wavelengths and polarization states to illuminate an image sensor from different directions. In digital holography, however, the lack of space bandwidth available for recording an object wave causes unwanted image components (i.e., the 0th-order diffraction wave and the conjugate image) to be superimposed on the desired image.

Our method of solving this problem, SPACE, is based on the periodicity of a digital signal7 and intentional aliasing (shifting of components in the spatial frequency domain). The technique requires proper arrangement of the spatial frequency spectrum and the incident angle θ between the reference wave and the object wave (see Figure 1). The incident angle of the reference wave in the x-z or y-z plane must be large to produce the aliasing. When θ is larger than sin−1(λ/2d), where λ is the wavelength used for recording a hologram and d is the pixel pitch of the image sensor, the interference fringes are too fine to be captured correctly by the image sensor, which results in an undersampling of the fringes and produces aliasing. The amount of aliasing depends on the wavenumber of the object wave. Thus we obtain an interference fringe pattern in which the spatial frequencies are modulated by the undersampling. By utilizing this modulation, we avoid the superimposition of the 0th-order wave on the object wave in the space and spatial frequency domains even when an object wave with wide space bandwidth is recorded. Therefore, the space bandwidth can be extended by the principle described above. Note that the finite aperture of each photodetector causes the interference fringes to be attenuated.8 By applying SPACE to angular multiplexing, we expect to extend the space bandwidth and improve the quality of the reconstructed image. 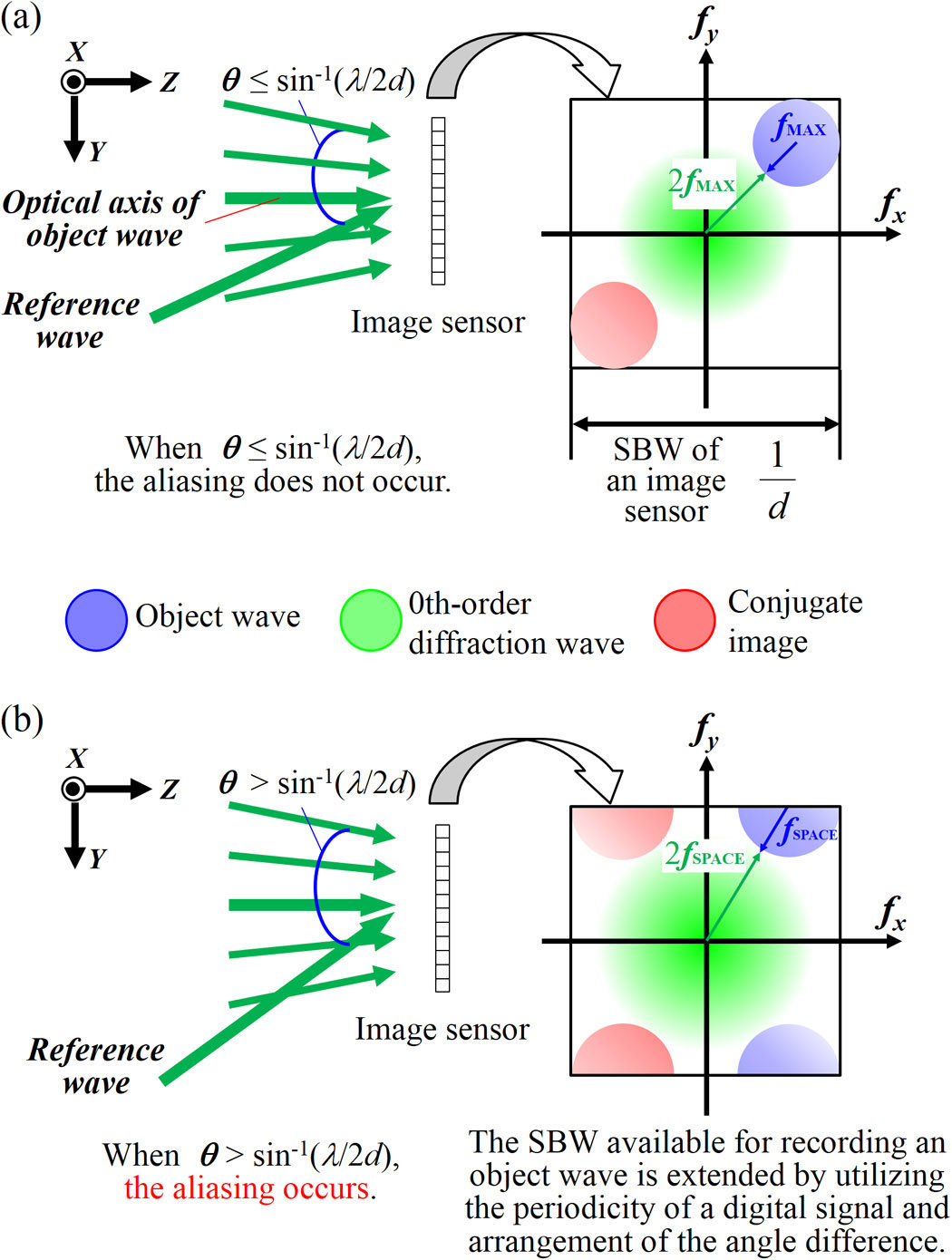 Figure 1. Principle of space-bandwidth capacity-enhanced (SPACE) digital holography. Schematic of the two waves and the spatial frequency (f) spectra of holograms obtained (a) without aliasing and (b) with aliasing introduced by a large tilt (angle θ). The aliasing permits fSPACE to be larger than fMAX. λ: Wavelength. d: Pixel pitch of image sensor. MAX: Maximum. SBW: Space bandwidth.

Highly accurate 3D shape information can be reconstructed from quantitative phase images of different wavelengths by a technique called multiwavelength phase unwrapping. We numerically simulated single-shot multiwavelength phase unwrapping with the combination of SPACE and angular multiplexing to verify the effectiveness of our new digital holography method9 (see Figure 2). Although a conventional method5 was also able to reconstruct the 3D surface shape, that approach could not avoid the superimposition of unwanted image components when wide space bandwidth was required. In contrast, the numerical results showed that highly accurate 3D shape measurement can be achieved with SPACE. We calculated the rms errors between the object and images to be 11.1 and 3.4nm for the conventional method and SPACE, respectively. Thus, our simulations verified that SPACE can achieve highly accurate quantitative phase imaging. 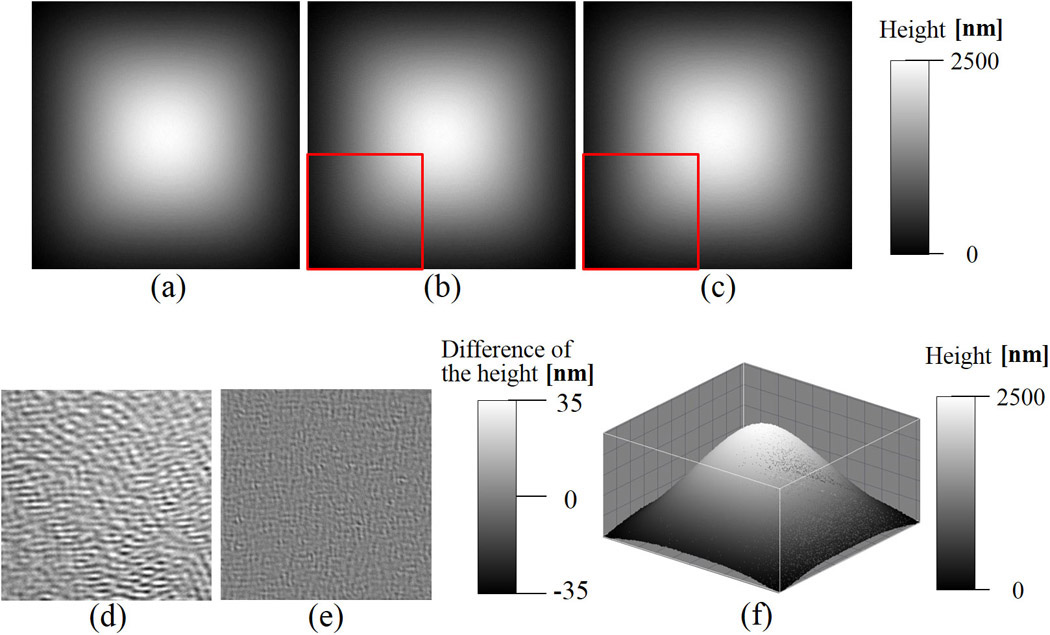 Figure 2. Numerical results of single-shot multiwavelength phase unwrapping using angular multiplexing with wavelengths of 488 and 532nm. The object (a) is reconstructed as 3D shape images obtained with (b) a conventional configuration and (c) SPACE. The differences between the object and the reconstructions in the areas indicated in (b) and (c) are shown in (d) and (e), respectively. (f) 3D rendering of the SPACE image.

We have experimentally demonstrated simultaneous recording of a 3D image and multiwavelength information using SPACE combined with angular multiplexing.9 Figure 3 shows our experimental setup. We recorded a wavelength-multiplexed image by using a single-shot exposure, and we reconstructed information from that image at each wavelength (see Figure 4). When we used SPACE, the multiwavelength information was successfully reconstructed without crosstalk between the wavelengths and without superimposition of the unwanted image components.

In summary, we have developed a digital holography technique that increases the space bandwidth available for a variety of 3D imaging and multidimensional sensing applications. In future work, we expect to apply the method to record multispectral 3D moving pictures and to measure polarization in 3D images.10 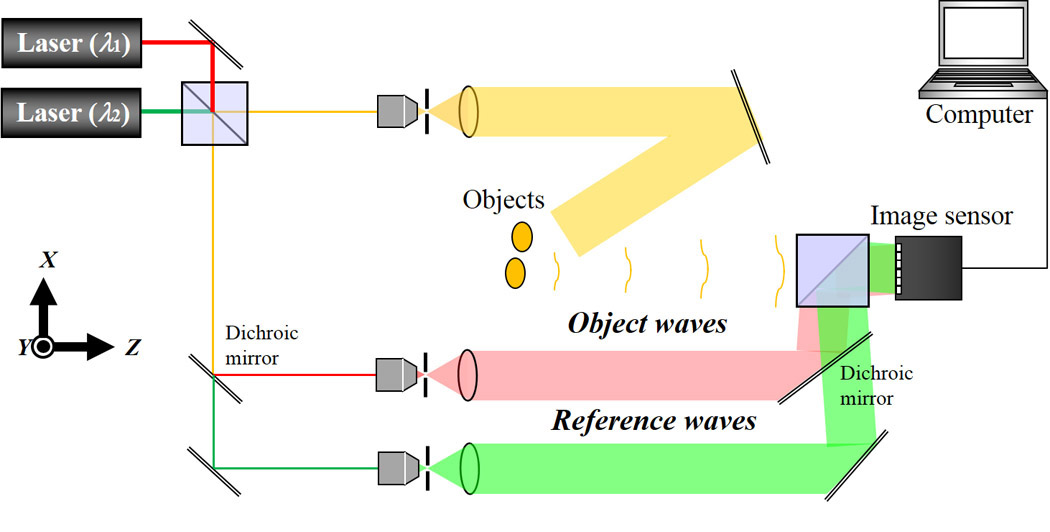 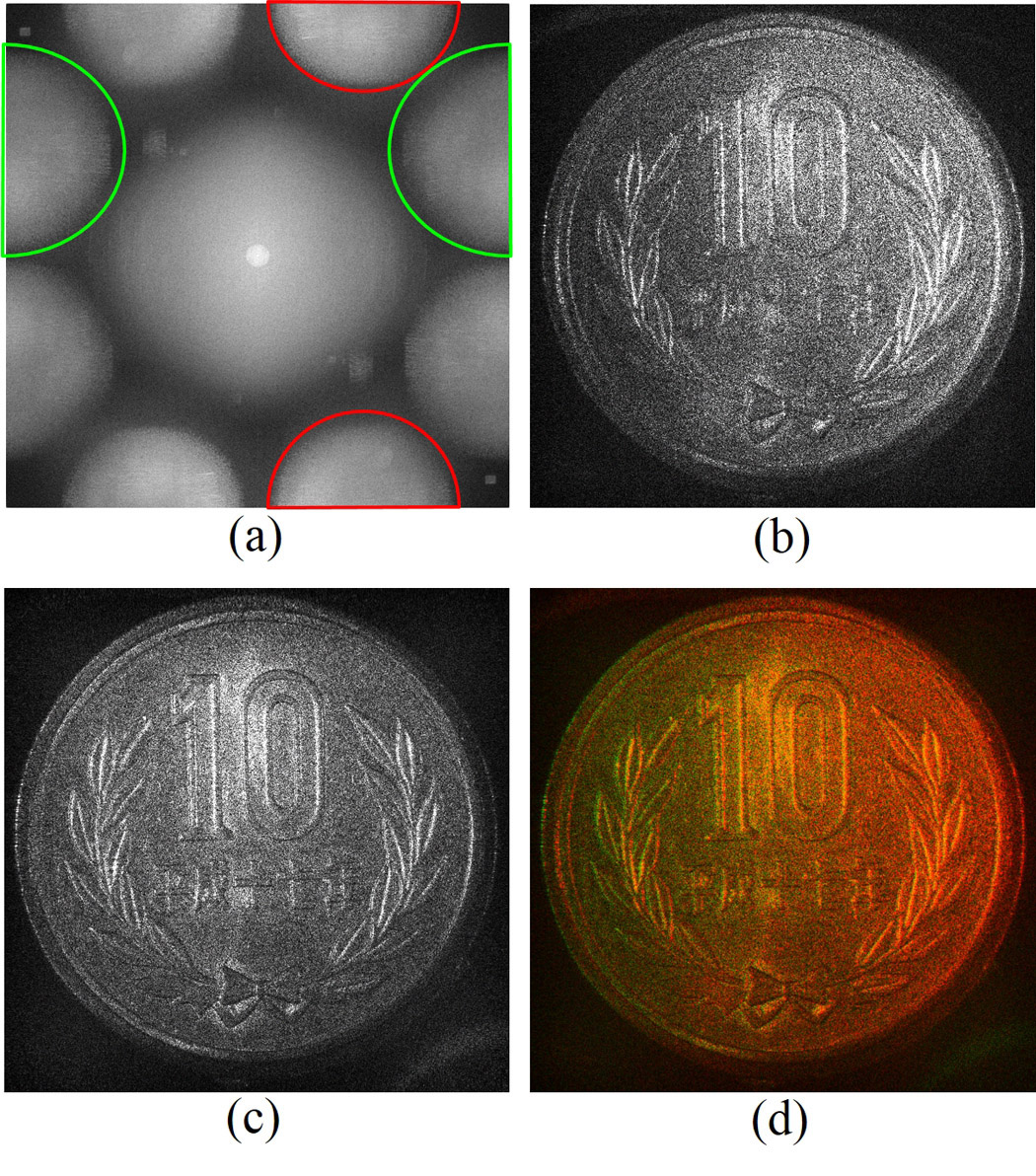 Figure 4. Experimental results of multiwavelength digital holography using angular multiplexing to image a 10-yen coin. (a) Spatial frequency distribution of an image obtained using SPACE. Red and green outlines indicate the spectra of the object waves at 640 and 532nm, respectively. Reconstructed images obtained with SPACE at (b) 640nm and (c) 532nm. (d) Color-synthesized image obtained from (b) and (c).

This work was partially supported by the Research Foundation for Opto-Science and Technology, the Japan Science and Technology Agency (JST) A-STEP feasibility study program (AS251Z00797H), the Grant-in-Aid for Research Activity Start-up 25886014 of the Japan Society for the Promotion of Science (JSPS), and the MEXT-Supported Program for the Strategic Research Foundation at Private Universities.

Tatsuki Tahara received his BE, ME, and D.Eng in electronics and information science from the Kyoto Institute of Technology, Japan, in 2007, 2009, and 2013, respectively. He is an assistant professor. His research interests include digital holography and multidimensional imaging.

Yuki Takahashi is currently working toward a BS in mechanical engineering at Kansai University. His research interests include digital holography.

Yasuhiko Arai received his BS and MS in mechanical engineering from Kansai University in 1977 and 1979, respectively. In 1988 he received a D.Eng from Osaka University. He is a professor. His current research interests include fringe analysis, 3D measurement using scanning electron microscopy and speckle interferometry, and moiré fringes.