Seven telescopes with a novel dual-mirror configuration are proposed as part of the Cherenkov Telescope Array.
14 May 2014
Stefano Vercellone and the ASTRI Collaboration for the CTA Consortium

The very-high energy (VHE) portion of the electromagnetic spectrum (greater than about 100GeV) can currently be studied using ground-based imaging atmospheric Cherenkov telescopes (IACTs).1 These telescopes measure the radiation that is emitted when charged particles travel faster than light in a medium. The proposed Cherenkov Telescope Array (CTA)2, 3 will improve upon the current performance of IACTs and will broaden the VHE science that can be achieved. For instance, many new—and more distant—astronomical gamma-ray sources will be investigated with the CTA. Studies of new gamma-ray source classes in the TeV range (e.g., gamma-ray bursts, galaxy clusters, and galactic binaries) will provide novel insights into fundamental physics parameters.

The CTA will have an extremely wide energy band (30Gev–100TeV), an order of magnitude improvement in sensitivity over current gamma-ray telescopes, as well as optimal angular (0.1° at 0.1TeV; 0.05° at 1TeV) and energy (≤25% at 50GeV; ≤10% at 1TeV) resolutions. Construction of two arrays—one in the northern hemisphere and one in the southern hemisphere—will begin in 2015 and will provide all-sky coverage. The current CTA design features four large-size telescopes (LSTs)—with diameters of about 23m—at the center of the array, which will lower the energy threshold to 30GeV. Twenty-five medium-size telescopes (MSTs)—with diameters of about 12m—will cover an area of about 1km2 and will improve the array's sensitivity between 0.1 and 10TeV by a factor of 10. In addition to the LSTs and MSTs, there will be 24 medium-size Schwarzschild-Couder dual-mirror telescopes—with primary mirror diameters of about 9.5m—and 50–70 small-size telescopes (SSTs) at the southern hemisphere site. The SSTs have primary mirror diameters of about 4m, effective areas of 5–10m2, and will be installed over a 10km2 area. These properties will improve the angular resolution in the 0.1–10TeV energy range and will allow studies of galactic plane sources to be extended beyond 100TeV.

Within the ASTRI (Astrofisica con Specchi a Tecnologia Replicante Italiana) project of the Italian National Institute for Astrophysics (INAF), we are currently developing an end-to-end prototype of the CTA small-size telescope in a dual-mirror configuration (SST-2M). The configuration we have proposed4 is based on a Schwarzschild-Couder aplanatic design that has not been used for Cherenkov telescopes before. In our design (see Figure 1),5 the focal plane is located between two aspherical mirrors, close to the secondary mirror. The segmented 4.3m primary mirror is composed of 18 facets, and the monolithic 1.8m secondary mirror has a 2.2m radius of curvature. The telescope has a focal length of 2.15m and a 9.6° field of view (FOV). The mirrors will be manufactured via the 'glass cold-shaping' technique that we have specifically developed for the CTA. The curved focal plane (with about 1m radius of curvature) hosts 1984 logical pixels (6.2 × 6.2mm, 0.17°). We are currently using Hamamatsu S11828-3344M silicon-based photo-multipliers (SiPMs) as light detectors, but we are also testing alternative sensors. 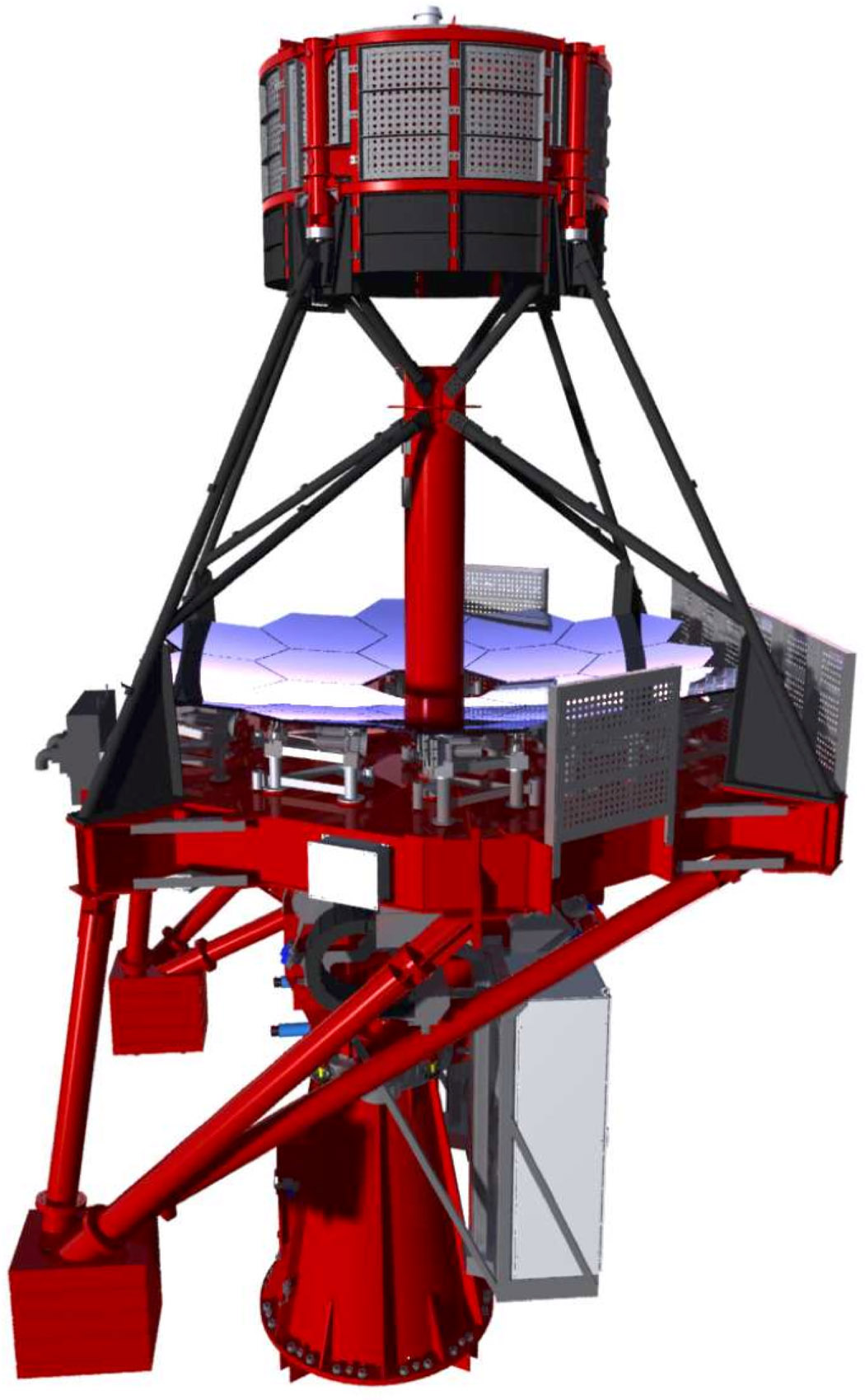 The camera that we use at the focal plane of the ASTRI SST-2M is compact (about 50 × 50 × 50cm) and light (about 50kg). Unlike with other CTA telescopes, we will use the CITIROC6 front-end electronics to read out data from the SiPMs. The CITIROC electronics are a customized version of the EASIROC7 application-specific integrated circuit signal-shaper that is produced by Omega.8 An ASTRI SST-2M camera image for an on-axis simulated primary gamma-ray event is shown in Figure 2. 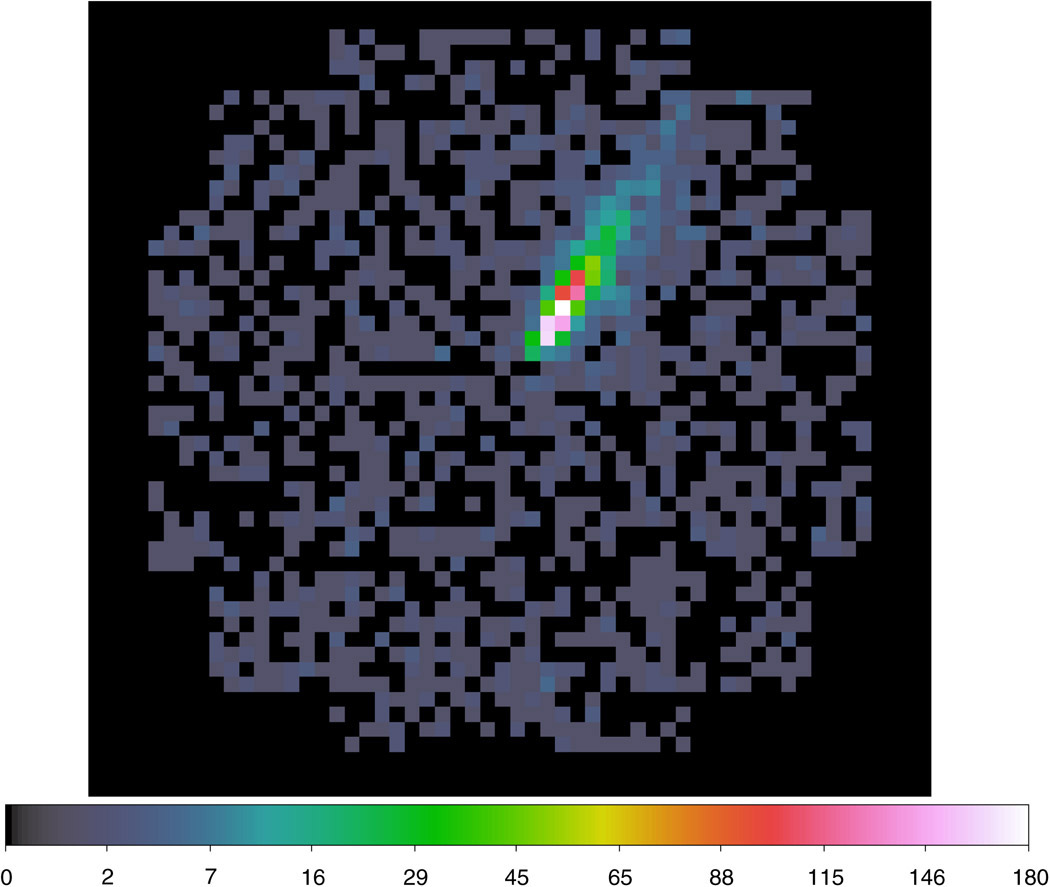 We have performed preliminary Monte Carlo simulations that demonstrate the significant improvement an array of SST-2M telescopes (see Figure 3) would represent over current gamma-ray astronomy facilities. An array of seven SST-2M, for example, would provide a better sensitivity (between 10 and 100TeV) than the High Energy Stereoscopic System (H.E.S.S.).10 With this ASTRI-CTA mini-array, it would be possible to perform detailed studies of relatively bright sources (a few ×10−12erg cm−2s−1 at 10TeV) with an angular resolution of a few arcminutes and an energy resolution of 10–15%. We expect to conduct the first CTA science studies within the first year of ASTRI-CTA mini-array operations.11 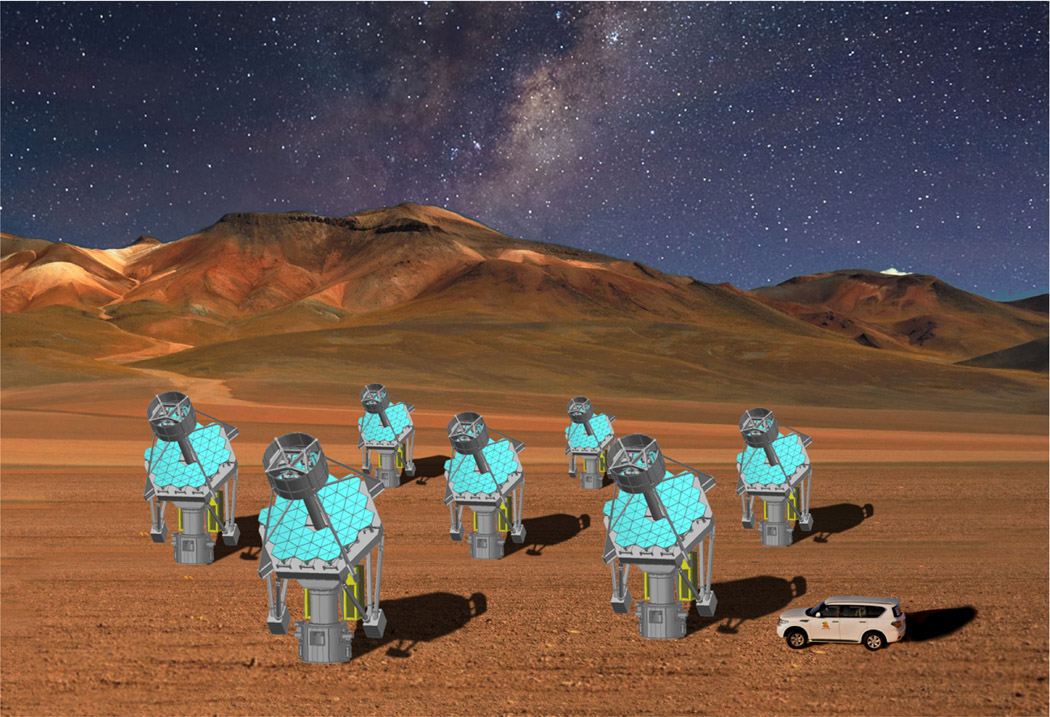 The ASTRI-CTA mini-array will preferentially be operated with long exposures. Although this restricts the number of possible targets, observations can be extended into moonlit periods due to our use of an SiPM-based camera. A preliminary simulation of the Cygnus region is shown in Figure 4. The expected performance is based on the AstriSim,12 as well as the GammaLib and ctools,13 simulation codes. Although the Cygnus region is located in the northern hemisphere and the ASTRI-CTA mini-array will observe from the southern hemisphere, this simulation illustrates how our array will be able to detect more than one source within its FOV. Analogous simulations can be performed for southern regions, such as that around the Galactic Center. 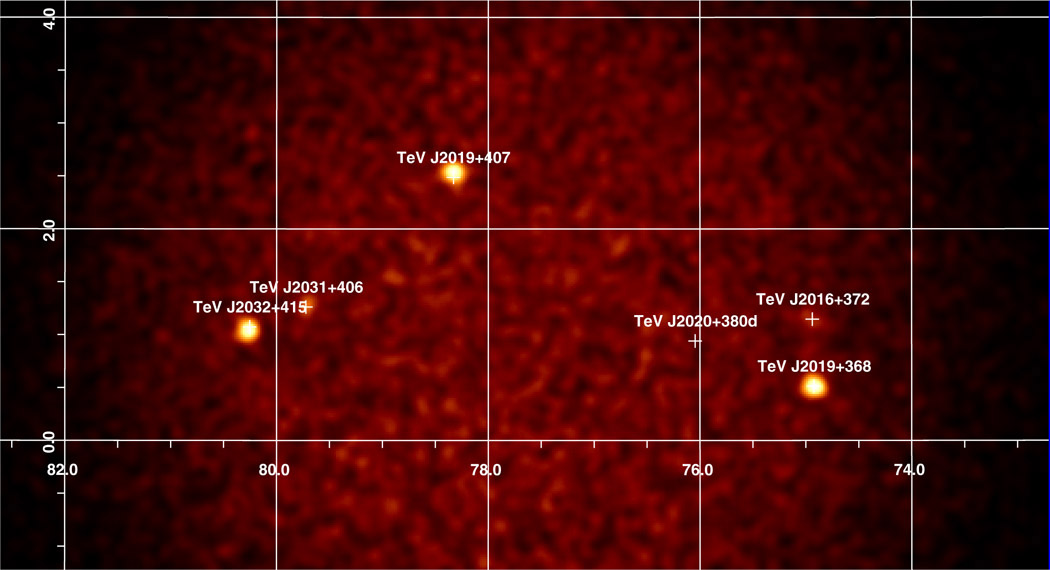 Figure 4. Preliminary ASTRI-CTA mini-array simulation of the Cygnus region. The simulation is centered on galactic coordinates of 77.7° (longitude) and 1.0°(latitude) and was conducted for a net observing time of 150 hours and for energies greater than 3TeV. TeV source parameters (position, flux, spectral index) were derived from an online catalogue of the Italian Space Agency Science Data Center.9

We have designed a small-size telescope with a dual-mirror configuration for use within the CTA. The gamma-ray observations that will be possible with the CTA will revolutionize the field of VHE astronomy and will permit new exploration of prominent sources such as extreme blazars, radio galaxies, galactic pulsar wind nebulae, supernova remnants, and the Galactic Center. We are planning to test the prototype of our telescope later in 2014 at the INAF's M. C. Fracastoro observing station in Serra La Nave, Italy. Although we are building the ASTRI SST-2M primarily as a technology prototype, we will also be using it to make scientific observations of the Crab Nebula and two Markarian galaxies (MRK 421 and MRK 501) as part of our tests.14

This work was partially supported by the ASTRI Flagship Project that is financed by the Italian Ministry of Education, University, and Research (MIUR) and led by the INAF. Partial support was also received from the MIUR Bando PRIN 2009. We gratefully acknowledge support from our CTA partner agencies and organizations.15

Stefano Vercellone is a member of the high-energy astrophysics research group at the INAF. He is the project scientist for ASTRI SST-2M and is also involved with the science operations for the ASTRI-CTA mini-array and the CTA Physics group activities.