In the last few years there has been considerable interest in the development of atmospheric optical wireless communication networks—free space optical (FSO) systems—with a focus on increasing the range of communications and data transfer speeds. In FSO communications data is transmitted wirelessly by light propagating in free space (e.g., air or a vacuum). Increased link ranges and data rates, however, lead to problems that are characterized by high levels of heterogeneity in refractive index (i.e., turbulence in the medium through which the light propagates). These issues arise mainly because reduced photodetector sizes are required for the increased data rates.

An increase in atmospheric turbulence can make it difficult to focus the received optical beam on the photodetector and can lead to a substantial change in the intensity distribution (see Figure 1). These effects are characterized by an increase in spot size, a shift of gravity center, and a structural change. In Figure 1, the typical dimensions of the detecting area are shown compared with a received beam spot. In strong turbulence conditions, there are significant data losses even for gigabit-range receivers. In addition, FSO reception modes are unsuitable for single-mode fibers, which are the most common transmission medium for data traffic speeds of 10Gb/s or more. Various techniques, however, have now been developed to overcome these problems: for example, spatial diversity of receivers and transmitters,1, 2 the use of adaptive optics that are based on deformable mirrors,3 multiwave radiation,4 and special structures for signal modulation.5 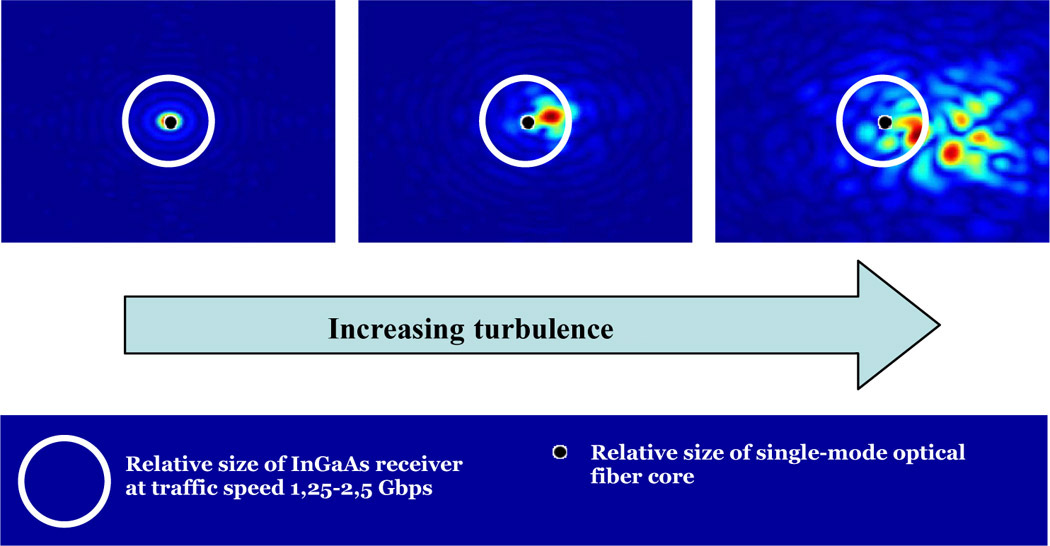 We have developed technology that can be used to achieve wireless optical data transmission at 10Gb/s on an atmospheric optical channel. The design of our Artolink6 equipment is based on previous generations of FSO devices. A simplified block diagram of our system is shown in Figure 2. 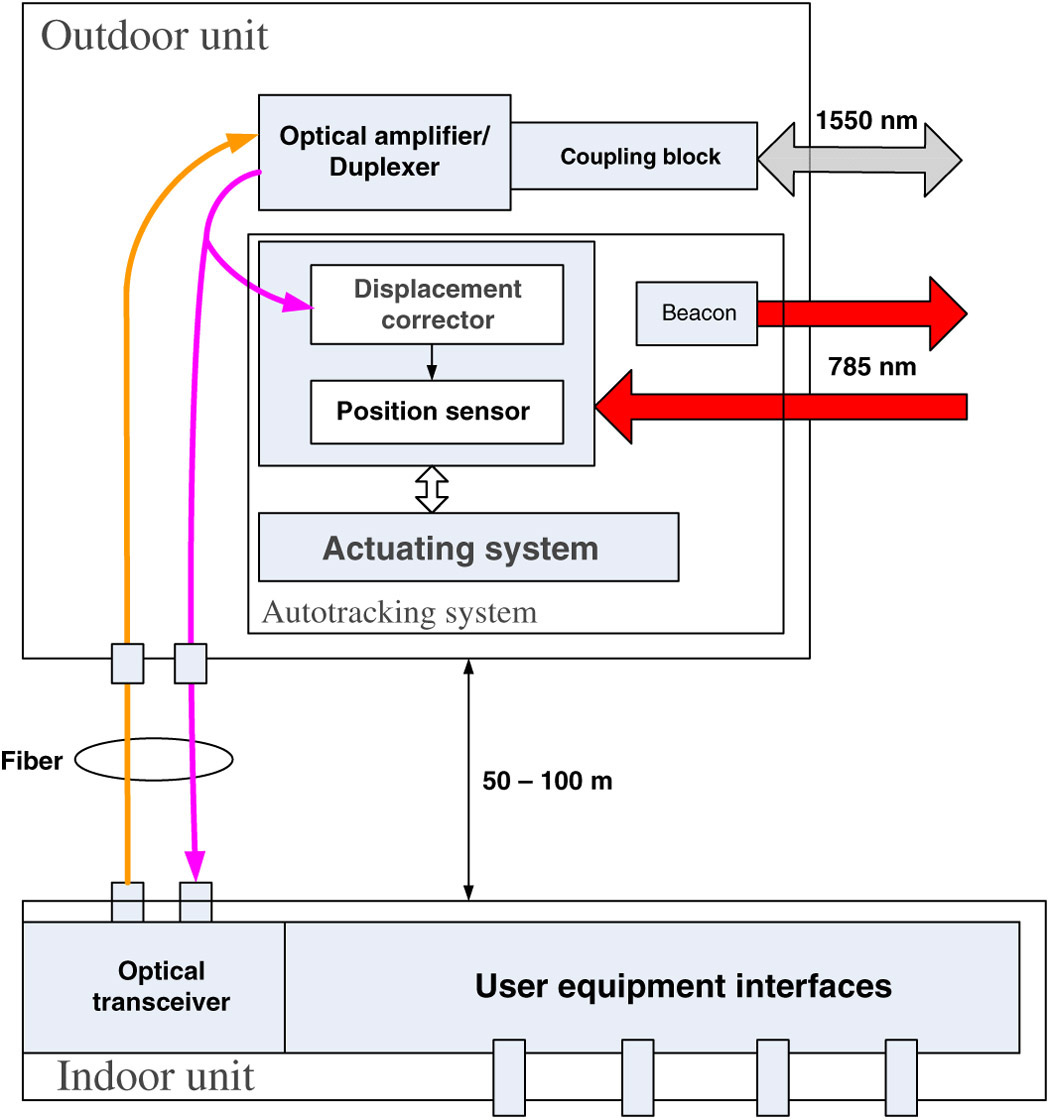 Our design includes several features that have been implemented to guarantee stable information at high transfer speeds. First, the emitted and received beams are coupled through a multimode graded-index optic fiber. Second, we use a rapid auto-tracking device that has an inbuilt position sensor, actuating system, and displacement corrector. Finally, we include duplexers that create more than 60dB of separation between the transmitted and received channels. These features permit data to be transferred across a distance of up to 100m between an outdoor unit (i.e., the FSO system front-end) and an indoor unit (i.e., the optical modem). Our serial FSO products can therefore provide transfer speeds of 1.25Gb/s at distances of up to 5km.

We used BERcut-ETX analyzers to experimentally measure the transmission flow of our equipment at 10Gb/s. The analyzers generated Ethernet traffic at a rate of 10,312.5Mb/s, from which the bit error rate (BER) of the channel was calculated. In April and September 2013 we conducted field experiments at data transfer speeds of 10Gb/s over two distances. In the first case, a distance of 1800m (with a path over a frozen lake) was traversed. The measurements were made in sunny conditions and at an air temperature of about 15°C. Strong atmospheric turbulence was created due to the large difference between the temperatures of the air and the underlying surface. The BER measured at a distance of 1800m was 2×10−11. During our second set of field tests, an error-free information transfer was received by our equipment at a distance of 620m. The link margin was 8 and 23dB over the 1800 and 620m measurement distances, respectively.

In addition to the BER tests, we recorded the signal level that was received by our system, using a digital oscilloscope over different timescales. Even in strong atmospheric turbulence conditions, the average level of received power does not fluctuate by more than 20% (see Figure 3). The stability of our instrument is due to our use of narrow radiation beams, combined with the auto-tracking system. We are therefore able to simultaneously raise the level of the received signal and to reach the maximum possible aperture averaging. 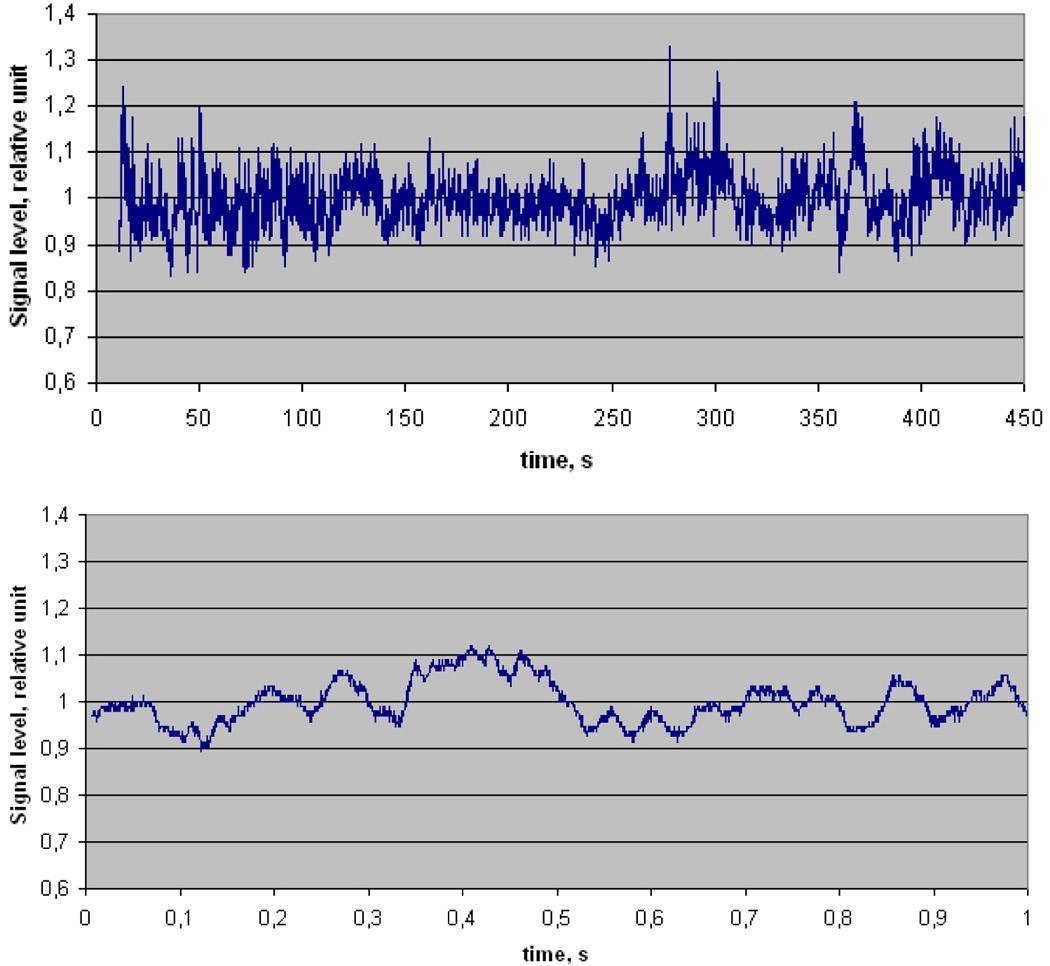 We have conducted field experiments that demonstrate our FSO system can wirelessly transmit data at rates of 10Gb/s over an optical channel in conditions of strong atmospheric turbulence. Our technology is uniquely able to achieve wireless optical communications at such speed and with high quality, over distances of about 2km. In conjunction with a major Internet service provider in Moscow, we recently conducted successful trials of our technique. We are now working to further develop our equipment, based on the Artolink architecture, to accomplish data transfer speeds of up to 100Gb/s.