Photovoltaic (PV) cells are the primary device for converting sunlight directly into electricity. Most are made of silicon, a material relatively cheap to produce, and which has a reasonable ratio of efficiency to cost. However, widespread uptake of PV remains limited because, despite reductions in the price of solar-grade silicon, the total cost of PV energy (in $/kWh) remains high. Furthermore, commercial silicon-based PV cells have relatively low efficiency rates, at around 18% or less. To overcome this technological limitation, we would need to increase the efficiency of a PV cell while maintaining or even decreasing its processing costs.

One common approach to lowering costs is to reduce the quantity of silicon required by using thinner substrates, but this sacrifices efficiency. Instead, to maintain efficiency standards, we can use light-trapping techniques, where more light is absorbed in less silicon. For example, photodiode devices on micro- and nanophotonic structures enable confinement of incoming light inside photonic features, enhancing photocarrier generation. This phenomenon is seen in nanowire resonators,1 which demonstrate efficiency values beyond the Shockley-Queisser limit (the theoretical maximum efficiency of a cell).2, 3 Simultaneously, photoexcited carriers are generated close to the collecting electrodes, boosting the cells' power generation capacity.1–4 However, because of the indirect nature of the bandgap in silicon (where the photoexcited electrons need to be pumped to the conduction band), photons with energy close to or below the bandgap (λ>1150nm) produce negligible photoexcitation, and most IR light is lost.

To overcome this bottleneck, we fabricated silicon photodiodes on spherical microcavities,5 which sustain well-defined Mie (or whispering gallery) modes6—those in which light is trapped in a sphere—in the optical region. These high-Q resonant devices—where Q is a measure of the light-trapping effect of the device—confine IR photons in the cavity for very long times, increasing the probability that they will be absorbed. For example, the light trapped in a Mie mode with Q-factor values, Q∼6×103, for a typical wavelength of 1100nm, would remain in the microcavity for 3.5×10−12 seconds, the time needed to travel a distance of 300μm in bulk silicon (the thickness of a standard silicon solar cell).

To develop rectifying junctions in the particles, we synthesized the silicon microcavities by chemical vapor deposition techniques6 directly onto n-type silicon substrates with an n+ layer implanted on top: see Figure 1. We then annealed the samples at temperatures of between 850 and 1100°C, allowing recrystallization of the microspheres and diffusion of n-type impurities from the substrate into the underside of the particles. Finally, we sputtered a very thin coating (10nm) of indium tin oxide (ITO), and obtained thousands of ITO/sphere/n-Si devices, back-connected through the substrate. Figure 2(a) shows the basic structure of the device, where each sphere is contacted through a conductive atomic force microscope tip, while Figure 2(b) shows a tentative band diagram assuming a PIN-like diode structure (characterized by a semiconductor region between p- and n-type semiconductors).5 To record the spectral response of the devices, we focused a tunable monochromatic light source on the microcavity at an angle of 32° to the plane, which minimized the influence of the substrate on the microcavity resonant modes. Figure 3 (left) shows the spectral response of the photocurrent in the near-IR region for different microcavities with diameters 3.9, 3.3, 3.2, and 2.9μm. The obtained photoresponse shows very rich spectra with plenty of high-Q resonant peaks,6 which are about five times larger than the baseline. All these peaks correspond to the whispering gallery modes appearing in a spherical microcavity: see Figure 3 (right).5 We have obtained external quantum efficiency values (the ratio of charge carriers collected by a cell to the incoming photons) of around 1% at mode resonating wavelengths of up to 1500nm, a remarkable value for such a tiny single particle. 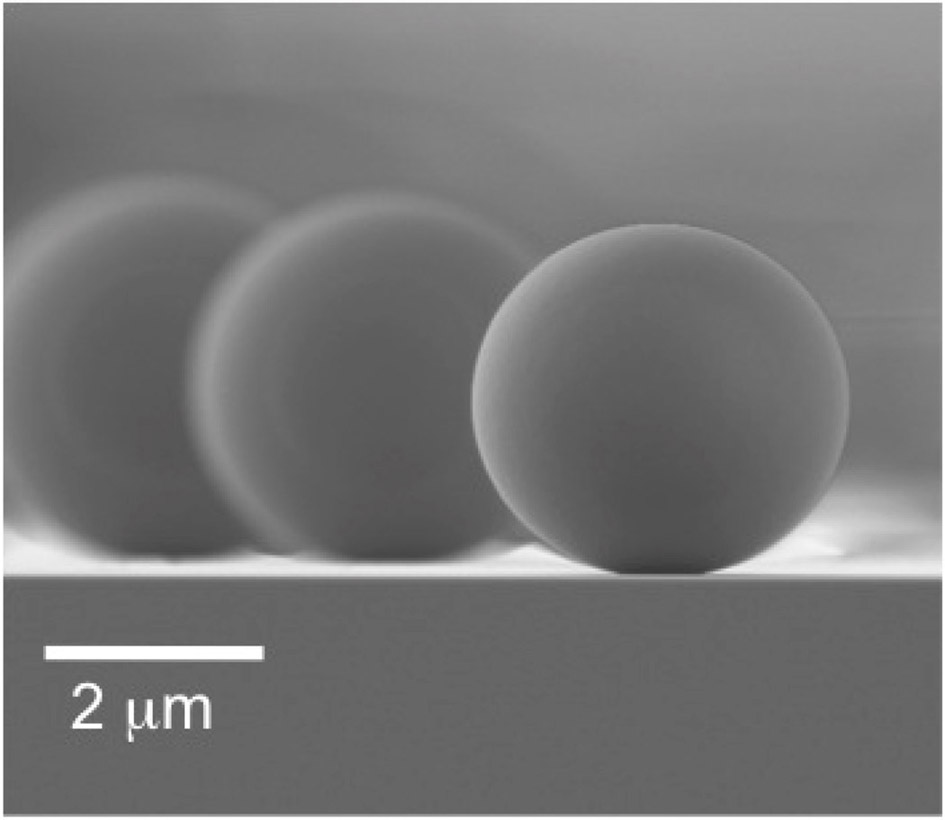 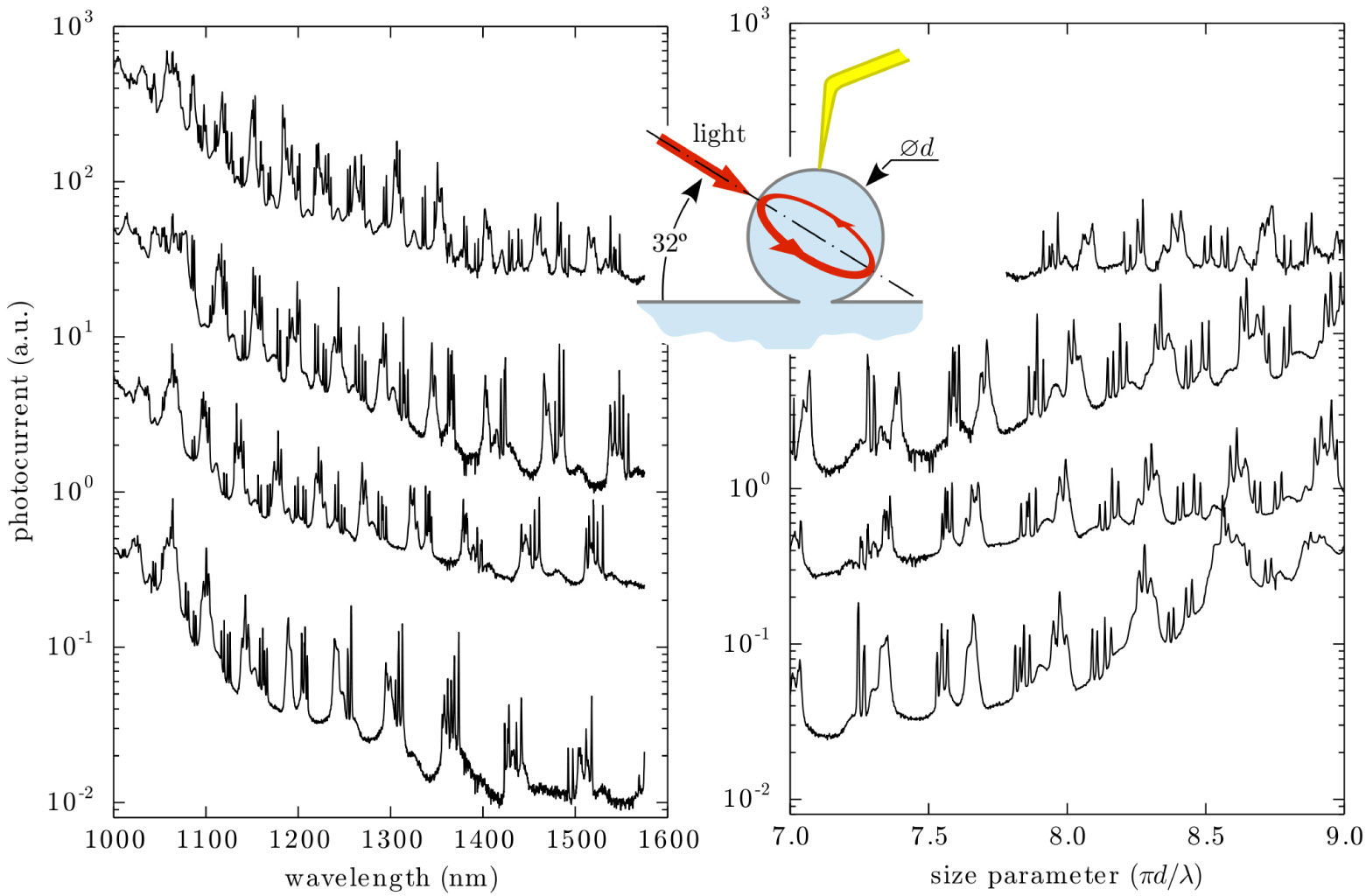 Figure 3. Left: Spectral response (short-circuit photocurrent) of microcavities with diameters of 3.9, 3.3, 3.2, and 2.9μm, from top to bottom, respectively. Right: The same spectra but plotted as a function of the size parameter. In both cases the measured curves are shifted vertically for clarity. (Reprinted with permission.5) a.u.: Arbitrary units. ø d: Diameter.

Our work takes a first step toward PV cells with a reasonable spectral response in the IR region where silicon shows negligible absorption. Due to the high refractive index of silicon, microspheres made of this material may be good candidates for highly scattering systems.7 A connected network of high Q-factor microcavity-based PV cells, combining both resonant absorption and multiple scattering effects, might be the solution for efficient harvesting of IR sunlight. To that end, we are now developing a centimeter-size PV cell to incorporate in such a system.

Ramón Alcubilla has worked in solar cell technology development for 20 years, undertaking pioneering work on surface passivation, laser processing, and multiple wafer splitting. He is currently a professor of electronics.

Roberto Fenollosa is a physicist currently researching the synthesis of silicon microspheres and their optical properties, as well as exploring technological applications from this material.

Francisco Meseguer is a research professor whose interests include colloid-based materials (photonic crystals and silicon colloids) and optical materials and metamaterials for light and sound.

Lei Shi is an associate professor whose research interests include light-matter interactions for technological applications. Examples are energy harvesting, new-generation light sources, and sensors. He has co-authored more than 33 journal papers.

Lluís F. Marsal is a professor with research interests in nanophotonics and sensor devices based on micronanoporous silicon and organic materials.