Solar energy is a vast resource, and next-generation photovoltaic (PV) devices could enable clean, renewable energy on a far greater scale than at present. Current systems operate at <30% power conversion efficiency, but the theoretical limit is >86%. This discrepancy comes from inefficient use of photons that have energies significantly above the semiconductor bandgap (the energy ‘gap’ or difference between the valence and conduction bands) and non-absorption of photons that have energies below it (see Figure 1). To most effectively use the entire solar spectrum, we need to tailor many of the solar cell's properties (the absorption coefficient and bandgap energy, for example), which generally requires the use of different semiconductors. Ideally, we would like to have a single material whose bandgap we could tune without affecting its optoelectronic properties. However, the bandgap is usually considered an intrinsic material property that cannot easily be modified without changing the semiconductor. 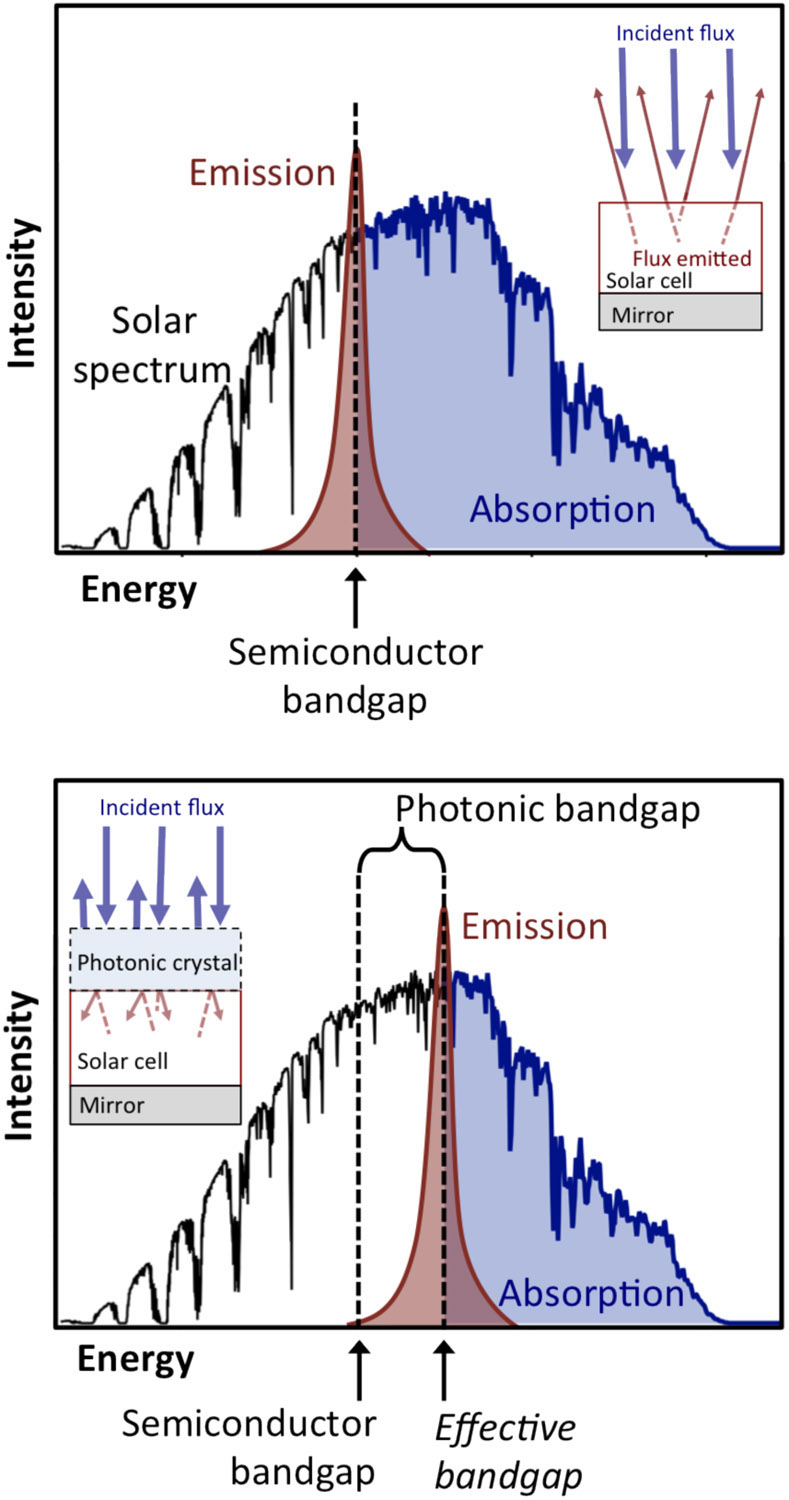 For a particular material, the bandgap energy is generally determined by its chemical composition and crystalline arrangement. For example, if we require a bandgap of 0.7eV, we choose germanium (Ge), and for 1.1eV we select silicon (Si). However, not all energy bandgaps are easy to find in nature, and the optoelectronic properties of these materials can vary greatly. We have developed an approach to modify both the absorption and the effective semiconductor bandgap to enable control of the current and voltage in a single semiconductor device using only photonic structuring.

An ideal semiconductor absorbs all of the light with energy above the bandgap and emits light at the bandgap due to the recombination of excited carriers (see Figure 1, top). Thus, if we are able to modify which energy photons can be absorbed and emitted, we can effectively modify the bandgap. We make these alterations by placing a photonic crystal on top of the solar cell, as in Figure 1 (bottom). The crystal acts like a mirror for photons within a particular bandwidth because they are forbidden to propagate through the material.

From an electronic perspective, the increased carrier concentration enhances the device's open-circuit voltage—that which occurs under illumination when no load is attached—as in Figure 2. Electrons and holes typically recombine, emitting a photon near the bandgap. However, the addition of a photonic crystal traps this light inside the semiconductor so that it cannot escape: see Figure 2(b). The semiconductor can then reabsorb the photon, which increases the carrier density. This process leads to an increase in the quasi-Fermi-level splitting, that is, the difference in the chemical potential for electrons and holes under illumination. As the densities of electrons and holes increase, so does the potential, yielding a higher output voltage on the device: see Figure 2(c).

Figure 2. (a) The open-circuit voltage on a solar cell is determined from the quasi-Fermi level splitting. (b) The addition of a photonic crystal traps photons within the semiconductor leading to reabsorption. This process increases the carrier densities and hence the quasi-Fermi level splitting and open-circuit voltage. (c) The addition of the photonic crystal improves the voltage characteristic of the cell. (Adapted from Munday,1 and Xu and Munday.2) Ec and Ev are the conduction and valence energy band levels, respectively. εF-e and εF- h are the electron and hole quasi-Fermi levels, respectively. ΔV is the output voltage on the solar cell.

Next, we considered how to improve a low-efficiency solar cell by adding a photonic crystal using the method of detailed balance.1,2 We started with a material with a bandgap energy of 0.67eV (Ge, for example) and an internal fluorescence yield of 0.1%. We placed a photonic crystal on top of the device to reflect photons with energies between 0.67 and 0.74eV, and placed a mirror on the back of the device to ensure that no photons exited that way. Adding a photonic crystal results in a 35% increase in the open-circuit voltage, with only a 5% reduction in the current: see Figure 2(c).

Advanced photonic materials also enable development of antireflection coatings and light-trapping structures to increase absorption. There are three processes that need to be considered. First, high-quality antireflection coatings are necessary to ensure that the incident solar flux enters the cell. We have developed a simple, scalable, and inexpensive paper-based coating that can reduce reflections at all angles of illumination—see Figure 3(a)—which leads to an efficiency improvement of 24% for a gallium arsenide solar cell.3 Second, light that enters the device must be efficiently scattered to increase the optical path for thin, weakly absorbing devices. Rather than use textured surfaces, we recently explored the use of quantum dots, which can absorb incident photons and efficiently re-emit them into waveguide modes of the solar cell (modes that guide light based on total internal reflection, as in fiber-optic communications): see Figure 3(b). This scheme increases the efficiency of a polymer solar cell by 28%.4 Third, the overall structure should be designed such that the average local density of optical states within the absorber is higher than it would be for a bulk material. When this condition is met, the thin-film absorption limit increases significantly.5

In summary, it is necessary to control both the maximum current and voltage achievable to improve solar cell efficiencies, and an all-photonics approach is very promising. So far, we have shown that specially designed photonic materials have the potential to modify the effective semiconductor bandgap, reduce reflection, increase scattering, and lead to new absorption limits in thin-film PV devices. We are currently working to realize these structures on a larger scale, which we believe will have a significant impact on the development of future solar and light- emitting devices.

This material is based in part upon work supported by the National Science Foundation under grant CBET-1335857 and the University of Maryland through startup funds and its Nano-Center and FabLab.

Jeremy Munday is an assistant professor whose research endeavors range from photonics, plasmonics, and energy to quantum electrodynamical phenomena (such as the Casimir effect). He is the recipient of the SPIE Early Career Achievement Award and the NASA Early Career Faculty Space Technology Research Award.