Rapid advancements in electronic integrated circuits have brought about a revolution in information processing and management. Many of the significant improvements in computer systems and information technology have been achieved by miniaturizing the elements of electronic integrated circuits. However, the high-density integration of such circuits requires electric signal pathways to be tightly packed on a chip, which leads to a bottleneck in data communication between the circuit elements. In the same way that optical fibers have replaced electrical copper cables for long-distance communications, optical interconnects—with their superior power efficiency and high bandwidth—could replace electrical ones, thereby providing potential solutions to interconnect problems. Optical interconnections must reach an energy consumption of <10fJ/bit and a modulation speed of over a few tens of GHz before they can represent a viable alternative to their electrical counterparts.1

For on-chip or chip-to-chip level interconnections, the fundamental law of diffraction places a limit on the size of optical and optoelectronic devices. Surface plasmons (collective charge oscillations) at the metal-dielectric interface can break the diffraction limit and enable the manipulation of light within nanoscale optoelectronic structures that are similar in size to state-of-the-art electronic devices,2 at the speed of photonic devices.3 Passive nanocircuit elements based on surface plasmon slot waveguides have been demonstrated for routing, splitting, and manipulating optical signals at a length scale much smaller than the free-space wavelength of light.4 A logical next step would be the realization of electrically-driven surface plasmon sources and the seamless integration of such sources with optical nanocircuits based on subwavelength surface plasmonic waveguides.

Various low-threshold nanolasers have been recently demonstrated.5,6 However, in the realization of power-efficient, electrically-driven sources for subwavelength optoelectronic nanocircuits, electrical current injection in such nanolasers presents a daunting problem. The fundamental trade-off between laser cavity size and optical loss must also be overcome. Despite their incoherent emission, nanoscale LEDs (nano-LEDs) may provide an efficient and high-speed alternative light source to nanolasers. The Purcell effect (the ability to modify the rate of spontaneous emission by altering the environment of the light source) enables a strong enhancement of the radiative decay rate of the active medium in the nano-LED, and allows power-efficient and high-speed modulation.7 In particular, metal-clad slot waveguides can strongly modify the local density of optical states and directly couple the emission from the extremely small active medium into a single-mode, low-loss slot waveguide.8, 9 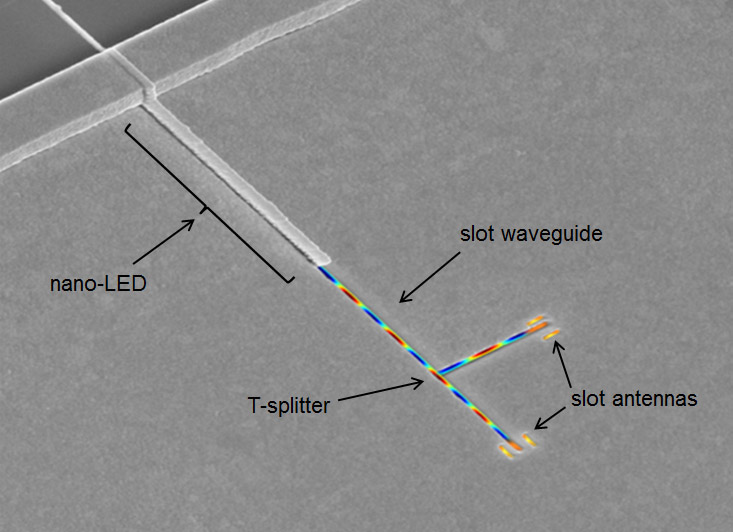 In the development of our electrically-driven surface plasmonic nanocircuits (see Figure 1), we demonstrated electrically-driven slot-waveguide nano-LEDs containing a single indium gallium arsenide/gallium arsenide (InGaAs/GaAs) quantum well (QW): see Figure 2.9 The QW layer emits electroluminescence (EL) at a center wavelength (λ0) of ∼970nm. The 130nm tall and 60nm wide ridge nano-LEDs were formed on a GaAs substrate using plasma dry-etching and focused ion beam milling. We injected electrical currents into the QW layer through the p-contact on the nano-ridge and the n-doped GaAs substrate. A thin aluminum oxide (Al2O3) layer, added by atomic layer deposition, provides electrical insulation between the substrate and the gold layers. Typical nano-LEDs were operated at a peak injection current of 80A/cm2 in 10ns pulses under a 2.25V junction bias, translating to 5.8fJ/bit. The output facet of the nano-LED was end-fire coupled to a 150nm tall and 80nm wide metal-air-metal slot waveguide, formed in the gold slab by focused ion beam etching. For low-loss propagation of gap plasmons, the GaAs substrate underneath the slot waveguide was undercut by a chemical wet-etching process, resulting in the formation of an air pocket underneath the slot waveguide. This air pocket caused a vertically symmetric slot waveguide, which reduced the propagation loss of gap plasmons remarkably by suppressing the optical loss coupled to undesired surface plasmons at the interface between the gold and GaAs substrate. The cross-sectional area of the air-slot of the gap plasmon waveguide was only ∼0.016λ02. 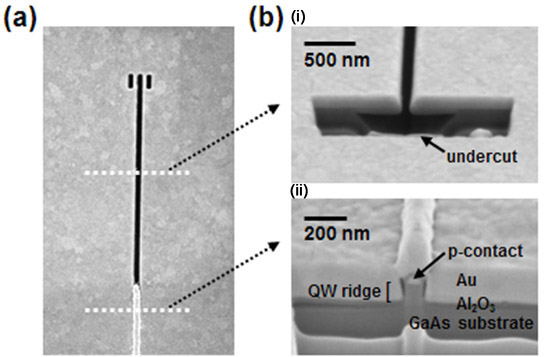 Figure 2. (a) SEM image of a typical electrically-driven gap plasmon nano-LED coupled to a slot waveguide. (b) SEM images of (i) the cross-sections of a slot waveguide and (ii) a quantum well ridge nano-LED. (Figures modified from Reference 9.)

The electrically-driven nano-LED successfully activates several passive nanocircuit elements based on the metal-air-metal slot waveguides. We demonstrated that free-space couplers, T-splitters, bends, and directional couplers enable the manipulation of the gap plasmons from the nano-LED beyond the optical diffraction limit. Figure 3 shows the scanning electron microscope and EL image overlays of the demonstrated T-splitter and directional coupler, interfaced with an electrically-driven nano-LED. TheT-splitter and directional coupler structures were designed using full-field electromagnetic simulations. The T-splitter routes the incident gap plasmons into two output slot waveguides, forward and left, in the same way that a typical beam splitter divides the incident light into two different directions. The ratio of gap plasmon power coupled forward vs. left in our device is about 2:1, which is less than our theoretically calculated value of 1.4:1. This difference may be due to imperfections in the waveguide and junction introduced during fabrication. The directional coupler, with a coupling length of only ∼2μm (∼2λ0), allows a coupled versus transmitted power ratio of >12dB.

Figure 3. SEM and electroluminescence image overlays of (a) T-splitter and (b) directional coupler. The white arrows represent the polarization direction of the linear polarizer in front of the imaging camera. (Figures modified from Reference 9.)

In summary, we demonstrated the integration of electrically-driven nano-LEDs with subwavelength surface plasmonic nanocircuits for the first time. We expect that the demonstration of electrically-driven surface plasmonic nanocircuits will represent a meaningful step towards interfacing high-speed photonic devices with ultra-compact electronic components and developing novel on-chip plasmonic circuit elements for optical communication. In future work, we plan to develop power-efficient and ultra-fast plasmonic nanocircuit elements. In addition to sources, we hope to design modulators and detectors that can satisfy the suggested requirements of 10fJ/bit and a few tens of GHz. We also aim to demonstrate the dense integration of such elements on a chip.

Min-Kyo Seo, an associate professor of physics, received his PhD from KAIST and worked in the laboratory of Mark Brongersma as a postdoctoral fellow.

Kevin C. Y. Huang received his PhD from Stanford and worked in the laboratory of Mark Brongersma. He is currently working as device scientist at Soraa, Inc.

Mark Brongersma, professor of materials science and Keck Faculty Scholar at Stanford University, received the International Raymond and Beverly Sackler Prize in the physical sciences for his work on plasmonics. He is a Fellow of SPIE, the Optical Society of America, and the American Physical Society. He received his PhD from the Foundation for Fundamental Research on Matter Institute in Amsterdam and was a postdoctoral research fellow at the California Institute of Technology.