The US Army and first response units are increasingly focused on the detection and identification of energetic materials, such as homemade and improvised explosive devices. To accurately detect and identify these unknowns (energetic or benign), we must accurately train fielded detection systems for trace and bulk quantities, using well-understood universal testing substrates. Here, we discuss characterizing various phases of ammonium nitrate (AN) using surface-enhanced Raman scattering (SERS) fabricated using drop-on-demand inkjet technologies.

AN, which has practical uses in agriculture and industry, is of interest to the Army as an analyte because it is commonly used in improvised explosive devices. To accurately detect and identify this material, hazard evaluation systems require known AN-containing training materials. This can be challenging, as AN demonstrates different polymorphic phases (generally phase III and phase IV being most common at standard conditions) dependent on the material handling history and even the concentration of materials deposited.

Typically, under standard conditions, phase IV is considered the most stable format. However, when catalyzing solvents are present, AN can shift from phase IV to phase III. Under normal conditions, phase IV is orthorhombic (having three unequal axes intersecting at right angles) and has two formula units per cell. Phase III is also orthorhombic, but has four formula units per cell.1 Phase transition from IV to III results in swelling of the AN due to a 4% increase in unit cell volume,2 and therefore an increase in porosity and explosive potential of fertilizer granules. At room temperatures, AN phase IV to III transition can undergo an intermediary stage very similar to phase II. When phase transitions for AN are observed with Raman, the bands typically associated with symmetric stretch mode of nitrate (NO3−) shift from phase II at 1050cm−1, phase III at 1048cm−1, and phase IV at 1044cm−1.3

We characterize the materials present on the substrate with SERS, which has all the advantages of Raman (little sample preparation, no degradation to the material, applicable to aqueous solutions, and can be used with a host of laser sources) with the added advantage of enhanced signal as compared to spontaneous Raman. This improvement results from both chemical and electromagnetic enhancements between the sample and the metallized substrate surface. For our experiments, we used the commercially available Klarite SERS substrates, which are well characterized, reproducible, and demonstrate little background contamination.

Historically, researchers have fabricated test coupons using the drop-and-dry method. They apply material in solution to a surface and, as the solution evaporates, the remaining material dries, demonstrating a coffee-ring effect with an area of high concentration material around the outer edge of the ring, and low concentration material in the center. The technique has been popular for its ease of application in terms of time, skill, and materials, and the portability of hazard material in solution. However, drop and dry faces challenges in sample reproducibility and uniformity. Therefore, researchers in government, academia, and industry are moving to more reproducible standardized methods, such as inkjet printing, for sample preparation.4–7

To investigate how polymorphic phases of AN may affect system evaluation, we deposited known concentrations of AN uniformly onto Klarite SERS substrates8–10 using a drop-on-demand inkjet printing system. The system features drop ejection drive electronics, pressure control, a drop visualization system, and precision X, Y, and Z motion control. The dispensing device comprises a glass capillary tube with a 60μm-diameter orifice coupled to a piezoelectric element. Voltage pulses applied to the piezo result in pressure fluctuations around the capillary, oscillations from which propagate through the printing fluid in the tube, resulting in ejection of a multidrop. Figure 1(A) shows an example of a standard printing system and Figure 1(B) the print head relative to a dime. 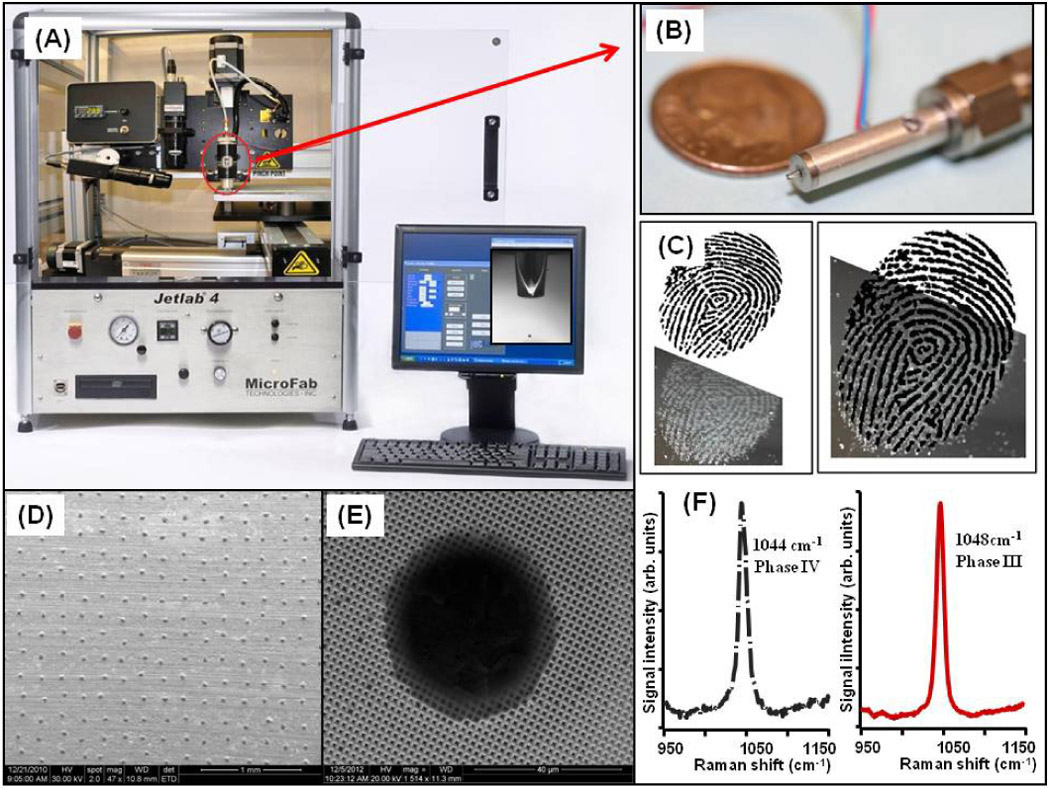 Having deposited the AN, we then measured the resulting SERS signal. Using the printing approach we could vary the location of the material and its concentration—bulk (>100μg/cm2) and trace (<100μg/cm2)—dropped across a substrate. Using the printing system, it is possible to deposit materials in a host of patterns, including those that mimic a fingerprint, as in Figure 1(C). After depositing AN, as in Figure 1(D) and (E), we measured and characterized the signal of the materials on a commercial SERS substrate: see Figure 1(F).

In the bulk AN sample (>100μg/cm2), we measured a main SERS band at 1044cm−1 and a small shoulder at 1048cm−1. This indicated that the sample had possibly developed two regions with distinct phases, mainly phase IV and some phase III. From these results, we postulated that perhaps AN is capable of forming a hard outer protective layer shell (phase IV), while the inside of the droplet may remain in the less energetically favorable state (phase III), thus demonstrating both phase IV stable and phase III less-stable polymorphs within the same droplets. In the trace samples of AN, we measured crystal structures in both phase III and phase IV, seeing phase III most frequently. These observations reinforce that when fabricating standardized test samples for evaluating systems, it is necessary to fully understand the various polymorphs that can be measured.11 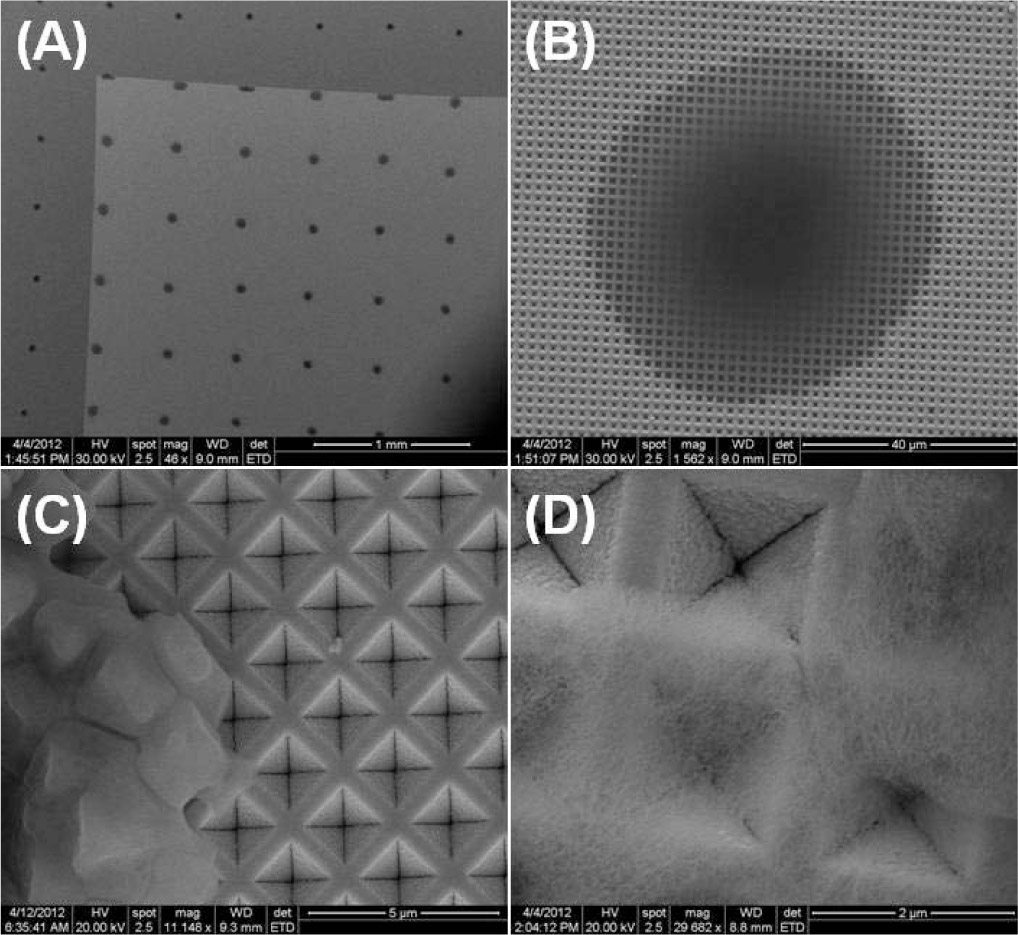 When evaluating optical detection technologies using samples prepared with a drop-on-demand inkjet system, the technology must be trained to detect and identify multiple polymorphic states of materials based on spectral features. We have shown that analyte polymorphism due to solvent deposition and evaporation conditions is an important consideration when preparing standardized samples. In the future, we will investigate the physical conditions related to the formation of specific polymorphic states, as well as the influence of the substrate surface onto which the drops are deposited.

Paul M. Pellegrino is chief of the Optics and Photonics Integration Branch in the Sensors and Electron Devices Directorate. Research interests include optics, physics, and computational physics, optical transduction for chemical and biological sensing, SERS, quantum control, and photoacoustic spectroscopy.