Natural photosynthesis, which generates around 156TW net primary production (NPP),1 powers most of the biosphere and has historically been the major driver of the ‘fast’ carbon cycle (primarily the movement of carbon through Earth's organisms). Today, fossil fuel combustion is transferring carbon from the ‘slow’ cycle—represented here by fossil fuel reserves—to the fast, which has overwhelmed the capacity of photosynthesis to control the cycle.2, 3 As a consequence, carbon dioxide (CO2) levels are rising in the atmosphere and oceans4, 5 and are now higher than much of the contemporary biosphere has ever experienced. Before recent human activity, global photosynthetic energy flow was fully used for biosphere support. Now, even though there is no reserve capacity to provide biofuel for our industries or to grow food for the increasing human population, humans appropriate 25+% of terrestrial NPP. The capacity to meet these demands comes at the further peril of the ecosystems that make up the biosphere, and upon which all life on Earth depends.1

One approach to a sustainable trajectory for biomass production would be to improve the efficiency of NPP using the lessons from physics in high-efficiency solar energy conversion and the techniques of synthetic biology to re-engineer certain photosynthetic organisms for dramatically increased NPP.6 Another approach is to use artificial primary production systems for synthetic photosynthesis.1 Both techniques, and hybrids of them, could eventually play a role in reversing the flow of carbon into the atmosphere,7 freeing natural photosynthesis to continue supporting the biosphere. Importantly, applying technology with biology would restore control of the carbon cycle to a solar-driven process, which is essential for sustainability.

Achieving solar energy conversion efficiencies above those found in natural photosynthesis may be possible in artificial, bioinspired systems, by using complementary dye molecules that absorb light at IR and visible wavelengths to construct artificial Z-schemes (electron transport chains found in photosynthesis) to split water with greater than 10% energy conversion efficiency.8 Here, we describe our progress in the design of components that could make this a reality. These include high-potential artifical reaction center/antenna systems that use bio-inspired electron transfer relays to efficiently couple artificial reaction centers (which enable the photosynthetic energy conversion reprocesses) with water-oxidizing catalysts.

We prepared several models for the donor side of Photosystem II, or PSII (the electron transport chain that connects the primary oxidant, a photogenerated chlorophyll radical cation known as the primary donor, to the catalyst for water oxidation), and studied them using cyclic voltammetry and nuclear magnetic resonance, Fourier transform IR, electron paramagnetic resonance, time-resolved absorption, and fluorescence spectroscopies.9–15 The models mimic the TyrZ-His190 mediator that couples the primary donor to the manganese-containing oxygen-evolving complex in the reaction center of PSII, shown in Figure 1(a). They provide a built-in high-potential mediator thermodynamically capable of coupling the dye-sensitized anode of a photoelectrochemical cell to an appropriate water-oxidation catalyst. 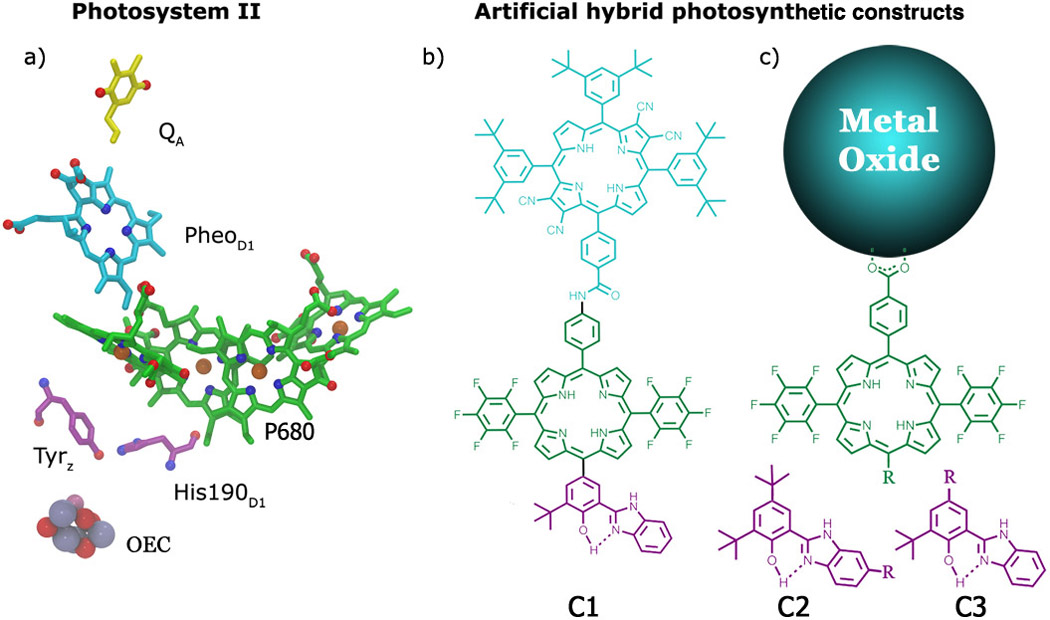 We synthesized a completely organic triad consisting of a high-potential porphyrin (which models the primary donor, the photogenerated chlorophyll radical cation in photosynthesis, as in Figure 1) bearing two pentafluorophenyl groups (PF10), a tetracyanoporphyrin electron acceptor (TCNP), and a benzimidazole-phenol (Bi-PhOH): see Figure 1(b, C1). This triad formed a charge-separated state BiH+–PhO•–PF10–TCNP•− with a quantum yield of ∼0.5 and 4μs lifetime.11 The long-lived, charge-separated state and high potential of the oxidized BiH+–PhO• (1.04V vs. SCE), made this reaction center suitable for incorporation into the photoanode of a photoelectrochemical device for light-driven water splitting.

In addition, we designed two PF10 constructs with a Bi-PhOH moiety attached to PF10 through either the imidazole moiety—see Figure 1 (C2)—or the phenol moiety (C3): see Figure 1(c). In both constructs, the phenolic hydrogen can form a hydrogen bond with the lone pair of electrons of the imidazole nitrogen.9,10,14 Electron paramagnetic resonance studies of these complexes revealed phenoxyl radical formation when we excited the porphyrin. Light-induced electron transfer to the titanium dioxide (TiO2) and subsequent proton-coupled electron transfer (PCET) forms a BiH+–PhO•–PF10–TiO2(e−) state that is thermodynamically capable of water oxidation. System C3 in Figure 1(b) shows solvation and conformational reorganization of the phenoxyl radical (PhO•) formed during PCET, while C2—see Figure 1(b)—with a weaker intramolecular hydrogen bond, did not demonstrate such relaxation. Thus, we tentatively identified the strength of the intramolecular hydrogen bond as an important structural parameter responsible for the bio-mimetic behavior.14 After attaching C3 to tin dioxide (SnO2) nanoparticles, transient absorption revealed that the resulting complex has a lifetime of 93μs for the BiH+–PhO•–PF10–SnO2(e−) state, which is even longer than the lifetime of charge separation in C1: see Figure 1(b).13 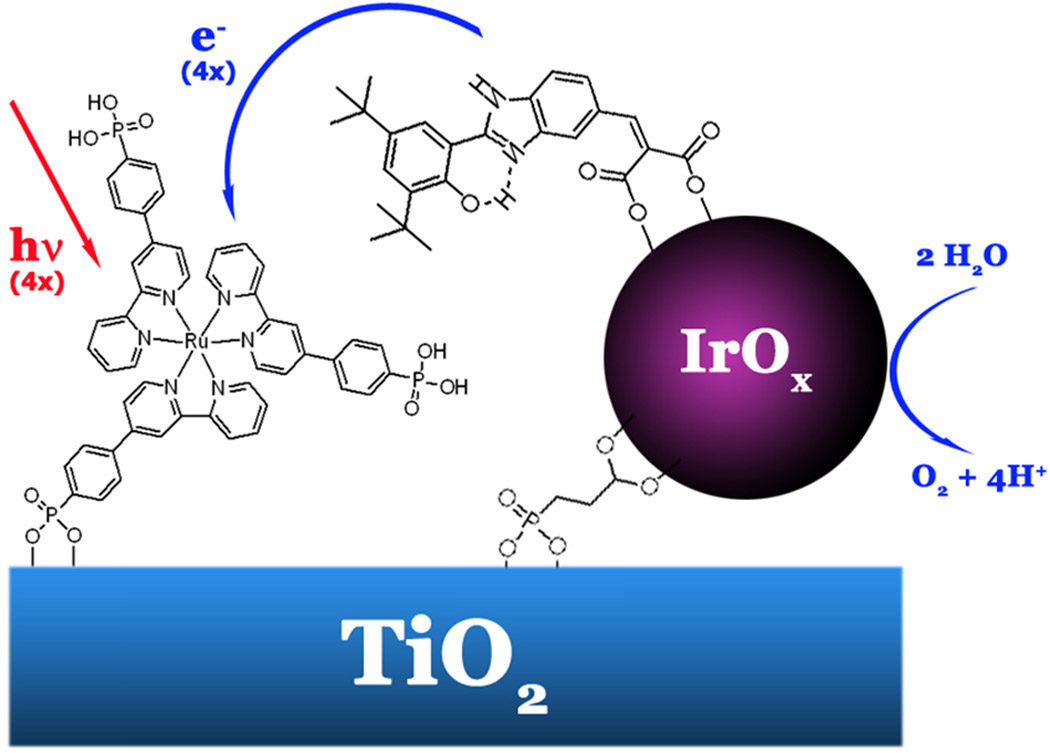 In a different approach, shown in Figure 2, a photoelectrochemical water-splitting cell that caps iridium oxide (IrOx·nH2O) nanoparticles with Bi-PhOH and uses a fluorine-doped tin oxide–TiO2 photoanode bearing co-immobilized Ru(bpy)32+ and Bi-PhOH/IrOx·nH2O, revealed that the Bi-PhOH mediator improves the performance of this system by a factor of approximately three compared to the same system without a mediator.15

In conclusion, we have developed several bioinspired systems that mimic important parts of the PSII system present in the leaves of green plants and in water-oxidizing micro-organisms. Our future work is focused on developing additional components and integrating them into an artificial leaf that uses solar energy with chromophores (the dye molecules that absorb sunlight) and catalysts inspired by natural photosynthesis to split water into oxygen and hydrogen. With this construct we are developing the fundamental science required to design and assemble high-efficiency artificial solar-to-fuel photocells and to re-engineer photosynthesis to better meet human needs for biomass, including food, fuel, and fiber.