An approach to creating microelectronic circuitry that relies on self-assembly of polymer materials can be used as a general technique for surface nanoengineering a host of different material types.
02 May 2014
Michael A. Morris

‘Bottom-up,’ ‘chemical nanopatterning,’ and ‘nanophase separation’ are all common expressions that describe potential techniques for nanoengineering surfaces and substrates without recourse to physical methods such as lithography. The hope of being able to create surface arrangements of precise periodicity and dimension has been around since the original papers on self-assembly (and the quite distinct concept of self-organization). These efforts reported how molecular and physical entities can spontaneously organize themselves into regular arrangements through intermolecular forces.1 Despite the promise of this approach, there are relatively few examples where self-assembly has had a real impact in a commercial sense. One clear success is so-called mesoporous materials, which are manufactured for chromatography and sorption applications.2 Self-assembly has been most closely associated with nanotechnology and the development of nanosized electronic devices. But here, too, apart from some demonstrators, the goal of having arrays of devices formed by self-assembly has yet to be achieved.3

One form of self-assembly, however, is moving toward device manufacture. Block copolymer (BCP) lithography is becoming a viable, scalable, and realizable method for line space (interconnects, devices) and hole (via) patterning at ultrasmall feature sizes.4, 5 Here, using techniques such as grapho- and chemo-epitaxy, the microphase separation of BCPs can achieve extremely ordered arrangements through chemical interactions between the constituent polymer blocks. The polymer patterns can be integrated into current fabrication schemes as a non-UV lithographic on-chip etch mask provided one block in the pattern can be selectively removed. Figure 1 shows brief examples of the progress in this area. 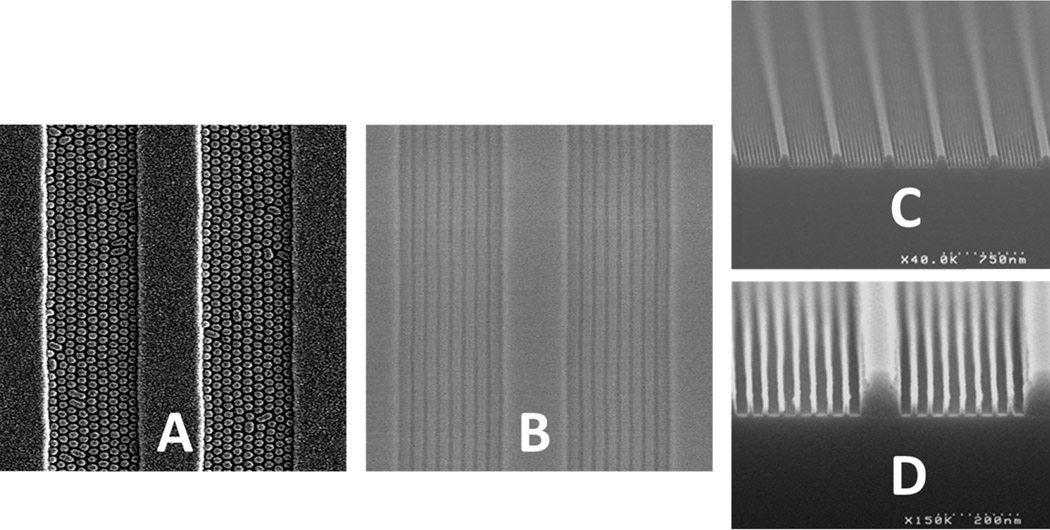 The work in BCP nanolithography has been driven by the challenges—financial and technical—in providing sub-8nm resolution in transistor circuitry and has dominated academic and industrial research in this area.5 However, we have learned a great deal about how these patterns can be achieved, morphology and structural control, as well as choices of polymers, and how a range of materials can be realized.4, 5 Outside microelectronics, where the need for precise positioning and dimensional regularity is somewhat reduced, the application of BCPs in fields that require patterning of sub-50nm feature size has been somewhat neglected despite their low cost. Indeed, the challenges in terms of their commercial integration move from precision-related problems to realizing patterns in different materials (e.g., silicon, III-V semiconductors, metal oxides, and metals); extension to other substrates such as glass, polymer, and metal; developing routes around low capital investment requirements that allow fabrication at scale and low cost; and using these materials to generate patterned functionality.

These materials might generate nanopatterned applications in a number of ways. The schematic in Figure 2 illustrates some of the most important of these, which are discussed in further detail below. In Figure 2(A), one or more polymer blocks consist of active polymers, such as liquid crystals or fluorescent materials. Figure 2(B) depicts the type of pattern transfer used for integrated circuit manufacture where the polymer pattern is copied to a substrate.6 Briefly, one block is selectively removed to yield a topographical etch mask that then protects the substrate during an etch process. Figure 2(C) shows a classic template-type reaction where material is deposited into the topography.7 Removing the remaining polymer yields the final structure. In Figure 2(D), one block is selectively modified (from solution8 or gas phase9) by inclusion of a desired component or precursor. Removing the polymer produces the final structure.

The most obvious application of these structured materials is to use the continuous block morphologies to create membranes consisting of controlled nanoporous structures by single-block removal. The formation and structure of these materials has been detailed elsewhere, and they have application in size-selective filtration, particle growth, and even selective crystal phase development.10 The key to these materials, since relatively thick films are usually required, is often to develop wet etches that can selectively remove one block by designing either blocks that are cross-linkable to prevent chemical attrition or blocks that have groups prone to scission. BCP structures can also be used directly as photonic crystals and in applications based on the properties of these materials.11 Moreover, they can be modified by inclusion of inorganics such as titanium dioxide. In the simplest form of application, they can be used, for example, as solvent sensors where solvent swelling induces periodicity changes that promote variation in color, but temperature, pH, and molecular detection are all possible. A related but somewhat different interesting application of BCP films is as superhydrophobic surfaces.12 The nanosized structure and inherent polymer hydrophobicity combine to produce surfaces that will not wet and have applications in areas such as anti-biofouling surfaces. 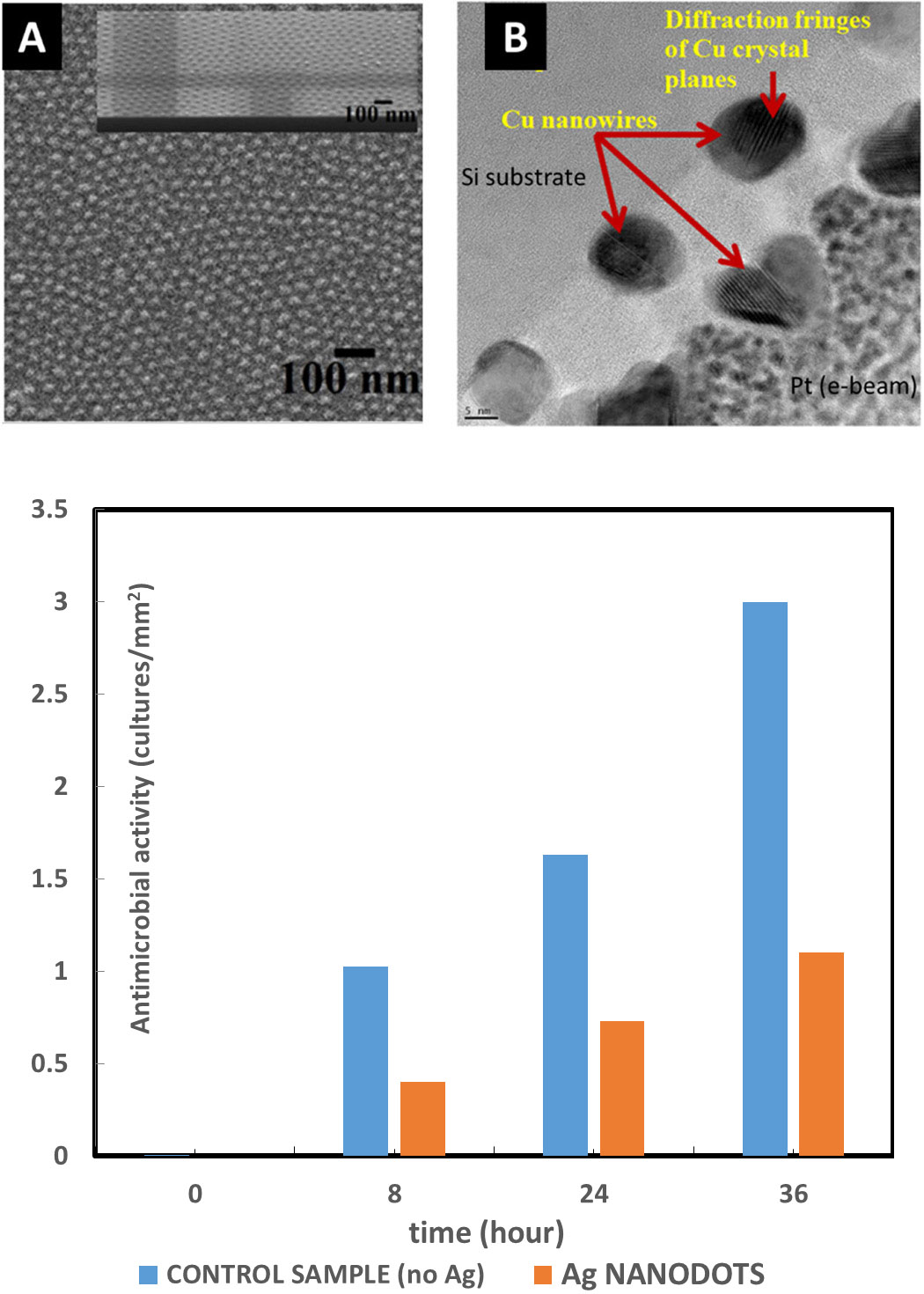 Figure 3. Examples of BCP applications. (A) Iron oxide nanodots on indium tin oxide as sensor. (B) Double layer of copper (Cu) nanowires on silicon (Si) as capacitor. (C) Antimicrobial properties of silver (Ag) nanodots on glass compared to control. Note microbial activity in the presence of the nanodots has been multiplied by 100 in the figure. Pt (e-beam): Electron-beam image with platinum (for x-section fabrication) on sample.

Briefly, a polystyrene-b-poly(ethylene oxide) (PS-b-PEO) hexagonal-forming BCP was deposited onto an ITO surface to create vertical PEO cylinders that were exposed to iron solutions and processed to yield the iron oxide array. The sensor prepared in this way showed good linear sensitivity and performance equivalent to more expensively prepared materials. In another application, copper was deposited into polystyrene-b-poly(methyl methacrylate) templates to create copper-based capacitors with possible application in energy storage: see Figure 3(B).7 As a final example, we have used a similar method to that described above for iron oxide nanodots to create silver metal nanodots for antimicrobial application. These were highly effective against a range of pathogens, including Escherichia coli, Staphylococcus aureus, Bacillus cereus, and Pseudomonas fluorescens, as well as microflora isolated from raw chicken. Figure 3(C) shows that bacterial growth is reduced by more than 200 times using only nanograms of silver.14

In summary, it is clear that BCP nanopatterning can be highly effective in a range of applications other than nanoelectronic device fabrication. The ability to pattern at very small scale, the materials options available, and the low cost make this an important technique for nanosurface engineering. In this research area, it might be argued that the focus of the work should be exploring these materials options and applications rather than providing solutions for the microprocessor industries. As a next step, we will be looking to extend our own work toward developing nanostructured surfaces of complex perovskite-based materials for application in areas such as piezoelectrics, ferroelectrics, and magnetics. We will also be looking at developing materials for semiconductors but in nondevice applications such as dielectrics and metallization, where very significant material challenges exist.

Michael A. Morris is head of Inorganic Chemistry at University College Cork and deputy director of AMBER (Advanced Materials and BioEngineering Research) at Trinity College Dublin. He works closely with Intel Ireland and Components Research in the area of BCPs and has authored over 100 papers in the area of self-assembly.