A platform for practical plasmonics

Materials that are compatible with standard processing techniques can be used for waveguides and modulators without sacrificing performance and functionality.
06 May 2014
Nathaniel Kinsey, Marcello Ferrera, Vladimir Shalaev and Alexandra Boltasseva

One of the best-known trends in technology is Moore's law, which predicts that the number of transistors in a central processing unit (CPU) will double every two years. It has guided the long-term strategy of the semiconductor industry since 1965, but is quickly reaching its limits due to fundamental size constraints on transistors. Currently available CPUs have a gate length of approximately 20nm, or roughly 40 atoms, which cannot be reliably scaled much further without a significant impact on performance. To meet the demand for faster, smaller, and more power-efficient electronics, additional technologies are needed.

One of the leading alternatives is light, which has long been used to achieve high-speed, low-loss communication in fiber optics, and more recently has been used for external data transmission in consumer devices.1 However, photonic systems working at wavelength λ are difficult to integrate with an electrical chip because they cannot be smaller than roughly λ/2 (the ‘diffraction limit’). Given that the standard wavelength for telecommunication devices is 1550nm, integrated photonic systems are on the micron scale and 10–100× larger than today's transistors. If the high-speed operation, broad bandwidth, and low loss properties of light could be brought onto a microprocessor, faster and more efficient computers could be achieved in addition to new integrated optical technologies for medicine, chemistry, biology, and more.

Plasmonics squeezes light into dimensions much smaller than the diffraction limit by coupling it with the collective oscillations of electrons at the interface of a metal and a dielectric.2 While such waves, called surface plasmon polaritons (SPPs), can have extremely small mode sizes (down to a few nanometers), they are plagued by large and unavoidable losses (a trade-off in plasmonic systems). Nevertheless, active plasmonic devices such as modulators, switches, and sensors can still achieve a high level of performance despite these significant losses due to their deeply subwavelength size.3 However, the one component where we cannot compromise on propagation losses is the waveguide, which transmits signals across a device. Losses may be reduced in plasmonic waveguides with structures that use the long-range SPP (LR-SPP), whose mode size and propagation loss approach those of photonic structures (see Figure 1).4–7 Although it is a disadvantage to use a larger mode, these plasmonic devices bring numerous technological advantages, such as reduced coupling losses to active plasmonic devices, an extreme sensitivity to the metal-dielectric surface, and the ability to carry both electrical and optical signals.8

Another fundamental issue is that many plasmonic devices use noble metals, such as gold and silver, which are not compatible with standard CMOS semiconductor fabrication. Our goal is to maintain the performance level of noble metal plasmonics while using alternative CMOS-compatible materials such as titanium nitride (TiN). As well as being CMOS compatible, TiN can be grown epitaxially on sapphire and magnesium oxide, enabling high-quality, ultra-thin films.9 Therefore, we have proposed low-loss plasmonic structures based on TiN for a fully plasmonic multifunctional chip. 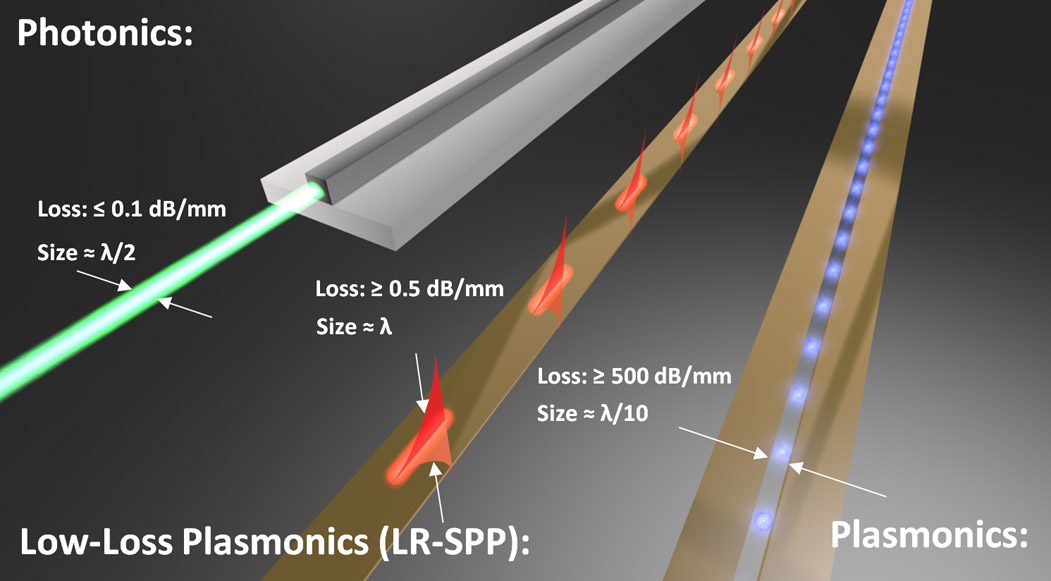 Figure 1. A general illustration of the available schemes for integrated optical communication. Photonics, depicted as a silicon ridge waveguide on a silicon dioxide substrate, is diffraction limited in size and cannot obtain confinement much smaller than the micron scale for the telecommunication wavelength range. Plasmonics, depicted as a metal-insulator-metal slot waveguide carrying gap plasmons, can achieve extremely high modal confinement (< λ/10), but suffers from excessive loss. However, these structures are important for ultra-compact active plasmonic devices (switches, modulators, sensors, and so on). Low-loss plasmonics, depicted as a plasmonic strip waveguide carrying long-range surface plasmon polaritons (LR-SPPs), enables acceptable losses by enlarging the mode size. However, these plasmonic structures bring additional technological advantages such as a reduced coupling loss to active plasmonic devices, an extreme sensitivity to the metal-dielectric surface, the ability to support both electrical and optical signals, and more. We suggest that the additional technological advantages of plasmonic structures offset the lack of modal confinement, and make them more advantageous for use in integrated optical devices.

Using a long, finite-width, thin metal strip (as depicted for low-loss plasmonics in Figure 1), we investigated TiN waveguides on a sapphire substrate (nsapphire=1.746) and achieved less than 0.8dB/mm propagation loss with a mode size (defined as the 1/e2 decay of intensity) of 9μm.8 This compares well to gold waveguides, which have a 0.6dB/mm loss and a mode size of 20μm in a polymer cladding (npolymer=1.535).6 An image of the modal output of a TiN waveguide on sapphire is shown in Figure 2(a), along with a vertical cut-line of the intensity illustrating the standard exponential decay of the SPP away from the metal in Figure 2(b). Our TiN is deposited using reactive magnetron sputtering, and the waveguides were patterned using standard photolithography with a chrome sacrificial layer. The structures were excited and observed using the standard end-fire coupling technique.10

Figure 2. (a) Modal profile of the titanium nitride (TiN) low-loss waveguide geometry on sapphire and covered with a refractive-index-matching oil. The waveguide was 9μm wide and 10nm thick. The thickness of the TiN is enlarged for reference. (b) The intensity as a function of the vertical direction (z) illustrating the exponential decay of the power away from the metal (located at z=0). The experimental data was fitted using two exponential decay functions to allow the mode size to be calculated. It was found to be 9.8μm for this particular geometry. Mode size is defined as the width of the 1/e2 decay of the intensity.8

A second basic optical device is a modulator, used to impart data onto a stream of photons or SPPs. Modulators based on plasmonic structures are able to achieve very high extinction ratios (defined as Poff, state−Pon, state), allowing them to have a very small footprint (see Figure 3). For many devices, modulation is achieved by altering the permittivity of a thin layer to change the absorption.11–13 Transparent conducting oxides (TCOs) are perfect for this role because they have a slightly negative permittivity at the telecommunication wavelength that can be pushed to near zero by applying an external electric field. The near-zero permittivity causes a large amount of the energy to be confined within the TCO, increasing signal loss. For a planar structure in silicon using the TCO gallium-doped zinc oxide, a 46dB/μm extinction ratio (3dB in 65nm) was theoretically predicted with only a 3× change in the TCO carrier concentration.3 In addition, these structures can be integrated with low-loss plasmonic waveguides to reduce the input/output coupling losses in the structure to as little as 1dB/facet in the transmittive state. 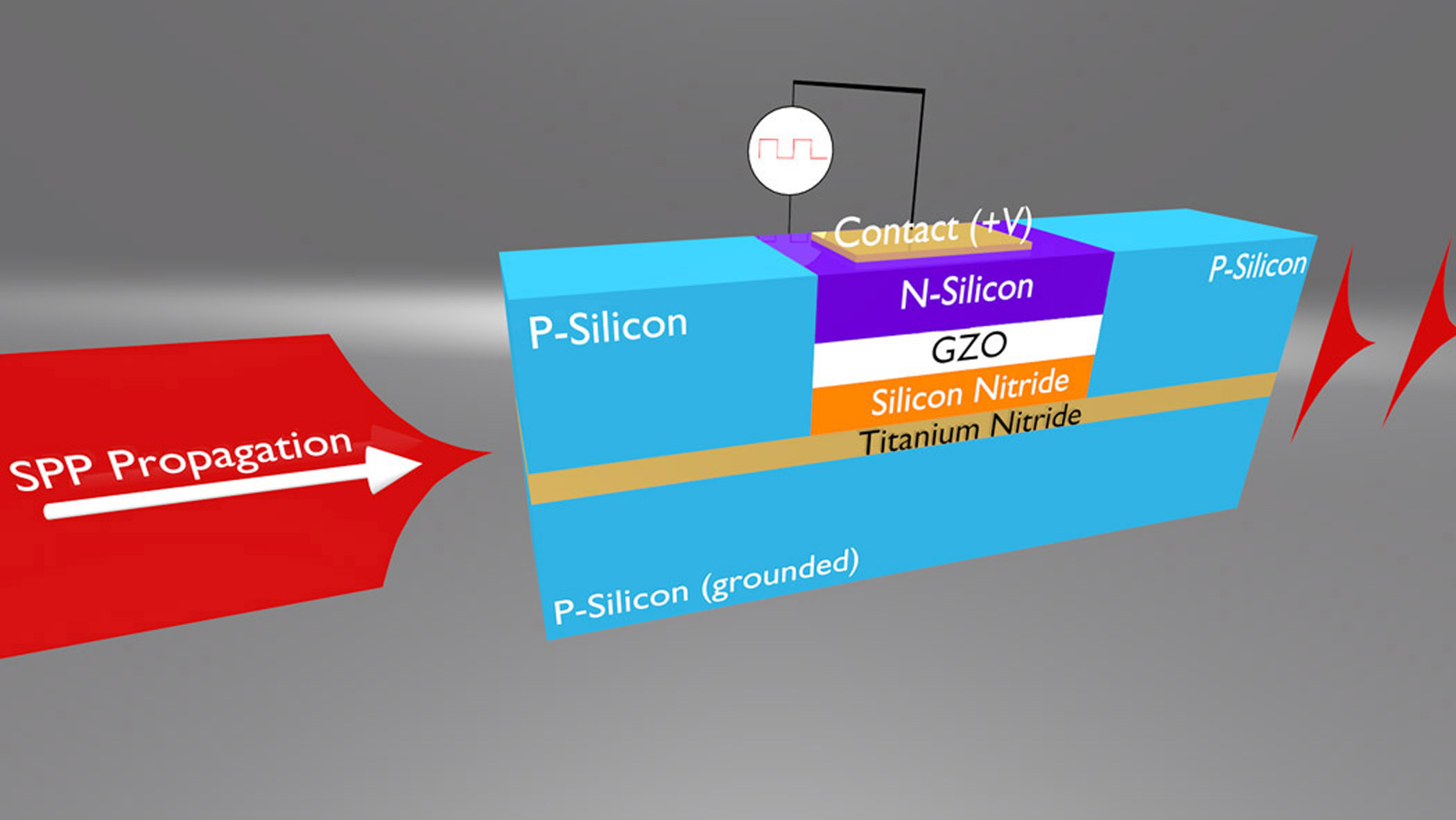 Figure 3. Illustration of a compact plasmonic modulator, integrated with plasmonic strip waveguides. The modulator consists of a TiN strip, which carries the SPPs, a silicon nitride insulating layer, a gallium-doped zinc oxide (GZO) dynamic layer, silicon claddings, and a biasing contact. When a voltage is applied between the silicon substrate and the upper contact, the optical properties of the GZO film are changed, modulating the SPP wave. The TiN, silicon nitride, and GZO layers are all 10nm thick. In the calculations, we assumed other layers to be infinitely thick. (Adapted with permission.3)

Materials enable technology, and the field of plasmonics is no exception. With the fundamentals of theory and basic devices laid out, our current task is to turn these ideas and experiments into practical devices. Across the field of plasmonics, alternative materials are vital to realizing next-generation technologies such as cancer treatments, data storage, renewable energy, and sensing. The wide applicability, high performance, and compatibility with biological and CMOS processes shown by TiN and TCOs form a unique and powerful platform for investigating practical plasmonic devices. Our future work will focus on exploiting the potential of these alternative materials for many applications, in an effort to bring plasmonic devices to the forefront of technology.