Laser material processing has evolved with the introduction of systems that use tightly controlled pulse parameters. Exploiting shorter pulse widths of picoseconds (ps) or femtoseconds (fs) and shorter laser wavelengths improves machining quality and achieves a reduction in the damaged heat-affected-zone (HAZ) of a substrate. Higher pulse repetition frequency (PRF) and higher pulse energies have also increased throughput. However, most lasers use uniform PRF, which enables maximum thermal diffusion into the substrate, leading to an increased HAZ. Therefore, there is room to improve laser material processing techniques.

Bursting is a type of laser operation where the emission of pulses is not in a uniform and steady stream but rather in tight clusters of pulses. The technique has particular benefits for micromachining, where the laser is used to etch or manipulate the surface of a material.1–4 Here, we expand on the bursting approach and show that it significantly improves the rate of material removal and reduces the HAZ.3

Our experimental investigation1 used a Daytona 355-HE pulsed UV fiber laser by Coherent, Inc. Daytona is a seeded fiber laser that generates 355nm pulses by harmonic conversion. We can vary the pulse width from 1 to 20ns, and the number of pulses per burst (n) from 1 to 10, and at pulse spacing (Δ) from 12ns to half the nominal burst repetition interval (1/BRF). Additionally, we can apply pulse leveling, which produces bursts of flat-top profiles (see Figure 1). A scanner and f=100mm f-theta lens delivered the laser beam to the sample. The calculated spot diameter at the sample surface was 14μm.

We compared the depths of several scribes of monocrystalline silicon and demonstrated that the incremental delivery of energy over the duration of the burst produced a deeper scribe and a significantly faster ablation rate (see Figure 2).1,5,6 Depth implied that the deposited energy was efficiently used for material removal, and there was a reduction in left-over energy in the substrate, which in turn reduced HAZ and disrupted the effects of thermal damage.

Figure 2. Comparison of the depths of scribed microcrystalline silicon (m-Si) showing that bursting produced significantly deeper scribes, (a) as the number of pulses per burst was increased while maintaining burst energy, and (b) as power was increased. Other laser parameters were kept constant: BRF =200kHz, pulse width = 1ns, Δ=48ns, wavelength =355nm, spot overlap =82%, 75%, and 66%. uJ: Microjoules. um: Micrometers.

We also compared material removal using lasers with and without pulse bursts (see Figure 3). Here, we varied pulse spacing without changing burst energy, peak power, or the number of pulses. All other parameters were constant while using a flat-top burst profile. Note that the energy and peak power of a 5ns pulse was equivalent to that of a burst of five 1ns pulses of zero pulse spacing. Since peak power was kept constant for all five scribes, this test isolated the effect of variation of peak power from the effect of changing pulse spacing within a burst.5, 6 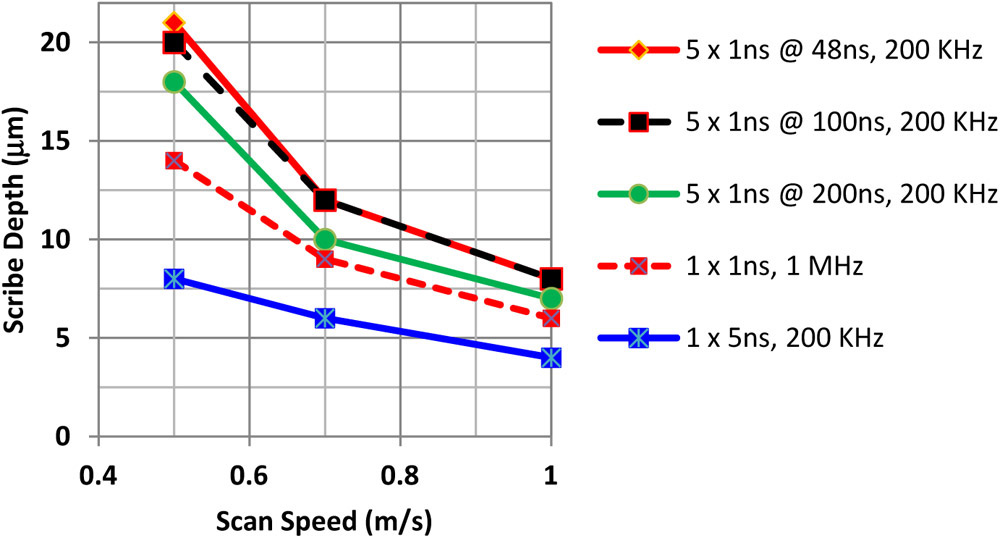 Figure 3. A comparison of scribe depths in m-Si for cases without pulse bursts (1×5ns and 1×1ns), to those with bursts of various pulse spacing. All cases used the same burst energy, pulse peak power, and 10W of power.

We obtained the deepest scribes using bursting, while the shallowest corresponded to the single 5ns pulse (lowest trace). This 5ns-wide pulse appeared to be least efficient at material removal rate, but subdividing this pulse into 1ns pulses and arranging these in a rapid burst produced significantly deeper scribes. Breaking down the pulse into several shorter pulses disrupted the blocking effects of plasma shielding and enhanced the absorption of the laser's energy.

To summarize, we found that operating the laser in a uniform (non-bursting) PRF was less efficient for material processing. Instead, pulse bursting increased the rate of material removal significantly as we increased pulse count per burst and reduced pulse spacing. Bursting minimized thermal diffusion into the substrate, which in turn reduced HAZ and disrupted the effects of plasma shielding, allowing the ablation plume to dissipate, and improving energy delivery to the surface. Consequently, bursting improved throughput as material removal rates increased due to properly distributed pulse energy in time as compared to the thermal diffusion rate into the substrate.

The advantages outlined here are not limited to silicon, and our future work will focus on customizing the pattern of the pulse burst to various materials and applications. For example, bursting can achieve clean and efficient scribes of indium tin oxide thin film at a fraction of the delivered pulse energy and without the need for an overpass.1

Sami Hendow is President of ALP, a consulting organization focused on optical system design and laser micromachining. Sami has a PhD in optical sciences, and over the last 25 years has developed several products and technologies and published more than 60 articles and patents related to lasers and photonics.