Progress toward a quantum communication satellite

The secure distribution of cryptographic keys has always been a crucial element for the task of protecting and sharing important secrets. Today's algorithmic methods of key distribution, used ubiquitously on the Internet and other networks, rely on assumptions about the computing power of a possible hacker, which leads to fundamental problems for long-term security. Quantum key distribution (QKD), in contrast, establishes highly secure keys between distant parties by using single photons to transmit each bit of the key.1 Because single photons behave according to the laws of quantum mechanics, they cannot be tapped, copied, or directly measured without disturbance. Such systems provide users with the peace of mind of knowing that any attack, manipulation, or copying of the photons can be immediately detected and overcome. QKD thus solves the long-standing problem of securely transporting cryptographic keys between distant locations. Even if the keys were transmitted across hostile territory, their integrity could be unambiguously verified upon receipt.

Ground-based QKD systems are commercially available today. However, these current systems can only cover distances of up to 200km due to photon absorption in fiber-optic cables. In principle, quantum repeaters would allow the concatenation of several shorter quantum links and thereby overcome the limitations of direct long-distance quantum transmissions, but at present deployment of these devices outside laboratory settings is prevented by technical hurdles, which are the focus of much research.2 Satellite-based quantum communication systems offer an approach for surpassing distance limitations even with today's technology, and make a truly global network for quantum communication feasible in the near term (see Figure 1). 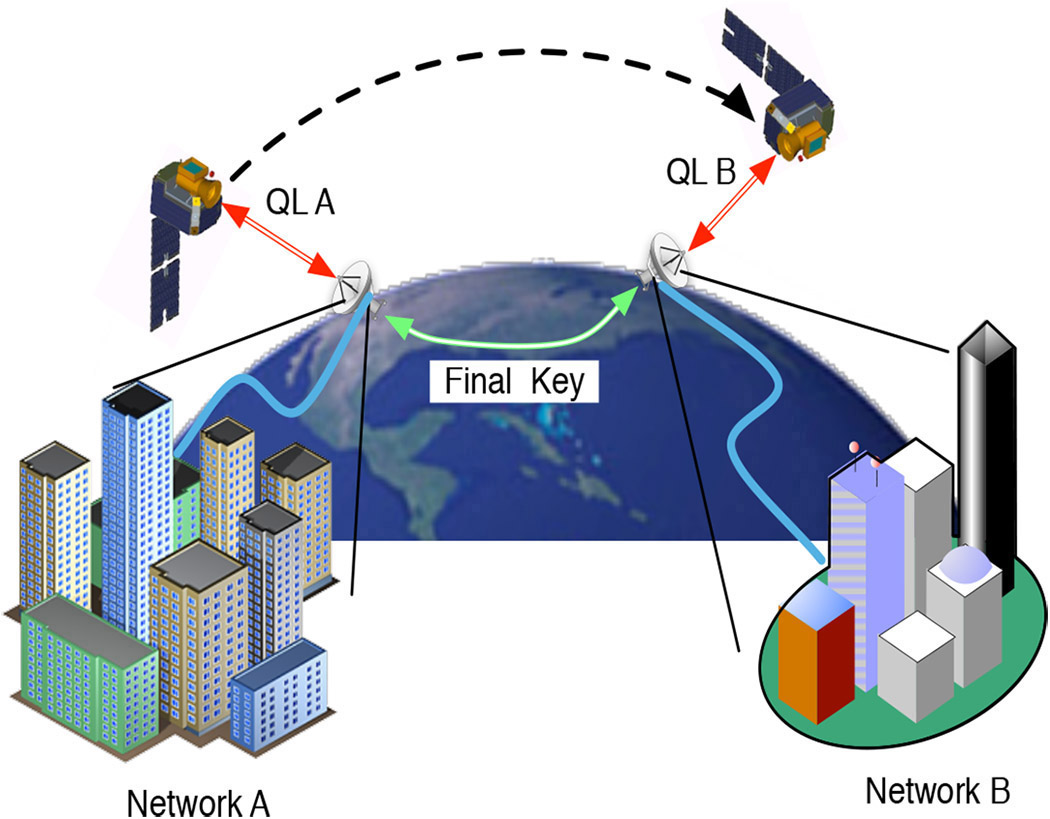 Figure 1. A satellite can be used as a trusted node to bridge the large distance between two city-wide networks. To distribute a cryptographic key securely, Network A communicates with the satellite over a quantum link (QLA) and later Network B uses a similar link (QLB).

Over the past three years, our group has been working with industry partners to advance a proposed microsatellite mission called QEYSSat (Quantum EncrYption and Science Satellite) through a series of conceptual and technical studies funded primarily by the Canadian Space Agency (CSA).3 QEYSSat's mission objectives are to demonstrate the generation of encryption keys through the creation of quantum links between ground and space, and also to conduct fundamental science tests of long-distance quantum entanglement (the intriguing phenomenon in which the joint quantum state of, for example, two particles cannot be factored into a product of individual particle states).

The quantum signals for QEYSSat will be generated in photon sources located on the ground. An optical transmitter on the ground will point the beam of photons toward the satellite. (QKD can be carried out via such quantum uplinks, along with ordinary classical communication with the satellite.) An important aspect of this mission concept is to keep the complex source technologies on the ground and ensure that the satellite is simple and cost-effective. This approach also allows the quantum link to be implemented using various different types of quantum sources, including entangled photons and weak coherent pulses. Placing the quantum receiver in space, however, poses some technical challenges of its own. In particular, the expected link losses will be higher for the uplink than they would be for a downlink because atmospheric turbulence perturbs the photons at the start of their journey up to the satellite. In addition, the dark counts of single-photon detectors will rise due to radiation exposure in orbit.

The current platform for the QEYSSat mission proposal is based on a microsatellite, to be located in a low Earth orbit at an altitude of about 600km. The payload would have an optical receiver with 40cm aperture as the main optics (see Figure 2). To show the viability of this mission concept, we have conducted several theoretical and experimental studies, including a comprehensive link performance analysis,3 as well as QKD experiments over high transmission losses4 and over a rapidly fluctuating channel.5

Figure 2. Left: Artist's rendering of a quantum communications link between a ground station and the satellite. Right: Schematic drawing of the proposed Quantum EncrYption and Science Satellite (QEYSSat) spacecraft.

Typical QKD experiments operate with 20–30dB of losses, but for a satellite link the losses are expected to be about 40dB or more. We studied how to implement a QKD protocol in the case of such high transmission losses and we operated a system successfully with losses up to nearly 60dB.4 Fluctuations caused by turbulence will be particularly important when sending quantum signals to a satellite. We showed that quantum communication using single photons is still possible even when the channel transmission is strongly fluctuating, down to complete drop outs of the signal. We also showed that in the extreme case of very high transmission losses, we can improve the signal-to-noise ratio and keep performing QKD by applying a threshold filter to the data in post-processing.5

In summary, we are establishing the viability of the concept as well as the design parameters for the proposed QEYSSat mission. We are currently working on the main technical challenge, which is to improve existing quantum devices to make them suitable for the space environment. The QEYSSat payload will include the capability to analyze and detect single optical photons with high efficiency and accuracy. Each arriving photon will be analyzed in a polarization analyzer and detected in single-photon detectors. Onboard data acquisition will register all detection events and record their time-stamps to subnanosecond precision, for processing later on the ground. We are leading a project with industry partners and the CSA to build and test a compact prototype for the main elements of the quantum key distribution receiver that would be compatible with a microsatellite-class platform.

Thomas Jennewein has been a faculty member at the Institute for Quantum Computing, University of Waterloo, since 2009. His research interests are experimental implementations of quantum communication, QKD, and photonic entanglement. In particular, he works toward global-scale quantum communications using satellites.