600 million citizens of India are now enrolled with biometric ID

The most ambitious biometric deployment in history, to enroll the iris patterns and other identifying data of all 1.2 billion Indian citizens in three years, has now passed its halfway mark.
07 May 2014
John Daugman

Biometric pattern recognition is a very active field of scientific and engineering research, whose goal is automatic, reliable, rapid determination of personal identity by analysis, encoding, and matching of discriminative personal characteristics. These technologies thus draw upon the sciences of biology, signal processing, computer vision, sensors, information theory, statistics, pattern recognition, and decision theory. Governments around the world have begun to deploy biometric technologies for purposes ranging from airport security and military applications, to national ID and entitlements distribution. The flagship of all these is the Unique IDentification Authority of India (UIDAI), which in 2010 launched its Aadhaar program to enroll the biometric identifying data such as iris patterns of all 1.2 billion citizens, to enable fairer access to Government benefits and services. Prime Minister Manmohan Singh announced that its purpose is: “To give the poor an identity.”

India currently spends about $60 billion annually on social programs, subsidies, and welfare benefits, but more than half of this never actually reaches the poor. According to Srikanth Nadhamuni, who is the director of UIDAI Mission Convergence: “It is siphoned away by corrupt officials and middlemen.” One goal of UIDAI is to provide entitlements directly to each person. But only one in 12 persons has a bank card. Only 4.2% have passports. Hundreds of millions have no official ID, and many have multiple IDs. Some States within India have many more names on their food ration lists than the number of persons who live there. Many subsidized commodities (such as kerosene) flood the black market because bogus benefits cards abound. Widespread fraud prevents fair distribution of entitlements.1 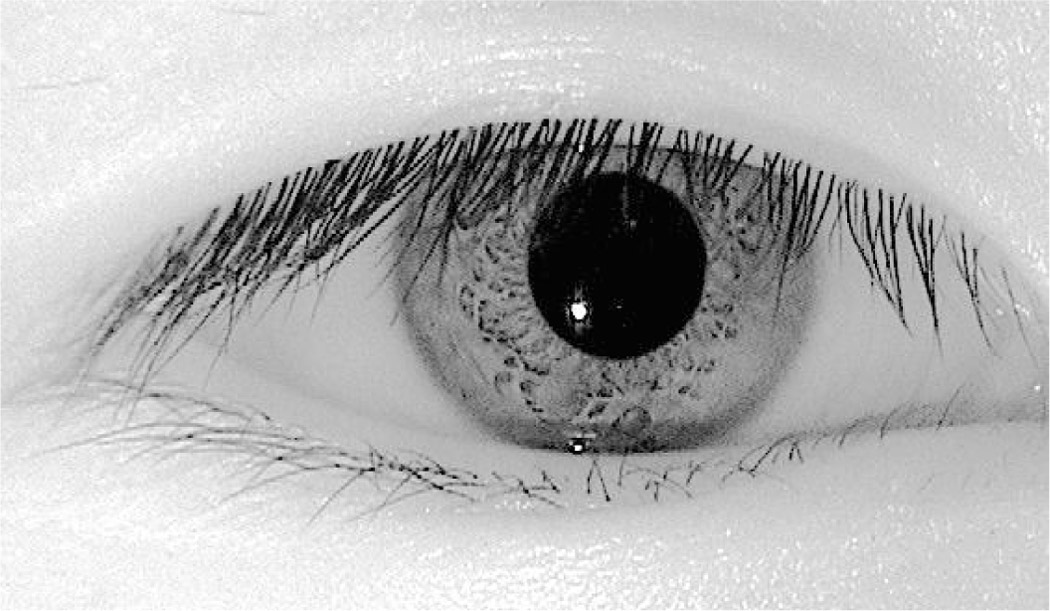 Figure 1. Complex texture of a darkly pigmented iris when it is imaged in the near-IR band (NIR, 700–900nm).

The solution for reliable identification of the entire population is to acquire biometric data (iris patterns, see Figure 1, and fingerprints) of every person, stored centrally, linked to a unique 12-digit ‘Aadhaar’ number issued to them that they use to assert their identity in seeking any Government service or benefit. The Aadhaar number ‘travels with the person’ so it can be invoked anywhere, by biometric authentication against the central database. The Aadhaar (meaning ‘platform’ in many of India's 22 languages) is a pointer to many services. For example, it can be used to create a bank account for a person without one. In rural areas that have no banks, a million ‘micro-ATMs’ will be created by having shopkeepers and grocers dispense cash to local villagers using authenticated Aadhaar numbers, with online interbank counter-transfers to the shopkeeper's account. Enrollment in the system is voluntary, but it has been enthusiastically embraced because it is understood ‘to be a door-opener.’ There are long lines to enroll, including homeless and marginalized people. Logistics involve 36,000 roaming portable enrollment stations, deploying 11 models of certified biometric sensors (one of which is shown in Figure 2), run by 87,000 test-certified enrollment operators, managed through 83 agencies. 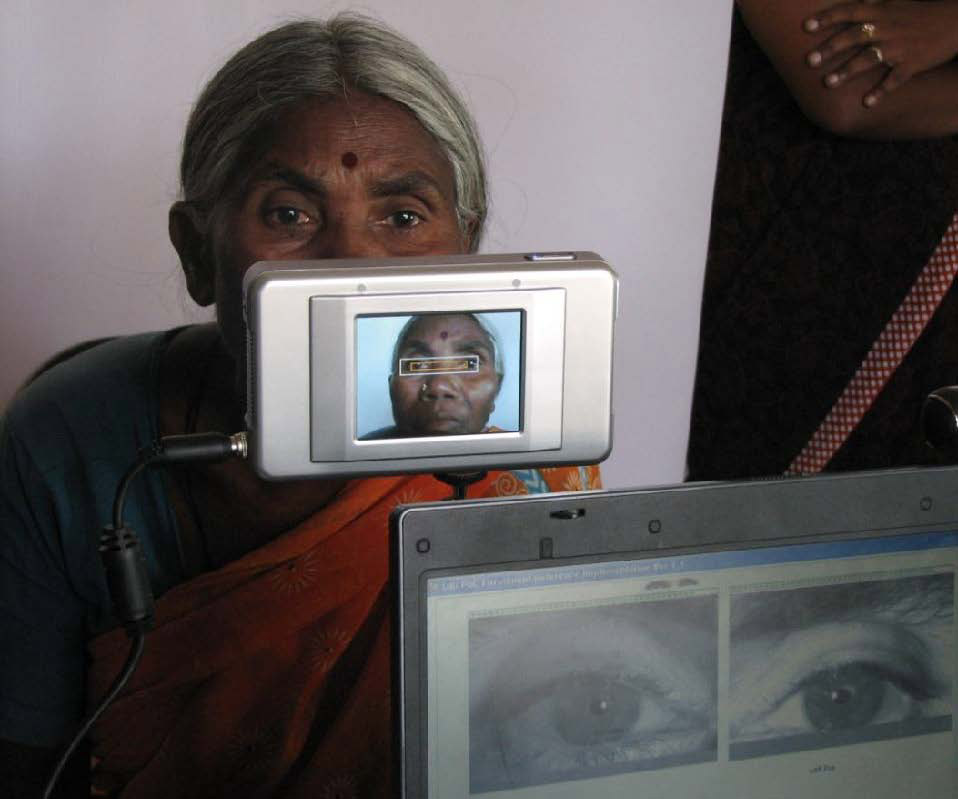 Figure 2. At 36,000 enrollment stations across India, the Unique IDentification Authority of India (UIDAI) enrolls the iris patterns and fingerprint data of an average of 1 million persons each day. This high-volume daily intake is required to enroll 1.2 billion citizens within three years. A dashboard showing enrollment progress is updated weekly.2

The most breathtaking aspect of this program is that each new person enrolled is first compared biometrically with all the persons already enrolled to detect any duplicate identities, since those would allow fraudulent access to multiple benefits. This ‘de-duplication’ check requires a work flow that scales, obviously, as the square of the database growth. Thus today, with 600 million persons enrolled and another million enrolling each day, the total number of cross-comparisons done is 600 trillion (600 million-million)! How can this juggernaut (a Hindi word, appropriately) approaching 1015 daily comparisons possibly be sustained without drowning in false matches or hopelessly slow execution speed?

The answers are found in the entropy3 and in the parallel bit logic4, 5 of IrisCode matching. Iris patterns contain rich and complex textures with enough entropy (random variation from one eye to another) to serve as unique identifiers. In the visible band of wavelengths, this random texture is often barely visible in a ‘dark-eyed’ person, as are most Indians. But in the near-IR band (NIR, 700–900nm) as used by all iris cameras, a very rich picture emerges resembling almost the lunar surface (see Figure 1). Algorithms that the author developed 21 years ago, which are used in all current publicly deployed iris recognition systems, encode the texture into a bit stream by a process of phase demodulation using 2D Gabor wavelets.3 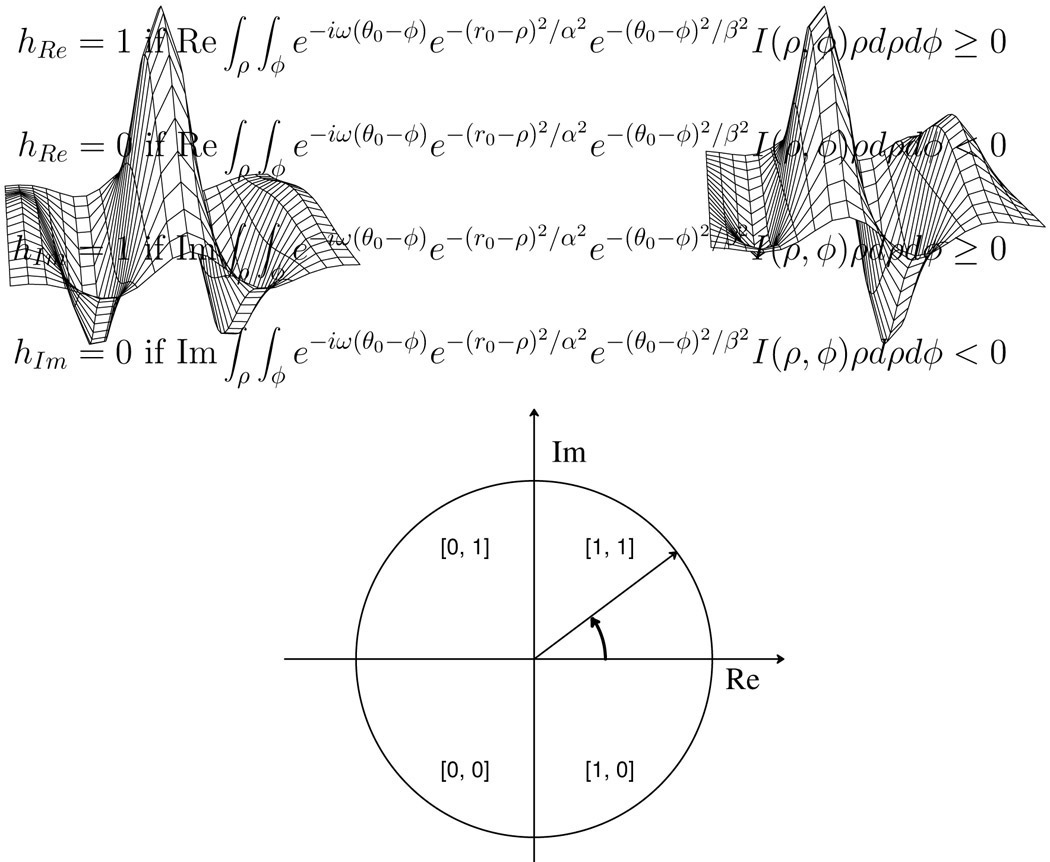 Figure 3. The bits in an IrisCode are set by phase sequencing the mapped iris texture.3,4 Complex-valued 2D Gabor wavelets perform phase demodulation to set a pair of bits naming a quadrant in the complex plane, for each local patch of iris texture.

The way these algorithms work has been described in earlier papers3–5 but is summarized in Figure 3. Projection integrals of an image onto the wavelets compute phase descriptors for each patch of iris texture, quantized to the nearest quadrant in the complex plane, thereby extracting two bits. Accumulated across the entire iris and at multiple wavelet scales, these phase bits build 1024-byte ‘IrisCodes’ (two are illustrated in Figure 4). Their high entropy is immediately evident. Just as in cryptographic security systems, high entropy is the key to avoiding collisions (false matches). The enormous speed6 of matching, which is several million IrisCodes per second per single-core CPU in commodity hardware, arises from simple bit-parallel logic to compute Hamming distances (the total fraction of bits that disagree) from bit-wise exclusive-ORs between IrisCodes.

Today at the halfway mark with 600 million persons enrolled, the Aadhaar project is exactly on track. One telling statistic that was not foreseen is that in Delhi alone, 56,000 homeless people have applied for Aadhaar to open bank accounts so that their money is safe from robbers while they sleep on the pavements. Of course, some persons (about 0.23%) cannot provide biometric data because of injuries or disease that may have lost them their eyes or fingers. Operational tests have shown that the rate of failing to make a match is 0.044% (or about one in 2300), and for all such persons, alternative non-biometric means of identification are provided. 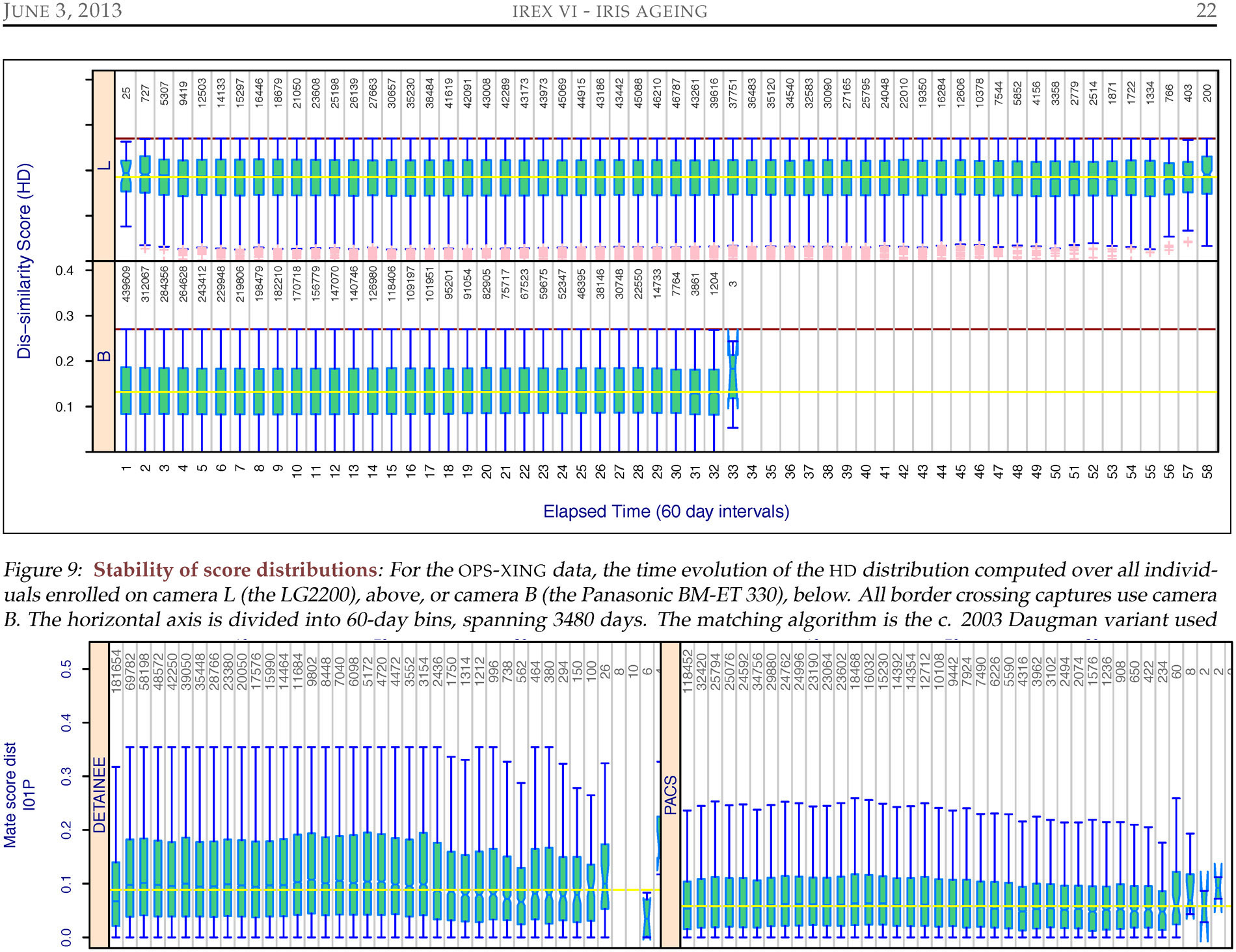 Figure 5. Stability of IrisCode matching scores over six-year and nine-year periods, in multi-million image evaluations by the National Institute of Standards and Technology.7 Time-series data of actual Hamming distances (percent of bits that disagree), in operational deployments, are plotted.

Research related to iris recognition and its optimal deployment continues today on many fronts. One hot topic concerns the long-term stability of iris templates.8 In recent years, many sensationalist stories have appeared claiming that “iris patterns change over time,” or at least that “accuracy of iris recognition systems degrades over time.” As noted by the National Institute of Standards and Technology (NIST), “Inevitably this meme has propagated internationally to government and other procurement officials tasked with determining whether iris is a viable biometric.” Those popular news reports prompted NIST to undertake a major new study, released in 2013.7 It included US Department of Defense field operational data consisting of 3.5 million iris images collected over six years from 622,464 subjects, and operational border-crossing data from airports involving 1,042,948 transactions logged over a nine-year period, from 2003 to 2012. NIST also re-analyzed earlier 2004–2008 and 2008–2010 image collections. NIST concluded: “Using two large operational datasets, we find no evidence of a widespread iris ageing effect...However, given the large population sizes, we identify a small percentage of individuals whose recognition scores do degrade consistent with disease or an ageing effect.” 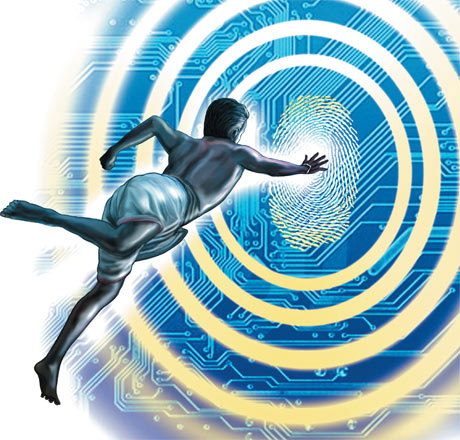 The vast UIDAI deployment (whose logo is seen in Figure 6) is stimulating more research by the author and others into topics such as countermeasures against subterfuge, handling off-axis gaze, and image acquisition under less constrained conditions.

John Daugman is professor of Computer Vision and Pattern Recognition at Cambridge University. He is the inventor of automatic iris recognition, and he serves as chief scientist for this technology with the Morpho division of the French defense, aerospace, and security group SAFRAN. His awards include the Order of the British Empire (OBE), and induction into the US National Inventors Hall of Fame.