Systems capable of real-time monitoring have several potential health-related applications, particularly for individuals who desire to age in place as well as those living with acute health conditions. An electrical response exists near the scalp from ionic transmission within neurons (brain cells) and may be measured noninvasively by electroencephalography (EEG). Use of EEG for detecting convulsive1, 2 and nonconvulsive3 epilepsy is well developed and documented in the literature with sensitivities between 80 and 90%. Real-time EEG monitoring during sleep may provide valuable information on alterations in sleep patterns, which has been shown to be effective in detecting and predicting anxiety, depression, and early dementia in the elderly.4, 5 Anxiety and depression in turn have been directly correlated to numerous deleterious chronic health conditions such as cardiovascular disease, stroke, sleep disorders, and diabetes. Having a mechanism to detect and predict onset of anxiety and depression would be a powerful out-of-clinic tool.

A potential application for at-home EEG monitoring is assessment of head injuries and post-concussion syndrome. As these conditions affect the alertness of individuals, there is evidence that head injuries affect the alpha wave patterns of the EEG in the range of 8–12Hz.6 While many previous studies have shown the potential for EEG to detect and assess cognitive impairments, most have been conducted under controlled research conditions in the clinic. Extension of these findings to the home requires further investigation as environmental conditions are likely to affect the EEG data collected.

Wang and colleagues7 showed the efficacy of an untethered, wireless brain-machine interface system using 20 dry electrodes embedded into a head cap. This wireless ‘functional’ EEG (f-EEG) head cap system has a built-in bandwidth filter for eliminating environmental noise (for example, 60Hz household utility lines) and also for pattern noise. This pattern noise filter also naturally represents a neuron threshold logic that can be used to assess cognitive function and for diagnosis. Similar to other functional neuroimaging modalities such as f-MRI, f-EEG involves extracting localized functional information about the brain, in this case by performing complex computations of correlations between the time-varying signals of electrode pairs.

We previously proposed a noninvasive, wireless, real-time, smartphone-based f-EEG system for at-home measures of cognitive function with the same accuracy and resolution as in-clinic measures of brain function. Here, we extend that work to detect so-called brain order-disorder transitions.8, 9 Examples of these transitions include blood clots subsequent to sports injuries, senior cognitive decline, as well as childhood onset schizophrenia and adult post-traumatic stress disorder. The new design consists of a nontethered, wearable cap that covers the entire scalp and contains a high density of micro (gecko-feet-like) dry electrodes: see Figure 1(a) and (c). 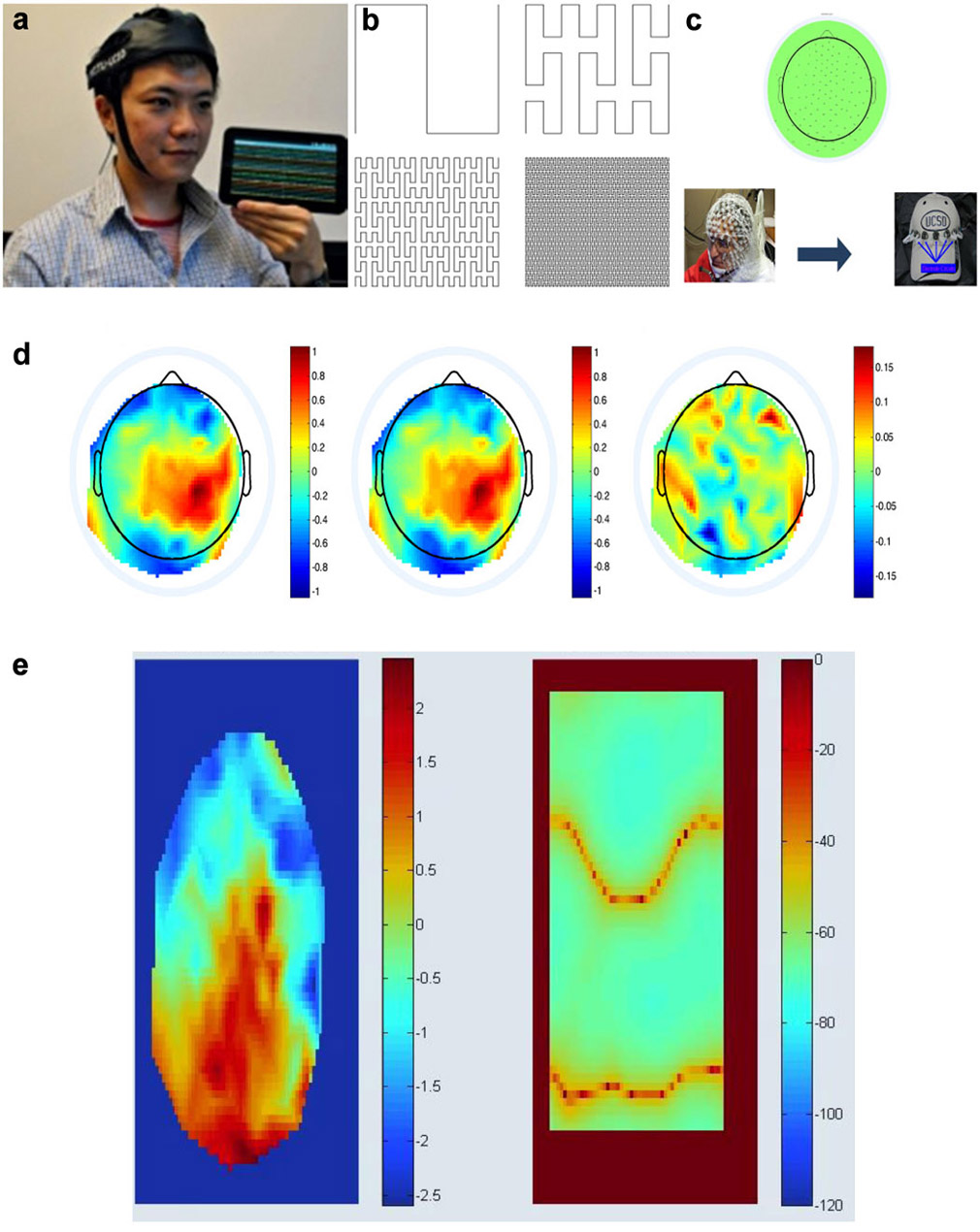 Figure 1. (a) User-friendly smartphone interface to the functional electroencephalography (f-EEG) head mount. (b) 1D Peano-Hilbert-type space-filling curve replaces the 3D layout of the electrodes. (c) High-density wired conventional EEG is replaced by a wireless hat. (d) Right-hemisphere brain f-EEG response stimulated by the visual input for a left eye dominator: before (left) and after compressive sensing (middle), as well as the difference errors (right). (e) Singlet electrode-averaged EEG (left) vs. pair-electrode fluctuation f-EEG (right) reflecting the subject's intention to point a computer screen cursor to the left as opposed to the right: 121 electrodes (1 node to 82 points), 250Hz (averaged over 1/16 second).

EEG functional information resides in the frontal, parietal, temporal, and occipital lobes of each hemisphere of the brain, and in the spaces involved in short- and long-term memory. We developed a smart algorithm that can capture correlations between pairs of electrodes (which provide data about the neural network) of high-density scalp brain-wave f-EEG for N electrodes (N∼100, either in contact with hair or not) during longitudinal noninvasive tracking of brain order-disorder transitions. Both the average and fluctuating f-EEG electric potentials are received and processed by the wearer's personal smartphone-type device.

A key component of our system is the use of compressive sensing (CS) strategies to overcome conflicting requirements between spatial electrode density, temporal resolution, and the rate of spatiotemporal throughput. The advantage of CS for f-EEG is that it speeds up the computation time, not by fast compression of data, but by acquiring and processing sparse data. Spatial sparseness is addressed by close proximity between active electrodes and desired source locations and using an adaptive selection of N active electrodes among 10N passive electrodes to form m-organized random linear combinations of readouts, m≪N≪10N. Temporal sparseness is addressed via parallel frame differences in the hardware.

Instead of 3D fast Fourier transforms (FFTs), we employ a 1D Peano-Hilbert space-filling curve, which preserves the local neighborhood relationships for rapid CS: see Figure 1(b). We use 1D FFT for sorting EEG signals in sparser frequency bins to facilitate m sparse linear combinations, m≪N, for wireless CS readout: see Figure 1(d). Whereas physicians traditionally use the average of all N electrodes at a density of a few square centimeters, we recommend computing the electrode-pair correlation function of the fluctuations by means of an efficient Wiener-Khinchin-Einstein formula of the Fourier inverse transform of the FFT power spectral density: see Figure 1(e).

In summary, we have described a portable, easy-to-use system for real-time in situ f-EEG measurement using CS technology intended for out-of-clinic applications. This user-friendly f-EEG is reported for the first time in a natural environment. It holds promise for the National Institute of Mental Health (NIMH) program in tracking childhood onset schizophrenia at home, as well as for sports medicine (traumatic brain injury) in the field and adaptive training in real-time biofeedback on the battleground. Next steps include developing strategies for filtering unwanted artifacts from high-density f-EEG, i.e., facial-muscle-related events and wireless environmental electromagnetic interference.

The authors represent three points of contact for an ad hoc working group known as Brain Order Disorder (BOD) under the National Institutes of Health (NIH) BRAIN Initiative. BOD consists of dozens of interdisciplinary scientists in academia and industry (represented by Binh Tran of the Catholic University of America), government (represented by François Lalonde of NIH/NIMH), and the Army and Department of Defense, represented by Harold H. Szu for the US Army Research, Development and Engineering Command (RDECOM)/Communications-Electronics Center of the RDECOM/Night Vision and Electronic Sensors Directorate.