Graphene exhibits a wide range of unique electronic and optical properties.1 Previous research has shown that a specific type of localized wave, a surface plasmon polariton, can propagate along a single layer of graphene or its bilayer.2–5 Both transverse magnetic (TM) and transverse electric (TE) polarized plasmons can theoretically exist in graphene, and their dispersion properties can be changed by applying an external gate voltage to the graphene sheet.6 This would allow us to construct effective two-dimensional metamaterial structures.7 Such structures could be used for nanoscale optical information processing and storage.

While the concept of graphene-based metamaterials has been proposed recently in a number of papers,7, 8 we extended this concept in order to exploit the large, nonlinear electromagnetic response of graphene at terahertz frequencies. Large values of nonlinear optical susceptibilities have been predicted theoretically,9, 10 and recently they were verified experimentally for the third-order nonlinear response.11 In this paper, we discuss how to employ these nonlinear electromagnetic responses to control the propagation of terahertz surface plasmons in structures containing graphene.

We studied the electromagnetic properties of the multilayer graphene structure shown in Figure 1(a), and derived the dispersion equation for the eigenmodes of the infinite multilayer structure for the cases of TM and TE polarizations:12

and KTE,TM is the Bloch wavenumber. We found that the structure is defined by the hyperbolic isofrequency contours in the terahertz frequency range for the TM polarization case. To evaluate the terahertz emission enhancement from this hyperbolic medium, we calculated the Purcell factor for the dipole placed on top of our structure, as shown in Figure 1(b), and showed that it is proportional to (λ/d)3 and that it can reach values of up to 108.

Figure 1. (a) Geometry of the multilayer graphene structure, and (b) frequency dependence of the Purcell factor (RIITM) of a dipole oriented along the graphene sheets.12σ: Conductivity. ∊: Permittivity. c: Speed of light in a vacuum.

We further studied nonlinear propagation of light in two coupled layers of graphene and demonstrated that this simple double-layer structure can operate as an efficient optical coupler for both continuous plasmon polaritons and for subwavelength spatial solitons.13 To describe the propagation of nonlinear plasmons in this double-layer graphene structure, we used the slowly varying envelope approximation usually employed in the physics of optical solitons. We found that three types of nonlinear modes can propagate in the double-layer graphene coupler: symmetric, antisymmetric, and asymmetric. In the linear regime, only symmetric and antisymmetric modes exist. However, above a critical power level, a symmetry breaking occurs in this nonlinear system when a novel, asymmetric branch emerges. This novel branch describes the nonlinear states where the power is not distributed equally between the lower and upper graphene layers.

Next, we focused our attention on the power-controlled switching of plasmon beams between the layers and studied numerically the propagation of a sech-like input beam launched into the upper layer: see Figure 2(a). The input beam was the fundamental solution of a single (uncoupled) nonlinear equation, and it described a spatial soliton. For the peak power density of 6W/m, the soliton beam width was about 50nm. This significant sub-wavelength localization was supported by the high effective Kerr nonlinearity of graphene.14 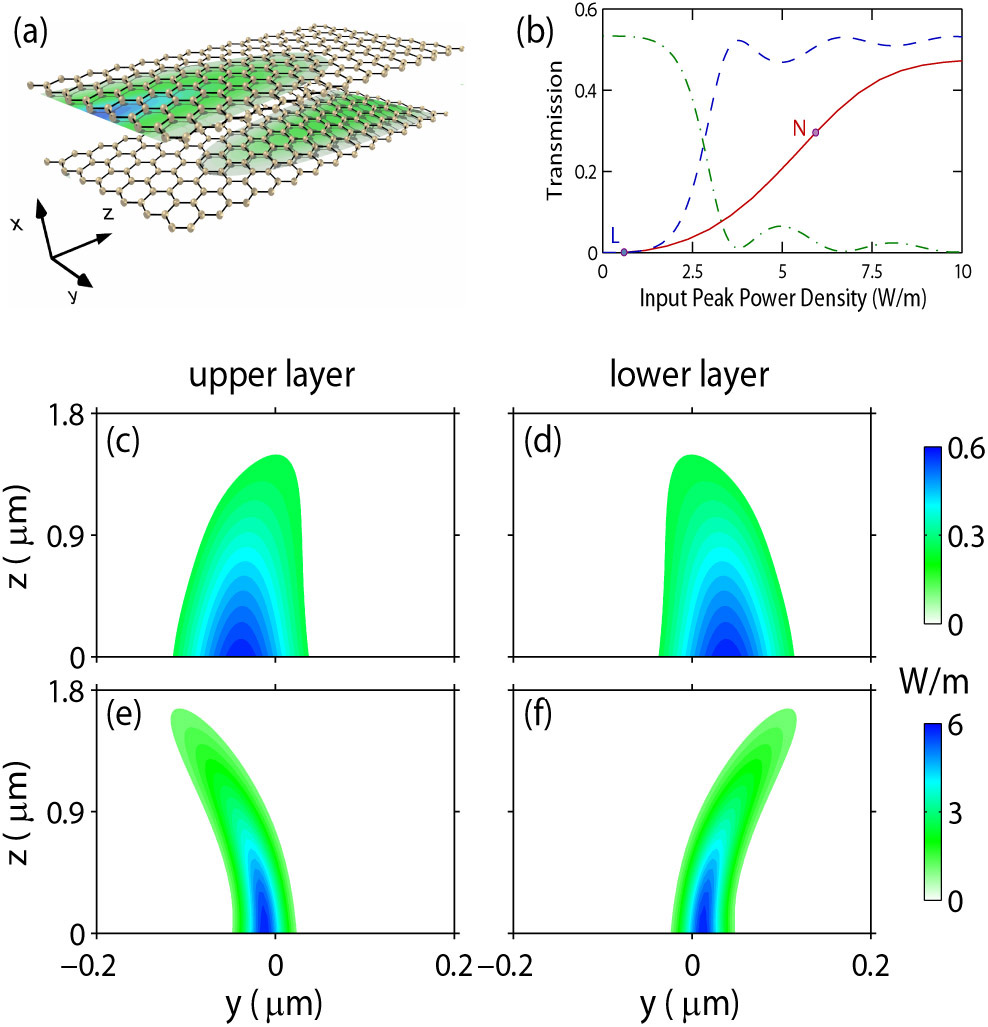 We compared the corresponding switching characteristics of the nonlinear graphene coupler for the continuous plasmons (whose amplitude is constant along y, shown as dashed curves) and for the beams of a finite extent including the soliton switching (solid curves) in Figure 2(b). The coupler length was selected at the half-beat length L=π/(2Q). When in the linear regime, the input power transfers completely into the second layer. Apart from an increase of the threshold power density, the two regimes of coupler operation could be clearly distinguished.

For relatively small input powers, the plasmon beam of the upper layer coupled to the lower layer and tunneled almost completely. The energy transfer between the layers was inhibited, and we observed the nonlinear regime when the plasmon beam remained in the upper layer. Importantly, the dissipation did not inhibit switching, but it did modify the slopes of the curves and the asymptotic value of the switching curve did not achieve unity: see Figure 2(b). Therefore, the beam may be effectively routed between the graphene layers by changing its input power.

From the power flow (6W/m) and the plasmon structure, we estimated the maximum amplitude of the electric field on the graphene layer at 7 · 106V/m, which is below graphene's breakdown threshold. We also explored the case when two in-phase beams of identical shape were launched into the layers, one beam in each layer. The beams were shifted initially by half of their width with respect to each other. In the linear regime, the power exchange between the layers led to effective attraction between the centers of mass of the beams: see Figure 2(c) and (d). However, in the strongly nonlinear regime the energy exchange was suppressed, and the mutual interaction of the optical solitons generated in the two different layers was accompanied by their repulsion: see Figure 2(e) and (f). To conclude, we showed that the layered graphene nanostructures can be used to control the propagation of the terahertz surface plasmons.

This work was supported by the Government of the Russian Federation (grant 074-U01) and by the Australian Research Council.

Pavel Belov heads the Metamaterials Laboratory of ITMO, and also holds an Engineering and Physical Sciences Research Council Advanced Fellow post in Queen Mary University of London in the UK. His research interests include metamaterials, nanophotonics, and classical electrodynamics.

Daria A. Smirnova is pursuing her PhD research at the Nonlinear Physics Center, where she focuses on nonlinear nanophotonics of graphene structures.

Ilya Shadrivov is a Queen Elizabeth II Fellow at the Nonlinear Physics Center. His current research interests include metamaterials, nonlinear optics of metamaterials and graphene, nanophotonics, and plasmonics.

Yuri S. Kivshar established the Nonlinear Physics Center and currently holds the position of ANU Distinguished Professor. His research interests include nonlinear photonics, optical solitons, plasmonics, and metamaterials. He has authored and co-authored more than 700 papers and received many awards, including the Lyle Medal of the Australian Academy of Science. He is a fellow of the Optical Society of America, the American Physical Society, and the Institute of Physics, and Deputy Director of the Center of Excellence for Ultrahigh-bandwidth Devices for Optical Systems.