Silicon (Si)-based solar cells have been widely developed in recent years due to the availability of abundant materials and mature Si semiconductor technologies that are used to produce them efficiently. However, one drawback to conventional Si solar cells is that their manufacture requires expensive, high-temperature dopant diffusion or ion implantation processes.

To increase the cost-effectiveness of Si-based solar cells, we have been studying methods of producing low-temperature-processed organic hybrid Si solar cells. In addition, to narrow the gap between the performance of hybrid cells and conventional Si solar cells, we are using a variety of approaches, including structuring the device's surface and applying surface-engineering methods to boost the hybrid cell's efficiency more than 10%.1, 2

Based on our experience developing various photon-management techniques, we have devised novel structures including core-shell and hierarchical geometries in Si/poly(3-hexylthiophene) (Si/P3HT) and Si/poly(3,4-ethylene-dioxy-thiophene):polystyrenesulfonate (Si/PEDOT:PSS) hybrid cells, respectively.1, 3 We find that structuring the Si surface not only enhances the light being trapped at the interface of organic and Si substrates, but also increases the junction area for more effective carrier collection, leading to concurrent improvement in optical and electrical properties.1, 3–5 By adopting hierarchical structures with appropriate surface treatment methods, we have achieved a high efficiency of 11.48% in Si/PEDOT:PSS hybrid solar cells with excellent omnidirectionality.1

We treated the Si substrate with an electrodeless chemical etching process to fabricate micropyramid arrays, and we built the hierarchical hybrid cell with the micropyramids and nanowires we structured using a metal-assisted etching process (see Figure 1). We controlled the length of the nanowire (see Figure 2) by carefully controlling etching time. Next, we spin-coated a PEDOT:PSS solution on the structured Si substrate, then annealed it in nitrogen. Finally, we thermally deposited silver and aluminum as top and back electrodes, respectively. Considering the trade-off among light trapping, junction area, and carrier lifetime, we have demonstrated the optimized nanowire length to be 234nm. 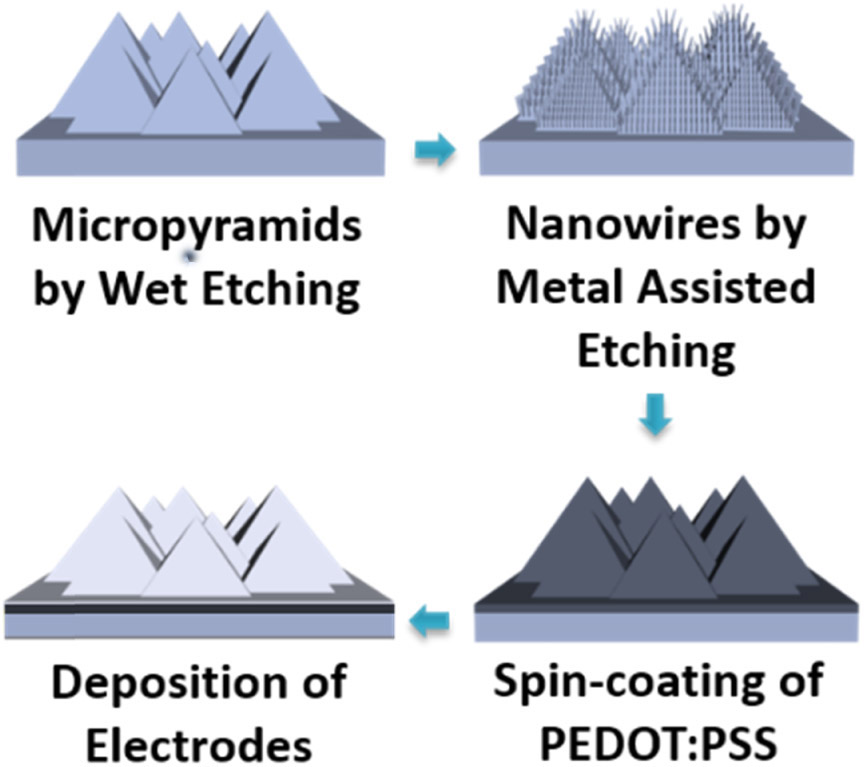 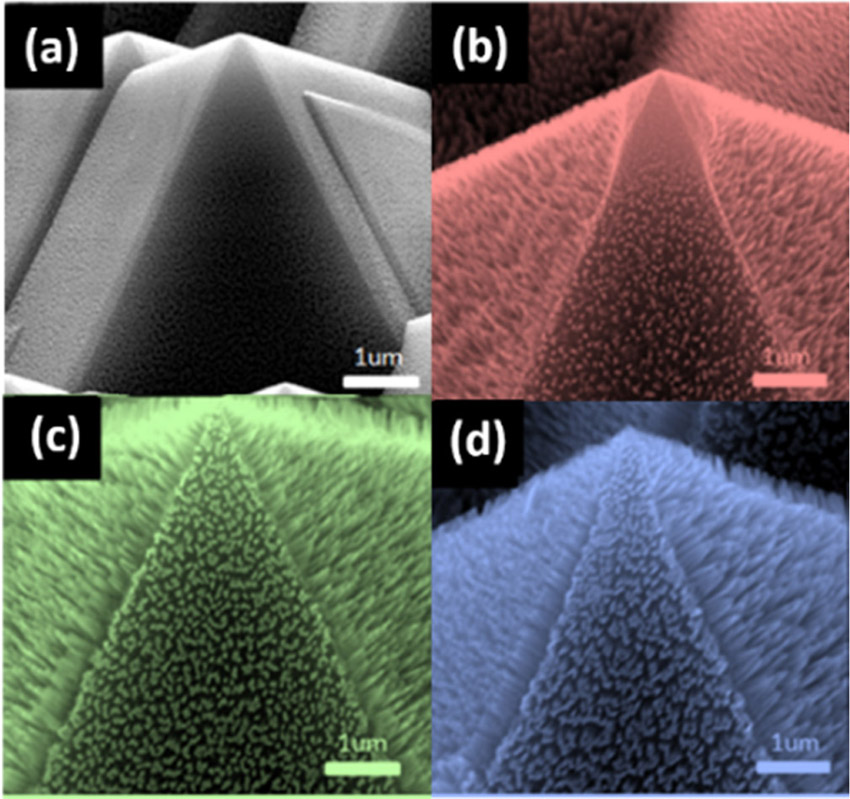 To further enhance the performance of the hybrid cell, we applied a water treatment to improve the interface quality. We immersed the Si substrate in high-temperature (100°C) deionized water for 1s prior to spin-coating the organic layer to create an ultrathin (1–3nm) oxide layer at the surface. The thin oxide layer can increase the hydrophilicity of the Si surface for better coverage of the organic layer and passivate the dangling bond at the Si surface to reduce carrier recombination at the surface. Our work shows that a water-treated cell exhibits an enhancement of fill factor from 61.27 to 64.06%, resulting in higher conversion efficiency (from 10.96 to 11.48%). 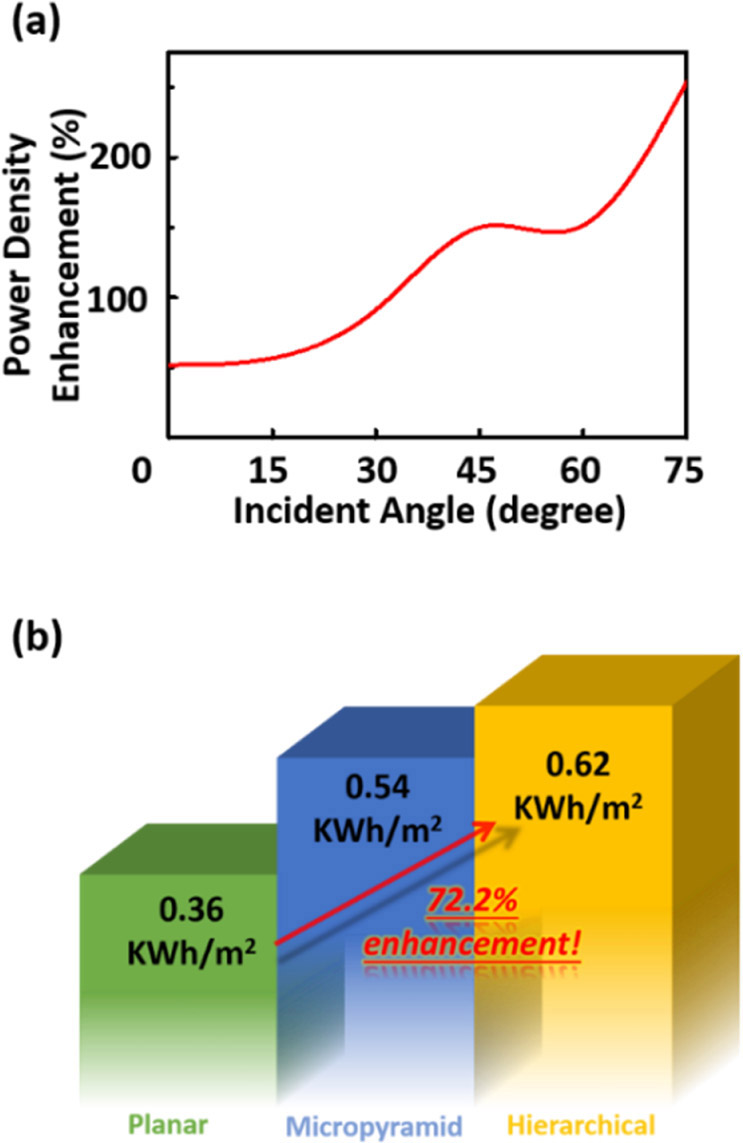 We found that hierarchical structures can effectively collect light from all directions and that, at high incident angles, ultrahigh enhancement of generated power density (253.8% at 75°) gives rise to a 72.2% enhancement of daily power generation. This impressive property can be used to replace highly expensive solar tracking systems for more cost-effective solar devices.

Our results showed that by adopting hierarchical structures and surface engineering techniques, we have developed an 11.48% efficiency hybrid solar cell with superior omnidirectionality. In addition, we are currently working on alternative routes to enhancing the performance of hybrid cells. Examples of this work include incorporating quantum dots that absorb UV light and emit visible light in the organic layer, optimizing surfactant concentration to balance conductivity with coverage of the organic layer, and improving the surface quality of the back. With these potentially promising approaches, we expect more low-cost and high-efficiency hybrid solar cells will be available for practical applications in the future.

This work was supported by the National Science Council and National Taiwan University.