Achieving invisibility cloaking in the terahertz regime has recently garnered a great deal of attention due to unique and promising emerging applications of terahertz technology. Particularly with recent advances in terahertz communications and radar, there has been an increasing demand for cloaking devices functioning at terahertz frequencies. The ultimate goal is to conceal a large object from being observed by terahertz radar in civilian or space communications.

So far, terahertz invisibility cloaks have been experimentally demonstrated in quasi-3D geometry based on both subwavelength building blocks and homogeneous uniaxial crystals.1, 2 These quasi-3D cloaks are also called ground plane or carpet cloaks, and they were proposed to overcome the difficulties of complete cloaks that require dielectric singularity, have high loss, and very narrow bandwidth.3, 4 One of the challenges that remains at terahertz frequencies is finding photo-curable dielectric materials with lower loss that allow for a broader response bandwidth. Indeed, the complete cloak that features 3D and broad bandwidth is the major challenge for the entire electromagnetic spectrum. Here we present experimental demonstrations of quasi-3D terahertz cloaks made from either 3D inhomogeneous metamaterials 1 or homogeneous 2 media.

The inhomogeneous cloak made from dielectric metamaterials was lithographically fabricated using a scalable Projection Microstereolithography (PμSL) process (see Figure 1). The triangular cloaking structure has a total thickness of 4.4mm, comprised of 220 layers of 20μm thickness. The distribution of the varying hole geometry can be clearly identified in the scanning electron microscope (SEM) images. The space underneath the bump is designated as the cloaked region. The cloak operates at a broad frequency range between 0.3 and 0.6THz, and is placed over an α-lactose monohydrate absorber with rectangular shape. The α-lactose monohydrate exhibits a resonant attenuation signature at 0.53THz due to the presence of collective vibrational transition modes. We measured the reflected terahertz wave in four cases: (I) a flat reflective surface, (II) exposed lactose on a reflective surface, (III) a control structure with a reflective bump placed on top of the lactose, and (IV) the cloaking structure placed on top of the lactose. The measurements were carried out in an angular-resolved reflection terahertz time domain spectroscopy (THz-TDS) system. The terahertz cloak in case (IV) conceals both the geometric and spectroscopic features of the lactose, which then closely resembles case (I), demonstrating the successful design of the cloak.

Figure 1. Inhomogeneous quasi-3D terahertz cloak. (a) Schematic diagram illustrating the projection micro-stereolithography system fabricating a 3D metamaterial cloaking device. The grayscale of individual pixels within each 85.2×85.2μm unit cell can be adjusted so the holes can be fabricated with sub-pixel precision. (b) Optical and scanning electron microscope images of the fabricated cloaking device. The gradual change in hole size near the bump can be clearly observed.1

We also demonstrated a large-scale terahertz invisibility cloak made from birefringent crystalline sapphire (see Figure 2). This homogeneous cloaking device features a large concealed volume, low loss, and broad bandwidth. In particular, it is capable of hiding objects with a dimension nearly an order of magnitude larger than that of its lithographic counterpart, but without involving complex and time-consuming cleanroom processing. The cloak was made from two 20mm thick high-purity sapphire prisms. The area beneath the cloak is 1.75mm tall, nearly ten times taller than the inhomogeneous counterpart. In addition, the useful bandwidth increased from 0.3-0.6THz to 0.2-1.0THz due to different design approaches and material absorption properties. The volume of the cloaking region is approximately 5% of the whole sample. 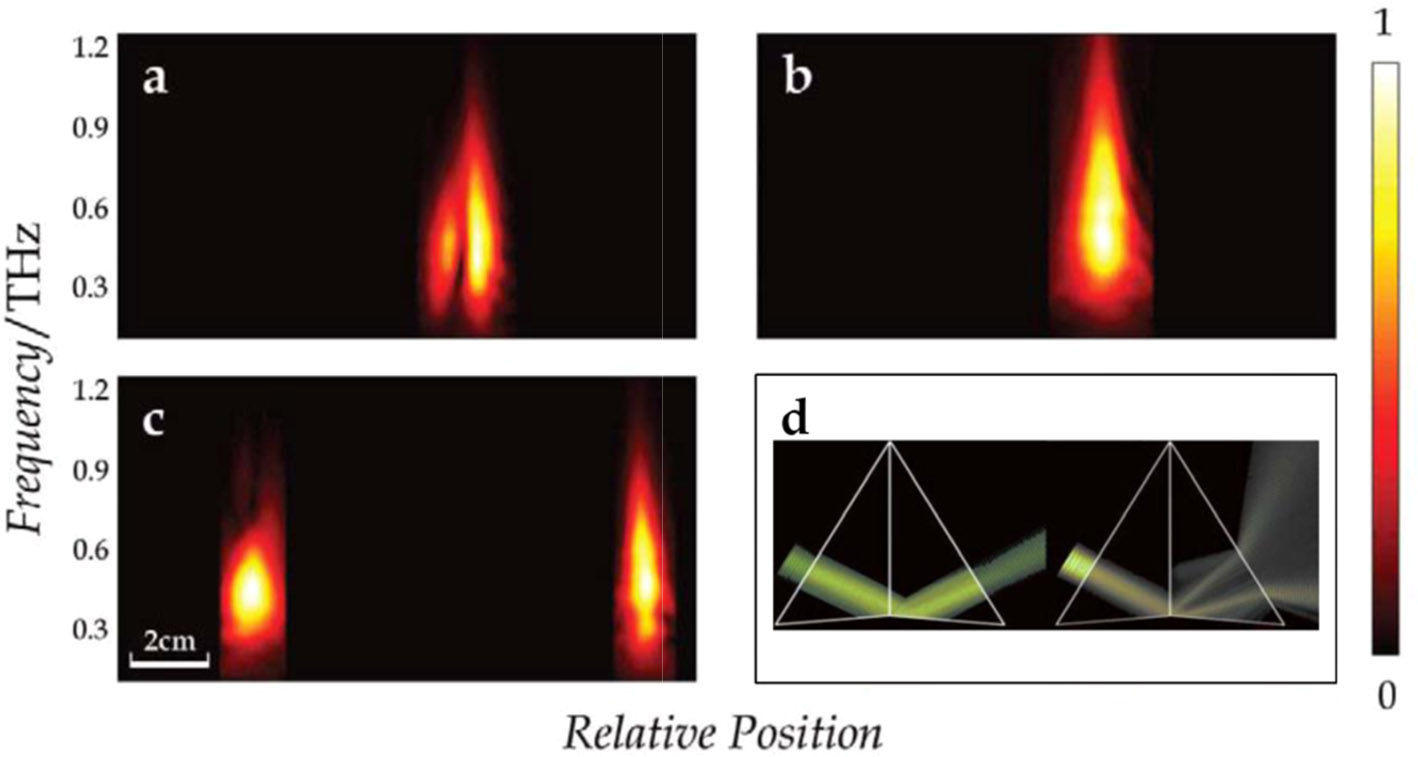 Figure 2. Measured cloaking effect of a homogeneous terahertz cloak with respect to the relative positions (x-axis) and the frequency (y-axis). The color represents the relative spectral amplitude of (a) cloaking, (b) flat surface reflection, and (c) reference with the same cloak lens. A schematic of the cloak design is shown in (d).2

We characterized the homogeneous cloak using the same terahertz spectroscopy system, except that no test sample was placed in the cloak region. Instead, we used the uncloaked transverse electric polarized beam profile as the reference, which exhibits significant beam splitting: see Figure 2(c). The THz-TDS results indicated that the terahertz invisibility cloak successfully concealed both the geometric and spectroscopic signatures of the object, making it undetectable to the observer. As shown in Figure 2, the reflected transverse magnetic beam from the cloak (a) shows nearly the same profile as that reflected by a flat mirror (b). On the other hand, for the transverse electric beam, the detector received two largely separated beam profiles at the left and right side of the cloaking profile, shown in (c).

This straightforward cloaking approach greatly reduces the complexity in design and fabrication of the metamaterial-based cloaks. More importantly, the initial work in the visible regime confirmed that this is a promising way toward practical macroscopic cloaking devices with frequency and incidence angle robustness.

In conclusion, we demonstrated that quasi-3D invisibility cloaks in the terahertz regime, comprised of either homogeneous or inhomogeneous media, can completely conceal both the geometrical and spectroscopic signatures of a rectangular absorber placed beneath them. Our next steps in this direction will explore innovative approaches toward a complete 3D cloak for terahertz wavelengths. The keys will be the transformation optics design, unique metamaterial building blocks, and novel fabrication processing.