Three-dimensional televisions are not successful because their 3D images do not meet people's expectations. Viewers have to wear 3D glasses, and visual fatigue prevents long-duration viewing. An ideal 3D display technique that overcomes these problems is holography. People are anticipating holographic displays because they have seen them depicted in science fiction movies. As development of 2D display technologies has been reaching saturation, many research groups around the world are developing holographic displays.

Holograms are interference fringe patterns with fringe pitches as small as the wavelength of light. Their electronic implementation therefore requires display systems that have a pixel pitch of approximately one micron. For 2D displays, the screen size can be enlarged easily by increasing the pixel pitch. The screen size for holographic displays, however, can only be enlarged by increasing the number of pixels. For instance, to obtain a 40-inch screen, 886,000×498,000 pixels are required. Several research groups are developing ultrahigh-resolution spatial light modulators (SLMs) and techniques for using multiple SLMs as a way to produce holographic displays with very large pixel counts: see Figure 3(a) and (b).

About 20 years ago, a research group at the Massachusetts Institute of Technology argued that development of such ultrahigh-resolution SLMs and use of a huge number of SLMs were not practical, and they proposed a novel approach: high-resolution 1D light modulation by an acousto-optic modulator followed by 2D scanning by a polygon mirror and a galvano mirror.1 That is, the system produces a small horizontal sliver of the hologram image and scans this sliver across the full display area somewhat like the raster scanning of an electron beam across the screen of a cathode ray tube: see Figure 3(c). This approach has been very successful, with several display systems demonstrated, but these systems require high-speed scanning in the horizontal direction.

Our approach is to combine 2D light modulation with 1D scanning.2 In brief, our system produces a full vertical slice of the 3D image and scans horizontally across the display area: see Figure 3(d). First, a microelectromechanical system (MEMS) SLM modulates light two-dimensionally at a high frame rate (see Figure 1). Then an anamorphic imaging system, comprising two orthogonally aligned cylindrical lenses, squeezes images horizontally and stretches them vertically. The resulting vertically enlarged image, called an elementary hologram, has a reduced pixel pitch in the horizontal direction, which increases the horizontal viewing angle. Finally, a horizontal scanner scans the elementary holograms to enlarge the width of the screen. A single-sideband filter in the anamorphic imaging system eliminates the conjugate image and zero-order diffraction light. Our system does not require vertical scanning, but does require horizontal scanning at the video rate (e.g., 60Hz). 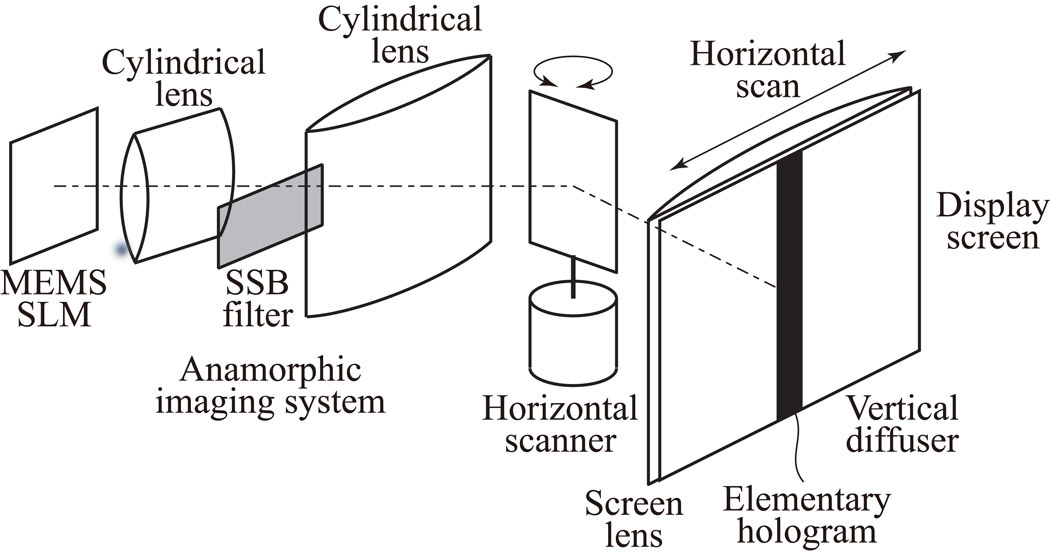 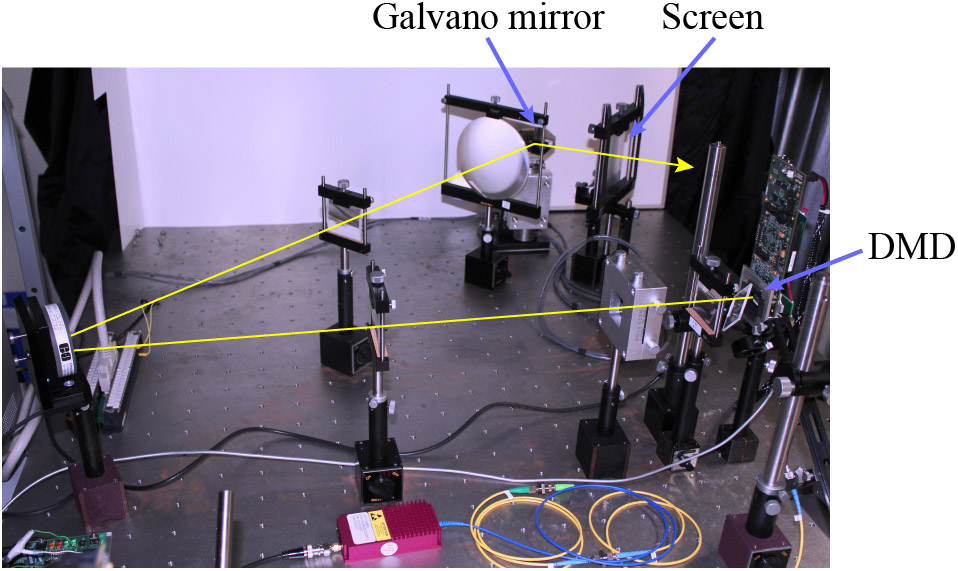 In our first experimental system, we used a digital micromirror device (DMD) with a frame rate of 8000Hz as the MEMS SLM (see Figure 2). We used a galvano mirror with a scanning frequency of 60Hz as the horizontal scanner. The horizontal pixel pitch was reduced to 2.5 microns, the viewing zone angle was enlarged to 15°, and the screen size was enlarged to 3.5 inches. Figure 4 shows a reconstructed image.

Figure 4. Reconstructed 3D image of a hand, as captured from three different horizontal positions. The red symbols were displayed at distances of 50mm (|||), 100mm (⋄), and 150mm (×) in front of the screen.

An advantage of holography is that it can generate 3D images on which the human eye can focus. Conventional glasses-free 3D displays that use a lenticular lens or a parallax barrier do not produce such images, which leads to vergence-accommodation conflict, causing visual fatigue. (Vergence is the opposite rotation of the left and right eyeballs to point toward an object at a specific distance, whereas accommodation is the focusing function of an eye.) We studied this property of our system by measuring the accommodation of people looking at images in our holographic display.5 We found that responses to the reconstructed images were similar to those for real objects, even when the reconstructed images were 400mm in front of the display screen.

In summary, we have developed a technique for producing enlarged 3D color images by anamorphic imaging and 1D scanning of an elementary hologram generated by MEMS. Our approach avoids drawbacks of other schemes, such as requiring large areas of SLMs or a high rate of raster scanning. Our method benefits from high-speed operations and high integration of micromirrors provided by MEMS technology. So far, however, we have used MEMS SLMs that were developed for video projectors. In future work, development of MEMS SLMs that are specialized for holographic displays will improve the display performance, as will the use of multiple MEMS SLMs.

Yasuhiro Takaki is a professor. He received his BS, MS, and Dr. Eng. degrees from Waseda University in 1986, 1988, and 1992, respectively. His research interests are super-multiview displays and holographic displays.