To address this challenge, we previously developed a grayscale optical correlator (GOC) system using a 4f (frequency configuration) optical Fourier transform (FT) architecture and demonstrated its application in real-time automatic target recognition (ATR).1–3 In that design, the GOC consisted of a pair of ferroelectric liquid crystal SLMs (FLC SLMs) as the input and filter devices, a pair of FT lenses, and a CMOS sensor to detect the sharp spike(s) of light that reveal the spatial locations of the detected target(s) in the input range. We recently updated the GOC architecture using the relatively low cost, emerging digital micromirror device (DMD) developed by Texas Instruments as the SLM. The new GOC design uses a pair of DMDs to replace the FLC SLMs.4–6 In addition to their cost-effectiveness, which will facilitate both defense and commercial use of the system, the advantages of the DMD SLMs include high resolution (HD format, 1920×1080 pixels) and high-precision correlation operations.

Figure 1 shows a schematic diagram of the GOC architecture using a pair of DMD SLMs. Because these are reflection-type devices, the input laser beam impinging on the input SLM is reflected back toward the FT lens. The input and output laser beams each subtend an angle of 12° with the perpendicular axis of the SLM. The FT lens focuses the input beam onto the filter SLM placed at the rear focal plane. The light beam reflected by the filter SLM is inverse-transformed by the inverse FT lens. A CMOS photodetector array is placed at the output correlation plane. 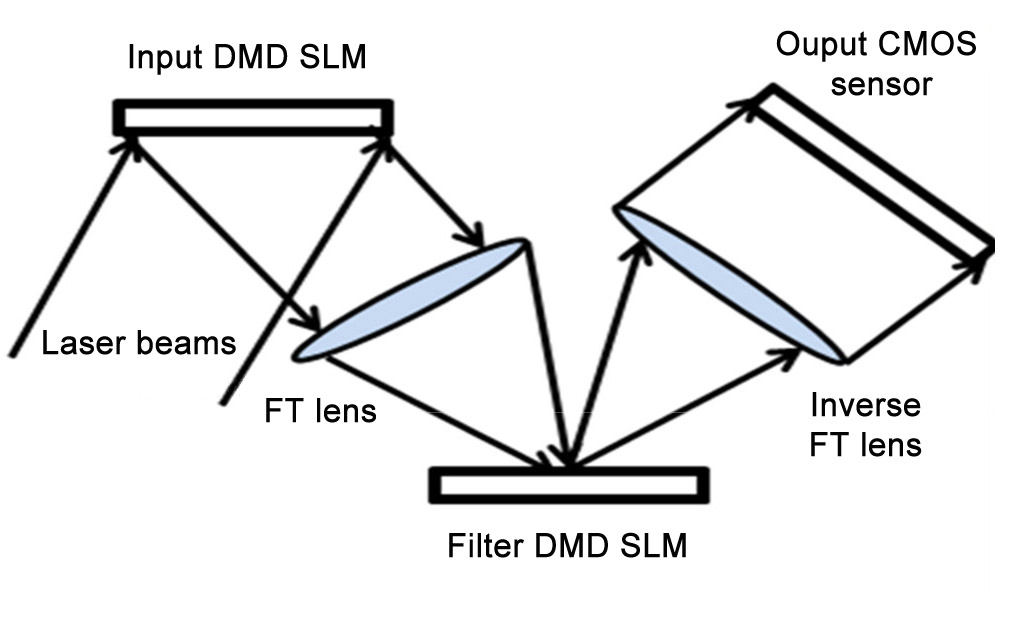 A DMD uses pulse width modulation7 to achieve various levels of light intensity on each of the pixels in the DMD array (see Figure 2). The filter function is ‘complex-valued’ (i.e., it includes both the amplitude and phase component), whereas the positive ‘real-valued’ modulation scheme used by the DMD can only directly display the amplitude component. Consequently, we used a computer-generated hologram (CGH) technique to encode a complex-valued pixel into a set of positive real-valued pixels. To generate a complex-valued correlation filter that could be implemented in the DMD SLM, we employed the CGH algorithm proposed by Burckhardt,5 which decomposes a complex-valued function into three real and positive components. 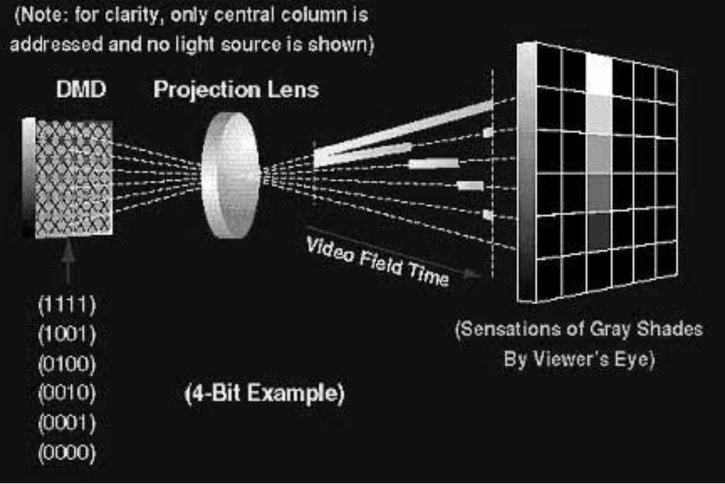 Figure 3. Optical implementation of a Burckhardt-type computer-generated hologram (CGH) using a DMD SLM. (a) The digital Fourier transform of a NASA astronaut image was used as the input for synthesizing the CGH. (b) Inverse transform of the CGH. The central zero-order component was eliminated. (c) The output of the optically inverse Fourier transformed CGH. The result matches that of the simulation shown in (b).

We also developed an analog holographic recording scheme that uses the DMD SLM as the data input device. In our experimental investigation, we displayed an 8-bit grayscale image in a DMD SLM and recorded a hologram in a photorefractive crystal. Figure 4(a) shows the input 8-bit ‘train station’ image, and Figure 4(b) the readout holographic image.

Figure 4. Experimental testing of an analog holographic recording of a grayscale image using a DMD SLM: (a) 8-bit ‘train station’ input and (b) holographic readout.

In summary, we designed a new high-speed optical processing system architecture using the emerging high-speed, high-resolution DMD SLM. We have also designed an optical implementable complex-valued CGH correlation filter and experimentally demonstrated its implementation using a DMD SLM. In addition, we have shown experimentally that the DMD SLM can be used as the input device for a real-time holographic data recording system. Our results suggest, for the first time, that DMD SLMs can be used effectively to synthesize complex-valued optical spatial filters, including correlation and bandpass filters. As a next step, we are investigating system implementation of our optical processor.

This research was carried out at the Jet Propulsion Laboratory, California Institute of Technology, under a contract with NASA.

Thomas Lu is a senior engineer. He has developed neural network and 3D imaging sensor technologies for various commercial, Department of Defense, and NASA applications. He received his PhD from the Pennsylvania State University. He has co-authored over 70 papers.

George Reyes is an optical engineer. He has extensive experience in developing optical processor and holographic data storage systems. He received his BS in optical engineering from the University of La Verne, CA, in 1990.

Brian Walker is a student in the School of Electrical and Computer Engineering. He has substantial experience in optical processing and holographic technology development in both algorithm simulation and hardware implementation.