Maximizing the efficiency and affordability of high-performance radar

Radar systems use radio waves to determine the range, altitude, direction, or speed of objects. Radar applications are widespread, e.g., in defense, space, commercial, and medical investigations. In some cases, however, such as moving target indication (MTI) radar,1 performance can be substantially degraded by interference and thermal noise. Clutter—undesirable returns from a target of interest range bin (a set of discrete elements or cells along a single radial ring of radar data)—is the most difficult interference source to handle. Synthetic aperture radar (SAR) knowledge-aided (KA) schemes were developed to deal with this problem, such as the Defense Advanced Research Projects Agency (DARPA) KA Sensory Signal Processing and Expert Reasoning (KASSPER) program.2 Although these schemes could yield high signal-to-interference-plus noise ratio (SINR) radar performance, the designs were subject to severe constraints. For instance, the SAR imagery requires a very large amount of memory storage, and the on-line clutter covariance matrix evaluations that were involved presented extreme computational burdens. In addition, it was not possible to achieve fast and powerful synergistic storage space and computational time compression solutions without a first-principles guiding theory for radar designs.

I was able to solve these limitations in a novel way through KASSPER3 after I discovered that the radar design guiding theory was part of the universal cybernetics (UC)4 duality (UC is the study of control and communications in living and nonliving systems). I discovered the UC duality (see Figure 1) in 1978 through control theory,5 which models the behavior of dynamic systems that have inputs. More specifically, through the Kalman linear-quadratic-Gaussian (LQG) control solution (see Figure 1) I found that synergistic physical and mathematical dualities arise in efficient system designs. The ‘physical duality’ expresses the separation of the system design into a space-uncertainty communication problem (Kalman filter design in LQG) and a time-certainty control problem (linear quadratic controller design in LQG). The ‘mathematical duality’ conveys the appearance of identical mathematical structures (Ricatti design equations in LQG) in the separately designed communication and control subsystems. The novel power-centroid (PC) radar approach6, 7 that we have subsequently developed is based on this guiding theory (see Figure 1). The term ‘power-centroid’ refers to the center of the clutter power distribution in the circular front range bin. The PC radar was originally designed in a KA manner, but later become knowledge-unaided (KU).8 The KU version was, surprisingly, still able to yield high SINR. 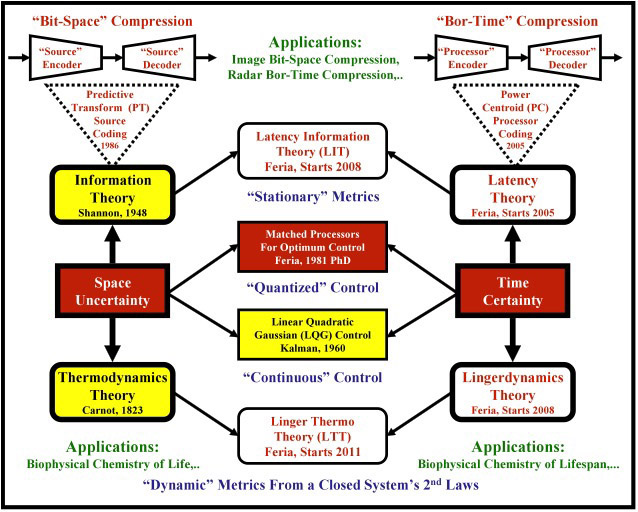 Our first application of the UC duality was to quantized control, through which matched processors (MPs) were produced for optimum control in 1981.5 Whereas LQG control methods deal with continuous control, MP control is quantized. The certainty-based parallel structures in the control's MPs represent the time dual (paired concept) of communication's uncertainty-based parallel structures in matched filters for bit detection. Unlike Bellman's dynamic programming, MP control does not suffer from an exponential increase in the computational burden as the process state dimension increases in value (the ‘curse of dimensionality’).9

During the final year of the KASSPER program (2005), our use of the UC duality led to the discovery of latency theory,3 which is the time dual of information theory (see Figure 1). From these two theories, we in turn developed the synergistic latency information theory (LIT)10 that is the basis for our PC radar approach (see Figure 1). We were ultimately able to reveal the linger thermo theory (LTT)11 as the dynamics dual of the stationary LIT in 2011. In LTT, new ‘lingerdynamics’ (which deal with the lifespan of living and non-living systems) are the time dual of thermodynamics.11–14 With LIT we can provide affordable adaptive radar solutions, and with LTT we have presented a lifespan theory for biological systems11,13,14 that includes a novel Boltzmann thermo source entropy for flexible phase media.13,15 In LIT and LTT we use uncertainty-entropy space metrics to describe the system's source and retention functions, and certainty-ectropy (ectropy is the time dual of entropy) metrics to describe the processor and motion functions. Although the LIT metrics are stationary, the LTT metrics are dynamic. This LTT ‘dynamic metric’ property is a natural consequence of the second law of thermodynamics12 (i.e., the Boltzmann source entropy metric increases with time) and three additional duality laws for a medium's retention, processing, or motion functions. These laws state that the new LTT retention entropy metric, LTT processor ectropy metric, and the LTT motion ectropy metric all increase with the passing of time.11

In particular, our PC radar approach (embedded within MTI, shown in Figure 2) emerged from processor coding within latency theory. Although we use a predictive transform (PT) source coder to achieve high ‘bit-space’ compressions, we use a PC processor coder to obtain high ‘bor-time’ compressions (i.e., the smallest possible number of binary operator levels between processor input and output). In the PC radar technique a processor encoder, followed by a processor decoder, is used to derive the front clutter covariance matrix—Ccf(θAAM)—that is a function of the antenna array misalignment angle (θAAM). It is the objective to measure the front range-bin PC with the encoder. In a symmetrical stationary-clutter scenario, the PC location is in the pointing direction of the physical antenna pattern (PAP), as shown in Figure 3(a). In contrast, the decoder uses the measured PC to select a relevant Ccf(θAAM) from a set of stored matrices (the elements are matched to unique PC and θAAM quantization levels). The selected Ccf(θAAM) is then used to evaluate the interference-plus-noise covariance (R). We achieve this by modeling it with the covariance matrix tapers (see Figure 2) that contain other back clutter, jammer, range-walk, internal-clutter-motion, channel mismatch, and thermal noise covariance cases. Our final step is to multiply the inverse of R by the target steering vector to yield a radar weighting gain for the received MTI signal, which leads to the best SINR target detection. 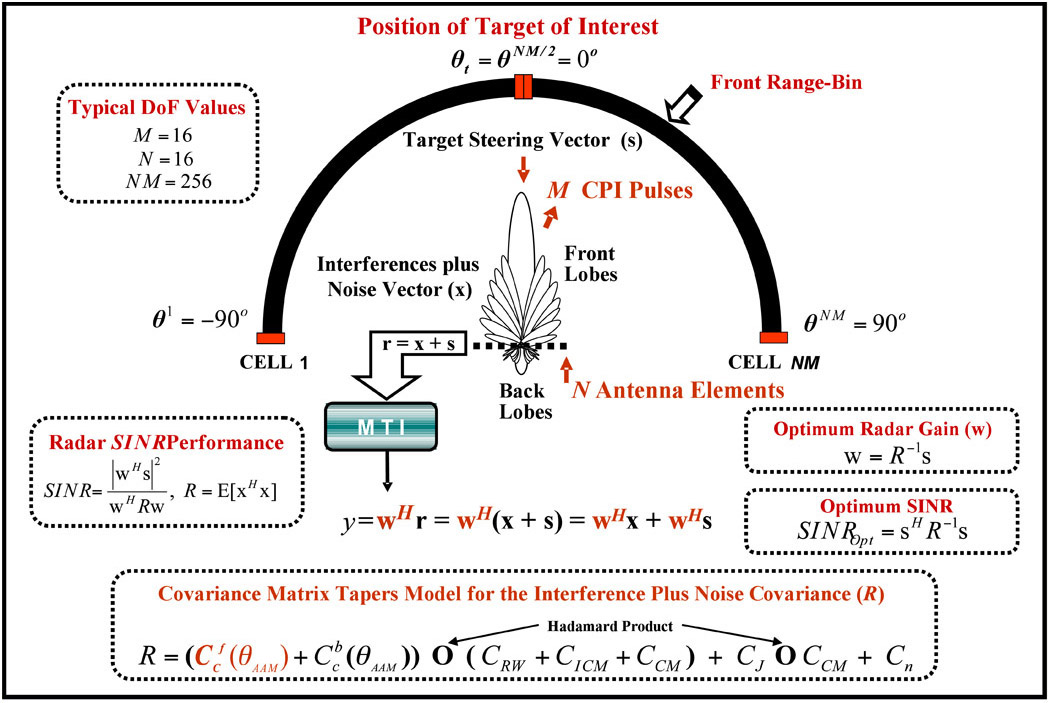 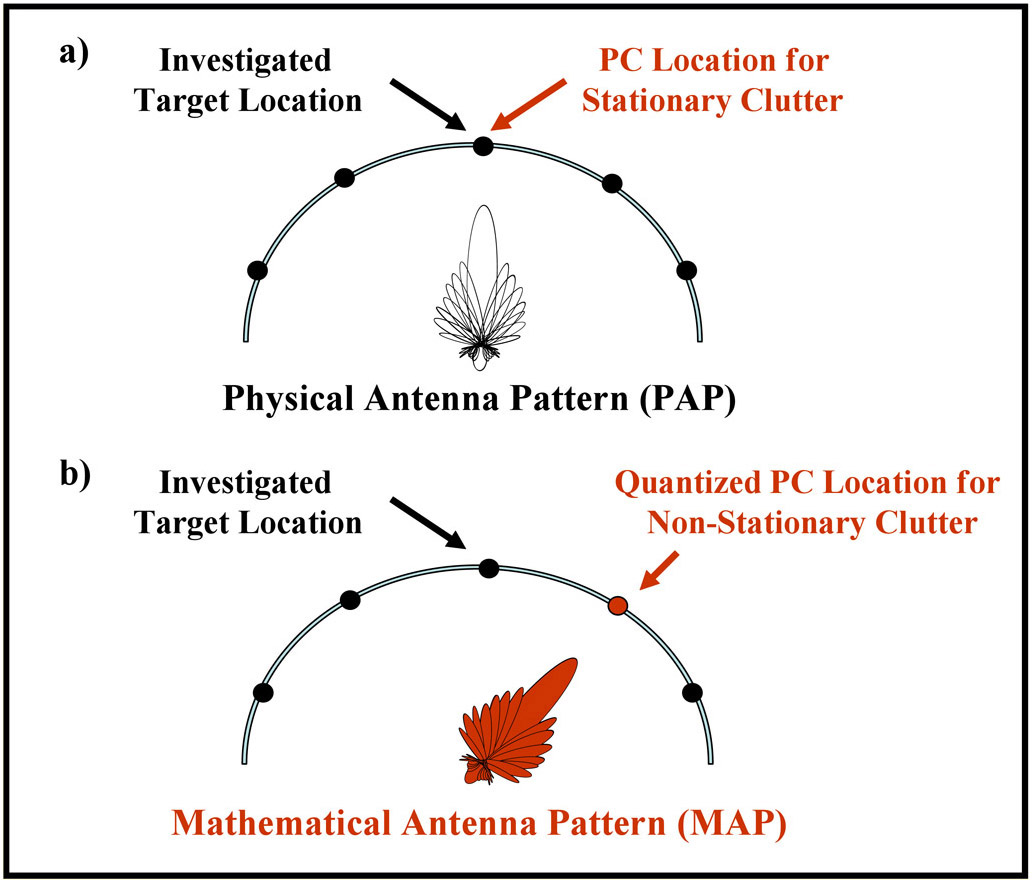 Both our KA and KU PC radar methods emulate the SINR levels of high-performance KA adaptive radar. This is enabled by the mathematical antenna patterns (MAPs) that we use in the off-line evaluation of the Ccf(θAAM) set. More specifically, when Ccf(θAAM) is evaluated off-line for a given PC quantization level, a MAP pointing toward the given PC—see Figure 3(b)—replaces the PAP—see Figure 3(a)—used in the original defining expression.15 The MAP thus acts as a compensator for PC measurements that deviate from the PAP pointing direction, due to non-stationary clutter. When the PC processor-decoder receives a quantized PC (from either KA or KU measurements) and an appropriate θAAM level, it retrieves the best-matched Ccf(θAAM) from its memory.

The PC radar approach we have designed yields excellent SINR performance under difficult environmental conditions, even with just a few PC quantization levels.15 The KA version derived through the KASSPER program offers a significant improvement in implementation over existing KA techniques because ‘radar blind’ image compression of SAR data can be used. The post-KASSPER KU PC radar scheme, however, is superior because the PC is derived solely from an on-line sample covariance matrix. Most importantly, this very simple KU PC radar matches the SINR performance of KA PC radar. We now expect the PC radar concept to be used extensively in cognition and smart antenna fields of research, as well as for radar and radio applications where non-stationary clutter is always present. We are also considering solutions for other complex radar situations, and we plan to use our PC radar cybernetics approach to tackle LTT biological investigations.

This article is dedicated to the memory of Norbert Wiener (1894–1964), the originator of cybernetics. The author thanks Joseph R. Guerci (former director of the Special Projects Office at DARPA) for instigating his participation in the KASSPER program.

Erlan Feria received his PhD in electrical engineering from CUNY's Graduate Center and has been a professor of engineering science in the Engineering Science and Physics Department since 1982. His main research interest is efficient cybernetics-based synergetic solutions to living and non-living system designs. He is also a member of the program committee for SPIE Defense, Security, and Sensing.