New diagnostic probes are needed for detection of tumor cells and tumor-supporting immune cells (macrophages), which are increasingly of interest in tumor biology and the development of cancer therapies. Many tumor types express an abundance of the translocator protein (TSPO), for which several types of chemical probes exist for non-invasive imaging. These probes simultaneously detect the supporting macrophages and tumor but without the ability to resolve the two.

We have discovered that analogs of one particular probe, DPA-713, detect tumors and macrophages soon after administration. Later, the probe exhibits selective trapping by macrophages (the process of internalizing and retaining the tracer in a cell), allowing time-resolved delineation of tumor from macrophage. We developed two optical analogs of DPA-713 that efficiently illuminate tumors and later activate macrophages. They are useful in observing inflammatory diseases including tuberculosis, rheumatoid arthritis, osteoporosis, and pancreatitis.

Several groups have successfully imaged TSPO, mostly in the context of neuroinflammation1–4 or brain tumors5–8 due to a very low background of TSPO expression in healthy brains. TSPO expression in peripheral tissues such as heart, lungs, liver, kidneys, adrenal glands, gut, and gonads is very high, making imaging of tumors and macrophage cells difficult. Imaging of inflammation from peripheral limb arthritis9 or from infections in limbs is possible using probes for TSPO, but the tracer can be taken up by normal bone marrow adjacent to the cortical bone. The discovery of time-resolved separation of TSPO-specific uptake from pure macrophage uptake now allows for clear delineation of sites of inflammatory macrophage accumulation in any part of the body.

Using our optical DPA-713 analogs, we injected animal models intravenously with 6nmol of imaging probe and imaged using a dedicated fluorescence camera after one and/or 24 hours of uptake and circulation within the animal. We can scan animals multiple times to capture changes in tumor or macrophage distribution and densities over the course of disease.

We synthesized two optically active versions of DPA-713: DPA-713-IRDye680LT (680nm excitation, 710nm maximum emission) and DPA-713-IRDye800CW (790nm excitation, 810nm maximum emission), which we evaluated in several experimental models of cancer, inflammation, and infection10 (see Figure 1). Principally, these optical analogs guide development of radiolabeled analogs (those with a radioactive marker) for clinical translation. We achieved this by corroborating observations from scans using the radiolabeled analogs and multichannel fluorescence microscopy. These confirm tissue and cell-specific probe disposition based on the similar movement of optical and nuclear analogs through the body. 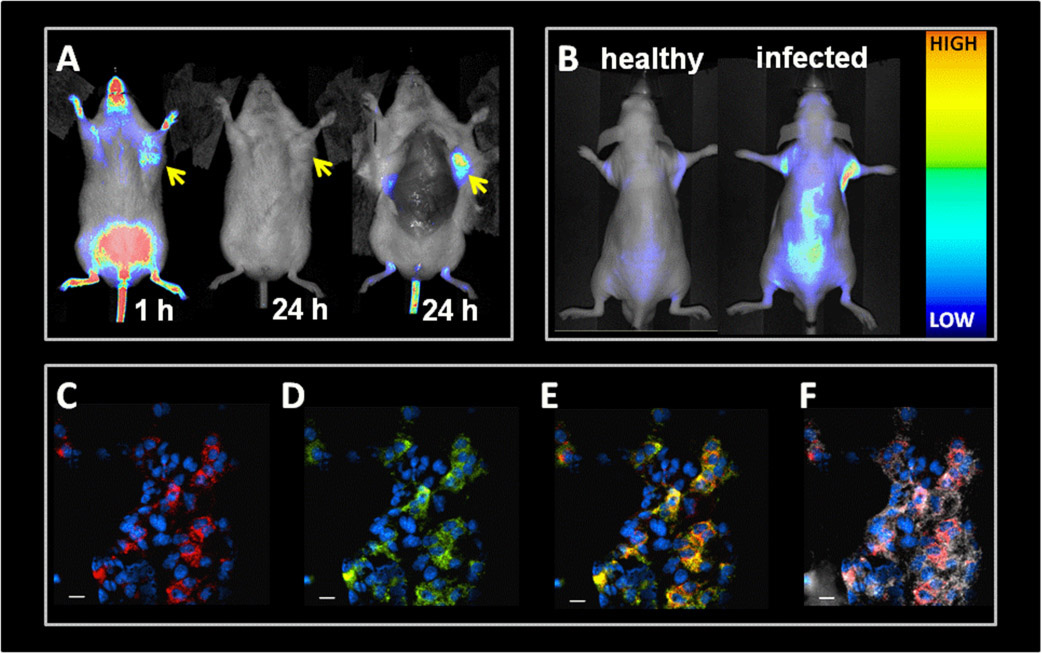 We plan to have a radiolabeled analog in the clinic within a few months and to use this to scan individuals with tuberculosis, rheumatoid arthritis, and likely prostate cancer. We may use the fluorescent analogs presented here in clinic with fluorescent endoscopy to delineate sclerotic esophageal or gastrointestinal lesions and differentiate from cancer.

The author would like to acknowledge Haofan Wang, Ph.D. for synthesizing both fluorescent DPA-713 analogs, NIH R01 grant CA134675, and funding from Sibley Memorial Hospital.

Catherine Foss holds a PhD in biochemistry from the University of Notre Dame. She focuses on new molecular probe development for multiple molecular targets and pathologies including cancer, inflammation, and infection imaging. She is currently an instructor of radiology.

Martin Pomper, MD holds a PhD in medicine and radiochemistry from the University of Chicago and is the William R. Brody Professor of Radiology at Johns Hopkins University. He is a neuroradiologist and also directs a diverse group of imaging scientists with emphasis on new probe development for cancer and neuroinflammation.