Optical systems typically are developed through the largely independent design of the separate components (i.e., lens, sensor, algorithms, display). In this approach, a systems engineer provides an intermediary framework and allows margins between the components to be traded. However, as optical systems become more complex, and as interdependence between components significantly impacts system performance, this ‘manual’ systems design approach becomes less likely to yield optimum solutions.

Metrics can be developed for camera systems that are of special interest for defense applications, such as the probability of task performance metric. This metric evaluates how likely it is for a human to observe a specific object at a given distance. All the different parts of the system have a role in calculating this metric. The first of these aspects is the object, i.e., the contrast of the target relative to the background, clutter, and atmospheric effects. Lens factors include transmission, aberrations, f-number, and magnification. The system's sensor can be characterized by pixel size, pixel pitch, the number of pixels, and noise characteristics. Signal processing has an impact on both the signal and the noise of the system. Several parameters can be varied for the system display, i.e., the pixel size and pitch, brightness, contrast, distance to the viewer, and overall size. Finally, the contrast sensitivity function and the number of eyes viewing the system can be varied in the visual system.

We have developed software that can be used to overcome the inherent limitations of the current optical systems design approach. Instead of designing the individual components separately and then assembling them into a single system, our software enables the direct optimization of all the system components together.1, 2 Our optimization and simulation software incorporates the target, lens, sensor, signal processing, display, and observer models, as well as their associated design degrees of freedom. By applying our optimized system model approach, we are able to produce an end-to-end design of an imaging system that uses the most relevant metrics (e.g., detection range, size, weight, power, and cost), as shown in Figure 1.

Figure 1. List of components and primary metrics used in our system-level model. Lines indicate which components influence the different metrics.

To enable the direct optimization of the probability of task performance, we implemented the targeting task performance metric (TTP)3 and validated it against the Night Vision Integrated Performance Model (NV-IPM) software package.4 The size and weight metrics of our model include the lens elements, the lens assembly (i.e., the barrel or the non-transmitting material around the clear aperture, in the case of wafer-level optics), and the sensor. The cost metric is specific to the manufacturing process involved as each has its own cost model, tolerances, and constraints that affect performance and yield. Generally, the costs of the bulk material, lens forming process (e.g., machining, molding, dry or wet etching), assembly process, and anti-reflective coatings are included in our model.

By using system-level metrics together with variables in all the components, we have optimized our system so that dramatic improvements to any of the metrics (e.g., performance, size, weight) or to the balance between the metrics can be made. To demonstrate our system-level design process, we optimized an uncooled long-wavelength IR (LWIR) camera system. We were able to improve the initial probability of task performance by a factor of three. The contrast threshold function5 for the LWIR camera, before and after our optimization procedure, is shown in Figure 2. The probability of task performance metric involves integrating over the contrast threshold function, and therefore the broader response—shown in Figure 2(b)—results in a better-performing system.

Figure 2. Contrast threshold function (CTF) for a long-wavelength IR (LWIR) camera (a) before and (b) after optimization. The broader curve in (b) is indicative of increased probability of task performance.

Our overall framework allows us to change the weighting of different system-level metrics. This means, for example, that we can see the differences between a small camera, a well-performing camera, and a low-cost camera. We have built custom software with which the results of the modeling can be visualized. The software can also be used to filter the solutions, based on any of the system-level or component metrics, and allow for a comparison of the different camera solutions (see Figure 3). Our visualization software provides a common framework for both technical and non-technical users to explore the trade-offs and ultimately select the solution that is best for a specific application. 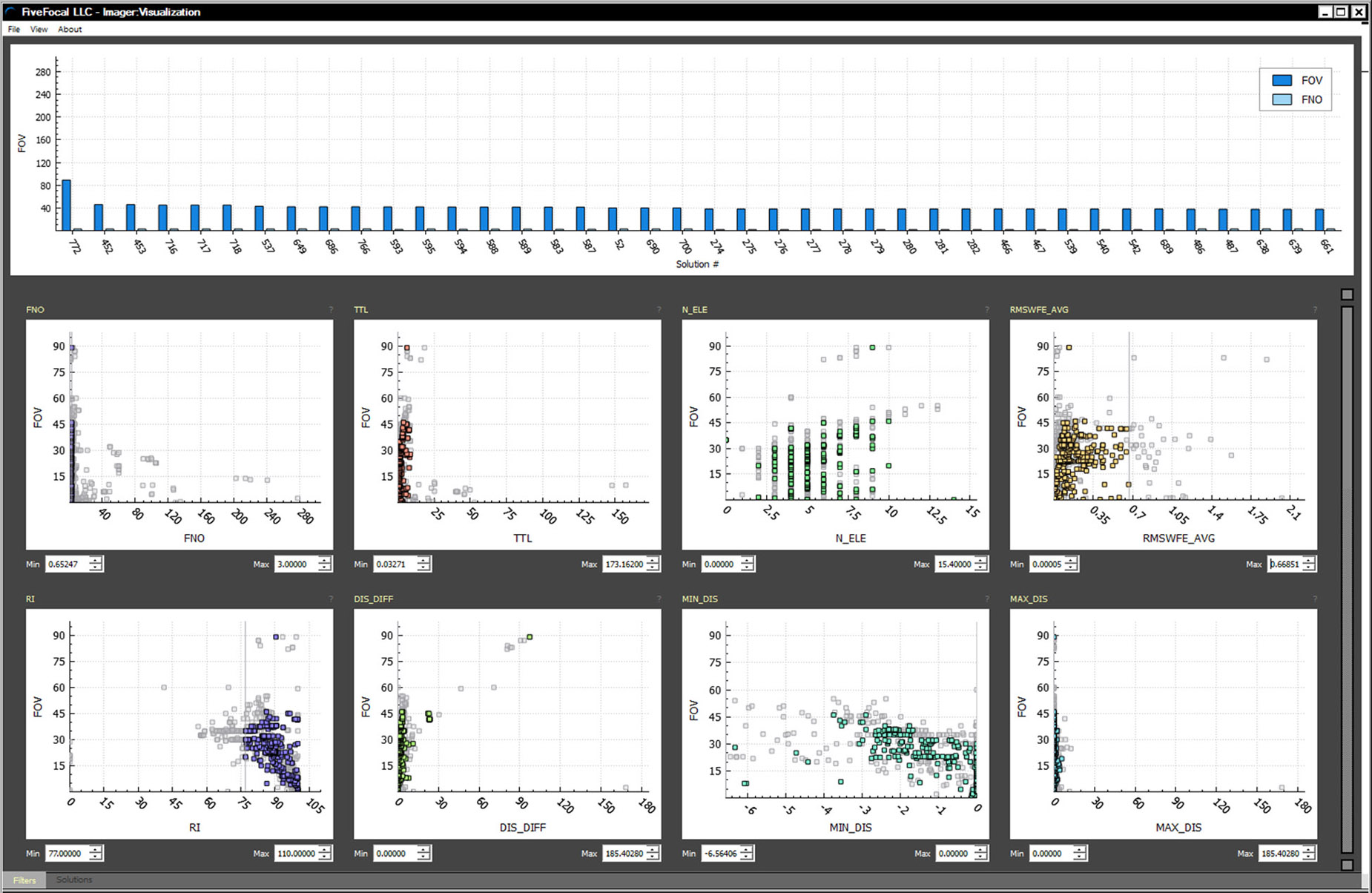 Figure 3. Example of visualization software, illustrating how multiple camera solutions can be compared and sorted. Minimum and maximum threshold values can be set for all the metrics. Cameras that do not meet the requirements are grayed-out in each of the metric plots. The solution set (top) retains only the solutions that meet all the metric limits. FOV: Field of view. FNO: F-number. TTL: Total track length. N_ELE: Number of elements. RMSWFE_AVG: Root mean square wavefront error averaged through field and spectrum. RI: Relative illumination. MIN_DIS: Minimum distortion. MAX_DIS: Maximum distortion. DIS_DIFF: Distortion difference (difference between Max_dis and Min_dis).

We have developed a new approach for optimizing the design of imaging systems. This approach, used together with the software we have built, allows many systems to be simultaneously compared, which permits non-experts to select the best system for a particular application. We now plan to implement the same system-level design framework for the design of visible spectrum systems for commercial applications.

Rob Bates is the director of optical engineering at FiveFocal. He works on system-level designs of advanced imaging systems, with an emphasis on designs for manufacture and cost, miniature imaging systems, system modeling, and system optimization. His work has been used for several systems, including endoscopes, mobile cameras, thermal imagers, and the James Webb Space Telescope. He was awarded the Shafer Cup at the 2010 International Optical Design Conference.