Graphene is attracting increasing attention from terahertz and optoelectronic device designers due to its exceptional electronic and optical properties.1 Electrons and holes in graphene have a linear energy-momentum dispersion relation with zero bandgap, resulting in peculiar features such as a negative dynamic conductivity. That negative dynamic conductivity is a ‘gain’ at terahertz frequencies under optical or electrical pumping.2–4 Such an optical gain could open the way to creating compact, room-temperature terahertz lasers, but it has to compete against strong losses in the terahertz range.4 Indeed, the maximum-available gain via interband population inversion by optical pumping is limited to 2.3%, corresponding to the absorbance of monolayer graphene.2 Here we describe new physics that can substantially increase the gain.

Graphene is a 2D material with one-atom thickness, in which collective charge density waves (called plasma waves) of 2D electrons and/or holes are excited by electromagnetic radiation. The energy of 2D plasma waves can be quantized as 2D plasmons. Graphene 2D plasmons have been intensively studied theoretically, and recently their electromagnetic response was experimentally observed.5 The group velocity of graphene 2D plasmons is on the order of 106m/s, which is two orders of magnitude lower than the speed of light. Due to this ‘slow-wave’ nature, graphene 2D plasmons mediate extraordinary light-matter interactions. When terahertz electromagnetic radiation hits the graphene surface, the 2D surface plasmons are excited. If the terahertz photons are in a transverse magnetic mode, the photons will couple with 2D plasmons. These surface plasmon polaritons (SPPs) propagate along with the in-plane component of the incident terahertz photon radiation vectors, as shown in Figure 1(b). In such a situation, the propagation of the SPPs will lead to one of two distinctive scenarios, giant loss or giant gain, depending on the polarity of the conductivity. When graphene is semi-metallic or semi-conductive with a positive conductivity value, the propagation of the SPPs can dramatically enhance the interaction between the terahertz photons and graphene, resulting in strong absorption of the incident terahertz photon energy.5 This is the case of giant loss.

Figure 1. The energy band and carrier relaxation process in graphene under IR laser pumping. The resulting population inversion and terahertz (THz) photon emission stimulated by an incident terahertz photon are shown in (a), and a schematic view of the excitation of the surface plasmon polaritons (SPPs) in (b). TM: Transverse magnetic mode. n: Substrate refractive index.

The giant gain scenario is somewhat different. Interband population inversion in graphene can be achieved via optical pumping: see Figure 1(a).2,6 The population inversion is caused by the imbalance between the ultrafast energy relaxation times of photoexcited carriers (electrons and holes) emitting optical phonons, and the relatively slow recombination times of these electrons and holes. The electrons and holes pile up around excited states whose energies form the Dirac point range in the terahertz. The negative conductivity factor of this interband population inversion can prevail over the intraband absorption (which is known as the Drude loss.) When graphene-carrier populations are inverted via optical pumping and the resultant conductivity takes negative values in the terahertz range, the propagation of the SPPs results in amplification of the incident terahertz photon energy.

We first theoretically discovered the giant gain phenomenon—see Figure 2—and now have experimentally demonstrated it.7, 8 We were surprised to see that the orders of magnitude of the gain coefficient range up to 104cm−1 over a wide terahertz range. This is more than four orders of magnitude larger than the cases where the SPPs are not excited.7 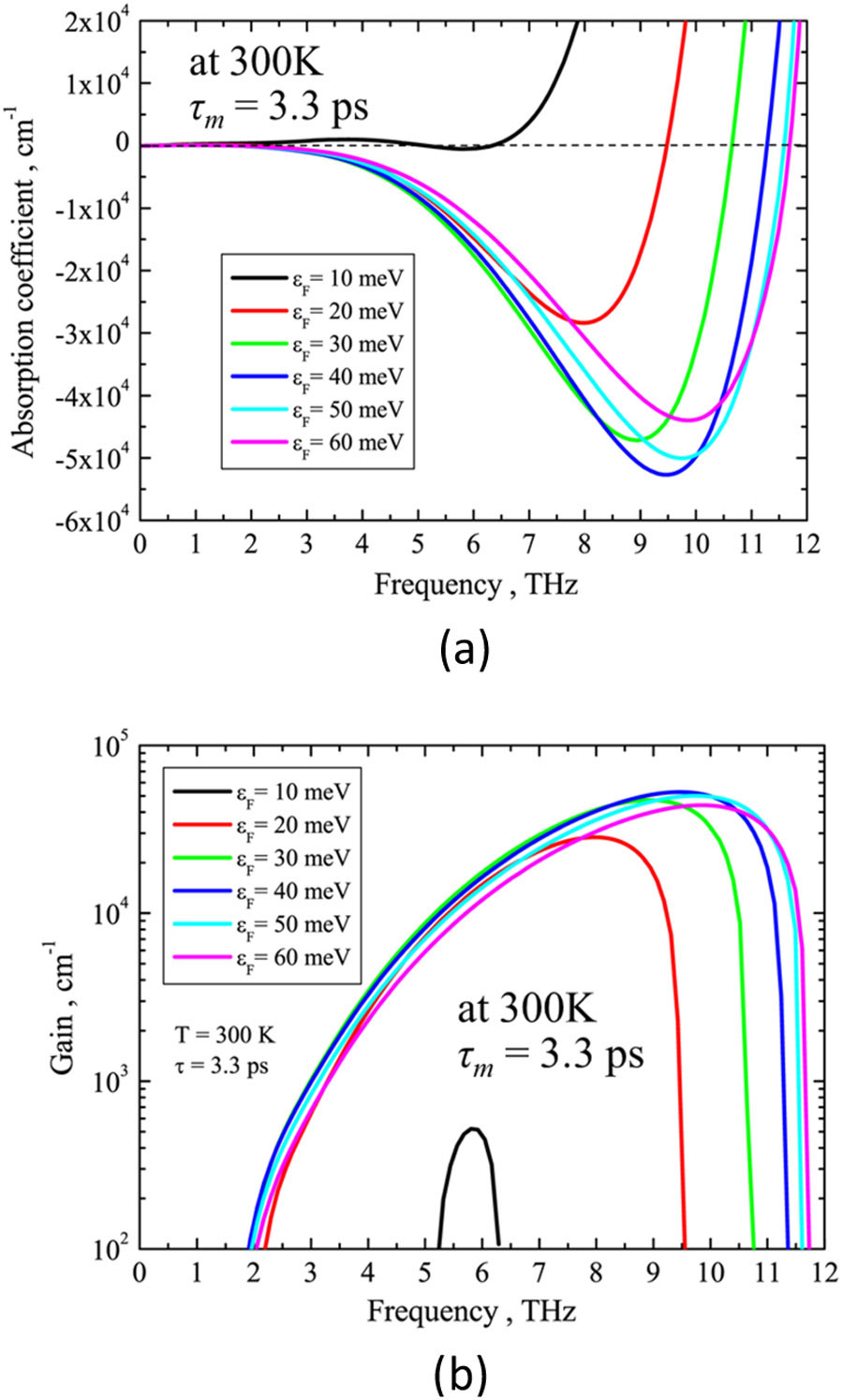 Figure 2. Simulated frequency dependence of SPP absorption (a) and gain (b) for monolayer population-inverted graphene on a 300K SiO2/Si (silicon dioxide/silicon) substrate. Each color shows the dependence for a different level of population inversion (given by the quasi-Fermi energy εF = 10, 20, 30, 40, 50, 60meV). Carrier momentum relaxation time in graphene is τm = 3 .3 ps. The results demonstrate giant terahertz gain (negative values of absorption) of the order of 104cm- 1.7

We conducted optical-pump and terahertz-probe measurements at room temperature for intrinsic monolayer graphene, which was exfoliated from graphite and transferred onto a silicon dioxide/silicon (SiO2/Si) substrate.8 The experiment is based on a time-resolved near-field reflective electro-optic sampling with a femtosecond-IR laser pulse for optical pumping and a synchronously generated terahertz pulse for probing the dynamics of the sample with terahertz photon echoes. A 140μm-thick cadmium telluride (CdTe) crystal acting as a terahertz probe pulse emitter, as well as an electro-optic sensor, was placed on an exfoliated monolayer-graphene/SiO2/Si sample (see Figure 3). 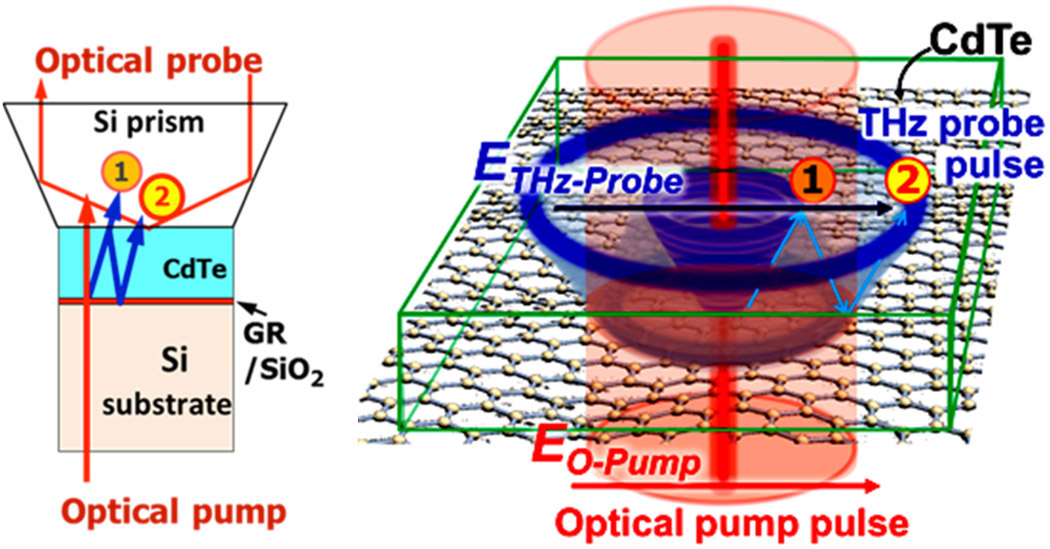 The CdTe can rectify the optical pump pulse to emit the envelope terahertz probe pulse. The emitted primary terahertz beam grows along the Cherenkov angle to be detected at the CdTe top surface as the primary pulse (‘①’ in Figure 3), and then reflects, subject to the graphene sample. When the substrate of the sample is conductive, the terahertz probe pulse again reflects back to the CdTe top surface. This is electro-optically detected as a terahertz photon echo signal (‘②’ in Figure 3). This indicates that the original temporal response consists of the first forward propagating terahertz pulse (no interaction with the graphene) followed by a photon echo signal (probing the graphene). The delay between these two pulses is given by the total round-trip propagation time of the terahertz probe pulse through the CdTe. The measured waveforms and their corresponding gain spectra (see Figure 4) are well reproduced and showed a threshold behavior against the pumping intensity as theoretically predicted.2,6

We observed the spatial distribution of the terahertz probe pulse under the linearly polarized optical pump and terahertz probe-pulse conditions. To measure the in-plane spatial distributions of the terahertz probe pulse radiation, the optical probe pulse position (at the top surface of the CdTe crystal) was changed step by step by moving the incident point of the optical pump pulse. The pumping intensity IΩ was fixed at the maximum level. Observed field distributions for the primary pulse and the secondary pulse intensity are shown in Figure 5. The primary pulse field is situated along the circumference of a circle with diameter ∼50μm, concentric to the center of optical pumping position. The secondary pulse (terahertz photon echo) field is concentrated only at a restricted area on and outside of a larger, concentric circle of diameter ∼150μm. This spot is where the incoming terahertz probe pulse produces a transverse magnetic mode capable of exciting the SPPs.7 The observed field distribution reproduces the reasonable trajectory of the terahertz echo pulse propagation in the transverse modes inside of the CdTe crystal—see Figure 3—when we assume the Cherenkov angle of 30 degrees in CdTe and the SPP propagation of ∼10μm. When the SPPs approach the edge boundary of the optically pumped area, they may mediate the terahertz emission, which is detected as the secondary terahertz probe pulse. The observed gain enhancement factor of ∼50 is in fair agreement with the theoretical calculations (see Figure 2). 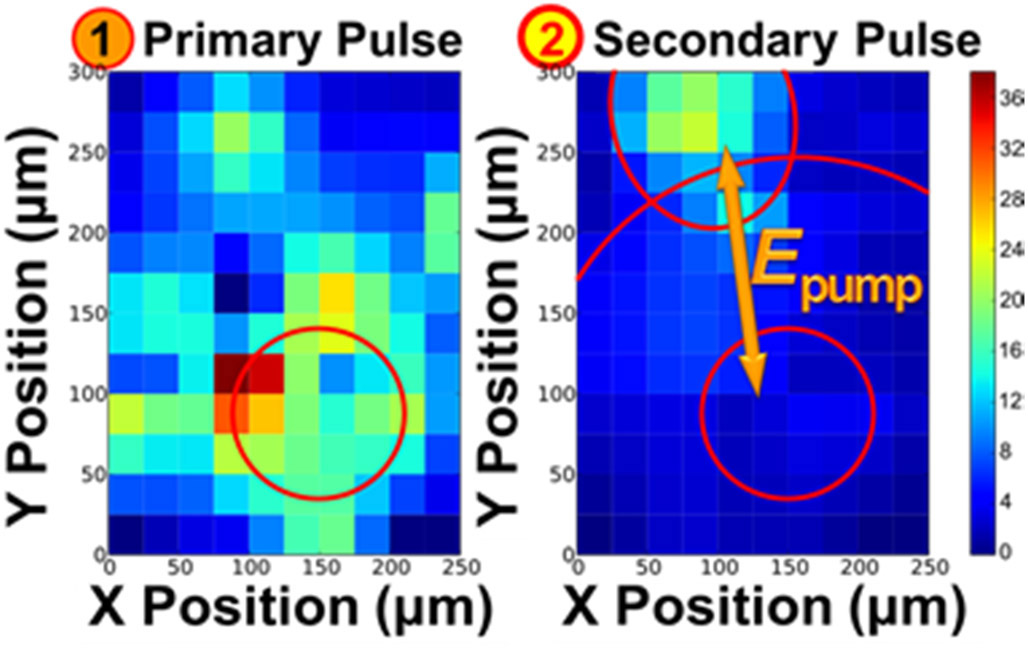 Both our theoretical and experimental results support the occurrence of the gain enhancement effect by the excitation of SPPs on terahertz-stimulated emission in optically pumped monolayer graphene. Our work now focuses on the fabrication of graphene terahertz laser chips that employ the SPP gain-enhancement mechanism. Soon we hope to employ them for terahertz lasing, using graphene at room temperature.

The authors thank T. Fukushima and T. Suemitsu of the Research Institute for Electrical Communication at Tohoku University, M. Ryzhii at the Computational Nano-Electronics Lab at the University of Aizu, and E. Sano at the Research Center for Integrated Quantum Electronics at Hokkaido University for their extensive contributions. This work is financially supported in part by JST-CREST, JSPS-GA-SPR (23000008), JSPS Core-to-Core, Japan, and NSF-PIRE-TeraNano, United States.

Taiichi Otsuji has been a professor at the Research Institute of Electrical Communication since 2005. His research interests include terahertz electronic devices/circuits/systems, plasmonic metamaterials, and novel graphene-based devices. He has authored and co-authored more than 170 peer-reviewed journal articles.

Victor Ryzhii is a professor emeritus of the University of Aizu and a visiting professor at the Research Institute of Electrical Communication. His research activities center on physics and computer modeling of low-dimensional semiconductor heterostructures and electronic, optoelectronic, and terahertz devices based on nanostructures, including graphene-based devices. He has about 300 journal publications, numerous conference papers, and 11 patents to his name.