The invention of optical fibers has revolutionized telecommunications by allowing large volumes of data—such as for telephone calls, broadband Internet, or cable TV—to be transmitted more efficiently and inexpensively. In addition, fibers have found a variety of other applications, from light illumination and imaging fiber bundles (used, e.g., in endoscopy) to fiber sensors and fiber lasers. Multimode fiber is a particular type of optical fiber with a larger core size that propagates more than one guided light mode. Recently, we proposed and demonstrated that a multimode fiber can function as a high-resolution, low-loss spectrometer.1, 2

Spectrometers are widely used tools in chemical and biological sensing, materials analysis, and light source characterization. Traditional spectrometers use a grating/prism to disperse light, and the spectral resolution (the minimum separation required to resolve two wavelengths) scales with the optical path length from the grating to the detectors, imposing a trade-off between device size and resolution. In recent years the development of ‘miniature’ spectrometers has enabled a host of new applications owing to their reduced cost and portability. However, these miniature spectrometers are still based on grating dispersion and so cannot achieve the high resolution of large bench-top spectrometers while maintaining a small footprint. Our proposed fiber spectrometer provides a means to overcome this trade-off because its spectral resolution scales with the length of the fiber, which can be coiled into a small volume. This means a compact, lightweight, and low-cost spectrometer can be obtained while maintaining high spectral resolution.

Of course, developing a spectrometer based on a multimode fiber also requires the spectrometer to operate according to a fundamentally different principle. Although grating-based spectrometers rely on one-to-one spectral-to-spatial mapping, this is not strictly required. In fact, several groups have demonstrated spectrometers based on more complex spectral-to-spatial mappings.3–6 In those implementations, a dispersive element maps different spectral bands to distinct spatial intensity profiles, or ‘speckle patterns,’ rather than to distinct positions or lines. These speckle patterns can be used as ‘fingerprints’ to identify the input wavelength. The key to achieving high resolution is to choose a dispersive element that produces different speckle patterns for small changes in wavelength.

Whereas previous researchers used random4,6,7 or disordered3 structures to produce wavelength-dependent speckle patterns, their low transmission ultimately limited the device resolution. Instead, we selected a multimode fiber as the dispersive element. Interference between the many spatial modes guided in a multimode fiber produces the wavelength-dependent speckle pattern required to build a spectrometer. Crucially, the change in wavelength required to produce a different speckle pattern scales with the length of the fiber. Moreover, fibers have low loss and can be coiled in a small volume, enabling an extremely sensitive, compact, and high-resolution spectrometer.

To illustrate the versatility of this approach, we used standard multimode fiber patch cords ranging in length from a few centimeters up to 100m.1, 2 For each fiber, we first calibrated a transmission matrix relating the input wavelength to the speckle pattern generated at the end of the fiber. After calibration, an arbitrary input spectrum could be reconstructed based on the speckle pattern it generated, through a combination of matrix inversion and non-linear optimization. Following this technique, we showed that a 1m-long multimode fiber could provide 100nm bandwidth with 0.15nm resolution (see Figure 1). To further improve the spectral resolution, we selected a 100m-long fiber that was able to resolve two lines separated by merely 1pm. The entire 100m fiber was coiled on a 3-inch spool, enabling a compact spectrometer with resolution exceeding that of large commercial grating-based spectrometers. We also demonstrated broadband operation, showing that a 4cm fiber could provide 350nm of bandwidth across the visible spectrum with 1nm resolution. Using the 4cm fiber spectrometer, we measured the photoluminescence spectrum of Rhodamine dye (see Figure 2). 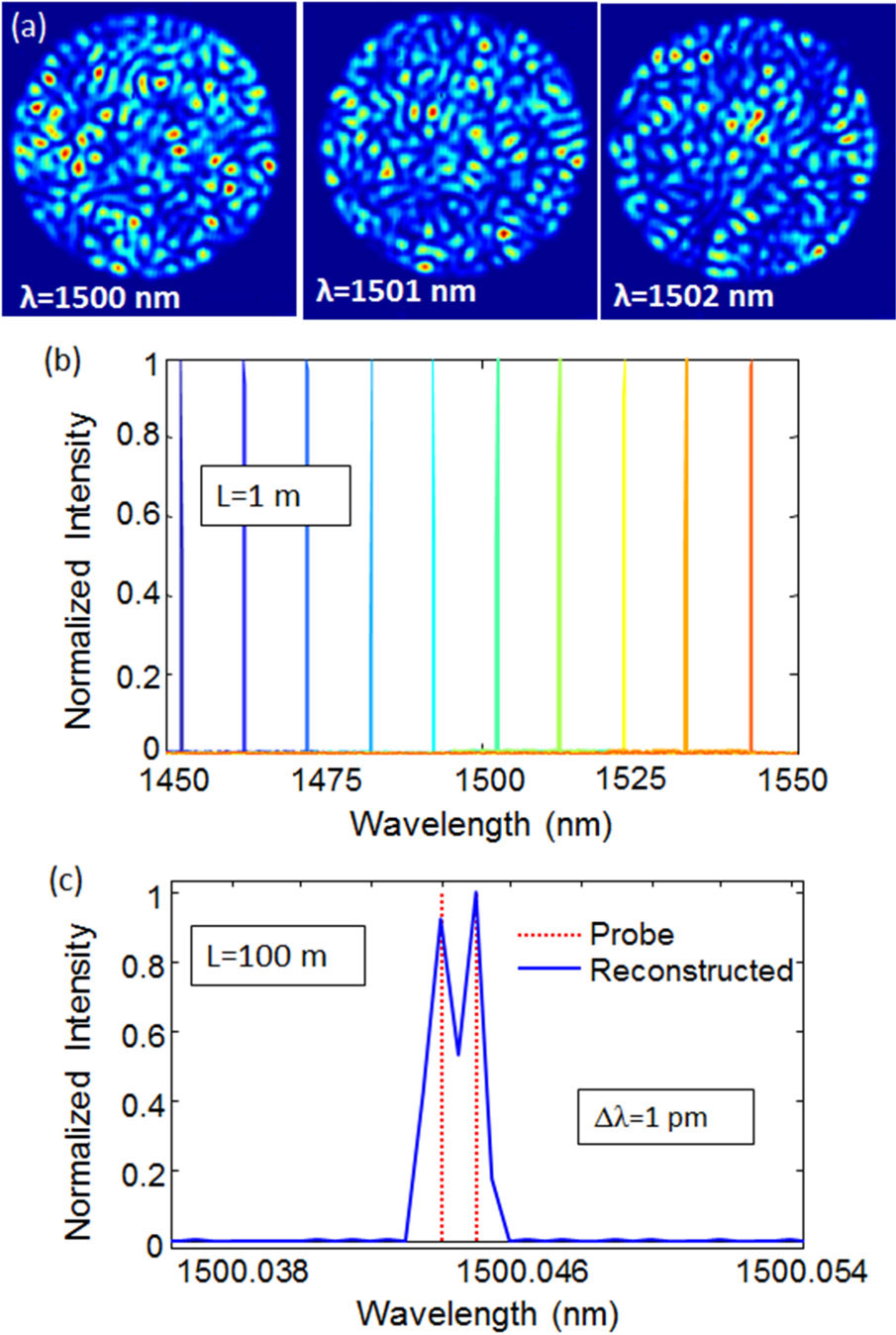 Figure 1. (a) Speckle patterns recorded at the end of a 1m-long multimode fiber (MMF) for three input wavelengths. Each speckle pattern can be used as a fingerprint to identify the input wavelength. (b) Example spectra reconstructed using a 1m-long fiber. The probe in each case is a narrow laser line. (c) A 100m-long fiber is used to reconstruct a spectrum consisting of two narrow lines (shown in red) separated by only 1pm. 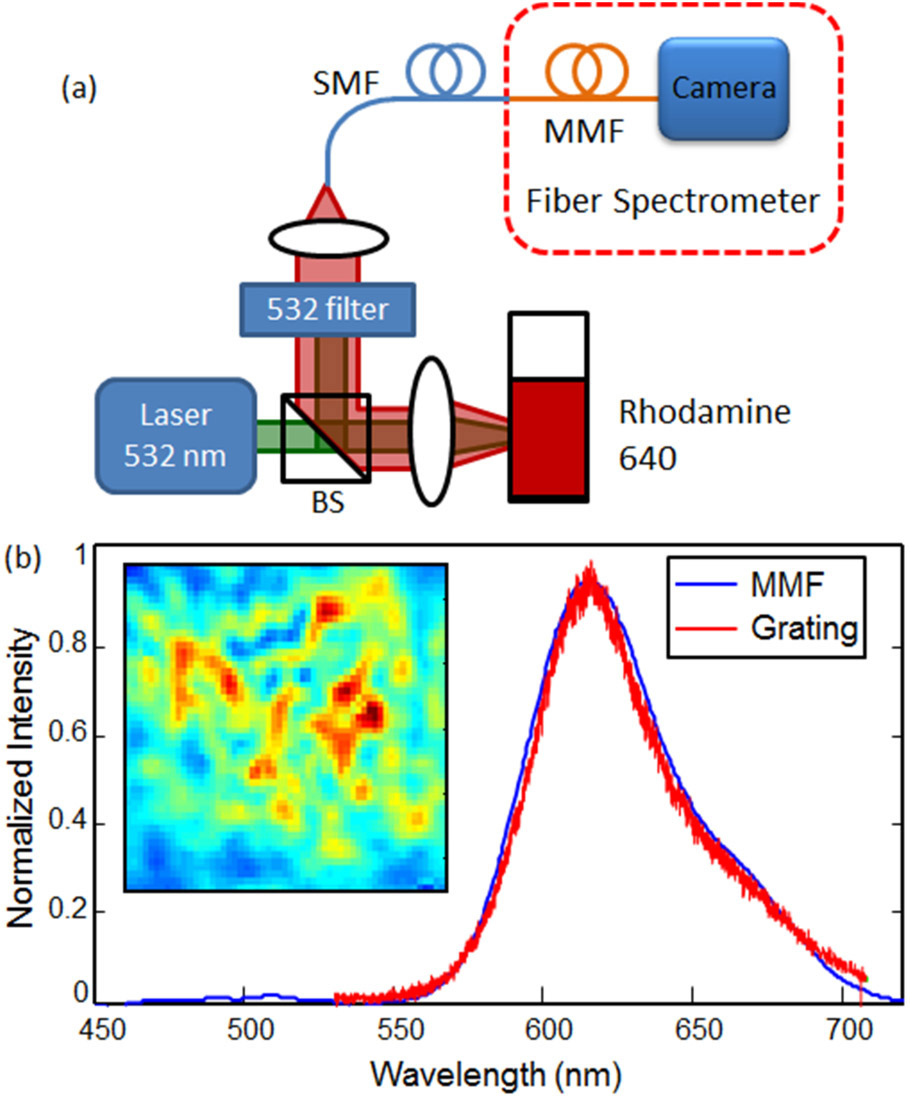 In addition to providing fine spectral resolution and broadband operation, our fiber spectrometer has low insertion loss and the signal-to-noise ratio can exceed 1000. Furthermore, the fiber can be coiled to obtain a compact, lightweight, and low-cost spectrometer that could enable a host of new spectroscopic applications. Our future work will focus on developing compact spectroscopy systems that take advantage of the unique features of the fiber spectrometer.

Brandon Redding received his PhD in electrical engineering from the University of Delaware. He is currently a research scientist.