Fiber grating sensors, which reflect light at a particular wavelength, enable measurement of high-speed events that occur over periods of a few nanoseconds or less. The ability to continuously identify the position, velocity, local pressure, and temperature of energetic materials during the early stages of detonation and the transition to full detonation would benefit high-speed impact testing (crash tests, for example) or development of rocket propellant, munitions, and demolition.

Figure 1 shows how fiber grating sensors achieve such measurements. A broadband light source illuminates a fiber grating placed in the material under test. The grating is consumed, and we can measure the decreasing reflectivity to gauge velocity and position. Figure 2 shows the result using a chirped fiber grating placed along the centerline of an energetic material prior to detonation, and the resulting data during detonation.

Figure 1. Basic block diagram of the read-out system for measuring parameters of detonation, such as velocity and position.

Figure 2. Measurement of position and velocity of a blast wave with a chirped fiber grating centered in a PBX-9502 test article (125mm in length and 25mm in diameter).

To obtain information on pressure and temperature we need a more sophisticated approach. One method is to use a side-hole optical fiber, a standard single-mode fiber and core with air holes approximately 30 microns in diameter placed symmetrically about the core. When a fiber grating is written onto the fiber and there is no pressure, the output is a single spectral peak. When pressure is applied, the spectrum splits and the result is a change in the total power reflected from the grating, which can be used to measure pressure and temperature changes. Researchers studying energetic materials have established various configurations to support these tests.

We conducted a Russian DDT test, which involves drilling a hole in a pipe and loading it with energetic material. The pipe's diameter is wide enough to contain a detonation, and the deformation of the pipe material can infer pressure at that location. Figure 3 shows the response of a side-hole fiber grating placed in a transition zone between the energetic material burning and detonating. This is commonly called the deflagration area, and it is subject to very rapid changes in pressure and temperature. Figure 3 shows that as the pressure increases, there are oscillations that cause the side-hole fiber grating spectrum to split. When the pressure increases rapidly, first one spectral peak and then the second are forced to move toward very short wavelengths, corresponding to a pressure of 850 kilopounds per square inch. As the event continues in this location, the temperature rises, forcing the peaks toward longer wavelengths. There is a sudden change that corresponds to a rapid temperature rise, forcing the first peak and then the second back toward their original wavelength and overcoming the initial induced pressure. The event continues, and when detonation occurs, the rise in pressure again forces the grating toward very short wavelengths that are beyond that of the illuminating light source.

The main advantages of this approach are the immunity to electromagnetic interference (eliminating the problems of shielding and noise) and the ability to handle very high speeds. We can detect events a few nanoseconds in length with standard systems, but higher-speed detectors can identify sub-nanosecond events. Further details are provided elsewhere.1 We have made significant progress in improving the system and the sensors that support it, allowing high-speed measurements of velocity, position, pressure, and temperature under conditions that were previously difficult or impossible to obtain.

In future work we will continue to improve the spatial and temporal resolution of the system. This will enhance our ability to provide detailed, accurate data to verify the performance of modeling high-speed events. 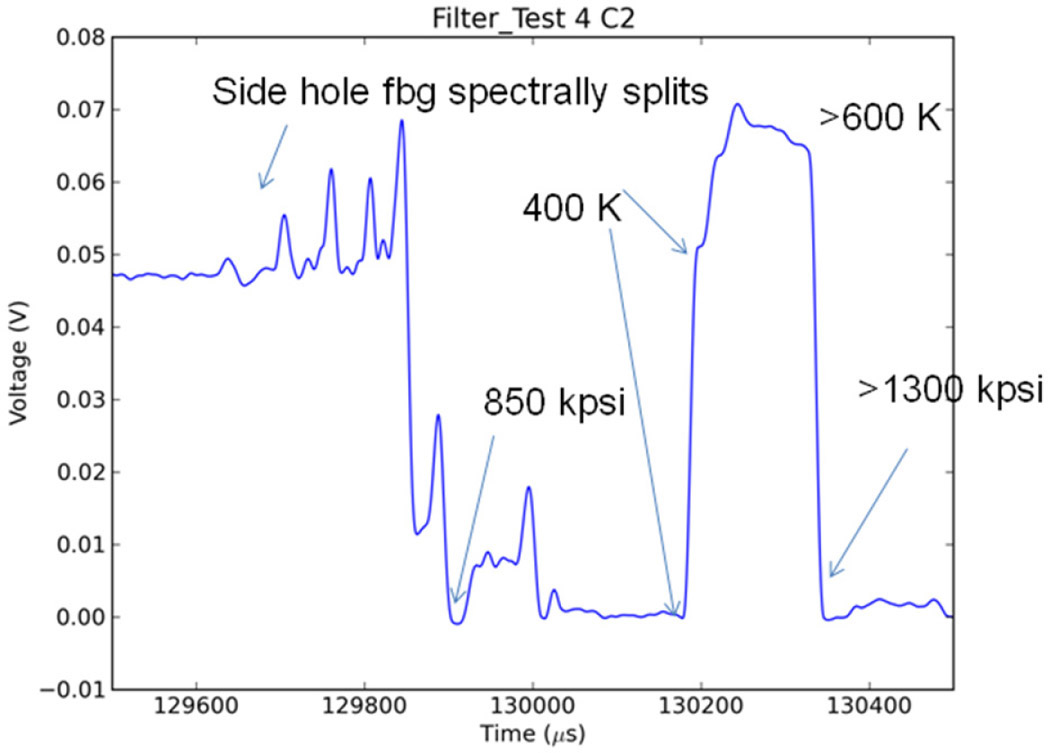