Linearly polarized light (LPL) is essential for liquid-crystal displays (LCDs), 3D visualization, and high-contrast imaging. Conventionally, LPL is generated by filtering the desired polarization from the unpolarized light of conventional light sources. However, this process results in the loss of at least 50% of the light. Therefore, a source that directly generates LPL, preferably with controllable polarization directions, is in high demand.

Current methods of generating LPL are complex, and do not enable control of polarization direction, being limited instead to only one direction. One method of overcoming this problem is to use quantum dots (QDs)—nanoscopic inclusions of one semiconductor material in another—that exhibit quantum mechanical effects. The emission properties of QDs are determined by their size and shape. However, conventional fabrication methods typically result in a high QD density (>1×106cm2), resulting in limited possibilities for controlling QD positions and emission properties. While there has been recent progress in developing methods to control these properties, the corresponding control of polarization has not been demonstrated.

In our novel approach, we explore a new type of nitride-based QD formed on top of elongated hexagonal micropyramids, which offer an effective path to generate light with controllable polarization directions.1 In addition, the positions and emission wavelengths of the QDs can be controlled within certain limits. The process is based on standard photolithography to create elongated patterns on a silicon nitride (SiN)-masked gallium nitride (GaN) template. We grew micropyramids and QDs using a metal-organic chemical vapor deposition system, with trimethyl gallium, trimethyl indium, and ammonia as precursors to provide Ga, indium (In), and nitrogen (N) atoms for the desired reactions.2 The interiors of the pyramids are composed of GaN, topped with InGaN QDs, and finally capped with a thin GaN layer. We used a continuous-wave UV laser operating at 266nm to excite the QDs, and collected and analyzed data on the QD emissions to reveal their properties and polarization directions.

The elongated patterns enabled us to define a long axis that determined the micropyramids' direction of growth, as shown in Figure 1(a) and (b). Such pre-defined elongation of the micropyramid determines the polarization direction of the emitted photons. The QDs exhibit a high probability of being well aligned with the elongation axis (up to about 90% for 1μm elongation in our investigation). The best polarization alignment is obtained for elongations parallel with the principal axes of the hexagonal crystal, that is, arranged in multiples of 60° angles with respect to each other, but polarization control in 30° steps is also possible: see Figure 1(c). 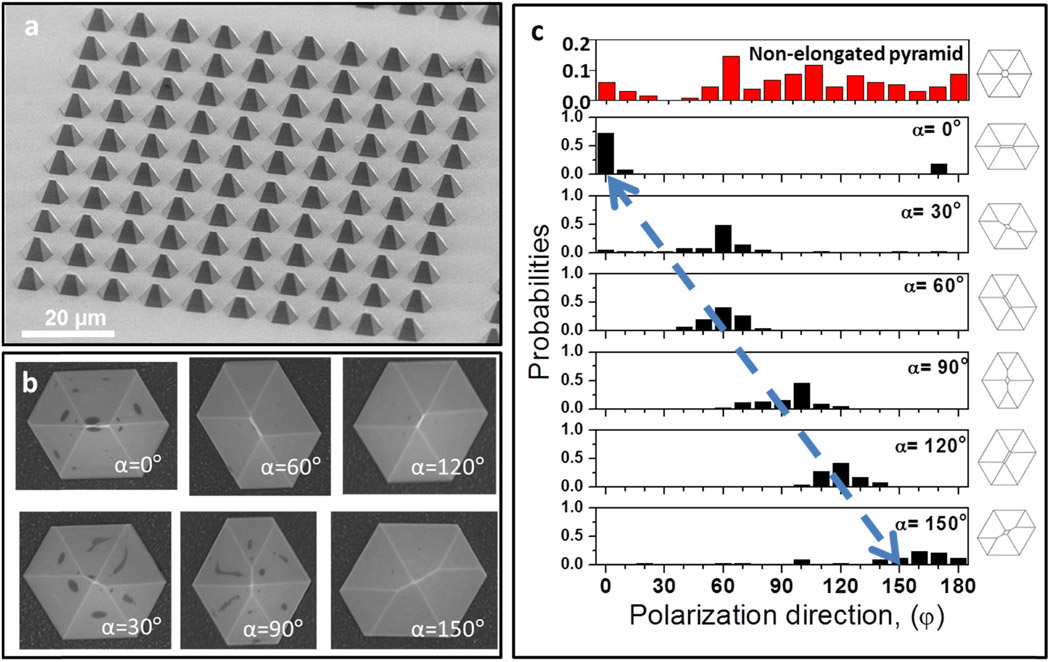 With the InGaN alloy, it is possible to tune the emission wavelengths across the entire visible spectrum toward the IR by adding more indium. Moreover, an increased indium content in the dots further improved the polarization degree of the emitted photons. According to our theoretical computations, the ‘split-off’ energy—the energy difference between the lowest and the second of the three energy states—is the crucial parameter that determines the degree of linear polarization. Given a certain asymmetry, a decreasingly smaller split-off energy will result in a successively stronger degree of linear polarization of the emission. The split-off energies of III-nitride semiconductors are about one order of magnitude smaller than in other common semiconductors, such as arsenides and phosphides. InN has the smallest split-off energy among all III-nitrides. As a direct consequence, InGaN QDs can be considered as the best candidates for generating LPL at a desired wavelength. In our present work, the emission wavelengths of the investigated QDs are between 400 and 420nm with an average degree of linear polarization of 84% in a pre-determined direction. For comparison, typical GaN QDs grown on planar substrates emit between 310 and 350nm, with ana average degree of linear polarization of less than 65% without control of the polarization direction.3

Our approach could benefit the development of more energy-efficient polarized LEDs, for example, for back illumination of LCD displays. We can generate a universal light source for various applications by combining several pyramids, individually addressed and designed for different polarization directions. In addition, our demonstrated QD approach exhibits good single-photon statistics compared with conventional light sources, offering potential for polarized single-photon emitters and quantum cryptography applications. Our ultimate goal is a scalable, electrically driven single-photon emitter with controllable polarization directions. In future work, we will seek to ensure the formation of an individual QD on top of every pyramid.

Chih-Wei Hsu recently received his PhD and is continuing his work in semiconductor materials at the Department of Physics, Chemistry, and Biology. His research interests include fabrication and characterization of III-nitride composite structures for various applications

Per Olof Holtz heads the optical characterization group at the Department of Physics, Chemistry, and Biology, of which the main focus is semiconductor-based QD and wire structures.