Unlike for traditional stereoscopic 3D display techniques, with autostereoscopic systems (e.g., integral imaging1 and holography2) viewers can observe reconstructed images without the need for special glasses. With integral imaging—first proposed by Gabriel Lippmann in 1908—a lenslet array is used to record and reconstruct the light rays coming from an illuminated 3D object. It is, however, difficult to achieve high spatial resolution and a large depth of field with a 3D integral imaging display system. This is due to the effects of the display device's pixel size and light diffraction by the lenslets. Holography can be used to create high-resolution 3D images using coherent light. In digital holography systems, digitalized interference patterns are obtained by substituting an image sensor for photographic materials. Computer-generated holograms (CGHs) can be created by digitally calculating interference patterns from 3D data. CGH techniques are most commonly applied to virtual 3D scenes, but a CGH-based method for generating real 3D scene holograms, under natural illumination conditions, is still required.

We have designed and built a new high-resolution holographic display system that uses dense ray sampling and integral imaging sensing techniques.4, 5 With our system, in which we use the integral imaging system technique to achieve high spatial resolution, we first capture multi-perspective 2D images for each object in focus. We then use an image-based rendering technique (see Figure 1) to interpolate and resample at high density the recorded rays as a set of projection images on planes near the object (dense ray sampling planes). In the next step, we multiply the projected images by a random phase distribution and transform them into a complex amplitude distribution using a Fourier transform that is based on angular spectrum theory. We then calculate the light propagation from the dense ray sampling planes to the CGH plane via 2D Fresnel diffraction. We generate the final holograms as an interference between the reference beam and the wavefront from the dense ray sampling planes.

Results from numerical reconstruction tests that we conducted are shown in Figure 2. During the integral imaging sensing process, we captured 16×16 2D images in each of the 256×256 pixels. We placed two objects—a ‘3’ and a ‘D’—at 150 and 350mm from the sensor, respectively. We captured the ‘3’ object in focus using the conventional integral imaging-based CGH, with the holographic displays set at the sensing plane. We set dense ray sampling planes at 5mm in front of both objects so that the final CGHs had 8192×8192 pixels with 2μm pixel pitch. The resulting holograms had 256×256 ray sampling points with 64μm pitch. Each point resamples 32×32 rays as projection images, using light field rendering. The wavefronts from both planes are superposed on the CGH plane to obtain the final wavefront. 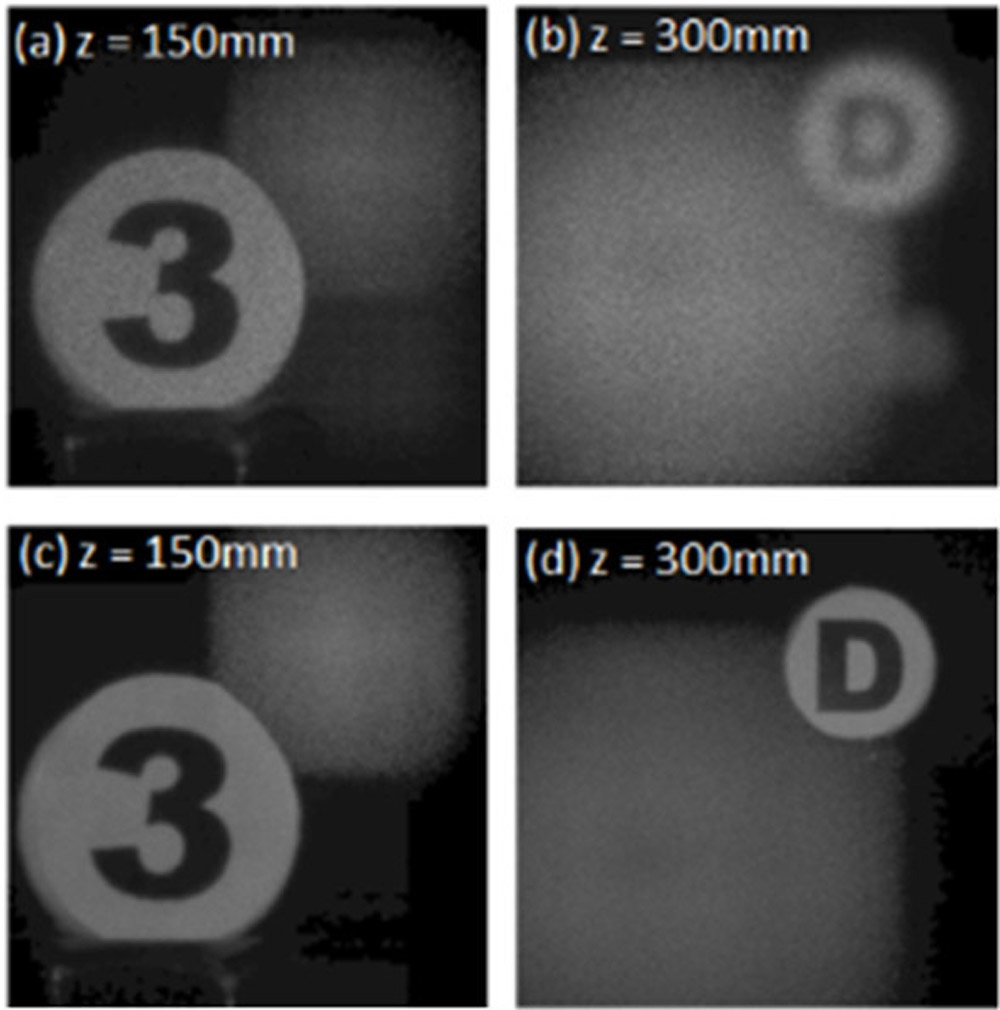 We have produced a new autostereoscopic 3D display technique, with high spatial resolution, which combines integral imaging and holography processes. For the next step in our work we will investigate how to image a scene with high spatial resolution, using one or more exposures to increase the depth of field. We will also improve the quality of the captured images by developing our deconvolution technique further.

Xiao Xiao is a PhD candidate whose research focuses on 3D imaging and displays.