The James Webb Space Telescope (JWST) will be the largest and most advanced telescope ever launched into space. Due to begin operations in 2018, it will succeed the Hubble Space Telescope as humanity's premier eye on the sky. In addition to hunting for Earth-like planets around other stars, probing the early products of the Big Bang, and investigating deep space, JWST will perform an exciting array of observations of our own solar system, filling crucial gaps in our understanding and knowledge of Earth's immediate surroundings.1, 2

Like other space telescopes, JWST's chief advantage is its location above Earth's atmosphere, so that images generated by the telescope are not subject to blurring by atmospheric turbulence. Furthermore, JWST can clearly observe IR light that is blocked at ground view by water vapor. The Hubble and other space telescopes have already used this advantage to obtain astounding pictures of Jupiter's storms and Pluto's moons, as well as of intricate galaxies and star-forming pillars of interstellar cloud.

JWST's primary mirror array will be much bigger than those of Hubble and other space telescopes, allowing it not only to see smaller objects but also to pick out much fainter details. JWST's capabilities will also extend much farther into the IR region, and its advanced spectrographic instruments will enable the use of thousands of colors to ‘fingerprint’ the chemical characteristics of its targets.

Over the past half-century, exploration of the planets with robotic spacecraft has driven a golden age of discovery. Though it will remain near Earth, JWST will further this mission with capabilities beyond those of space probes. Regarding Mars, for example, both rovers and orbiters can see only a tiny portion of the surface at any one time, though they see that ‘postage stamp’ in exquisite detail. Furthermore, rovers have a very limited ability to travel to distant parts of the globe, while orbiters have trajectories that forbid them from repeatedly visiting any one location. JWST can contribute an instantaneous global view and can monitor any location throughout the cycle of seasons, a combination that will yield detailed insight into the workings of the Martian climate.

JWST's launch will coincide with the end of a 45-year period during which at least one corner of the outer planetary region was explored at any given time. For Saturn, JWST will pick up where the Cassini spacecraft leaves off; for Jupiter, Uranus, and Neptune, JWST will take over from Hubble, which is currently our best way of seeing those planets' storms, impacts, aurorae, moons, rings, and more (see Figure 1). JWST will study astrobiological targets, such as Europa and Titan, tracers of our solar system's history, such as asteroids and comets, and ‘stand-ins’ for planets orbiting other stars, such as Jupiter and Uranus. 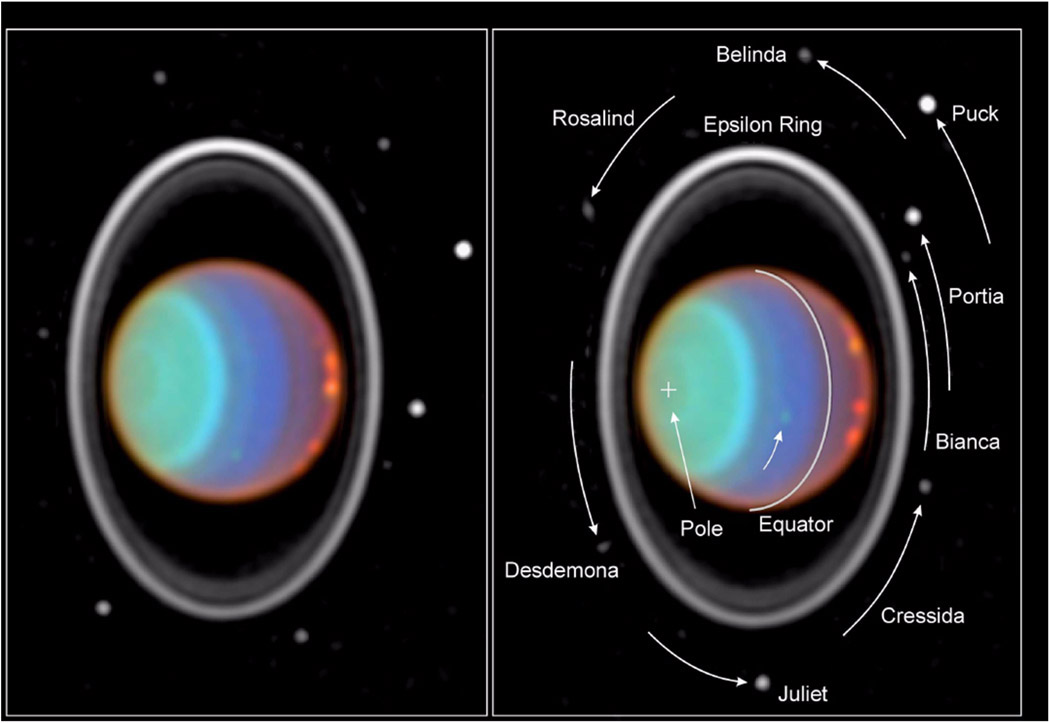 Figure 1. Two images of Uranus, as seen in IR light by the Hubble Space Telescope in 1997. In addition to the planet's rings and moons (which move from one image to the next, as indicated by the arrows), numerous atmospheric structures are visible. The James Webb Space Telescope (JWST) will obtain much sharper and more sensitive IR images of Uranus and other solar system targets. (Reproduced with permission from NASA.)

Planetary ring systems will be among JWST's many targets. Rings are the only astrophysical disks that can be studied up close, enabling us to see processes that also shape disks more distant in time or space, such as those around other stars or even the early stages of our own solar system. Ring systems, along with small moons embedded within them, can serve as detectors or tracers, their vast yet delicate structure responding sensitively to the environment and the history of their planet.

Hubble images have recently revealed new rings and moons at both Uranus and Neptune, and the configuration of these can tell a story. At Uranus, for example, moon orbits are packed too closely to be stable for billions of years, and faint rings with no visible source may be the detritus of recent collisions, combining to tell us that the system is dynamic, not static. The moons and rings that JWST might discover can also be used as diagnostic instruments. As an example, excursions in the orbit of Saturn's moon Methone, due to its being pushed around by its larger neighbor Mimas, enabled scientists to measure Mimas' mass.

The capabilities of the JWST spectrograph will yield important new insight into the chemistry of ring systems, especially those of Uranus and Neptune, which have not been investigated by a spacecraft with a capable spectrometer on board. So far, all we have are tantalizing clues that the rings of Uranus and Neptune are much less rich in water ice than are those of Saturn, but we do not know whether the abundant dark material is primarily silicate rock or carbonaceous soot. Taking the chemical fingerprints of the rings may help us to understand why Saturn has its broad glorious disk while Uranus and Neptune have only a few sharp narrow rings, and may even serve as tracers for the origins of the outer planets themselves.

Finally, JWST will continue to monitor aspects of ring systems that are known or suspected to change. These include the shifting and eroding arcs in Neptune's rings and the seasonally varying spokes in Saturn's (see Figure 2). By watching these processes continue to play out, we can piece together the balancing of gravity, magnetism, impact bombardment, and other factors that cause them. 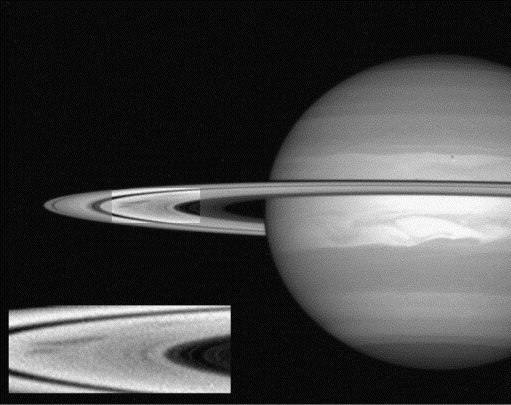 Figure 2. The ghostly radial markings known as spokes, shown in the highlighted portion of this 1996 Hubble image of Saturn and its rings, trace the interplay of interplanetary impacts and magnetic forces in the rings. The JWST will continue to track the seasonal behavior of spokes after the end of the Cassini spacecraft mission.

In preparation for JWST's launch, NASA engineers will continue to complete the assembly and testing of the spacecraft's systems, while developers are engaging with the larger science community to anticipate the ways JWST will be used, and to ensure that its hardware and software can perform those tasks. One of JWST's limitations is that it will not be able to observe Mercury or Venus because these planets move too fast and are too close to the Sun for the system's sensitive IR detectors to tolerate.

Whether you are interested in our origins, the possibility of life elsewhere, or just our planetary environment for its own sake, the powerful capabilities of JWST will be crucial for advancing understanding of our solar system.

Matthew Tiscareno is a planetary researcher at Cornell University. He is a participating scientist with the Cassini mission, which is currently in orbit around Saturn. He studies the dynamics of satellite systems and disk systems, including planetary rings.