Saving the sunshine for night: solar fuels from artificial photosynthesis

Global energy demand is increasing, and meeting it in a sustainable, economical, and environmentally benign way means moving beyond fossil fuels. The sun is a ubiquitous energy source, providing more energy in one hour than the world uses in a year. However, the energy from the sun is relatively weak, and it disappears at night. Huge collection areas are required, and to be practical at the scale needed, the energy has to be stored.

Our work has the goal of converting solar energy into fuels, which is hardly a new concept.1, 2 Plants and micro-organisms have been converting solar energy into fuel by reducing water to hydrogen or carbon dioxide (CO2) to carbohydrates for billions of years in a process called photosynthesis. Inspired by the natural process, we adopted an ‘artificial photosynthesis’ approach based on dye-sensitized photoelectrosynthesis cells (DSPECs). The ultimate goal is a tandem cell, splitting the solar input to drive water oxidation at a ‘photoanode’ and CO2 reduction to formic acid or syngas—hydrogen:carbon monoxide (H2:CO) mixtures—at a ‘photocathode.’

At the heart of the current DSPEC for water splitting is a molecular assembly made up of a light absorber (chromophore) and catalyst for water oxidation: see Figure 1. The assembly is attached to a thin layer of the semiconductor titanium dioxide (TiO2). The TiO2 is deposited on a mesoporous film of transparent conducting oxide nanoparticles such as indium oxide doped with tin (nanoITO). Light absorbed by the chromophore generates an excited state that undergoes electron injection into the TiO2. The injected electron is transferred to a second electrode, the cathode, through an external circuit for H2 production. The electron lost by the chromophore is replaced by electron transfer from the catalyst, beginning the process of activation and water oxidation catalysis. The excitation/injection/electron transfer cycle needs to be repeated three more times to activate the catalyst toward water oxidation to oxygen (O2). Protons released when water is oxidized transfer through a membrane to the photocathode, where they are reduced to hydrogen. 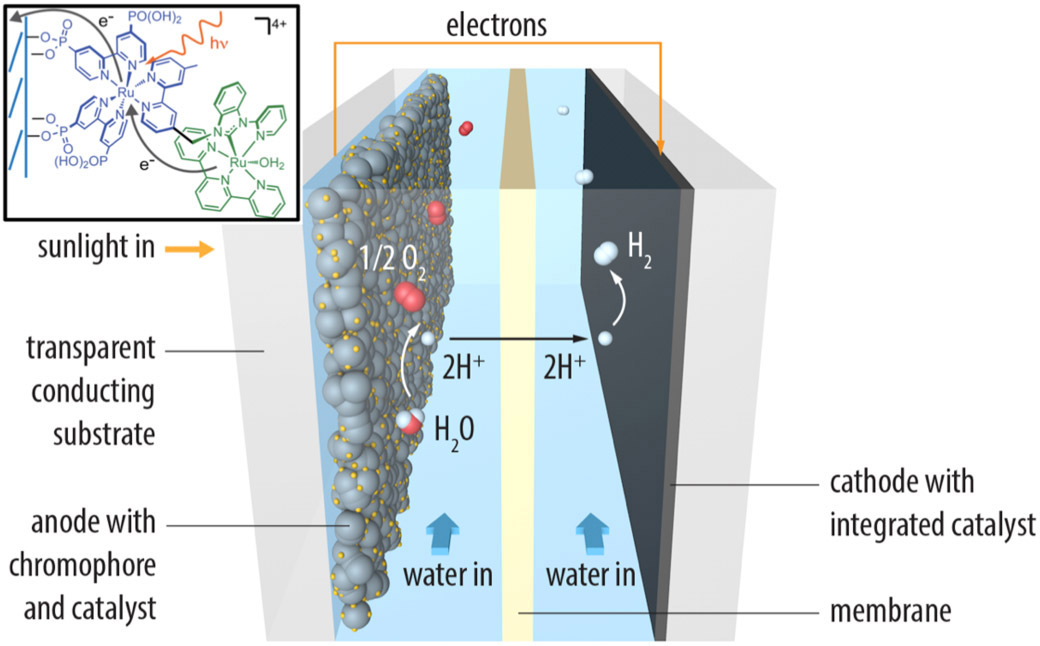 Two nagging problems have inhibited the practical application of DSPECs. The phosphonate surface link shown in Figure 1 is only stable in acidic solution (pH<4) because, at higher pH, the surface bonds are broken and they are hydro- lyzed from the surface. This is true even though stability at higher pHs is desirable for water oxidation because rates are increased. In a normal nanoparticle cell with TiO2 as the semiconductor, a second problem arises from the 5–10 micron film thickness. Injected electrons take too long to travel through the nanoparticles to the conducting oxide. Instead they drift back to the surface where they transfer back to the oxidized catalyst in the assembly, undoing the light absorption/activation process.

In collaboration with Greg Parsons and his group at North Carolina Sate University, we have found that atomic layer deposition (ALD) can solve both these problems.3, 4 In the ALD technique, reactive gases are flowed over a surface where they are hydrolyzed to form thin layers of a surface oxide. Layer-by-layer deposition results in stepwise buildup of multiple oxide layers on the surface.

For stable catalyst binding on the surface of conducting nanoITO electrodes, we first bind the catalyst to the surface and then stabilize it by ALD of a TiO2 overlayer to prevent hydrolysis.3 Electrochemical studies revealed that the stabilized catalyst underwent water oxidation catalysis at pH=1–12 with a reactivity enhancement of up to 106 at pH 12!3

The prohibitive thickness of the TiO2 nanoparticles was overcome by ALD another way, by forming ‘core/shell’ structures with a thin layer of TiO2 added on the outside of the nanoparticles in mesoscopic films of nanoITO.4 In this structure, the core consists of a film of 20–40nm nanoparticles of nanoITO and the TiO2 shell, an external, conformal TiO2 layer of thickness ∼3.6nm, about three orders of magnitude thinner than the core. The molecular chromophore-catalyst assembly shown in Figure 1 was then tethered to the TiO2 surface, and a DSPEC was constructed by connecting the core/shell-assembly photoanode to a platinum (Pt) cathode. Excitation and injection occur as before, but in the core/shell structure, the electron is quickly transferred to the conducting oxide for transfer to the cathode. Upon illumination with visible light, H2 production occurs at the Pt cathode and O2 at the photoanode with an absorbed photon conversion efficiency of 4.4% for water splitting.

The combination of chromophore-catalyst assembly, core/shell structure, and DSPEC design opens a new door to artificial photosynthesis. Immediate targets for our future research are enhanced solar efficiencies, long-term stability, and tandem cells for producing oxygen and reducing CO2 to formate or syngas. The essential pieces are in place. Time will tell, but initial results are encouraging, with real promise for scale-up and continued development. Stay tuned… .

This research is wholly supported as part of the University of North Carolina's Center for Solar Fuels, an Energy Frontier Research Center funded by the US Department of Energy, Office of Science, Office of Basic Energy Sciences under award DE-SC0001011.

Thomas J. Meyer designed the first molecular water catalyst, first described proton-coupled electron transfer, and was an early pioneer in the field of artificial photosynthesis and solar fuels. He is currently Arey Professor of Chemistry at UNC and director of the UNC EFRC.

Ralph L. House is a research associate specializing in the use of multiple spectroscopic techniques to analyze the steps leading to the generation of solar fuels. Ralph also leads the construction of an electrochemical bioreactor and is the UNC EFRC liaison for external outreach and collaboration.