Concern about salmonid (salmon and related fish) populations has led the US government to legislate for hydropower dams to be configured and operated to maximize the salmonids' survival rate.1 For hydropower dams in the Federal Columbia River Power System (FCRPS) located on the mainstem Columbia and Snake Rivers, the US Army Corps of Engineers, Portland District, Oregon, developed a monitoring system. The juvenile salmon acoustic telemetry system (JSATS)2–4 accurately estimates the survival and observes the behavior of juvenile salmonids passing through the dams.5, 6 However, the acoustic microtransmitters used to date require a tag to be surgically implanted in the test fish: see Figure 1(a). Although the size of the current transmitter can be safely surgically implanted in most yearling Chinook salmon, a smaller transmitter would be better for the fish. In addition, the current transmitter is too large for smaller juvenile Chinook salmon, particularly those found in the lower Columbia River and estuary downstream of Bonneville Dam.

We have designed and tested a prototype and manufactured a new-generation high-performance JSATS transmitter that can be injected rather than surgically implanted. Injecting the microtransmitter significantly reduces implantation time, fish handling during tagging, the health impacts on tagged fish, and tagging costs. The volume and weight of the transmitter battery are key to downsizing the transmitter: see Figure 1(b).

Early versions of the JSATS acoustic transmitters included two 1.55V silver oxide button cells (SR416), each weighing 130mg. Together, the batteries accounted for about 60% of the total weight of the transmitter. The current version of the JSATS transmitter—manufactured by Advanced Telemetry Systems, MN—contains only one SR416 button cell battery, but the battery is still a major portion of the total transmitter weight. In addition, the flattened cylindrical shape of the button cell means it cannot be injected. To improve the energy density, we designed a custom battery.

We based our cell on lithium/carbon fluoride (Li/CFx) chemistry rather than the current silver oxide chemistry because it offers high energy density, high average operating voltage, long shelf life, and wide operating temperature range.8, 9 Theoretically, carbon monofluoride (CFx with x=1) has a high capacity of 864mAh/g.10 Its practical energy density reaches up to 650Wh/kg in an envelope cell design.8 However, there are a few challenges in Li/CFx-based microbattery design. First, there is a large increase in internal resistance when the battery size is reduced. Second, parasitic weight contribution in the system increases when the cell becomes smaller. Finally, the low electric conductivity of CFx gives rise to a voltage delay and strong polarization at high current density. All of these factors reduce the energy density of CFx microbatteries.

To address these challenges, we developed lamination and fabrication processes to fabricate cylindrical CFx-based microbatteries (MB306). The complete technology is now ready for mass production.7 The two generations of batteries used to power acoustic microtransmitters are compared in Figure 2. One very important improvement is that the 3mm-diameter cylindrical shape of the MB306 battery enables injection into small juvenile salmon. Second, the energy density of the MB306 battery is at least 222Wh/kg, higher than that of SR416 batteries. The volume of the MB306 batteries is 0.042cm3, almost one-third smaller than the 0.058cm3 of SR416 batteries, further reducing the burden on juvenile salmon or other species implanted with the transmitter. Figure 3 shows the internal structure of MB306 batteries, the component weight distribution, and the manufacturing process. Sealant and packaging materials account for more than 40% of the total weight and will be further reduced in future designs. Between late June and early July 2013, we manufactured 700 microtransmitters powered by MB306 batteries and successfully injected them into juvenile Chinook salmon released in the Snake River of Washington State for field evaluation. Signals were successfully received with high efficiency at every detection array downstream of release within the travel times expected. We were able to collect valuable data on the behavior and survival of the juvenile Chinook salmon as they migrated through the FCRPS. 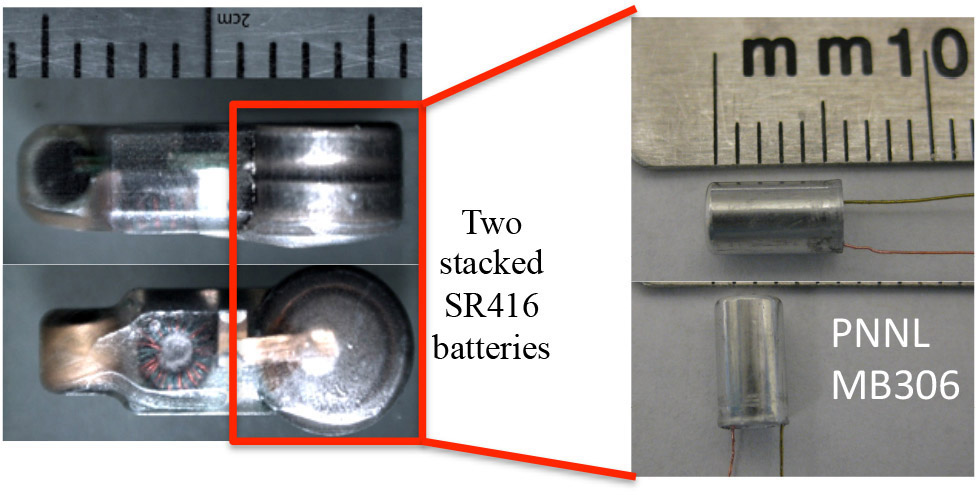 Figure 2. Comparison of microbatteries. The SR416 button cells that powered the old version of microtransmitters can be replaced by the MB306 developed at Pacific Northwest National Laboratory (PNNL). The version of the JSATS transmitter currently in commercial production by Advanced Telemetry Systems, MN, needs only one SR416 button cell battery.7 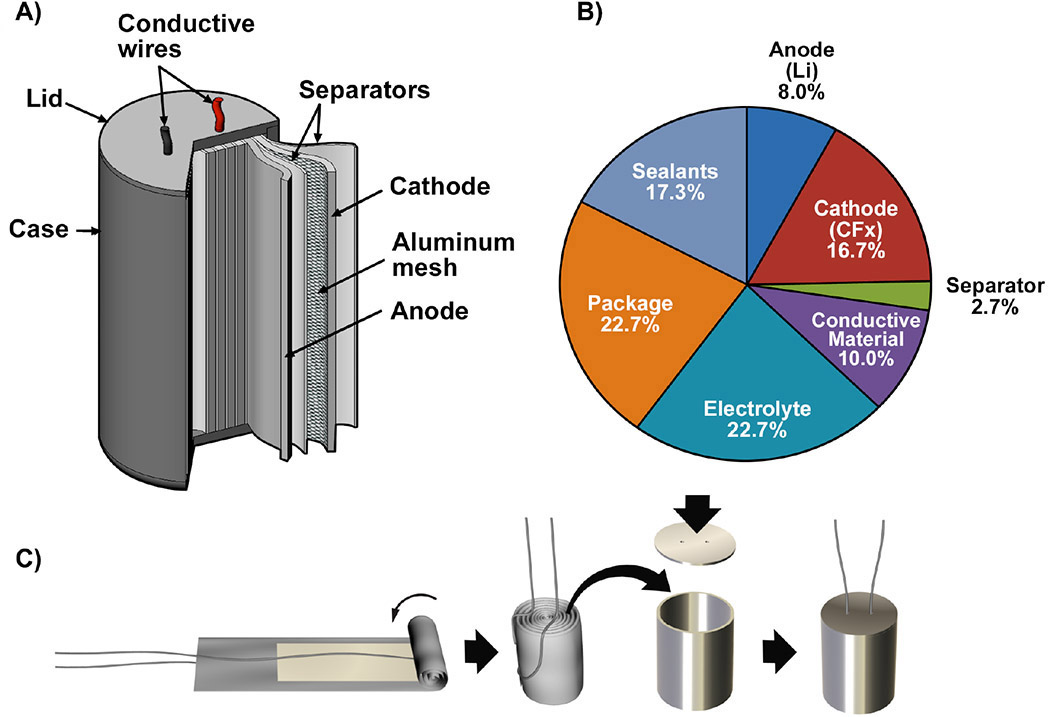 The type of microbatteries characterized by the MB306 may have a large potential market in the near future in different applications of microdevices including various sensor packages and medical devices. In the MB306, gravimetric and volumetric energy densities have been remarkably improved, satisfying all requirements for powering JSATS transmitters while reducing volume and weight. The newly designed microbatteries intrinsically have much lower impedance than SR316 button cells, which leads to significantly improved electrochemical performance over a wide temperature range.7 The microbattery was a major factor in the design of the new injectable acoustic microtransmitter. It will reduce costs while providing additional biological benefits for the tagged fish and information for the development of fish-friendly hydrosystems internationally. We are now using the knowledge gained from this project to develop novel microbattery designs for other practical applications.

The authors would like to thank the US Army Corps of Engineers, Portland District, for financial support.

Jie Xiao is a senior scientist. Her research interests span materials synthesis, electrochemical catalysis, and advanced characterization techniques, with the goal of identifying new materials and novel technologies for energy storage and conversion.

Z. Daniel Deng is a chief scientist. He is active in the development and application of experimental and numerical modeling tools for conventional hydropower and marine and hydrokinetic renewable energy systems.

Thomas J. Carlson is a retired program manager who remains active in the development and application of passive and active acoustic devices and other aspects of assessment of the impacts of hydropower, offshore renewable energy, and oil and gas production on aquatic systems.