Laser-based spectroscopic sensing is now widely used in a variety of field applications such as environmental monitoring. The most suitable light source is quantum cascade lasers (QCLs), which emit a high-output optical power with a very narrow linewidth in the spectral range from mid-IR (MIR) to terahertz (THz). For spectroscopic sensing applications, the laser emission frequency must be tuned to the specific frequency at which target molecules and ions absorb light. MIR QCLs are easy to tune by controlling the device temperature, which changes the effective refractive index. In contrast, temperature has little effect on the refractive index of THz QCLs, which cannot be tuned in the same way.1

We have developed a novel technique to tune THz QCLs.2 Our device is based on a three-terminal configuration consisting of two layered sections: a THz QCL based on gallium arsenide (target frequency: 4.7THz) and a pseudomorphic high-electron-mobility transistor (PHEMT) with an indium gallium arsenide (InGaAs) single quantum well (QW) electron channel, where the carrier density in the electron channel is modulated by applying voltage to the buried contact and the PHEMT electron channel (see Figure 1).3 The buried contact is integrated into the laser waveguide (through which the emitted laser light travels). This varies the effective refractive index of the single surface plasmon waveguide,4 shifting the laser emission frequency. 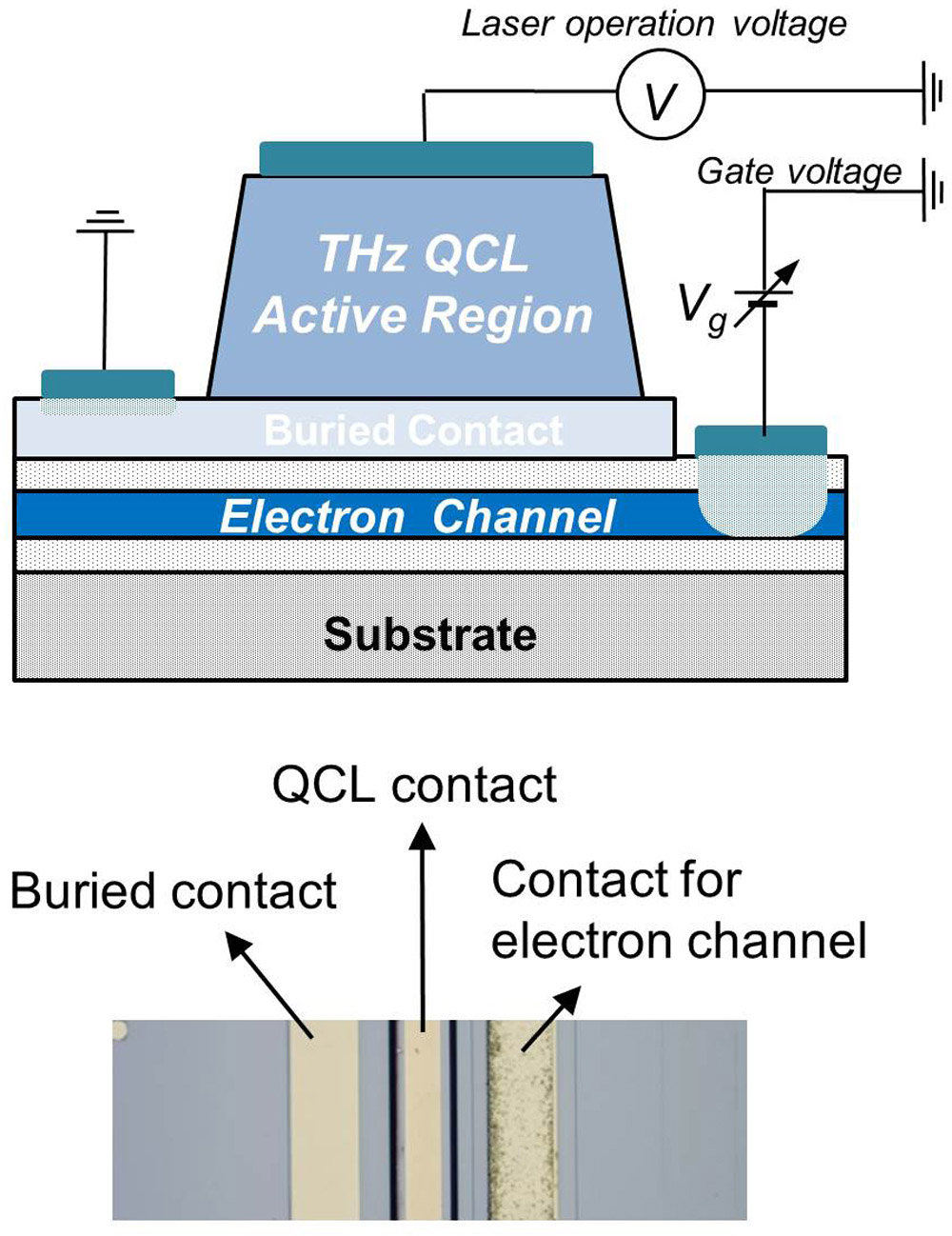 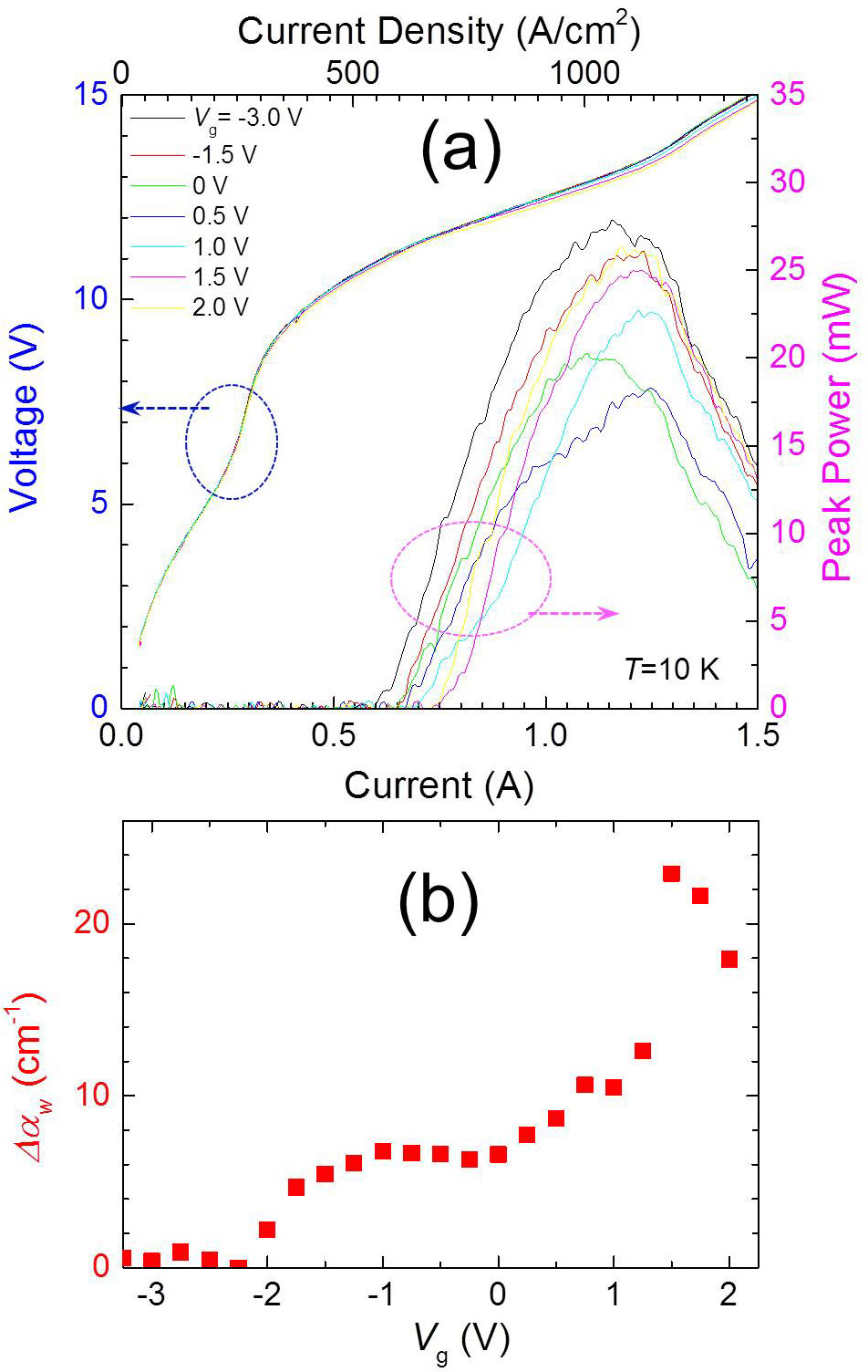 Figure 2. (a) Current-voltage-light output power (I-V-L) characteristics of the GaAs THz QCL section (78μm-wide and 1.4mm-long ridge) as a function of Vg. Current pulses of 100ns width at a duty cycle of 1% were used. (b) Waveguide loss changes (Δαw) as a function of Vg. We observed a significant increase of Jth (28%) and Δαw when Vg was increased from −3 to 2V.

Figure 2(a) shows laser operation current-voltage-light output power (I-V-L) characteristics as a function of gate voltage (Vg). The threshold current density (Jth) increased with Vg from −3 to 2V although the I-V curves almost remained unchanged. We interpret the increase of Jth with Vg as indicating increased absorption in the waveguide due to electron accumulation in the InGaAs channel by Vg. The filled squares in Figure 2(b) represent the computed waveguide loss changes (Δαw) as a function of Vg. Δαw was estimated using an experimentally obtained QCL gain coefficient and a computed loss by facet reflection (mirror loss). We found that the change in waveguide loss Δαw is modulated by more than 20cm−1 as a function of Vg.

Figure 3. (a) Vg dependence of one dominating laser cavity mode. We observed a similar Vg dependence even though the laser operation condition is changed. The maximum frequency shift was about 2GHz. (b) Converted refractive index change Δneff as a function of Vg. The observed change in neff by Vg is qualitatively interpreted by the large dispersion of the intersub-band transition in the electron channel.

Figure 3(a) shows the evolution of one dominating laser cavity mode at the heat sink temperature of 10K as a function of gate voltage Vg. The laser cavity mode first shows a blue shift (shift to a higher wavenumber) as Vg increases from −2.5to 0V, whereas a red shift (i.e., to a lower wavenumber) is observed in a positive gate bias Vg from 0 to 1.5V. In this range of Vg, the maximum frequency shift is about 2GHz. The same qualitative gate dependence of the spectrum is observed at the different laser operation voltages. Figure 3(b) depicts the converted refractive index change (Δneff) from the observed frequency shift. Δneff first decreases when Vg increases from −2.25 to 0V and then starts to increase with positive Vg. Analysis showed that the Δneff dependence on n results from a refractive index change induced by the/an intersub-band optical transition in the electron channel. Both the energy shift of the intersub-band transition energy by the electric field and the electron accumulation/depletion in the electron channel play a crucial role in determining Δneff.

An interesting feature of this device is the ability to perform frequency modulation for communication with a higher signal-to-noise ratio compared with amplitude modulation. We achieved the same output power with different laser emission frequencies at certain laser operating conditions by simultaneously varying Vg and the drive current J. As an example, the laser emission frequency is linearly reduced by ≈2GHz when Vg increases from 0.5 to 1.5V and the same output power is delivered if J is modulated. Thus, in principle, it would be possible to produce pure frequency modulation by modulating J and Vg simultaneously.

In summary, electrical tuning of laser frequency is a promising technique that is easy to integrate into practical device structures. In addition, PHEMT detects internal light, which is useful for stabilizing optical output power. Our next step is to apply this scheme to a double metal waveguide exhibiting better temperature performance.5 Its large confinement factor is expected to provide a larger tuning range.