Conventional optical microscopes can resolve objects no smaller than about 300nm, a restriction known as the ‘diffraction limit,’ defined as approximately half the wavelength of light being used to view the specimen. However, researchers want to view subcellular structures, as well as synthetic nanostructures such as carbon nanotubes, which are a few nanometers in diameter.

Many approaches for breaking the diffraction limit have been proposed.1–5 However, they generally require fluorescence labeling, which itself perturbs the system under investigation. We recently developed a new approach, named saturated transient absorption microscopy (STAM), to view the nanoscopic world without labeling.6 With this method, we can see the signal directly from the target nanostructures or molecules rather than from the labels.

The principle of STAM is to create an effective focal area that is much smaller than the diffraction limit by playing with the electronic states of the target nanostructure or molecule. To achieve this, three laser beams, including a doughnut-shaped laser beam (the saturation beam) that selectively illuminates the peripheral area but not the very central area, are collinearly aligned (see Figure 1). Electrons illuminated by the doughnut-shaped laser beam are kicked temporarily into a higher energy level and are said to be excited, while the others (at the very center) remain in their ground state. When the doughnut-shaped beam is strong enough, the ‘excited state’ is fully filled (saturated) and no more molecules can be kicked up to it. The signals are generated using the other two lasers, called pump and probe. The ‘pump-probe’ signal can only come from the molecules in the ground state, not the ones in the saturated state at the very center of the doughnut-shaped beam. In this way, the effective focal size of this system can be significantly reduced, thus reaching subdiffraction-limit resolution.

Figure 1. Principle of saturated transient absorption microscopy (STAM). The effective focal area is decreased because the pump-probe signal can only be generated at the center region where the excited state is not saturated.

Using this principle, we have constructed a STAM system (see Figure 2).6 Briefly, a 1064nm beam was split into the pump and saturation beams, with an 830nm beam collinearly aligned with them. We employed a phase-only spatial light modulator to generate a helical phase pattern with a 0–2π continuous phase gradient around 360° (see Figure 2). With a Gaussian incident beam, the wave front of the reflected output from the phase pattern was engineered with spatial phase delay, resulting in the doughnut-shaped beam. 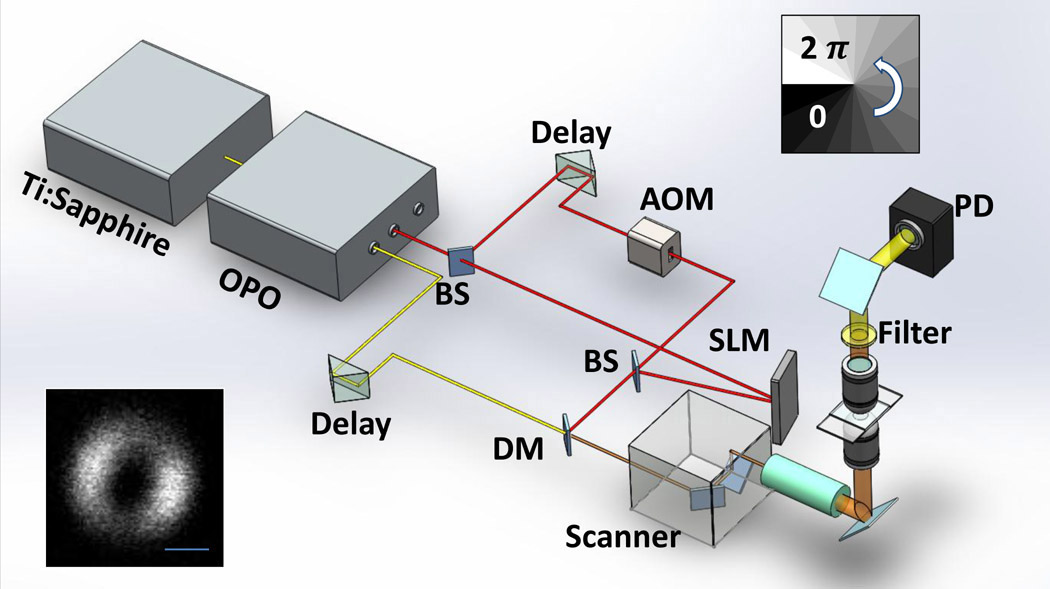 Applying this STAM system, we have imaged graphite nanoplatelets to demonstrate its ability to break the diffraction limit. Nanoplatelets that cannot be resolved by a conventional pump-probe are resolved by STAM (see Figure 3). Moreover, we have imaged a small single nanostructure to measure the spatial resolution of our microscope system. With a de-convolution analysis, we confirmed that a spatial resolution of λ/4 (∼200nm) was achieved, where λ is the wavelength of the incident light. 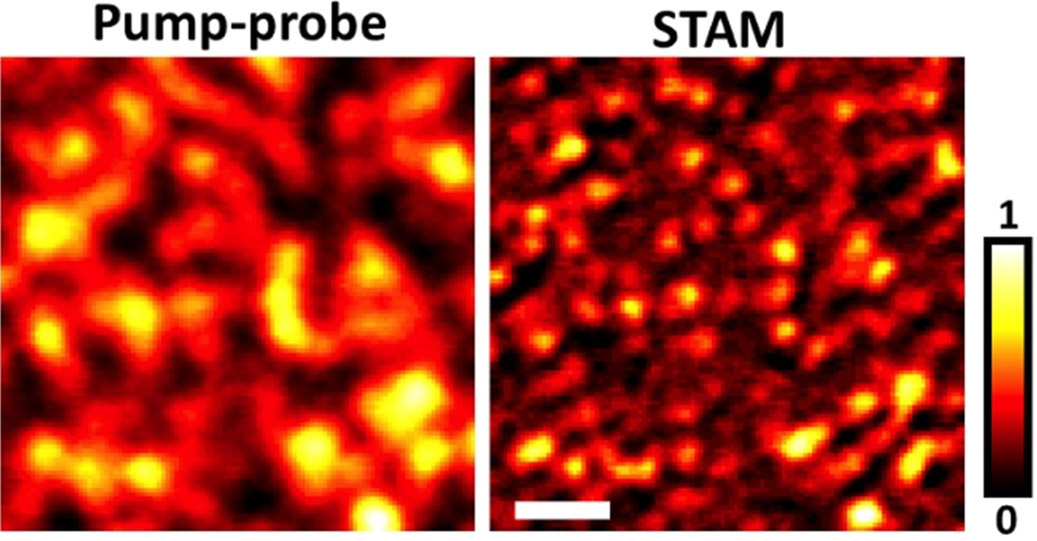 In summary, we have demonstrated an approach for imaging non-fluorescent nanostructures. Subdiffraction-limited imaging of graphite nanoplatelets achieved a resolution of λ/4. The STAM technique enables super-resolution imaging of nanomaterials and nonfluorescent chromophores that may remain out of reach for fluorescence-based super-resolution methods. We are now working to optimize the STAM system, for instance, by using a shorter wavelength to further improve the resolution. We also intend to apply STAM to image other nanomaterials with saturable absorption, such as single-wall carbon nanotubes,7–9 as well as iron oxide and zinc oxide nanoparticles,10, 11 which are biocompatible imaging agents.12,13

Pu Wang received a BS in physics from Fudan University, China, and a master's in medical biophysics from the Indiana University School of Medicine. He is currently working toward a PhD in biomedical engineering. His research interests include nonlinear optical microscopy and photoacoustic imaging and spectroscopy.

Ji-xin Cheng received a BS and PhD from the Department of Chemical Physics at the University of Science and Technology, China. He is currently a professor at the Weldon School of Biomedical Engineering at Purdue. His lab develops label-free imaging tools and nanotechnologies for challenging biomedical applications.