A mini array of five small-size telescopes has the potential to be used as part of the Cherenkov Telescope Array and to make highly sensitive observations.
08 April 2014
Rafał Moderski and the SST-1M Consortium for the CTA

The Cherenkov Telescope Array (CTA) project is a new high-energy gamma-ray astronomical observatory. It will observe Cherenkov radiation (emitted when a charged particle travels faster than light through a given medium) that is created when incoming gamma-ray photons interact with the Earth's atmosphere. The CTA will detect these gamma rays in an energy range that extends from several tens of GeV to beyond 100TeV.1, 2 The overall sensitivity of the CTA will be an order of magnitude greater, over a larger energy range, than existing instruments—e.g., the High Energy Stereoscopic System (H.E.S.S.), the Very Energetic Radiation Imaging Telescope Array System (VERITAS), and the Major Atmospheric Gamma-ray Imaging Cherenkov Telescopes (MAGIC)—as well as the High Altitude Water Cherenkov Observatory (HAWC) that is currently being built. However, to achieve the specified detection capabilities for CTA, new telescope designs have been required.

The CTA Observatory will be composed of one array in the northern hemisphere and another in the southern hemisphere. The southern array will consist largely of small-size telescopes (SSTs) that are designed for the observations of the highest energy photons. There will be about 70 SSTs, at a spacing of more than 200m, to create an effective area of more than 7km2. The new CTA high-energy gamma-ray observations will be used to investigate particle acceleration processes in a number of astronomical objects (e.g., supernova remnants, pulsar wind nebulae, and x-ray binaries), and thus will lead to new insights about the sources of cosmic rays. It may also be possible to study dark matter and quantum gravity with high-energy gamma-ray astronomy.

Our consortium of Polish and Swiss institutions is currently developing a mini array (the Single Mirror Astroparticle Telescope, SMART) of five single-mirror small-size telescopes (SST-1Ms) for the CTA.3 Our SST-1M instrument (see Figure 1) is based around the Davies-Cotton design, which is a proven concept used in operating Cherenkov telescopes. The main purpose of the SMART array is to demonstrate the scientific potential of our SST-1Ms. We will also use SMART to validate the estimated performance, array control, and data acquisition systems of the SST-1Ms. We will run a separate scientific program with SMART until the full CTA array becomes operational. 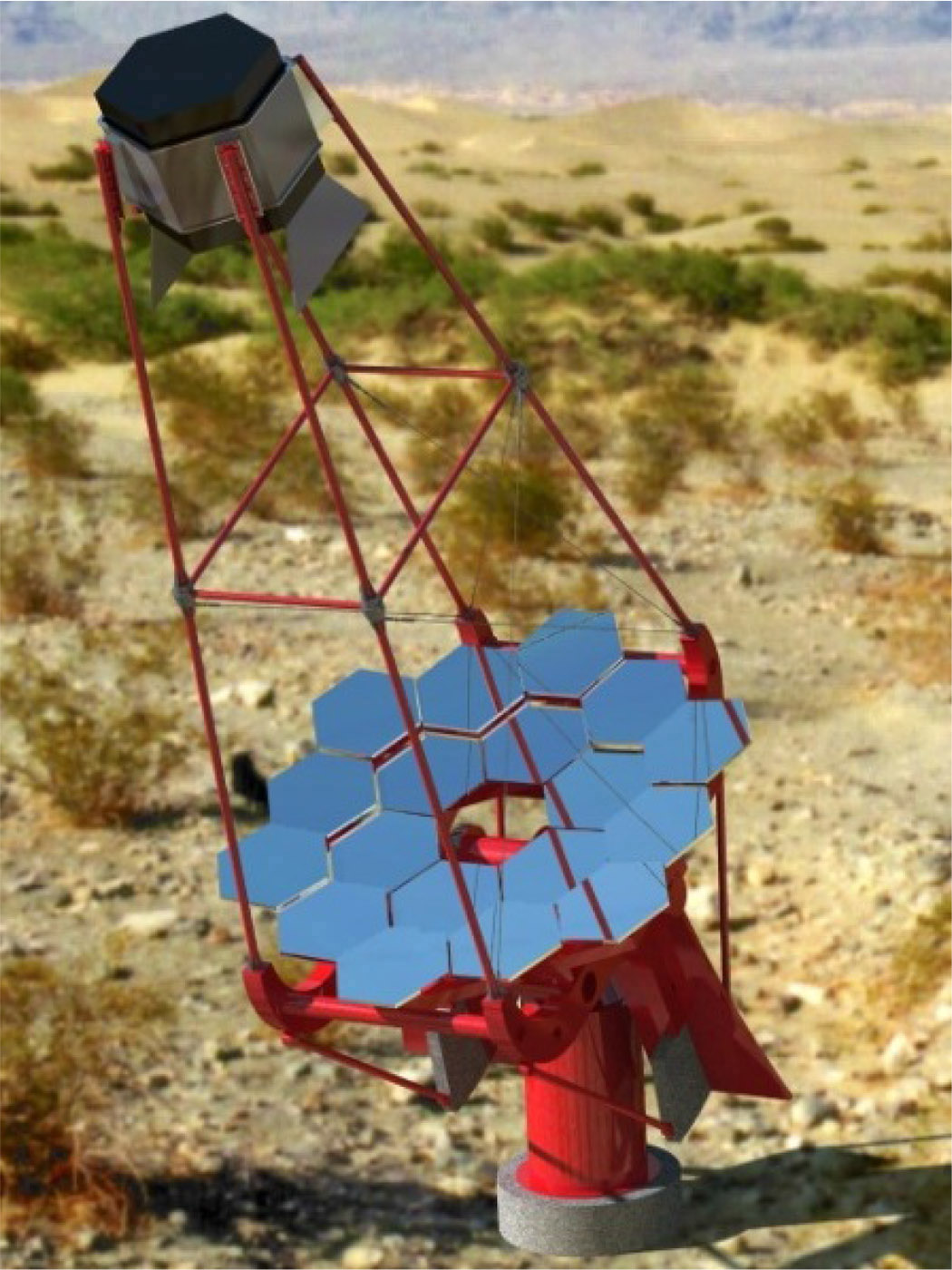 Figure 1. An artist's impression of the single-mirror small-size telescope (SST-1M). The 18 individual mirror facets create a total collection area of about 9.5m2.

The design for our SST-1M incorporates a tower, a dish support structure, counterweights, and a quadrupod.4 We recently built an SST-1M structure at the Institute of Nuclear Physics in Cracow, Poland (see Figure 2). The main mirror of the SST-1M is divided into 18 hexagonal mirror facets and has a collection area of about 9.5m2, a focal length of 5.6m, and an aperture of 4m. The main detector for the telescope—the DigiCam—is placed on the quadrupod in front of the main mirror. We have designed this fully digital camera with a mosaic of 1296 Geiger-mode avalanche photodiodes (used as photodetectors) to provide a 9° field of view.5 The compact size, configuration flexibility (from the digital electronics), and large field of view of our camera represent a major advance over similar instruments that use vacuum-tube photomultipliers and analog signal processing. A prototype module of the camera photodetector plane, which was recently produced at the University of Geneva, is shown in Figure 3. 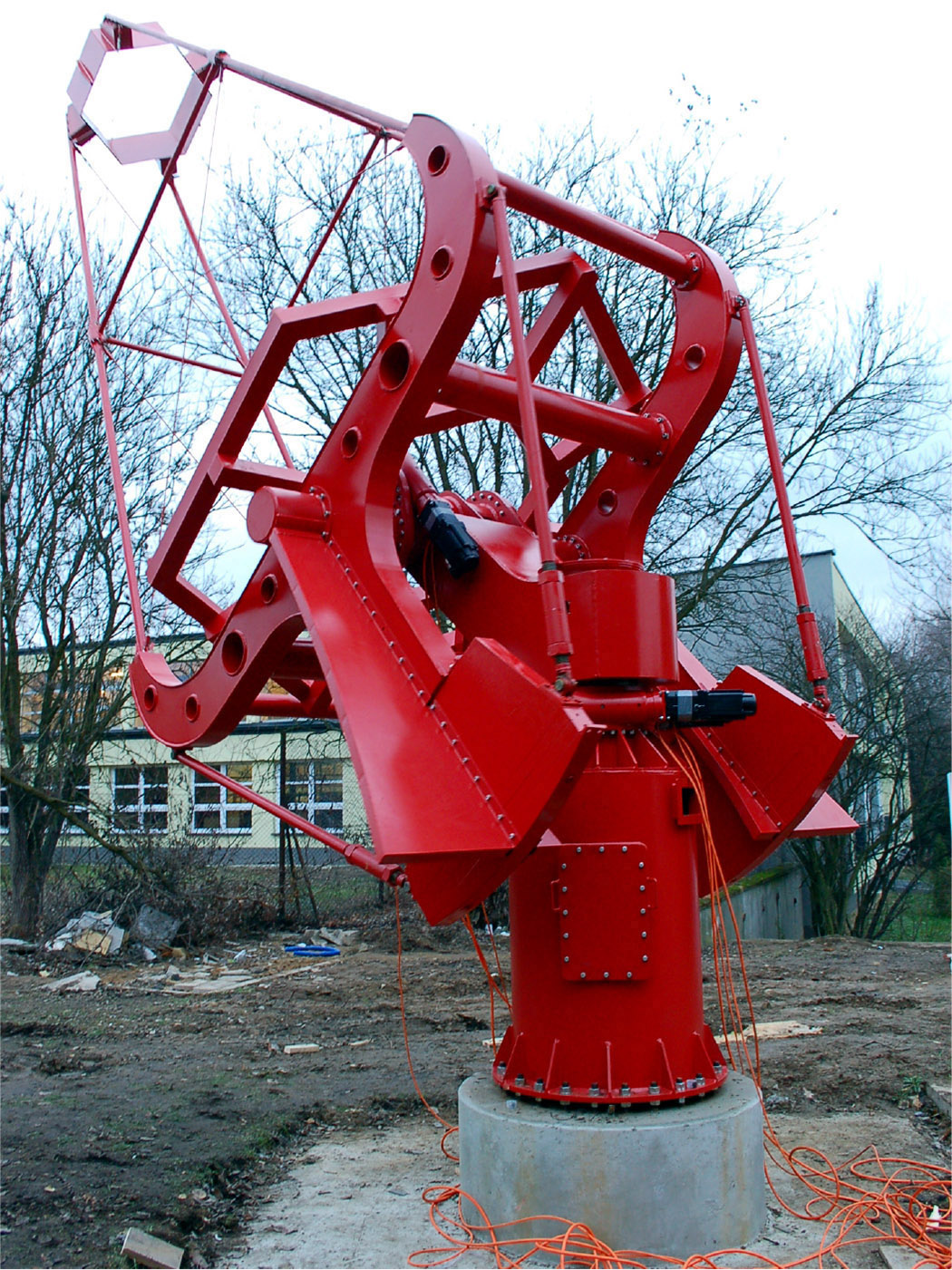 Figure 2. The structure of the SST-1M built at the Institute of Nuclear Physics in Cracow, Poland, with a temporary drive system installation. The structure has overall dimensions of 5 ×9 × 3.5m and a weight of about 9t. 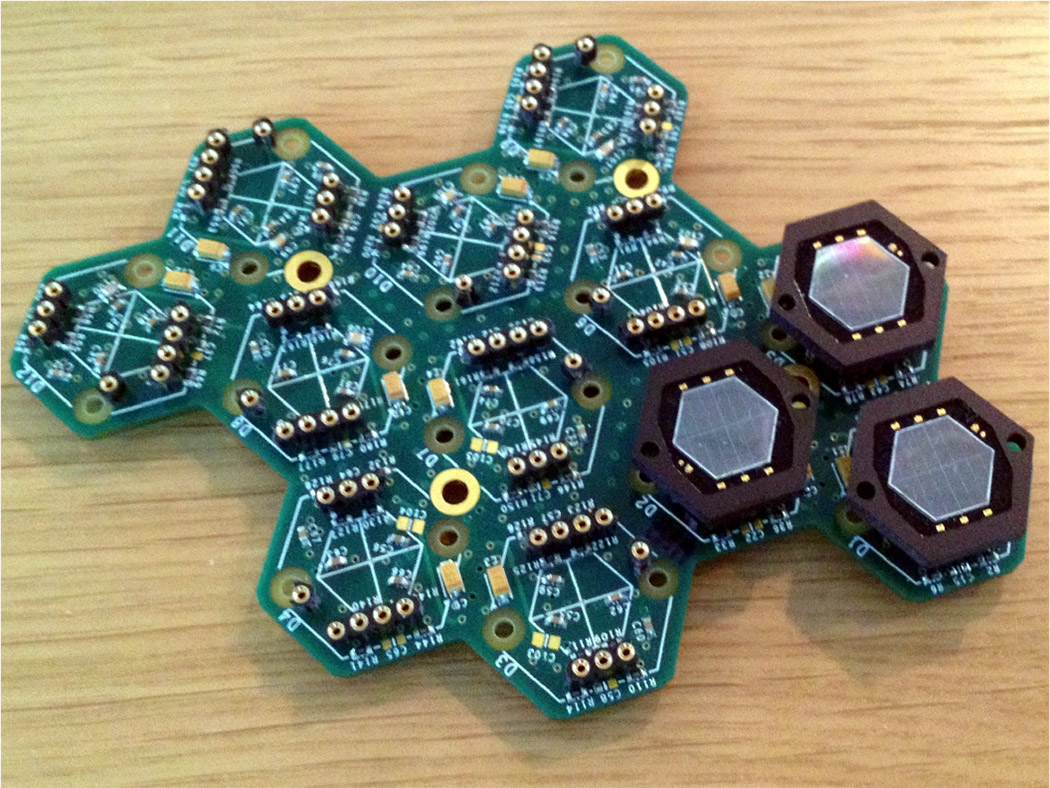 We have used the results of numerical simulations for the whole CTA to estimate the performance of our SMART mini array. These simulations were made in 2013 using a grid computing infrastructure to model the processes of air shower development, Cherenkov light emission, propagation in the atmosphere, and detection by the Cherenkov telescope array.6 A total of 229 telescope positions, with seven different telescope types, were simulated in the campaign. We analyzed data from two SST-1M subsets, which differ in telescope separation, with dedicated software.6 According to our preliminary results (see Figure 4), the SMART mini array should offer a maximum sensitivity of about 10−12erg cm−2s−1 to primary gamma rays with 10TeV energy, an angular resolution of about 0.05°, and better than 10% energy resolution. 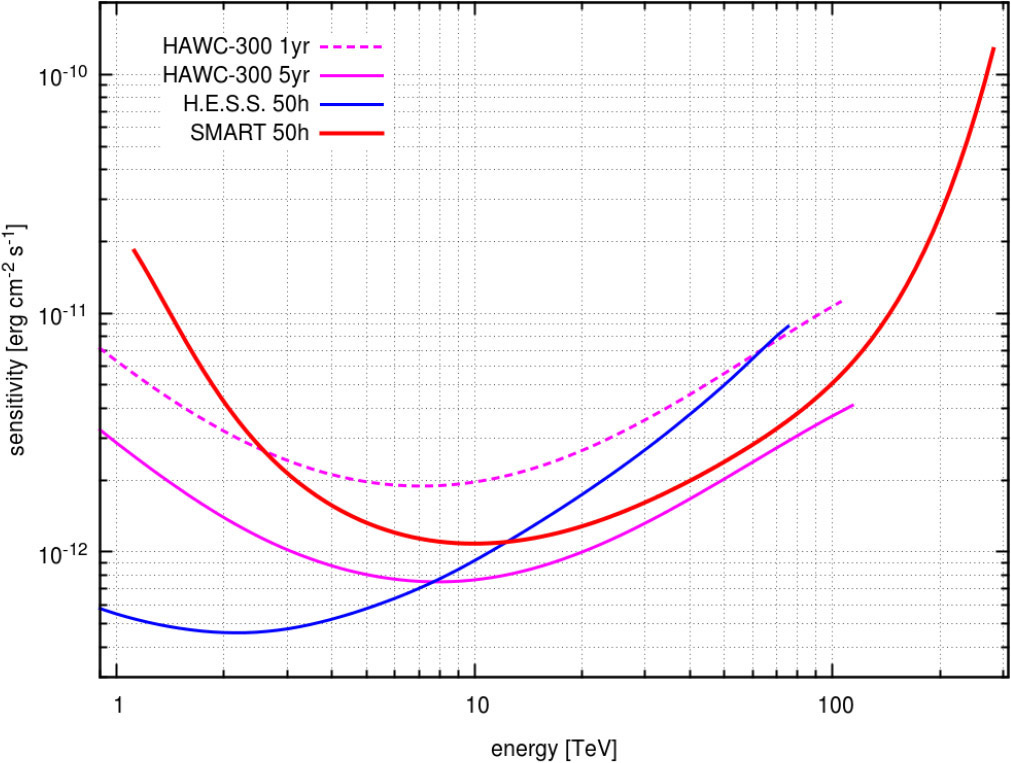 Figure 4. Differential sensitivity of the Single Mirror Astroparticle Telescope (SMART) mini array for a gamma-ray point source. The SMART results are for a 50h observation with a significance level of 5σand are compared with the sensitivity of the High Energy Stereoscopic System (H.E.S.S.)7 and the High Altitude Water Cherenkov Observatory (HAWC).8 The H.E.S.S. sensitivity was calculated using Cherenkov Telescope Array baseline analysis applied to H.E.S.S. simulations.

The high sensitivity of SMART compared with other operating high-energy gamma-ray observatories is due to its large telescope separation and large camera field of view. The sensitivity level of SMART will not be achieved with other instruments (e.g., HAWC) within the next five years. SMART will therefore provide new opportunities to make scientific discoveries in the 10TeV domain. Potential observation targets include the Crab Nebula (a standard candle in high-energy astronomy), Vela X (a pulsar), RX J1713.6-3946 (a supernova remnant with poorly determined spectrum above 30TeV), and LS 5039 (a galactic microquasar). SMART measurements will be made with long observation times, which are possible because of the short list of science targets and because the silicon photodetectors are not affected by moonlit observations. The high-quality data will allow studies of particle acceleration mechanisms, cosmic-ray origins, and radiation emission scenarios. The telescope's large field of view should also provide opportunities for serendipitous discoveries.

We have designed, and are in the process of building, a mini array of five small-size Cherenkov telescopes. If approved, this instrument will be used as part of the CTA project for sensitive high-energy gamma-ray astronomical observations. We have recently built an SST-1M structure at the Institute of Nuclear Physics in Cracow, Poland, and we are currently developing its drive system control software. We will soon equip the telescope with mirrors and a camera demonstrator to validate the design and identify areas that require improvement. We also plan to run dedicated simulations of the SMART mini array so that we can optimize its layout and performance. In these simulations, we will use the SST-1M parameters that were measured during the prototype commissioning. The simulation results will allow us to make the final improvements to the telescope design and then construct the array. The SMART mini array is due to begin operations at the end of 2016.

Financial support has been provided by the Swiss National Science Foundation, the University of Geneva, and the Boninchi Foundation, as well as from the Polish National Centre for Research and Development, National Science Centre, and Ministry of Science and Higher Education through grants 498/FNiTP/158/2011 and UMO-2011/01/M/ST9/01891. The PL-Grid infrastructure was used to support this research.

Rafał Moderski is an assistant professor and a member of the high energy astrophysics research group. He works on numerical simulations of the SST-1M telescope and SMART mini-array performances and he supervises development of the telescope auxiliary systems.