Photovoltaics have the potential to become a major contributor to future sustainable energy generation. To this end, device efficiency needs to be brought beyond present physical limits. Solar cells cannot absorb light with less energy than the bandgap (absorption threshold of the photovoltaic absorber material), and consequently this energy source is usually uncaptured. Upconversion (UC) devices harvest those unused subthreshold photons behind the solar cell, create one higher-energy photon out of (at least) two transmitted photons, and radiate upconverted light back toward the solar cell, thus expanding the usable solar spectrum (see Figure 1). Key requirements for UC units are broad absorption and high UC quantum yield under even the low-intensity incoherent illumination that is available to solar energy conversion devices. 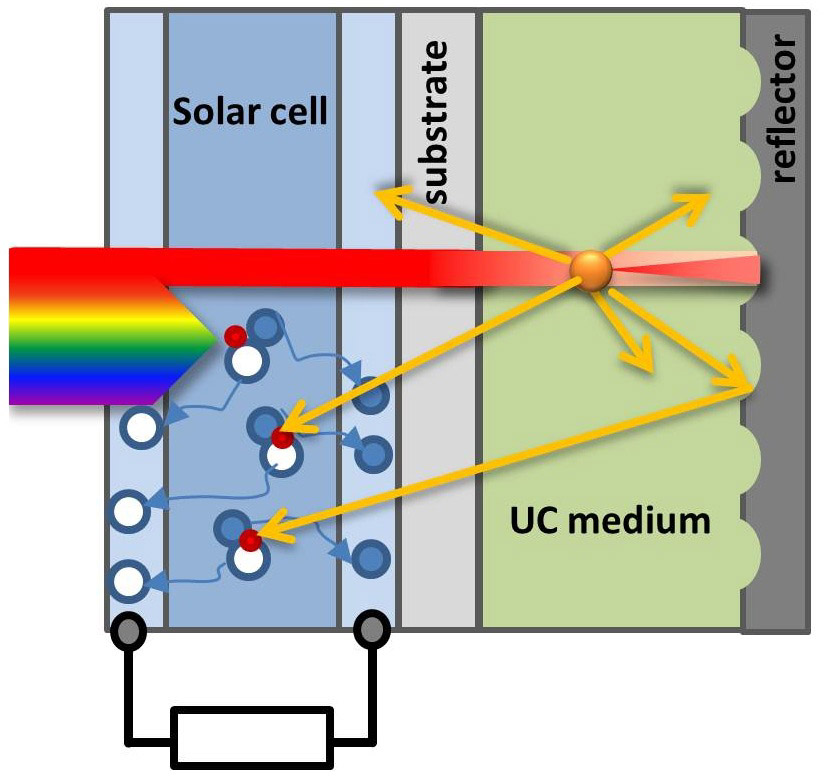 Figure 1. Principle of a solar cell assisted by upconversion (UC). The creation of usable electron-hole pairs in the photovoltaic absorber material (left) is augmented by light, usually transmitted unused, which is converted to higher photon energies in the UC unit (right).

Upconversion was proposed as a means to increase solar cell efficiency about a decade ago,1 and research has since then been primarily focused on UC processes occurring in lanthanide-doped glasses or nanoparticles.2 Although transitions between the rare earth 4f orbitals lie in an energy range promising for combination with common crystalline silicon solar cells, UC systems based on erbium (Er) or ytterbium (Yb) suffer from weak absorption by Laporte-forbidden transitions, a narrow absorption bandwidth, and the resulting low efficiency. Recently, triplet-triplet annihilation (TTA) in organic molecules has been demonstrated to be an alternative UC mechanism highly promising for solar energy application.3 It proceeds efficiently even for low photon flux and displays highly tunable absorption characteristics.

The key to high quantum yield from TTA-UC lies in the combination of two different classes of organic molecules dissolved together in organic solvents or in a polymeric host matrix.4 A so-called sensitizer species, which in many cases is a metalated porphyrin, absorbs a low-energy photon (process 1 in Figure 2) and undergoes fast intersystem crossing (ISC, process 2), whereby the spin of the exciton changes from 0 (singlet, electron and hole spin cancel) to 1 (triplet, electron and hole spin add). This change of spin state is facilitated by the heavy metal in the porphyrin center. The resulting triplet state cannot radiatively relax back to the ground state and is therefore long-lived. Interaction with a second class of molecule transfers the triplet energy to the so-called emitter species by triplet energy transfer (TET, process 3). Successive interaction of two emitters yields TTA (process 4), which combines the two triplet excitons to create one higher-energy singlet state. The singlet state quickly relaxes back to the ground state under efficient emission of a high-energy photon (process 5). 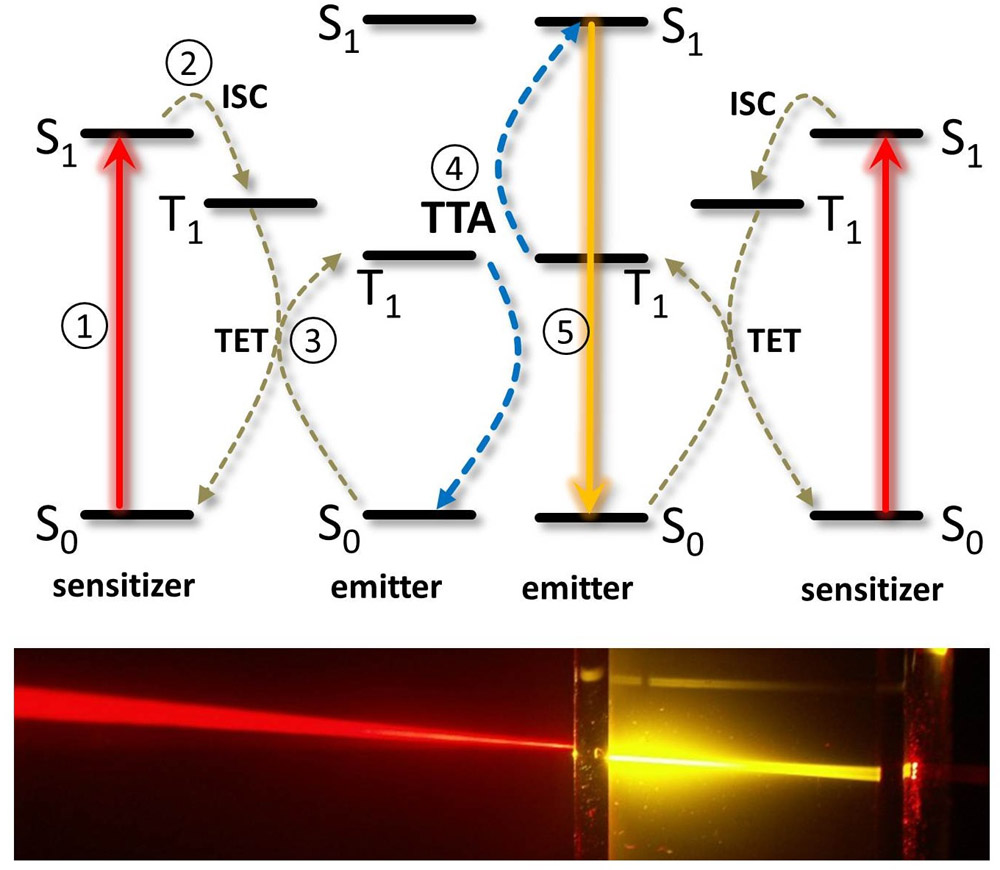 We recently explored the feasibility of TTA-UC for expanding the spectral harvest of thin-film solar cells. We combined TTA-UC systems comprising tailored molecular sensitizer species5 with amorphous silicon (a-Si) solar cells,6, 7 with organic bulk heterojunction solar cells,8 and with dye-sensitized solar cells.9 We defined a figure of merit (FOM) for UC-assisted solar cells, which takes into account the inherent nonlinearity of the UC process in the benchmarking of different UC systems. Usually, UC systems are measured under highly concentrated illumination, which hinders a fair comparison of UC units measured under different conditions. Our FOM traces the UC performance back to conditions equivalent to the standard operation of a solar cell,6 and equals the photocurrent increase by UC under 1-sun conditions.

Using the FOM for guidance, we concentrated on increasing the performance of the solar cell/UC assembly. Shifting the sensitizer absorption into the IR by extending the π-system of the palladated sensitizer porphyrin led to a fourfold increase of the FOM6 compared with the original sensitizer species, using 130nm-thick hydrogenated a-Si (a-Si:H) cells. This preliminary result already beats the state of the art for a-Si:H cells augmented by rare-earth UC by a factor of about 200.10 Combining the UC unit with a back-reflecting surface helps to multi-pass the incident light as well as to out-couple the upconverted light, and led to a consecutive increase of the FOM7 by another factor of 3 to about 2–3×10−4mA/cm2. Roughly the same level of photocurrent enhancement could be obtained for organic bulk heterojunction solar cells8 as well as for dye-sensitized solar cells with a fully device-integrated UC unit.9 The latter result was measured under illumination conditions very similar to device operation, reaching concentration factors as low as 3 suns. Our current record FOM stands at 7.6×10−4mA/cm2, obtained with an a-Si:H solar cell optimized for low parasitic absorption.8

In summary, we have shown cumulative FOM improvements of roughly three orders of magnitude compared with lanthanide-based UC and a first move toward device-integrated UC units. However, the photocurrent increase under 1 sun achieved to date is still far from commercially relevant. We are therefore now working to increase the UC yield under low-illumination conditions. We are following two strategies in parallel and have recently obtained initial, promising results. First, we are increasing the dye concentration by tethering the UC-active molecules onto nanosized support structures to increase the steady-state triplet density and therefore the UC yield.11 Second, we are focusing the incident light locally in the UC layer using micro-optical structures such as parabolic back-reflectors.12 In combination, these strategies will enable us to exploit near-field optical effects such as plasmonic resonances or wave-guide modes once characteristic absorption lengths in the 10–100nm range have been reached, which should make further increases in the UC yield possible. We are confident that TTA-UC will contribute significant photocurrent to high-gap solar cells and photoelectrochemical devices for fuel production in the near future.