Biosensors are all based on the same general concept of a biomolecular reaction with a sample (or analyte), followed by conversion (transduction) of a chemical signal to an electronic one. Typically, a biosensor provides quantitative information on the concentration of a single analyte such as glucose, and suitable biomolecular reactions can be based on enzyme-catalyzed processes or biorecognition events. The entire biosensor assembly includes an interface integrated with an electronic transduction instrument, a power supply, and an electronic signal-processing unit, as shown in Figure 1(A). Usually, the output signal is linearly proportional to the sample concentration and can be characterized by its dynamic concentration range. 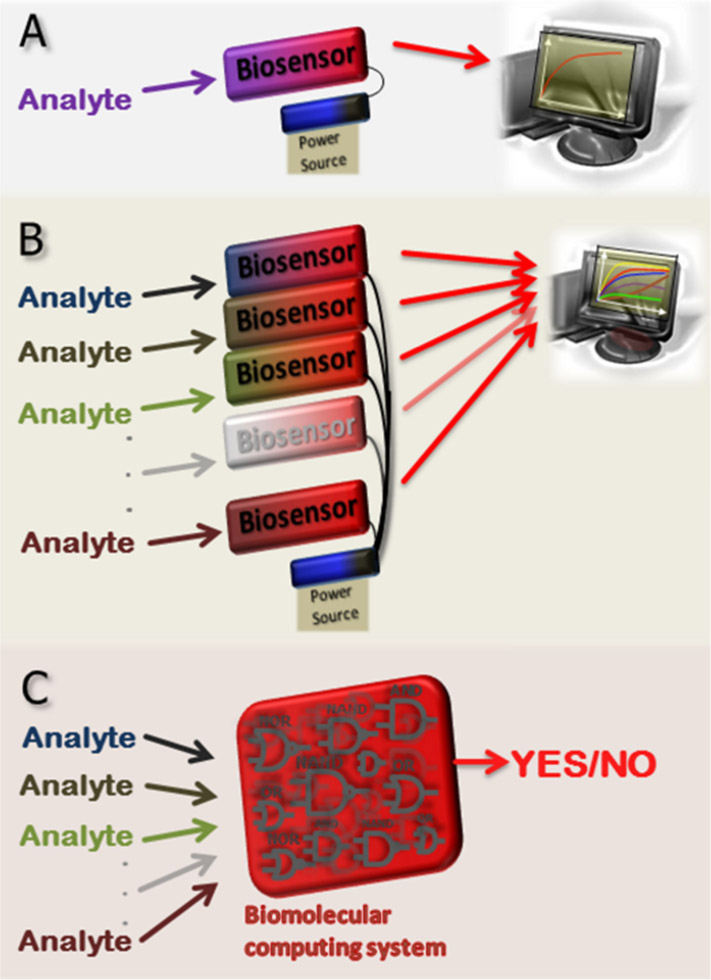 Figure 1. Different approaches to biosensing. (A) A traditional single-analyte biosensor. (B) An array of parallel biosensors for multi-analyte analysis with computer-processed multi-channel signals. (C) Novel multi-analyte analysis carried out by a biomolecular logic system with the input signals chemically processed and the final output generated in binary YES/NO form. (Reprinted with permission.4)

Currently, very few applications generate a bioanalytical result with a qualitative YES/NO conclusion. This format can be useful when a rapid answer is important and there is no need for precise, quantitative measurements, or when simultaneous analysis of multiple analyte species is required. Examples are a pregnancy test or detection of chemical weapons on a battlefield.

Biosensor arrays carry out simultaneous analysis of several different species. The arrays generate signals from multiple analytical channels working in parallel, each channel providing quantitative information on one specific analyte. The resulting signals can then be processed by a computer, as shown in Figure 1(B). In ‘field’ situations, when extensive use of computers or human involvement is not practical, drawing quantitative conclusions from the results obtained by multi-channel analysis can be challenging, because the concentrations of different analytes typically span wide ranges of values, and their direct inspection may not be definitive. My colleagues and I have demonstrated multianalyte enzyme biosensors with built-in Boolean logic that generate a binary YES/NO output.

Our approach is based on unconventional chemical computing,1 specifically, biomolecular computing systems.2 These mimic electronic systems to process chemical signals according to Boolean logic. In the simplest example, a biochemical reaction proceeding only in the presence of two substances can represent an AND Boolean logic gate, while another reaction activated by either of two substances mimics an OR gate. We may consider a biocatalytic chain reaction with several reaction steps as a logic circuit composed of concatenated logic gates, as shown in Figure 1(C). Being fairly simple, biochemical logic circuits cannot compete with electronic computing systems, but they are nonetheless promising for complex, qualitative biosensing applications that require several biochemical signals to be processed at the same time.

Many chemical systems used for information processing are based on molecules or supra-molecular ensembles in states that can be switched from one to another upon application of external physical or chemical inputs. Examples include redox changes, acid-base or chelating reactions, and isomerization, which can be induced by external physical inputs (light, magnetic fields, or electrochemical potential, for example) and sometimes by chemical signals, such as pH changes or metal cation additions. The output signals generated by the chemical switchable systems are usually read by optical methods (absorbance or fluorescence spectroscopy) or by electrochemical means (currents or potential generated at electrodes or in field-effect transistors).

We observed chemical reactions as changes in bulk material properties or structural re-organizations at the single molecule level, and described these as information processing language for computing operations. We designed supra-molecular ensembles that, upon exposure to external inputs, operated as chemical switchable elements performing logic operations. Based on molecular switchable systems, we realized various Boolean logic operations such as AND and OR.3

As an example, a two-enzyme system composed of soluble glucose oxidase (GOx) and catalase (Cat) acts as the logic gate machinery, which we activated with two chemical input signals: H2O2 and glucose. We detected the product of the biocatalytic oxidation of glucose—gluconic acid—by optical means in the presence of special ‘developing’ reagents, and the resulting optical absorbance change was the output signal of the gate. The oxidation reaction required the presence of glucose and O2, where the latter was produced in situ upon H2O2 reacting with Cat. Thus, the output signal appeared only in the presence of both inputs (combination 1,1) while in the absence of any or both input signals (combinations 0,1; 1,0; and 0,0) the system did not produce gluconic acid. To define digital values of the output signal we used a threshold value separating small background optical changes, defined as 0 output, and large absorbance changes defined as 1 output. The features of this biocatalytic system resemble the Boolean AND logic gate.

Biochemical computing and logic-gate systems based on biomolecules have the potential to revolutionize the field of biosensors. As well as signal processing, they might enable direct coupling with signal-responsive materials and chemical actuators to offer a closed-loop sense/act operation. Biochemical networks could offer robust, error-free operation with appropriate optimization of their components and interconnections.

We are now investigating networks with computational steps that involve only biochemical processes for new technological capabilities that include multi-input biosensors with new functionalities.4 In future collaborations with engineers, biochemists, and computer specialists, we will seek to improve the chemical stability of the biomolecular components by immobilizing them in signal-responsive materials or at functional interfaces. The ultimate goal of our work is a microfluidic lab-on-a-chip performing multi-enzyme-catalyzed cascades and operating like an electronic chip and large networks for processing biochemical signals.

Evgeny Katz is the Milton Kerker Chair of Chemistry at the Department of Chemistry and Biomolecular Science. He has co-authored more than 370 papers and was included in the Thomson Reuters list of the world's top 100 chemists 2000–2010 for the impact of his publications.