Ground-based astronomical observations are seriously affected by atmospheric turbulence, which causes blurring and twinkling of objects in the sky. This limits telescope sensitivity and degrades astronomical data quality. The Center for High Angular Resolution Astronomy (CHARA) Array,1, 2 at the Mount Wilson Observatory, is an optical interferometer that combines the light from its six telescopes to form interference patterns known as fringes. The six 1m-diameter telescopes have baselines of 30–330m, which gives the array the highest angular resolution of any telescope at visible and near-IR wavelengths (equal to that of a 330m-diameter telescope). The CHARA Array can therefore be used to see the detailed structure of astronomical objects (see Figure 1).3 Since its commissioning in 2004, the CHARA Array has contributed to the studies of nearby stellar systems. The array's performance, however, is limited by the seeing conditions that result from atmospheric turbulence. Poor seeing causes the fringes to move around the camera, makes it harder to track the fringes of faint objects, and degrades the data quality of bright fringes. 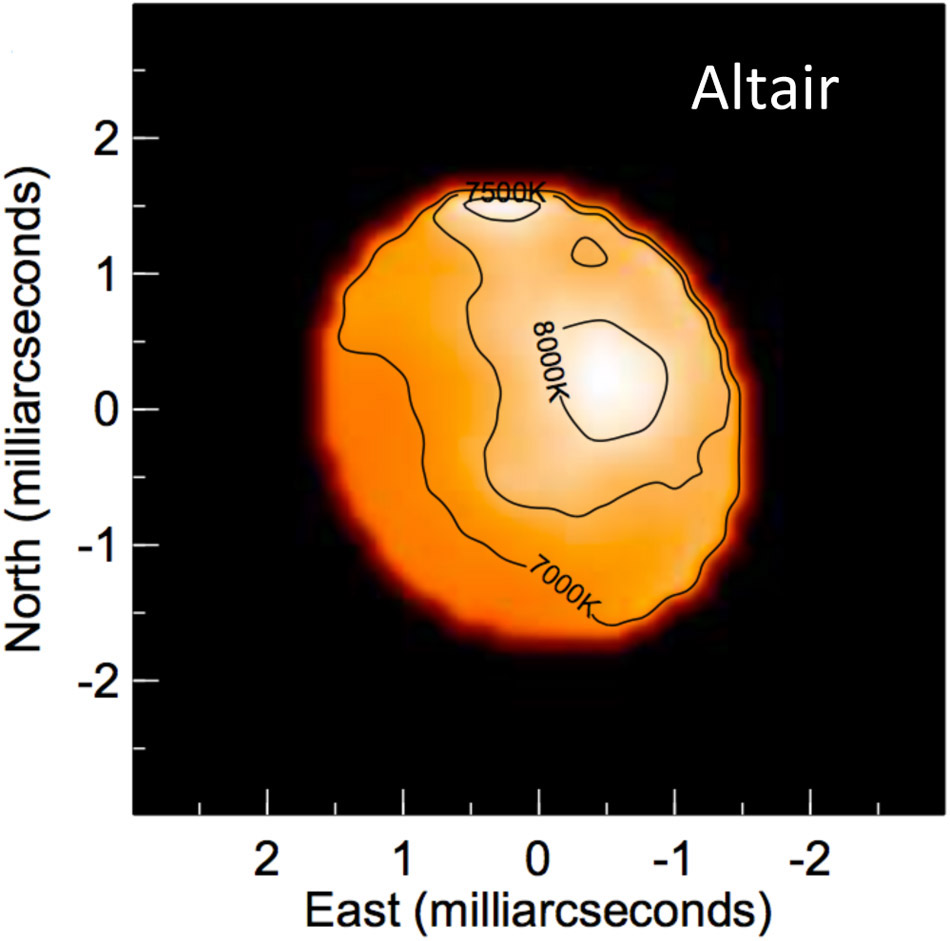 Figure 1. Surface image of the star Altair, obtained using the Center for High Angular Resolution Astronomy (CHARA) Array interferometer. This is the first main sequence star, other than the Sun, to have been imaged.3The bright part of the star at the center of the image is one of the poles. Contours show the star's temperature profile.

Adaptive optics (AO) systems have been developed for many telescopes (e.g., the Large Binocular Telescope Observatory and the W. M. Keck Observatory) in the last two decades. AO systems are used to measure, at high speeds, atmospheric turbulence and then compensate for it with optical devices known as deformable mirrors (DMs). This technique has proven to be very efficient and able to remove most turbulent effects.

To study fainter astronomical objects and to improve science results for brighter objects, we have started to develop and install an AO system for each of the CHARA Array telescopes. The main science goal of our AO upgrade is to image and model young stellar objects (YSOs) at near-IR (NIR) wavelengths. This will allow the geometry and evolution of the innermost dusty disks around YSOs to be studied and to investigate how the disks interact with their host stars.

Phase I of our AO upgrade system has three parts: an on-telescope optical feed system (OFS), an on-telescope wavefront sensor (WFS),4 and a complete laboratory AO system. The OFS uses a dichroic filter in the collimated (parallel) beam path to reflect starlight into the WFS and acquisition systems. Three types of dichroic filters (with different reflection ratios in visible wavelengths) are available to optimize the light for the beam combiners, which each operate at a different waveband in the laboratory. The OFS also provides a beacon that is used as a reference source for the laboratory AO system, which measures the aberrations caused by the large non-common path between the telescopes and the beam combiner laboratory. We use a Shack-Hartmann WFS (shown in Figure 2) on the telescope and in the laboratory because of its simplicity, stability, and compact size. In the telescope WFS, we use a lenslet array to divide the telescope pupil into 36 sub-apertures. The position of the images from each of the sub-apertures is used to estimate the local slopes of the wavefront. We then use the slope values to reconstruct the full shape of the wavefront that enters the telescope. We use an electron multiplying CCD camera (Andor iXon Ultra 897) to amplify the signals through an avalanche-gain register readout, which sufficiently suppresses the readout noise. The measured wavefront information is subsequently sent to the secondary telescope mirror to correct for the tip/tilt aberrations. With our laboratory AO system, we then correct for the quasi-static aberrations in the non-common path between the telescopes and the beam combining laboratory. It can also receive open-loop corrections that are transmitted from the on-telescope WFS. In phase II of our project, we will install DMs at the telescopes to complete the full high-speed closed-loop AO system. 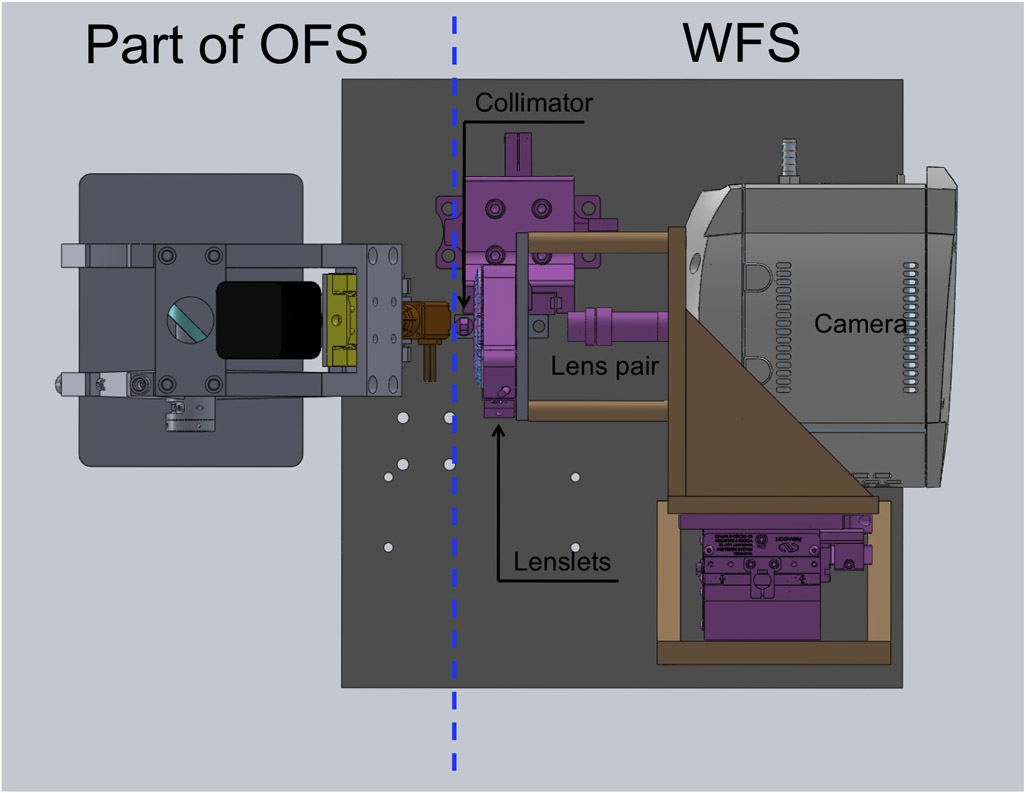 The AO upgrade will significantly improve the number of YSOs that can be observed with the CHARA Array. After phase I of our upgrade, the number of unknown YSOs that we can observe in the constellation Taurus (one of the nearest regions of star formation) will increase from 11 to about 50. The upgrade will also allow some classes of objects to be observed with the CHARA Array for the first time, e.g., some of the brightest active galactic nuclei and microquasars. After phase II of our upgrade, most of the relatively bright CHARA targets will allow good AO correction even under poor seeing conditions. The full upgrade will provide good and constant data quality under most seeing conditions.

We conducted a commissioning test for the WFS and OFS on one of the six CHARA Array telescopes during January 2014. With the new AO system we were able to correct the low-order atmospheric turbulence and lock stars.5 An example WFS image that we obtained during this test is shown in Figure 3. We performed a sensitivity analysis that shows the new AO system can lock stars that are 33 times more faint than can be achieved with the existing system, which meets the design criteria for our system. 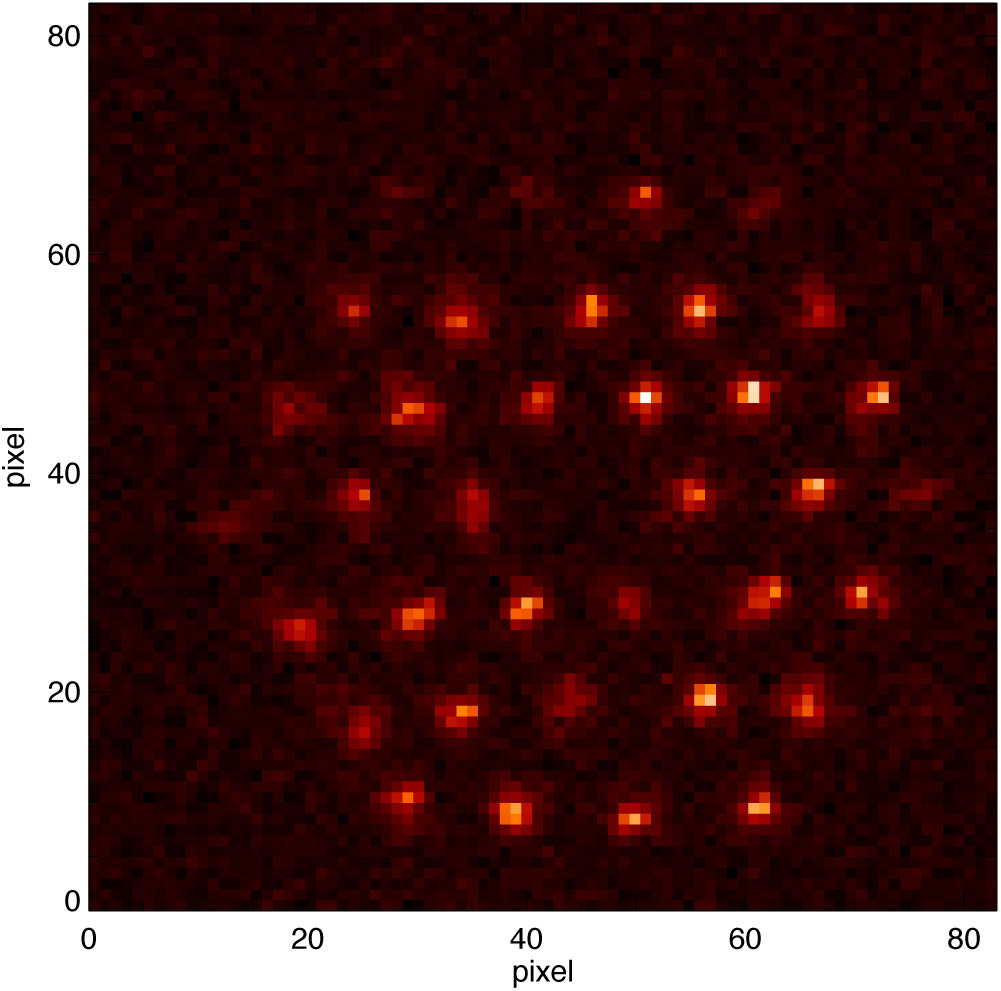 Figure 3. An image from the CHARA Array WFS, showing 36 stellar images, each focused by one sub-aperture.

A new AO system has been designed and is being installed for the CHARA Array at the Mount Wilson Observatory. This upgrade will significantly improve the observing capabilities of the telescope and will allow more astronomical objects to be studied. During 2014 we will build five copies of the WFS system for the telescopes that remain to be upgraded. We will also install the first of our AO systems in the laboratory. Concurrently, we are seeking funds for phase II of our project, in which fast DMs will be installed on the telescope to enable full high-order turbulence corrections.

We acknowledge important feedback received from Chris Shelton, Brent Ellerbroek, and Christoph Baranec (AO design review panel), as well as helpful discussions with Dave Mozurkewuch and Peter Tuthill. The CHARA Array is operated by Georgia State University (GSU) and was built with funding from the National Science Foundation (NSF), GSU, the W. M. Keck Foundation, and the David and Lucile Packard Foundation. It is currently funded partially by the NSF under grant AST-0606958. The CHARA phase I AO upgrade is funded by the National Science Foundation under grant AST-1106136.

Xiao Che obtained his undergraduate and master's degrees in engineering physics from Tsinghua University, China. He is currently an astronomy PhD candidate and expects to graduate in May 2014. His research focuses on optical interferometry, using instrumental developments and theoretical approaches.

Stephen Ridgway is an astronomer at NOAO and an adjunct professor at Georgia State University, where he worked on the development of the CHARA Array. His current work involves providing scheduling tools and metrics for the Large Synoptic Survey Telescope operations simulator team.