The primary source of energy for nearly all life is the Sun, energy from which enters the biosphere by photosynthesis in plants, algae, and some types of bacteria. Plant photosynthesis is driven by visible light that is absorbed by pigment molecules, mainly chlorophyll A and B and carotenoids. Photosynthetically active radiation (PAR) describes the range of solar radiation (from 400 up to 700nm) that is harvested for carbon fixation. Although some photosynthetic bacteria contain pigments that absorb light at even longer wavelengths, its energy is too weak for carbon fixation and so they are not able to use this light.

If photosynthetic organisms could use IR radiation (720nm wavelength and longer) as an excitation source, we could enhance the efficiency of biofuel production. However, no method of extending the upper PAR limit far into the IR has so far been reported. The only upconversion process known for excitation with sunlight is triplet-triplet annihilation (TTA) photon energy upconversion (UC).1 We have proposed using TTA-UC based on palladium tetraanthraporphyrins (TAPs) as light sensitizers to extend the PAR range.

The sensitizer singlet states have a high molar extinction coefficient for single-photon absorption, but a short lifetime (in the order of nanoseconds), and therefore the absorbed sunlight energy is fast dissipated. In contrast, the excited emitter triplet states are metastable and serve as an energy reservoir for further energy transfer. The process of TTA-UC combines the advantages of both singlet and triplet states: excitation is performed by single-photon absorption, but the final excited state is metastable. TAPs are a unique type of triplet sensitizer, possessing strong absorption in the IR that can be tuned within 720–830nm by chemically modifying anthracene rings, e.g., by introducing electron-donating substituents.2 Palladium complexes of TAPs are suitable sensitizers for the TTA-UC process with rubrene (see Figure 1).3 Recent optimizations of TAP structures have raised the quantum efficiency of the process to 4%. 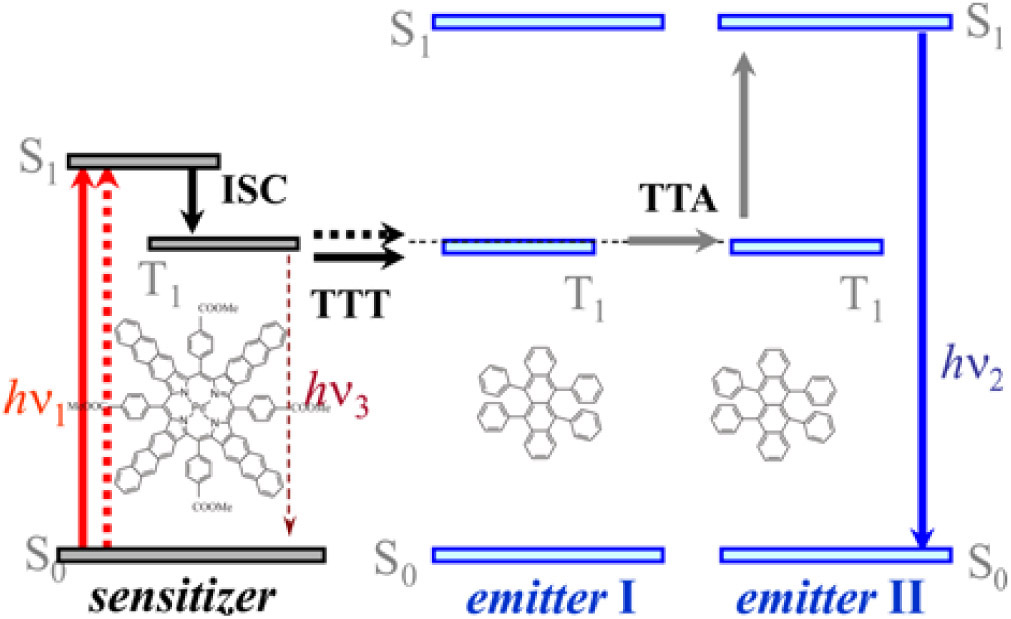 Figure 1. Simplified energy schematic of the triplet-triplet annihilation (TTA) photon energy upconversion (UC) process in the two-component palladium-tetraanthraporphyrin (TAP, molecule shown on left)/rubrene (molecule shown center and right) system. The photon energy (hν1) is absorbed by a sensitizer and stored in its triplet state (T1) via a process of intersystem crossing (ISC). This energy (hν3) is then transferred to an emitter by triplet-triplet transfer (TTT). Next, the excited triplet states of two emitter molecules undergo TTA, in which one emitter molecule returns to its singlet ground state (S0) and the other molecule gains the energy of both triplet states and is excited to the higher singlet state (S1). As the singlet state emitter decays radiatively back to the ground state (S0), a fluorescence photon is emitted (hν2), which is strongly blue-shifted to shorter wavelengths in relation to the excitation photons.

The resulting emission of TAP-rubrene samples matches the absorption of accessory pigments used by plants to capture sunlight, particularly R-phycoerythrin, a pigment found in a variety of algal and cyanobacteria species (see Figure 2). Obviously, the upconverted fluorescence at 560nm (the rubrene fluorescence) falls within the PAR range. 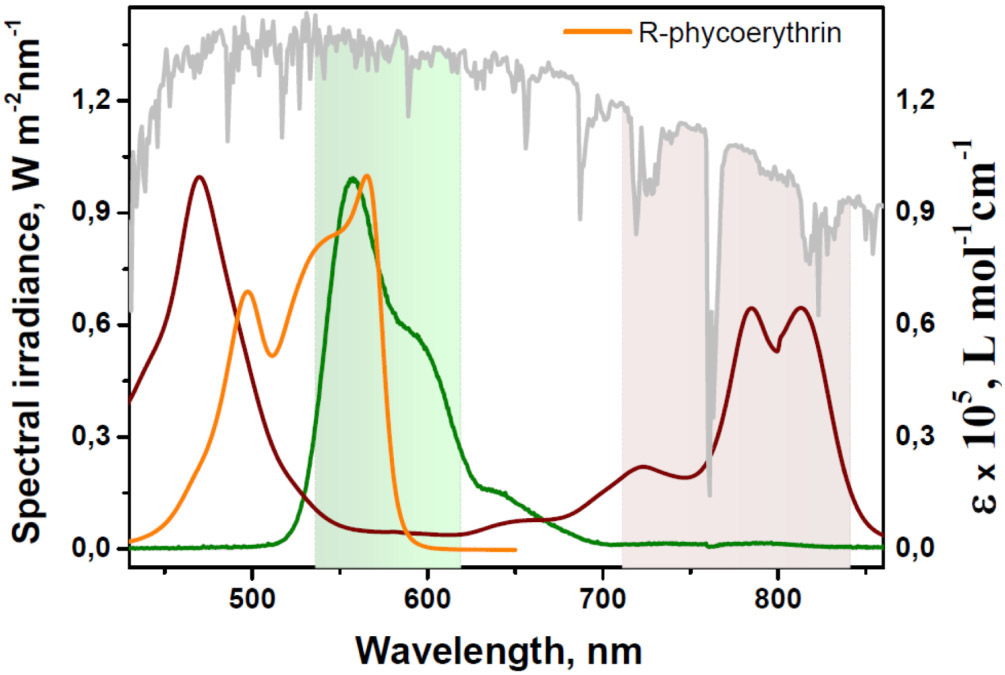 To investigate UC-mediated photosynthetic growth, we illuminated a culture of the cyanobacterium Synechocystis spec. through a UC device excited with 808nm light (1Wcm−2 intensity) for 8h periods over 5 days (see Figure 3). The absorption spectrum of Synechocystis spec. is shown in Figure 4(a). (R-phycoerythrin is part of the absorbing photosynthetic complex of Synechocystis spec., but there are other antenna complexes.) In addition, we kept a reference sample in the dark. A second reference sample was exposed to daylight during the periods of UC illumination. Analysis showed the bacterial population increased by a factor of 3.3 with UC light: see Figure 4(b). This was higher than the population increase of the sample exposed to daylight (2.4) and of the one kept in the dark (0.8). A series of independent experiments verified the reproducibility of the bacterial growth under UC light.

Figure 3. (a) Sketch of the experimental setup. (b) A photograph of a working UC device in aqueous media with excitation wavelength 808nm.

A principal conclusion is that the TTA-UC process can drive bacterial photosynthesis. We are now working to develop the practical use of this insight. Our main technological challenge in studying IR-driven photosynthesis is to develop an efficient and long-lived UC device, operating with low-concentration IR sunlight in a bioreactor with appropriate architecture. We are also searching for an appropriate bacterial culture that captures emitted UC fluorescence with higher efficiency compared to Synechocystis spec.