Drug delivery systems, which control the behavior of medications in tissues and cells, have received much attention as a method that maximizes therapeutic results with minimal adverse effects. One recent development in this area is the delivery of small interfering ribonucleic acid (siRNA) to targeted cells, which suppresses anticancer drug resistance, contributing to the treatment of refractory cancers. Such therapy uses two key methods of drug delivery: releasing medications around cells at a targeted site in the body (macroscopic delivery), and introducing the medications into a cell by increasing permeability of the cell membrane (microscopic delivery).

Femtosecond lasers, which have ultrashort pulses, are increasingly used for precise ablation of cell organelles and membranes. Perforating a cell membrane using a focused femtosecond laser enables the introduction of external molecules into a single cell without significant damage because the nonlinear optical interaction focuses on a tiny spot. However, such precise focusing prohibits treatment of multiple cells. To expand the capability of femtosecond laser technology towards both simultaneous treatment of several cells and selective cell targeting, we considered the use of transparent biodegradable polymer microspheres. Unlike other particles, these spheres can be broken down and eliminated by innate metabolic processes, making them non-toxic. 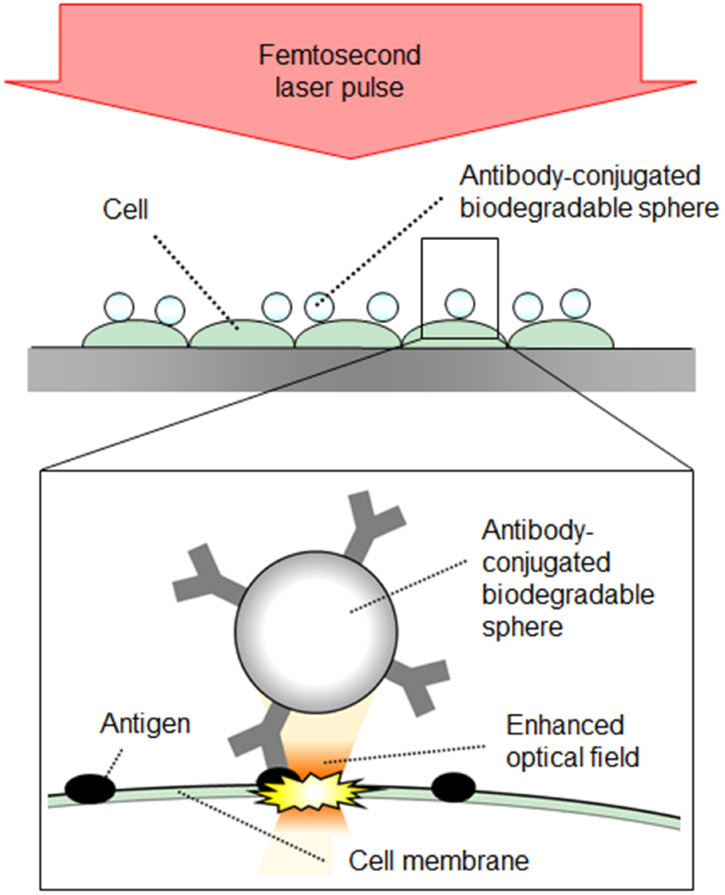 Figure 1. Conceptual diagram of biodegradable sphere-mediated perforation of a cell membrane using a femtosecond laser. The spheres are selectively conjugated to the membranes of targeted cells by antigen-antibody interactions. The sphere works as a microlens, and a femtosecond laser illumination generates a strongly enhanced optical field under the sphere to perforate the membrane.

Figure 1 shows a conceptual diagram of our proposed method for microscopic delivery.1–3 Antigen-antibody interactions selectively conjugate biodegradable microspheres to the membranes of targeted cells. The spheres work as microlenses, and femtosecond laser illumination generates a strongly enhanced optical field under the spheres to perforate the cell membranes. At the near-IR wavelength of 800nm, there is little linear optical absorption and scattering coefficients are relatively low. Thus, the interaction zone is localized in a focused spot and there is little damage to the cell. Figure 2 shows fluorescence and phase-contrast images of the cells after femtosecond laser illumination at a fluence of 1.06J/cm2. We weakly focused the laser beam on a spot size of 300μm (shown as the dashed circle in Figure 2) and illuminated the cells using a single shot from the laser. Many cells in the illuminated area showed fluorescence, demonstrating perforation of the cell membrane followed by the introduction of siRNA into multiple cells. The enhanced optical field is generated under the sphere conjugated to the cell membrane, therefore we can only selectively treat the targeted cells that express the specific antigen.

Using our perforation method, we introduced extracellular molecules into cells through the pores on the membrane. This approach can only be applied where there are molecules available in the vicinity of the cell, otherwise the perforation itself contributes nothing to the drug delivery. To enable a smart drug delivery system, we considered hollow microspheres for macroscopic delivery to release the molecules at targeted sites around cells using the interaction of a femtosecond laser and a polymer. In the last decade, hollow polymer microspheres have shown promise as candidates for smart microcarriers that respond to external stimuli—including lasers—to release embedded molecules. Since near-IR wavelengths can penetrate deep into tissue, lasers could potentially enable treatment at locations deep within the body. However, most polymers show little absorption of near-IR light, rendering controlled destruction of the capsules once they have been released difficult.

We have demonstrated localized perforation of hollow polymer microspheres using near-IR femtosecond laser pulses.4 The highly enhanced optical intensity can be generated at a spot on the shell of the sphere—see Figure 3(a)—which in turn contributes to localized perforation. Figure 3(b) shows scanning electron microscopy images of 1-μm hollow spheres before and after laser illumination. The exposure created a pore, smaller than the diffraction limit, in the sphere's shell. An enhanced optical field was generated in a localized spot on the shell of the hollow sphere, which resulted in multi-photon ionization and other nonlinear interactions, followed by the localized perforation of the hollow sphere. The laser's limited heat-affected zone maintained the spherical shape.

To the best of our knowledge, this is the first demonstration of the nanoperforation of transparent hollow spheres by a near-IR laser without doping with absorbing metals or dyes. Our method could enable controlled release of therapeutic drugs without concerns for potential toxicity caused by residual materials. In the near future, we aim to merge the two delivery technologies, macroscopic and microscopic, for smart drug delivery systems. We plan to investigate generating the enhanced optical field on the boundary of the cell membrane and the shell of the microcapsule conjugated to it by the antigen-antibody interaction. The simultaneous application of macroscopic delivery—releasing drugs from a microcapsule around the cells—and microscopic delivery—creating small pores on cell membranes to introduce drugs into the cells—could prove highly effective for smart delivery systems.

Mitsuhiro Terakawa received his BSc, MSc, and PhD degrees in engineering in 2003, 2005, and 2007, respectively. He is now an assistant professor in the Department of Electronics and Electrical Engineering. His research interests include femtosecond laser processing and its biomedical applications.