The exponential growth of data traffic in today's infrastructure will soon hit the limit of microelectronic circuits to offer enough modulation bandwidth at reasonable power dissipation. Light has an outstanding ability to carry information over large distances at very high data rates, and this has been gradually exploited for shorter and shorter communication distances. Photonics is now considered the answer to the power dissipation deadlock of very large scale silicon microelectronic integrated circuits. Silicon is thus set to become the common bridging platform between photonics opportunities and electronics maturity.1

In this context, the first demonstration of a CMOS-compatible vertical-cavity surface-emitting laser (VCSEL) source using a double set of silicon photonic crystal mirrors is a genuine turning point in the ongoing effort to bring laser technology to a silicon level of technological maturity.2, 3 First, this novel technology paves the way for a new generation of VCSEL devices that will undoubtedly result in fully successful replacement of current VCSEL photonics, given the possibility to perform very large scale integration by employing existing CMOS processing technology as well as high-throughput mass fabrication. Second, this new generation of laser sources extends the range of accessible photonic functionality far beyond the plain vertical surface optical emission offered by traditional VCSELs.

The electromagnetic distribution of optical modes accommodated by photonic crystal VCSELs results from the hybridization of a radiated component cycling between the mirrors and a slowly wave-guided component within them.4 Because of the dual nature of the optical modes, these devices serve as generic photonic building blocks: the manipulation of either or both of the components offers new routes to the design of devices with enlarged functionality.5 In CMOS-compatible VCSELs, the double set of silicon photonic crystal mirrors is fabricated by deep UV (DUV) lithography. We can directly manipulate the slow wave-guided component within the mirrors via the patterning of the mirrors' geometric characteristics. Here we concentrate on the control of the emitted optical beam, in the spectral (wavelength tuning) as well as spatial (beam steering) domains. 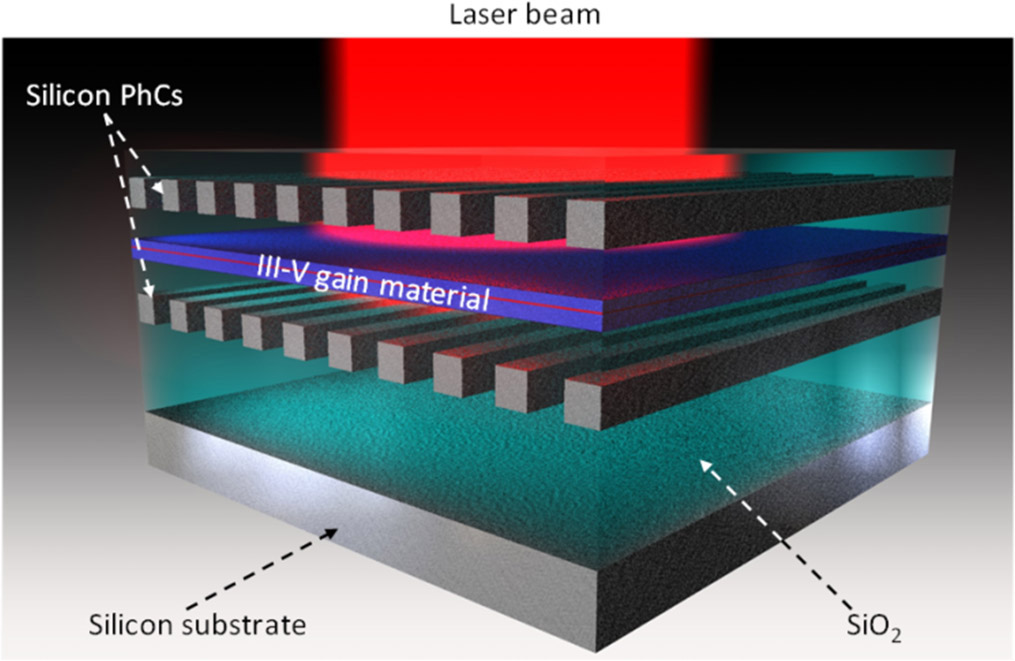 We used DUV lithography with an assigned pitch of 300μm to fabricate the mirrors. Photonic crystal period and silicon slit widths varied on the lithographic mask with steps of 10 and 5nm, respectively. We also adjusted the exposure-dose rate of DUV lithography to allow an even finer control of the silicon bars' width, which we estimate to be on the order of 0.25–0.3% of the photonic crystal membrane period. 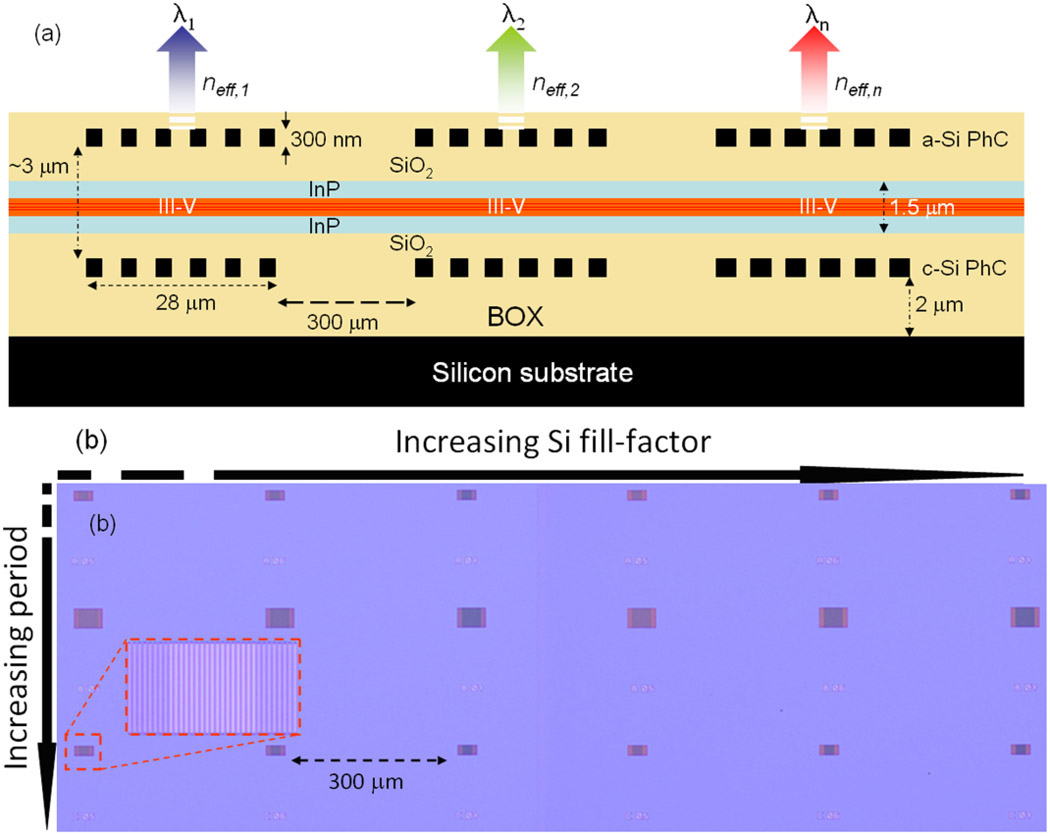 Figure 3 shows the 100GHz International Telecommunication Union (ITU) frequency grid, along with the acquired spectra of 16 double photonic crystal VCSELs on the array. We obtained a 12.3nm-wide tuning range, and the wavelength scaled approximately as expected, fitting very well within the ITU grid. Fluctuations from ITU frequencies are ascribable to the roughness of the mirror slits as well as minor variations in silica spacer thickness. The frequency mismatch between actual emission wavelengths of the array and standard DWDM frequencies can be bridged by slightly adjusting biasing conditions. And monitoring the bit error rate by smart transmission protocols at the receiver ensures against frequency-chirp-related cross-talk among devices on the array. 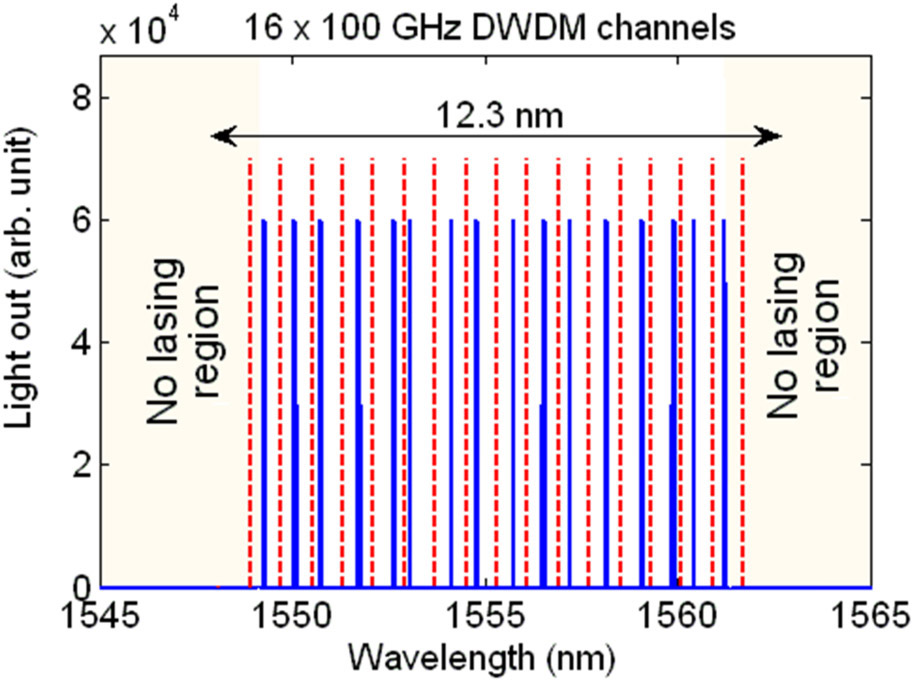 Angular resolution of the optical beam emitted by microlaser devices in free space has also received attention, especially in the VCSEL community. This desirable functionality provides an additional degree of freedom for controllable free space data communication. The approach currently considered the most promising consists in the coherent lateral coupling of microlaser cavities, tightly controlling the phase difference between neighboring elements. The phase difference is critically dependent on the rate of coupling between these cavities, which is difficult to adjust with classical VCSELs.8

To control the angular resolution, we propose a radically different approach based on specific strong coupling schemes of wave-guided modes in photonic crystal mirrors. This procedure allows for the generation of optical beams with an arbitrary angle of the far-field emission. Figure 4 shows simulations of the far-field reflectivity diagrams of two photonic crystal mirrors that have been specifically designed to operate along the vertical direction (left), and along an oblique incidence (right). For the latter, the reflectivity is highly directional, at an angle of around 45° off the vertical direction.

Figure 4. Far-field reflectivity diagrams of two photonic crystal mirrors specifically designed to operate vertically (left) or along an oblique incidence (right). The angular resolution of the emission can be fully controlled: the emission angle of the optical beams, as well as the degree of asymmetry, can be set arbitrarily.

In summary, the natural propensities of CMOS-compatible VCSEL devices using a double set of silicon high-contrast grating/photonic crystal membrane mirrors allow for a wide range of desired functionality. This includes fully controllable lithographic sizing of the resonance wavelength, thus allowing for the production of VCSEL arrays for wavelength division multiplexing and beam monitoring of the light emission. Our future work will concentrate on the design and fabrication of VCSEL devices provided with beam steering functionality, in collaboration with industrial partners and as part of French national programs.

The authors acknowledge funding from the European Commission within the framework of the European project pHotonics ELectronics functional Integration on CMOS (HELIOS) as well as from the Lyon Science Transfert consortium under grant agreement L1093.

Pierre Viktorovitch is emeritus research director at CNRS. His research is concerned with micro-optoelectromechanical systems based on III-V compound semiconductors, micronano-photonics, and III-V semiconductors on silicon heterogeneous integration.

Xavier Letartre is currently research director at CNRS. His areas of interest include the physics of optoelectronic devices, photonic crystals, and nanostructures for optical devices and circuits.

Badhise Ben Bakir's research interests focus on the physics of optoelectronic devices and nanostructures, as well as micronano-fabrication related to silicon and III-V semiconductor-based materials for optical integrated circuits.