The majority of solar cells that are capable of converting sunlight into electricity are based on crystalline silicon, which is an expensive material. While polycrystalline thin-film cells are cheaper to produce, they are often based on rare and toxic elements such as cadmium telluride or cadmium sulfide. The development of highly efficient thin-film solar cells from abundantly available and cheaper materials would allow for the greater use of solar energy as a renewable resource.

One such material is methylammonium lead iodide(CH3NH3PbI3) perovskite (the generic name for compounds that have the same crystal structure as the mineral perovskite) (see Figure 1). In the years since CH3NH3PbI3 perovskite first showed promise as an absorber for solar cells,1 the performance of perovskite-based solar cells has rapidly improved, even reaching efficiencies as high as 15%.2, 3 Most high-efficiency perovskite solar cells reported to date make use of a metal oxide such as aluminum oxide, titanium oxide, or zirconium oxide, all of which require a high-temperature sintering process. We have shown that a CH3NH3PbI3 perovskite layer sandwiched between two thin organic charge-transporting layers leads to a solar cell with high power conversion efficiency, or PCE (12%).4 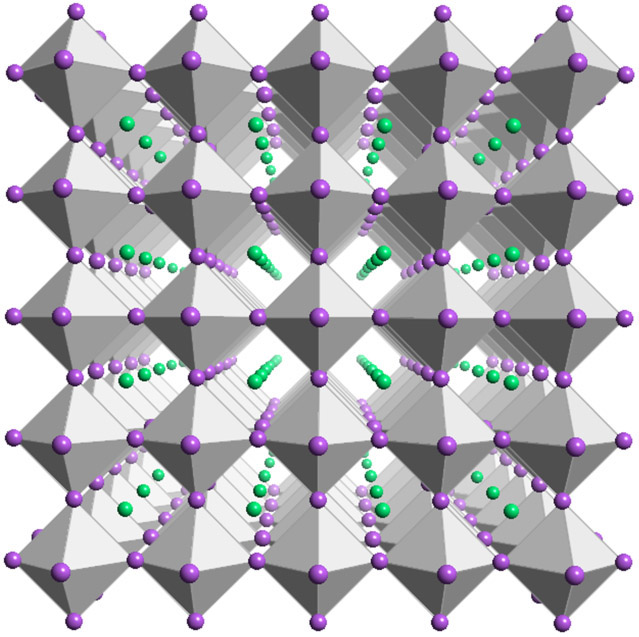 We prepared the CH3NH3PbI3 perovskite thin film by co-evaporating the two starting compounds, methyl ammonium iodide and lead iodide. The resulting films are pure and smooth with large crystal domains. To increase the photocurrent it was necessary to sandwich the perovskite film between an electron layer and a positive charge carrier-blocking layer. We used an arylamine-containing polymer (polyTPD) and [6,6]-phenyl C61-butyric acid methylester (PCBM) for these functions, respectively. The lowest unoccupied molecular orbital of polyTPD lies closer to the vacuum level than the conducting band of the perovskite, while the highest occupied molecular orbital of PCBM is further away from the vacuum level than the valence band of the perovskite. This means that these layers effectively block holes (positive charge carriers) and electrons, respectively (see Figure 2). We used a thin layer of poly(3,4-ethylenedioxythiophene):poly(styrenesulfonic acid) to smooth out the indium tin oxide surface that was used as the transparent bottom electrode. All organic materials were deposited using solution-based processes in ambient atmosphere.

Next, we sought to develop a flexible perovskite-based solar cell. Instead of using a glass substrate with the transparent conductor indium tin oxide, we used a polymer substrate with an- other transparent conductor. This other transparent conductor is composed of three thin layers: a layer of silver sandwiched between two layers of aluminum-doped zinc oxide (supplied by Fraunhofer-ISE) (see Figure 3). Due to the small substrate sizes involved in this approach, control over the organic layer thickness was less precise, which resulted in a device with a JSC, VOC, and FF of 14.3mAcm−2, 1.04V, and 0.47, respectively, and a PCE of only 7%.5 More important than the actual values themselves is the effect that repeated bending of the foil has on the device's performance. We evaluated this by bending the foils over a roll (with a diameter of 6cm) for up to 50 cycles and characterizing the efficiency at set intervals. We found that only a very small decrease in efficiency occurred after 50 bending cycles, demonstrating that the crystalline perovskites are compatible with roll-to-roll processing. 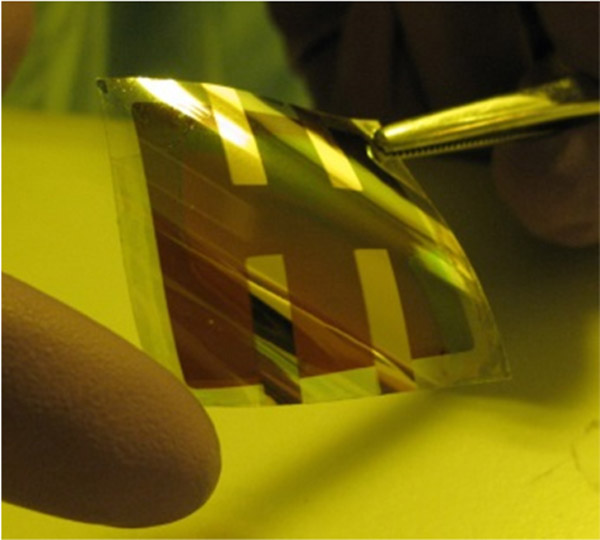 To conclude, we developed an efficient thin-film photovoltaic device based on a hybrid organic-inorganic perovskite using a simple device architecture, which is both n-type oxide and scaffold-free, coupled with easy room-temperature fabrication using low-cost materials. The efficiency of the cells with an active area of 1cm2 prepared on glass was close to 11%, while smaller cells reached even higher efficiencies of 12.4%. We also demonstrated that flexible devices where a polymer foil serves as the substrate can be prepared using the same processes and materials, thereby allowing for continuous production. Future work is focused on determining the stability of these novel devices and the preparation of modules. We believe that if sufficient stability is confirmed in these devices, they will have strong potential to rival established thin-film photovoltaic technologies.