Piezotronics for sensors and energy technology

Strain-induced polarization charges in piezoelectric semiconductors modulate the electronic and optoelectronic processes of charge carriers at the interface, opening up novel applications.

New technologies for developing electronics/optoelectronics with tunable functionalities and performance are critical to emerging applications in wearable electronics, communications, robotics, prosthetics, and biomedical treatments. For these applications, the active and adaptive interactions between devices and stimuli (e.g., from the human body) are essential. Although mechanical stimuli are ubiquitous and abundant in the environment for potential interactions with these electronics/optoelectronics,1–3 they are difficult to implement with conventional silicon devices.

The piezoelectric effect has been widely used for electromechanical sensing, actuating, and energy harvesting. Charge polarization occurs in response to mechanical deformation in materials lacking inversion symmetry. Conventional piezoelectric materials such as Pb(ZrxTi1−x)O3 (PZT) and polyvinylidene fluoride (PVDF) are insulating and hence not suitable for constructing functional electronics or optoelectronics. Because of this, the effect of mechanically induced polarization on charge carriers in piezoelectric materials has long been overlooked. Semiconductor materials such as zinc oxide (ZnO), gallium nitride, and cadmium sulfide with wurtzite or zinc blende structure also possess piezoelectric properties. However, they have relatively small piezoelectric coefficients and so have not been used as extensively in piezoelectric sensors and actuators.4 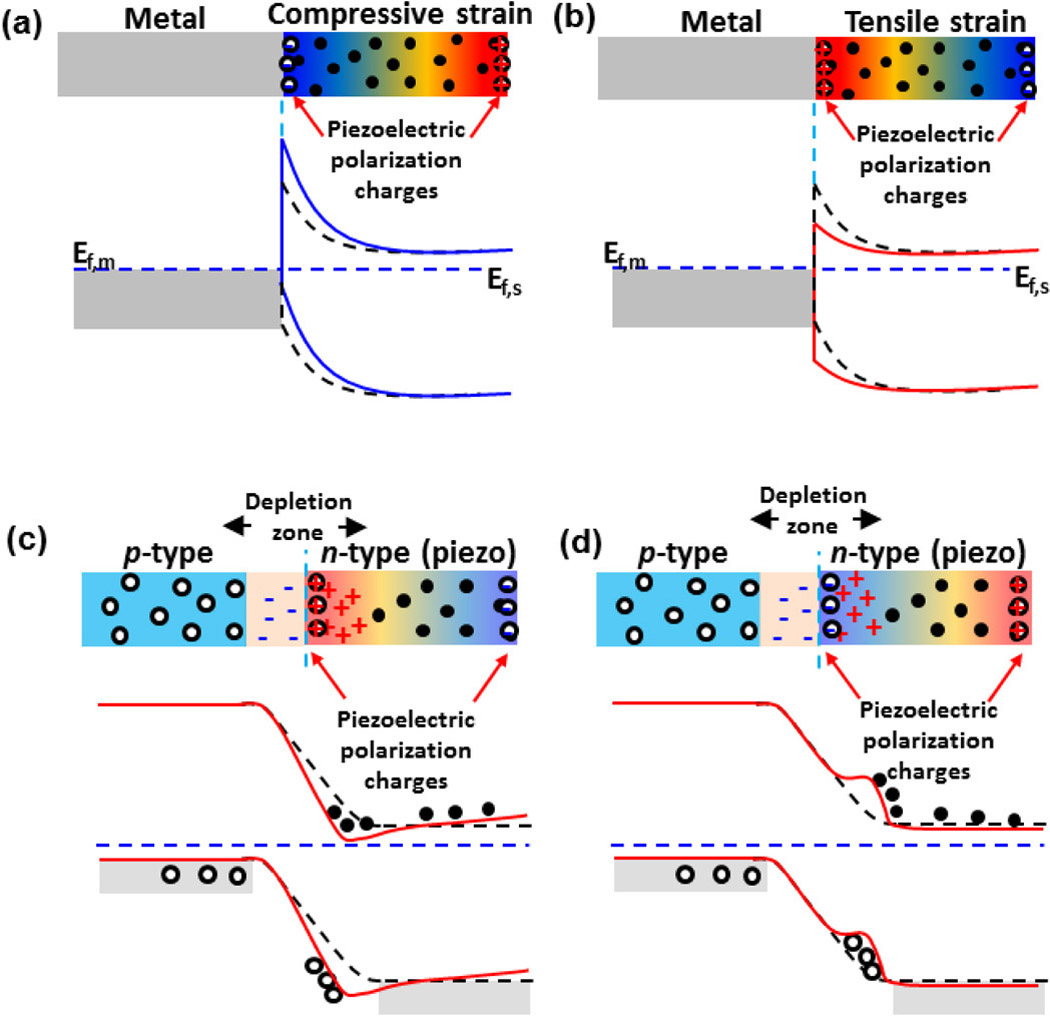 By replacing the external gating voltage with strain-induced polarization charges for controlling charge transport, we have developed two-terminal strain-gated piezotronic transistors.6, 7 More complex functionalities have also been developed following these preliminary demonstrations, such as strain-gated piezotronic logic nanodevices for performing mechanically modulated electronic logic operation. Another example is a piezotronic strain memory device with write/read access of the memory cell programmed via electromechanical modulation for electrically recording and reading out the logical levels of applied strain.6, 8

Eliminating the gate electrode in a piezotronic transistor enables novel 3D structuring. Using the piezoelectric polarization charges created at the M-S interface to modulate transport process of local charge carriers, we could apply the piezotronic effect to design independently addressable two-terminal transistor arrays. In this way, we converted mechanical stimuli applied to the devices into local electronic controlling signals. Based on this concept, we designed and developed a way to integrate circuitry of vertical ZnO nanowire (NW) transistors in 3D on a large scale (92×92 tactile pixels in 1cm2) as a flexible force/pressure-sensor matrix for artificial skin (see Figure 2).5,7 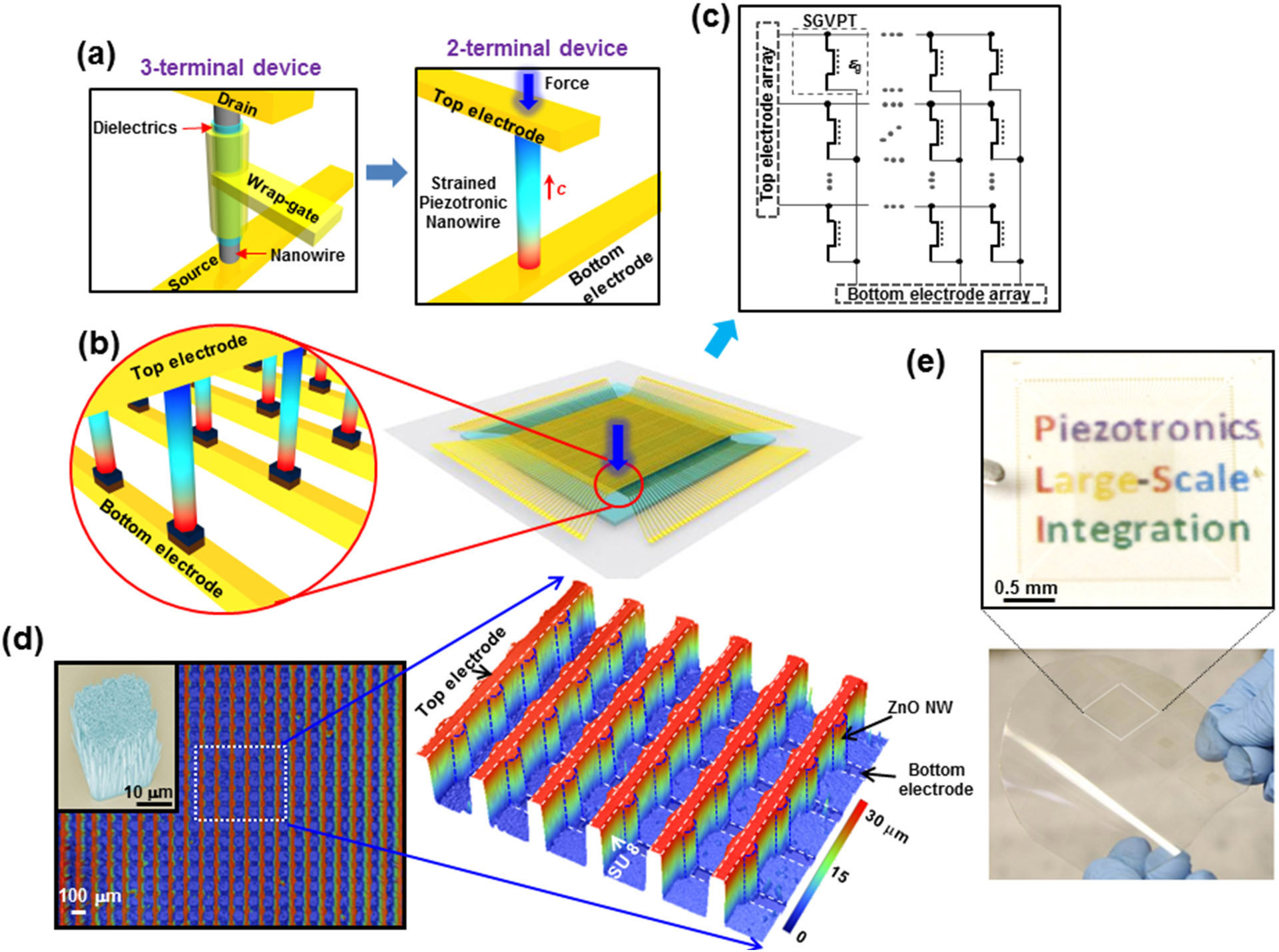 Figure 2. (a) Comparison of (left) a three-terminal voltage-gated nanowire (NW) field effect transistor (FET) and (right) a two-terminal strain-gated vertical piezotronic transistor. Zinc oxide (ZnO) NWs in the strain-gated vertical piezotronic transistor (SGVPT) grow along the c-axis, as indicated by the red arrow. (b) Schematic illustration of a 3D SGVPT array with tactile pixel density of 92×92 and scheme for spatial profile imaging of local stress (indicated by the downward blue arrowhead) by the array (zoom-in schematic). (c) Equivalent circuit diagram of the 3D SGVPT array. The region highlighted by black dashed lines is the unit SGVPT device, in which εg represents the mechanical strain gate signal and the vertical dotted line between the two terminals of SGVPT presents the modulation effect of εg on the conducting characteristics of the device. (d) Top view of topological profile image of the SGVPT array and, inset, 3D perspective view of the topological profile image revealing the vertical hierarchy of the SGVPT assembly in which the color gradient represents different heights. (e) Photographs showing the transparency and flexibility of the SGVPT array device.

Our artificial skin exhibits performance comparable to human skins. Its integration complexity, spatial resolution, and response are superior to any previous tactile sensing nanodevices. Remarkably, the strain-gated vertical piezotronic transistors have several unique capabilities not available in existing technologies. First, they can detect changes to the device shape in situ in real time and feed back the sensed changes to calibrate other system functions, for instance, for an artificial tissue or prosthetic device. Second, self-powered active tactile sensing emulates the physiological operations of biological mechanoreceptors, such as human hair follicles in the skin and hair cells in the cochlea and can stimulate neurons, for instance, for regenerative therapy in prosthetic skins. The mechanism is completely different from the piezoresistive effect (see Table 1). The change from a three-terminal configuration to a two-terminal configuration significantly simplifies layout design and circuitry fabrication while maintaining effective control over individual devices.

Table 1. Comparison of the piezoresistive and piezotronic effects.

The piezoelectric polarization charges can also control the charge separation, transport, and recombination in optoelectronic processes,2, 9,10 which is the piezo-phototronic effect. This effect enhances the performance of photocells,11–13 the sensitivity of photodetectors, and the external efficiency of an LED.14, 15 Furthermore, strain-controlled LED emission can be used to directly ‘image’ the force/pressure distribution on a device with micrometer resolution,16 by using strain-induced polarization charges to tune local light-emitting intensity from individual NW-LEDs. The 2D distribution of light-emission intensity then becomes a map of the pressure distribution on the surface (see Figure 3).5 This approach is novel in relying on the piezoelectric polarization charges for a stable, fast response and parallel-detection strain-sensor arrays. The output signal is electroluminescence, which is easy to integrate with photonic technologies for fast data transmission, processing, and recording, and may enable the development of highly intelligent human-machine interfaces. This may represent a major step toward on-chip recording of mechanical signals by optical means. 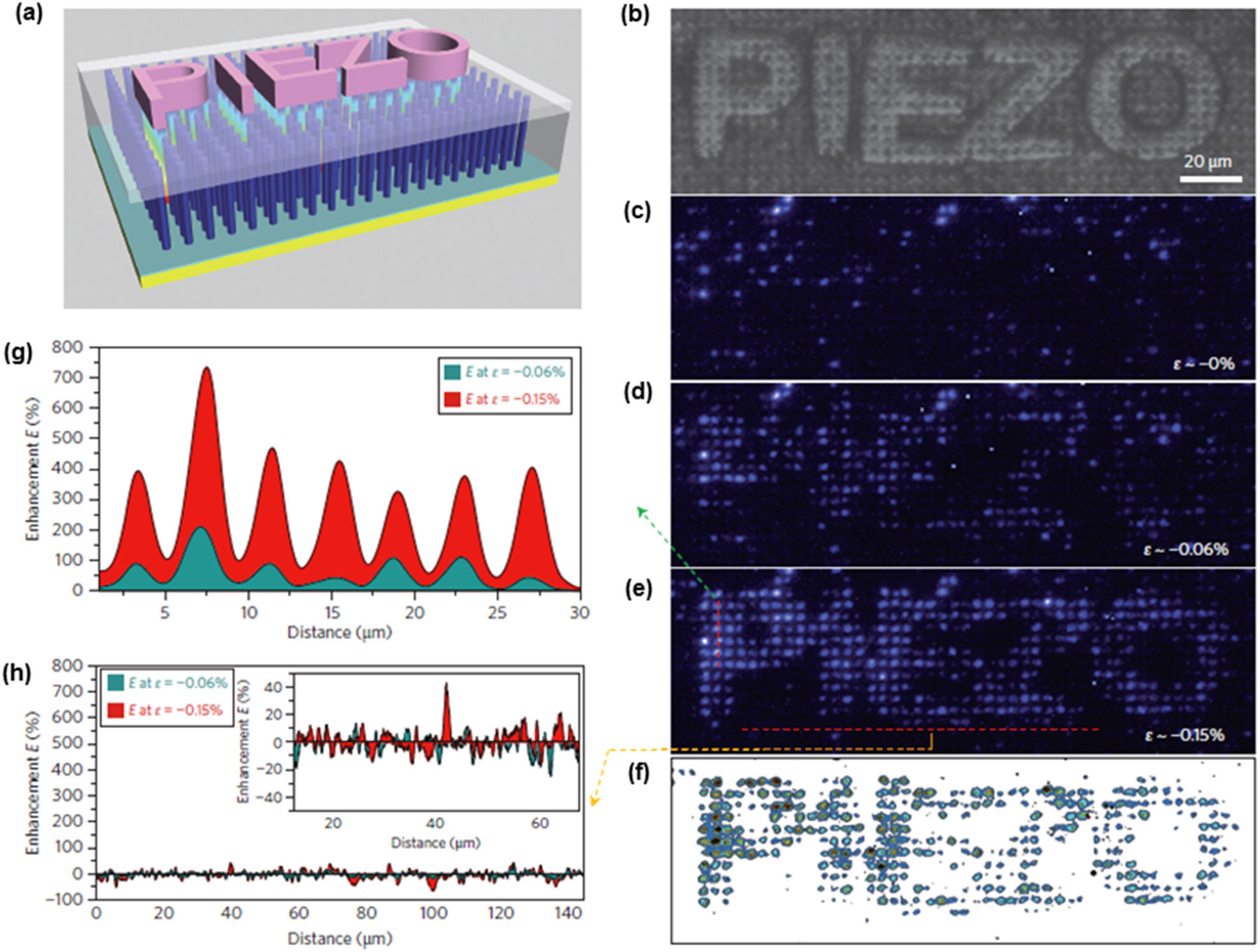 Figure 3. (a) Illustration showing the working process of pressure distribution imaging. (b) Optical image of the device with a convex mold on top. (c--e) Electroluminescence images of the device at strains of 0, −0.06, and −0.15%, respectively. The images clearly show a change occurred in LED intensity only at the compressed pixels. (f) 2D contour map of the E(x,y) factor derived from the LED intensity images shown in (c) and (e). It directly presents the word ‘PIEZO,’ as given on the mold. (g) Line profile data showing the signal-to-noise ratio (SNR) of the enhancement (E) factor for the vertical pink line on the molded pattern shown in (e). (h) Line profile data showing the SNR of the enhancement (E) factor for the horizontal red line away from the pattern shown in (e). For LEDs on the vertical pink line, their illumination is enhanced due to the piezotronic effect, as shown in (g). For LEDs on the horizontal red line, there is no enhancement in their illumination, as shown in (h).

In summary, the essence of the emerging research and applications in piezotronics and piezo-phototronics relies on the coupling between strain-induced polarization and semiconductor properties in piezoelectric semiconductor materials. Piezotronics provides a novel approach for modulating device characteristics by tuning the junction/contact properties. Until now, it was not possible to do this without modifying the interface structure or chemistry. We expect piezotronics and piezo-phototronics to enable technological advances in sensing, human-electronics interfacing, robotics, biomedical therapy, prosthetics, bioimaging, and optical microelectromechanical systems. Future work will include producing the tactile pixel arrays from single NWs instead of bundles to improve the sensitivity of the arrays by at least three orders of magnitude and integrating the arrays onto CMOS silicon devices.